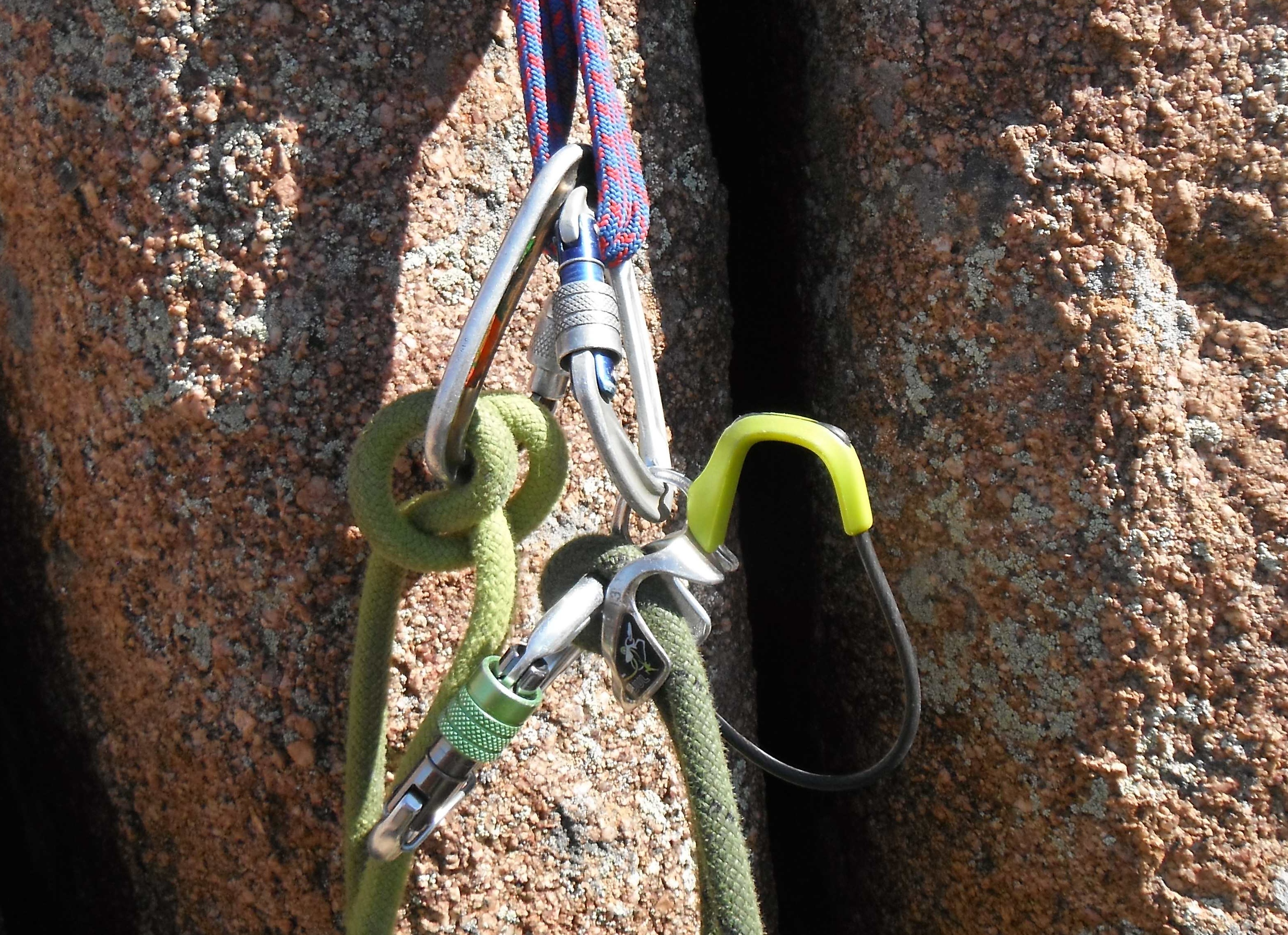 There’s always room for innovation in climbing gear, but I thought belay devices had been pretty well figured out. I clip my ATC Guide to my harness for multi-pitch ventures and keep my GriGri racked with my sport draws and that’s almost all I ever think about belay devices. The key is almost. 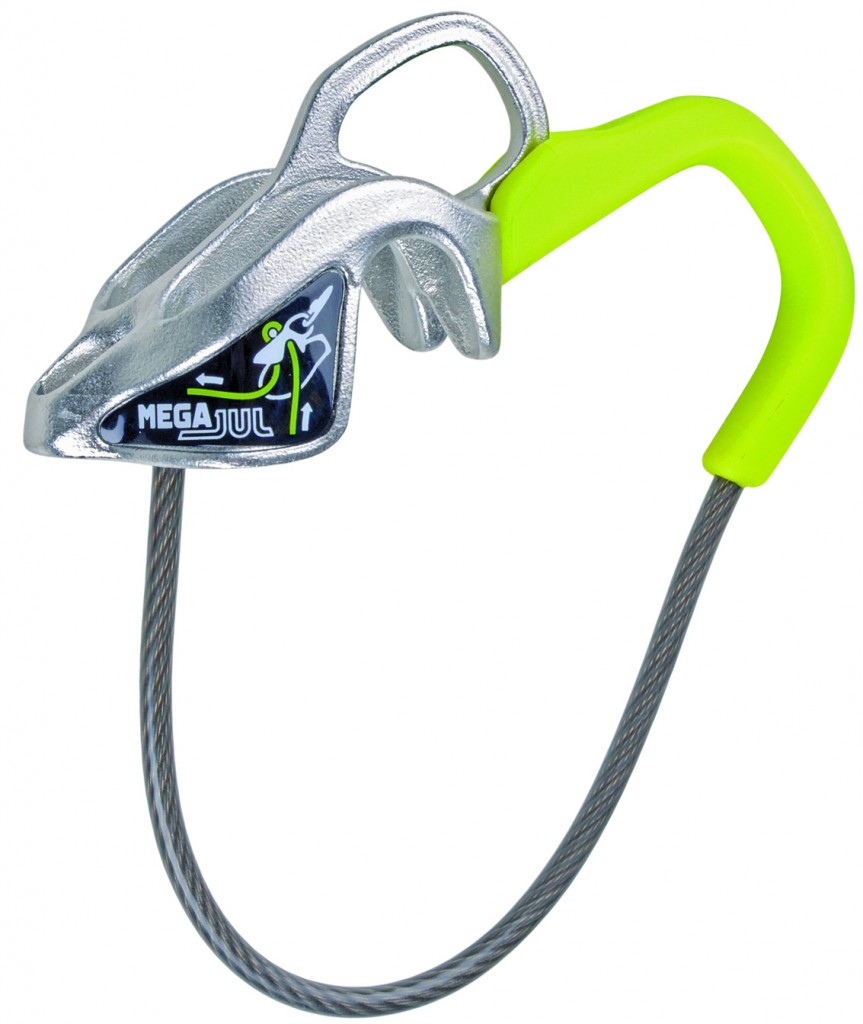 Times change and so do tactics; I’ve recently found myself eschewing the summit-by-any-means methods that defined my early climbing years and actually trying to free hard pitches on long routes, which can be quite satisfying but usually involves a lot of air time. When a buddy and I rapped into the Black Canyon to throw our best effort at Tague Yer Time this spring, we decided after some debate to bring an extra belay device—the GriGri—because an auto-locking device facilitates the belayer helping the leader pull back to his high-point. The scenario did indeed happen many times and the auto-locking device allowed efficient recovery after big falls.

Bringing the GriGri was an easy choice because we were dragging a 70 pound haulbag anyway, but would I bring it on a fast-and-light push with hard climbing? Seems like a lot of extra weight for a little convenience.

Enter the Mega Jul belay device. While we all thought belay devices had reached their evolutionary zenith, Edelrid was re-inventing the wheel and came up with a pretty slick new device that actually does more than any predecessor. The catch: it’s hard teaching an old dog new tricks, and having used the ATC Guide for so many years that I can basically rig it blindfolded, I encountered a steep, confusing learning curve with the new device. This new device is not the be-all-end-all, but definitely has its merits.

Light weight: “Dude, is that thing real?” was my buddy’s first reaction. Made of steel* instead of aluminum, the Mega Jul shaves some weight (10-15%) off popular tube-style devices, and weighs 61% less than the GriGri. Consequently, it is also freakishly thin. It is rated for rope diameters between 7.8mm and 10.5mm, covering most half and single ropes and all but the thinnest twin ropes. Belay devices by weight:

*Being steel, I expect this device to last much longer than its aluminum cousins. I wear out an ATC about every year, so this could be a very nice feature. 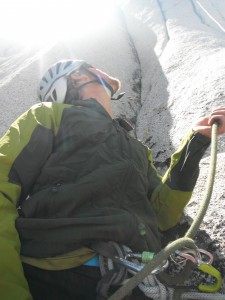 Reviewer Drew Thayer testing out the Mega Jul, and working on his belayer’s neck.

Like comparable advanced tube-style devices (e.g. ATC Guide, Reverso), the Mega-Jul functions for belaying a leader, belaying one (or two) followers directly off the anchor, and rappelling. There are notable differences in each function, with varying degrees of complexity.

Definitely the most exciting feature. Positioned with the green thumb loop away from the body, the device will catch and hold the rope after a strong tug from above. (Keep your break hand on, of course). This allows a belayer to effortlessly hold a hanging climber and facilitates the jump-and-catch method of pulling a leader back up to his highpoint. I’m now using it at the sport crag like a GriGri. And just like a GriGri, the device will also lock up when you feed slack quickly (leader pulls slack to clip) so this requires a special technique. Luckily, the quick-feed technique is easier (and less dangerous, I think*) than the GriGri: with my right hand on the brake strand, I keep my left thumb in the green thumb loop and press up to hold the device open momentarily for feeding slack.

*I think it will be harder for an inexperienced belayer to drop someone with this device than a GriGri, because it seems to take more muscle to hold the Mega Jul open. I haven’t tested this, and I’m not about to volunteer…someone with a test dummy should investigate…

Belaying followers off the anchor:

The main drawback of this device, for two reasons. First, there is more friction while bringing up two seconds than an ATC Guide, which just creates extra work for your arms and back. Also, in this mode you have to rig the device with the rope-loaded carabiner on the OPPOSITE side from the thumb loop, which is the reverse of how virtually all other tube-style devices are rigged. The result is that I rigged it wrong over and over again, and after a month or so of use I still need to focus hard to rig it right the first time. Other reviewers have experienced similar difficulties (see http://www.rockandice.com/lates-news/edelrid-mega-jul-review), and most climbers will likely encounter this problem as well.

This is almost a game-changer. The idea is really exciting, however in practice it doesn’t work consistently enough to use, which for climbing gear is anything short of 100% of the time. The Mega Jul can be used to rappel in two ways: like a standard tube-style device, in which it functions about the same as an ATC Guide and requires a backup friction hitch for redundancy, and in an auto-lock mode which will lock on the rope unless the user disengages the device, effectively eliminating the need for a backup friction hitch. To disengage the device, you’re supposed to be able to clip a thin carabiner into the smaller attachment point and use the biner like the lever on a GriGri to control descent. This is a brilliant idea, and you can find videos of people doing it online, but I’ve tried countless times and can’t get the device to reliably un-lock with the ‘biner-lever method. The only way to un-lock the device was to push my thumb out and up in the thumb loop, but my hand was pumped silly after rapping 20 meters so this method seems useless.

When Edelrid updates the design so it works well, this could be a major bonus for rappelling tactics. It is probably a question of mere millimeters of steel. Until then, however, I’ll use it in standard tube-mode.

The Mega Jul is a cleverly designed belay/rappel device that can do more than any other device and weigh less at the same time. With all its impressive abilities, is this device a game-changer?

It’s tempting to think so. I’m using it at the crag like a GriGri; it not only performs the same functions, but it’s easier to keep it from locking up while feeding slack. And since it weighs 61% less than a GriGri and can be used to rappel as well, I won’t hesitate to use it on a hard multipitch when I want a device that auto-locks while belaying a leader. Additionally, this device offers the unprecedented option for auto-locking on a two-rope rappel, eliminating the need for a backup friction hitch.

Belaying a second in auto-lock mode, the device must be rigged “backwards” from what we’re used to. -Thayer

That being said, the Mega Jul can be rigged in so many configurations that it is pretty confusing to use at first, and the learning curve is long. I still need to stop and think to rig it for bringing up a second, and for all of us who’ve been belaying with tube-style devices for years, it’s really easy to rig it wrong, which is dangerous. The question remains: while leaving the car for a big alpine day, which device is on my harness?

I know that no matter how faded I feel from the fatigue, dehydration, and stress that we have to deal with all too often in the mountains, I can rig my ATC Guide correctly. Sometimes “keep it simple” is the best strategy. I’m enjoying the convenience and versatility of the Mega Jul at crags and multi-pitch outings, but I’ll wait to be more familiar before taking it into serious situations in the mountains. Will it be dangling from every harness in five years? Time will tell, but I’m looking forward to putting mine through the wringer.

We found this video on the Mega Jul to be quite helpful.