Dreaming, Waking, and Remembering What Matters by Drew Thayer

In May 2012 I leaned against the rail of the overlook on the North Chasm View Wall on a balmy afternoon, staring into the dizzying expanse of the Black Canyon of the Gunnison. The view from the overlook is dramatic enough to inspire vertigo in the stoutest of hearts; overhanging rock drops away from sight and the wall comes back into view some thousand feet below, then continues near-vertically to the jumbled chaos of boulders and scree bisected by the raging Gunnison River.

I had just climbed The Cruise with two new friends, and we had found the classic route pretty cruiser, topping out casually in the early afternoon. Staring into the wild gulf of air carved by the river over eons, I felt a mixture of pride and humility tinged with the dark shades of fear. Pride because we’d rallied a grade four route up a steep wall in good time and generally enjoyed ourselves; humility because I knew The Cruise didn’t even ascend the tallest part of the North Chasm View Wall; and fear of unknown possibilities: there were routes directly beneath us of an entirely different character, routes that I knew would require much more than I could give. I couldn’t know it then, but I would venture closer to the edge of that unknown horizon, and seven months later the airy steeps of Stoned Oven would force me to take a harder look at myself than I’d bargained for.

We looked across to the attractive South Chasm View Wall and I could make out the salient features of Astrodog, which I’d climbed the year before. To our surprise, we watched a climber move right from the two-boulder bivy—away from the obvious crack systems of Astrodog—and begin ascending a seemingly blank face. Where was that guy even going? We tried to see his line, but couldn’t make out any features. Someone had binoculars and we passed them around, trying to spot a crack system, but from that distance all we could see was a man moving upward into a shield of blank, smooth granite. I imagined we were witnessing some ridiculous aid ascent, a steely-eyed fiend hooking his way up intermittent nubbins. 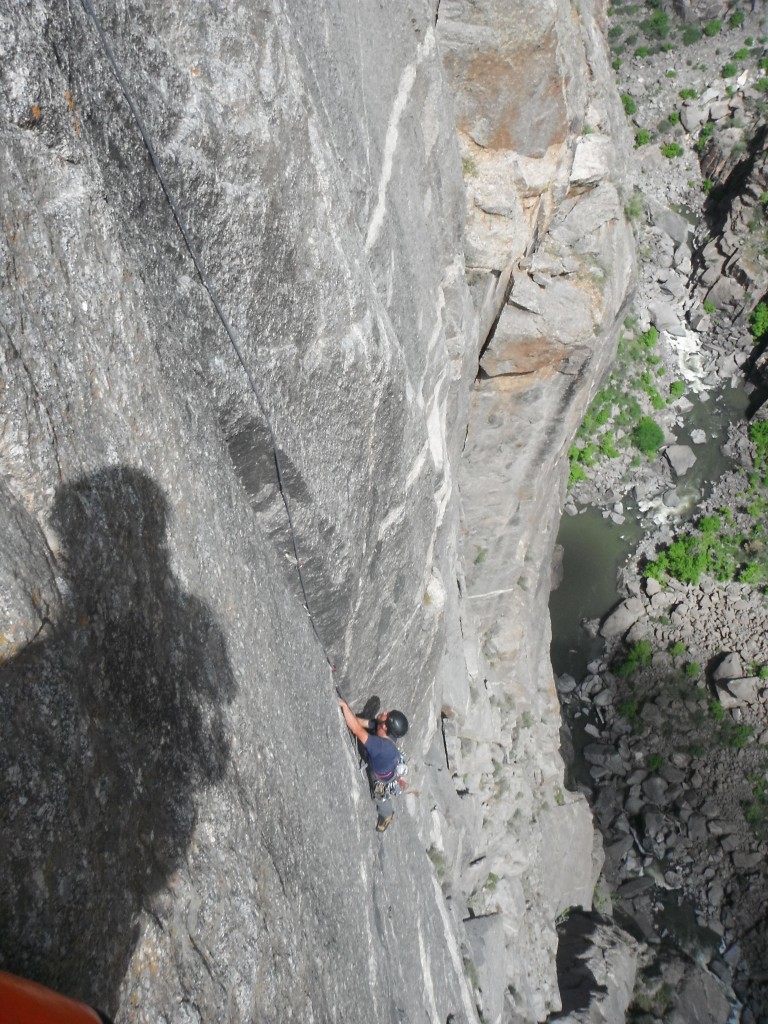 Some research revealed the existence of a route up that clean face, a hard FREE route in fact called Tague Yer Time, which involves sustained 5.12 climbing up thin seams. I poured over the description on Mountain Project and remembered the chilling awe I felt watching that climber across the canyon. It was a ludicrous quantum leap beyond my abilities, but a seed had been planted; when I day-dreamed about the canyon, the name of the route drifted around the edges of my thoughts like quivering pine needles at the periphery of vision. I heard the whisper but focused on the world in front of me: life and love and trying to redpoint 5.12 on bolts.

Upon returning to the Colorado western slope this spring, I was beyond excited to join my good friend and fellow adventurer Rowan Hill in driving over Red Mountain pass through gorgeous mountains toward the Black Canyon of the Gunnison. During the midst of a New England March, while I was worn down by differential equations, incessant rain, and no way to scratch my itch for climbing rock, Rowan sent me a few topos of routes in the Black; among them was Tague Yer Time. Of course I knew about the route and had drooled over the description on Mountain Project, but I had calmly set that book on the upper shelf of “in a few years.” After all, the Donahue-Ogden masterpiece sports 5 pitches with 5.12 climbing, two of them sustained tips-crack dihedrals. I hadn’t yet redpointed the .11+ routes I’d attempted in the canyon, so solid 5.12? Out of the question.

I’m a collector of maps and guidebooks. I think there’s something to be said for holding a topo in your hands. If you want to summit a peak, buy the map and hang it on your wall; if your goal is a climb, pin photos above your bed and pin the topo in the kitchen. There is magic unleashed when we give our dreams more substance by pushing them into the tangible world as intentions.

That topo, which represented the idea of climbing a route as hard as Tague yer Time, spearheaded a new motivation to train. I did my coursework efficiently so I could hit the climbing gym three times every week; I started climbing routes twice without rest to build endurance; I worked four-by-fours on the tweaky boulder problems until my fingertips stung. In bad weather I would enter the Lysol-spandex-top-40 aura of the university gym and submit myself to punishing workouts with weights and a ludicrous device called the elliptical trainer, with no other rationale that the ability to keep pushing while my lungs burned and my body wanted to collapse would be a good card to have in my back pocket. An inspiring British climber Dave Macleod says you have to be willing to train the capacity to try hard. He climbs E11, so I figure his advice is worth something.

We trained hard, we made our preparations, and on a warm morning in May I tossed ropes from the Astro-Slog rappel anchor and began rapping into the canyon with a haul-bag dangling from my waist, something I never really envisioned doing. We were amped to spend two days giving our best effort on a beautiful route in the wild canyon, and even more psyched to be joined by our buddies Nick and Tucker, who planned to drop in for breakfast the next morning on their way down to climb The Flakes. After a day of hard, fun climbing we settled into our spacious ledge bivy and watched the Chasm View Wall turn golden in the sunset. We woke to a glorious morning, stretched on our mid-cliff perch, and served up coffee and cinnamon rolls (a bit soggy, unfortunately, due to technical stove failure) just in time for Tucker and Nick to drop in for a bite. As he’d promised, Tucker reached inside his pack and pulled out a ripe juicy grapefruit. Luxury in the middle of Colorado’s scariest canyon! We were stoked beyond belief, and our energy carried me straight into a punishing encounter with the crux corner pitch, which involved much desperate groping and multiple whips on RPs. 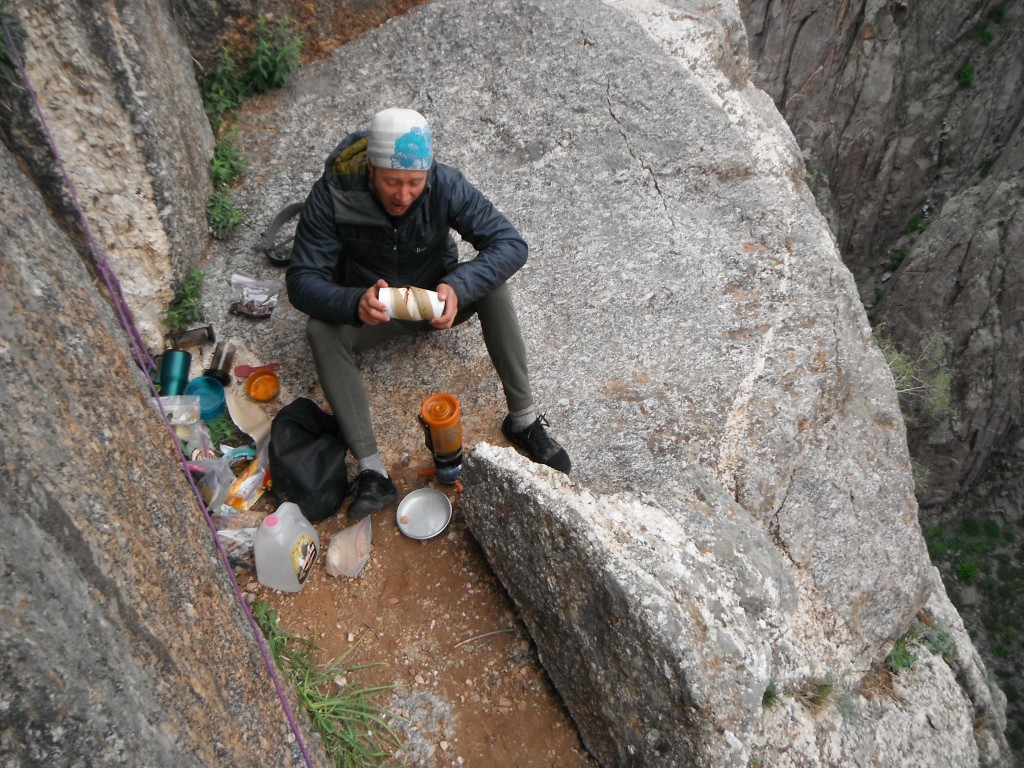 I could write about how rad it was, how awesome it was to spend such a focused time in sync with a good friend, how it was to transcend my personal limits in such an inspiring arena. And although we didn’t send the crux pitches, it was transcendent for us. We each lead hard pitches at our limit, and for the first time ever I lowered off, pulled the rope, and tied in for a redpoint burn in the middle of a wall.  On the sustained crux corner, stemming at my limit long enough to precisely place a tiny micro-nut and then launching into another 5.12 boulder problem forced me to dig deep into my mental and physical reserves and represented the culmination of five years of dedication to the art of climbing. But all that was just fun and games, what really mattered was late that night, staring down into the darkness of the canyon searching for lights, then waking the next morning at dawn to frost on my pillow and thinking immediately of those guys. We threw our sleeping kit into the car and raced off to the rim, ready to rap down and fix lines, ready to do anything to find our friends. The boys hadn’t made it up that evening, and The Flakes is a long, serious route, and it was a cold night. 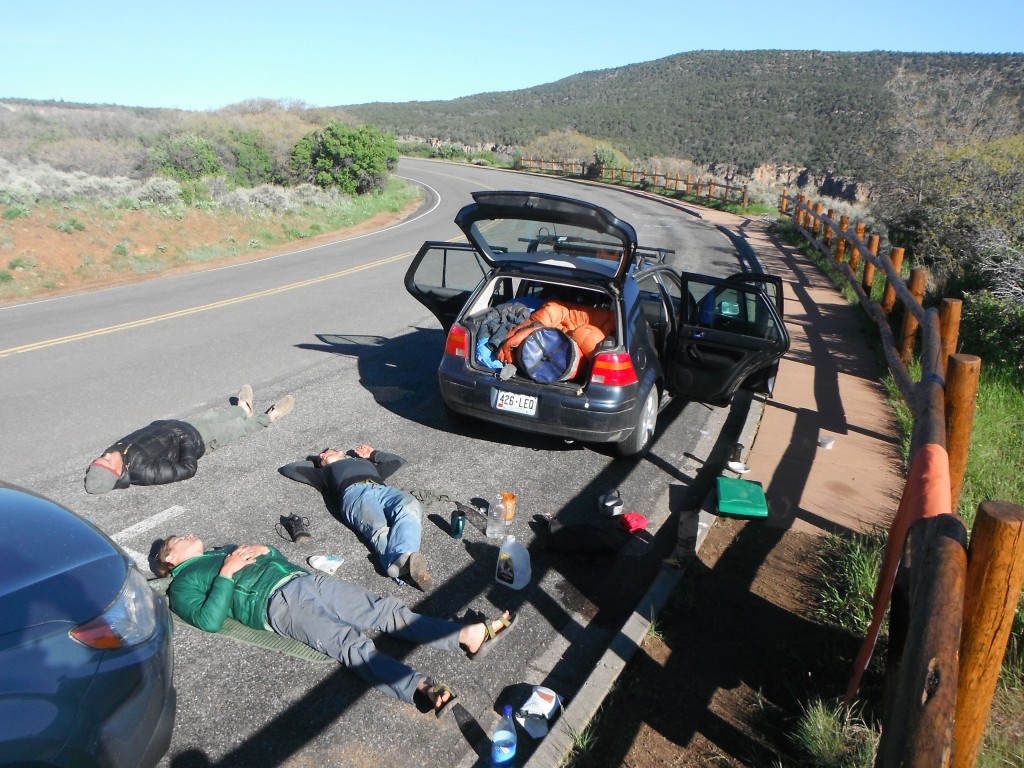 A fine display of well earned rest after the mighty Black Canyon.

Pulling my sore body over the canyon rim has been a cathartic experience on every climb I’ve completed in the Black, but despite all the terror and doubt I’ve felt on my own journeys, the relief was far greater as we ran through the bushes and saw our friends topping out just after dawn. Their faces were flat and their eyes set in the thousand-yard stare, the sign of true and utter exhaustion. Slowed by the afternoon rain, they’d done what they had to do, moving slowly and safely through many of the route’s difficulties in total darkness. It wasn’t pretty, but sometimes success isn’t. And in the Black, success is often simply grabbing the soil on the rim and belly flopping on sweet flat ground.

It’s so good to remember what really matters: the people we share the journey with. Send or dangle, crush or epic, style only matters to a limited extent. We can set external standards to measure our exploits by, but what is it that actually endures in our hearts? Soon all memory of the climb will wax to a rosy hue with the inexhaustible march of time; it is the people we share our stories with who will always matter the most.