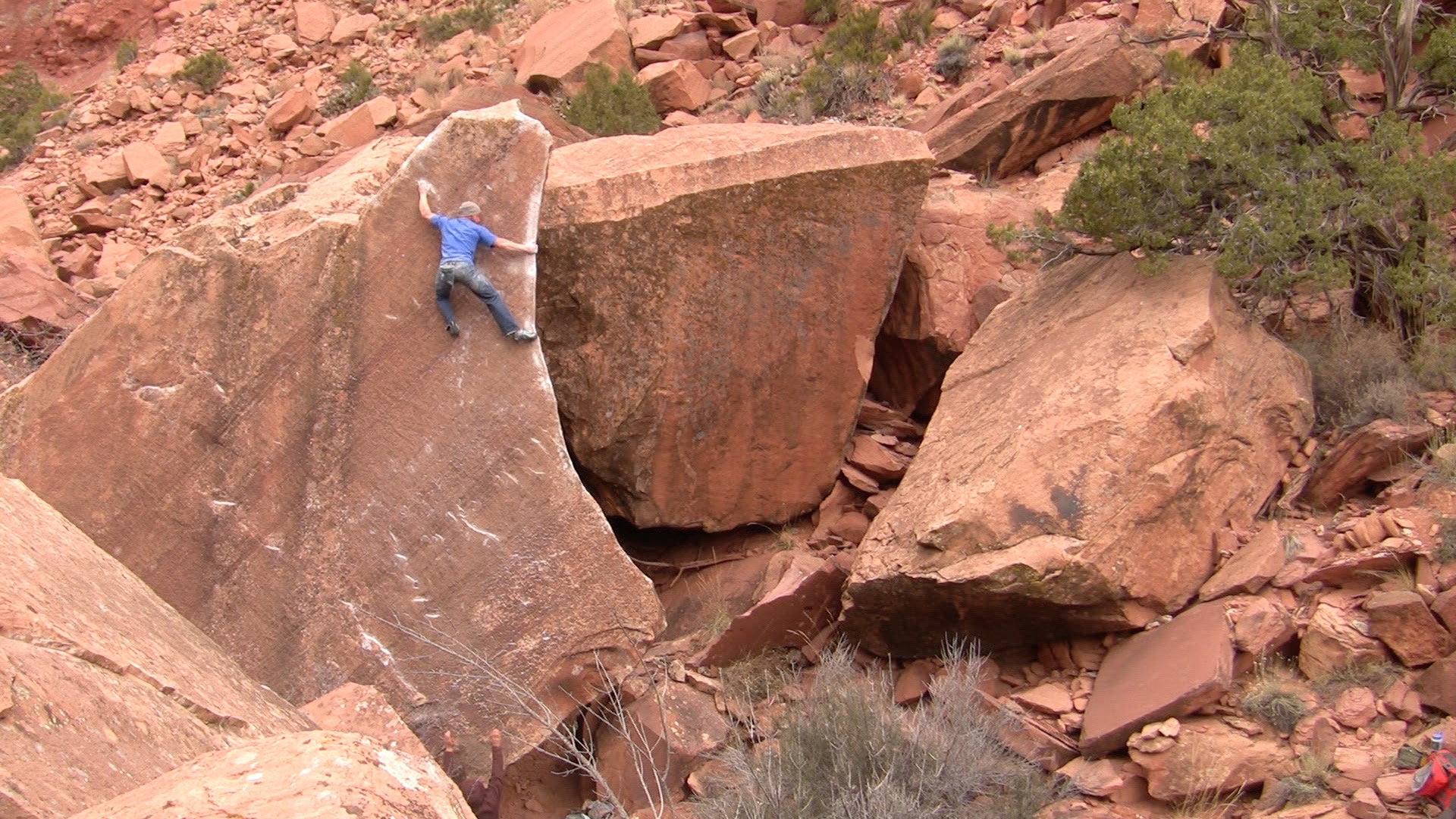 It starts with a plan like a break in the clouds. We set out thinking on the lines, the foods, the sunrises and campfires, the saving up. And then you set to with the forty-second aspen tree planted that day, the twenty-third special with sauce on the side, the eighty-first stone laid, the fifteenth pair of rental shoes sprayed and returned to the rack. We set out running by the time we’ve finally got the car packed, forgetting who-knows-what-you’ll-wish-you-had (read: propane) that puts a pinhole in the fiscal bucket that should hopefully carry us through the season. Weeks and months and a thousand specials, stones, shoes later: the drive, the flight, the list, the campsite just right, the first foray out to the warm-ups, and the first pulls on what will be The Work.

Standing there in majesty, straining against the earth like a dog at leash, wanting to play and tussle, it very likely wants to savage you, hurt your feelings, kill you, change you, body and mind, for the rest of your life. So you run for it, straight at ’em, screaming entreaties: change me! Make me the person I will be after I complete this task: one who is surely different, more satisfied with life, respected by friends and enemies, equipped for more like this. Hurry up and allow me to forge myself as if by magic into the person I want to be while I ignore the very heat of the forge and the hammering I give, and take. Let me collect you, and so gather up all the energies and calories and emotions funneled into you like myriad rocket fuels. Let it be equitable. Let it be reciprocal. Please give me back what I put into you, my investment. Please give me the dividends of experience, confidence, and strength. Don’t be a waste, you bastard! What am I doing with my life, my time, you bastard?! Oh thank you, thank you, you magnificent bastards! To every split tip and permanently swollen knuckle, every dark and weathered day trapped in the car, every moment of toil to earn the money, health, happiness, determination, outside influences…thank you!

Sent projects are enemies turned to loyal friends. You can’t force a friendship; you can only balance the ingredients with care.

Today it snowed in a circle around me, which isn’t unusual here. We always joked that The Creek has a blue eye, looking out over the valley at the edge of the canyons and the plain, while all around the weather tumbles: flakes and drips and cloud-capped peaks. How? How does this wind scour out grooves and arches in the red rock but leave the low and out of season blossom behind? How do eggs remain in their swaying treetop nests? How do these aged and spreading trees stand in shaded clumps along the waters here, plump or desiccated by turns of season and geography, wide at the base where they swell from the ground, spindly at their growing ends, plunging toward and piercing the earth again where the fringe of their wide skirts finally touch back down. How did that huge and desiccated tonnage of Cottonwood branch hanging over my tent for weeks with one lone leaf like a rattlesnake rattle decide to come crashing down when I decided to return to the world?

It’s what happens. As soon as you deal with things that happened, you can more easily accept what is happening, which is where you work, and rest, and play, and wait. What will happen next is anybody’s guess, but with what was behind you fortifying what you do, a foundation is laid for the future. Which is just dealing with whatever happens. Listen for a clock, a tick, and know when the chime sounds just for you. Maybe it’s because for me, everything has to be done just right, and the weather and moon and place in orbit around the sun must be just right.

Stories play through the night to keep out thoughts and wind and bird shot hail. Shifting from one side, ouch, that’s the bad shoulder. Two posterior labral tears, lots of scar tissue. Had to sleep on one side for seven weeks in Fontainebleau once. Chewed on one side of my mouth for four weeks when a wisdom tooth split in Switzerland, once. Every meal, every day. I’ve lost sleep in the deserts of Utah, California, and Texas, thinking about the moves and the weather. That circadian displacement seems to float to the other side of the world, and so in winter, I don’t sleep much. I think, read, drink up, and curse the biphasic mitternacht. Or I shut it out with books on tape: Hesse and Mann and spy novels and fantasy and languages I attempt to learn by immersive repetitive exposure. I watch movies back to back, and make drinks to make the lightning mind syrupy and content, ’til the jam jar I drink from goes to a dry, sweet scent that trails into morning coffee. I run an ancient iPod on lowest volume through the earbuds next to my head, and the sensible and educated British-English voice of Steven Briggs assures me that, at least in a weird world populated with impossibilities made likely, the sun will rise again come 8:14 a.m. and light the candlestick tip of North Six Shooter, burning it down to the puddling pile of talus cone and crossing the creek to pour over the cliff top a frothing rapid having run the river rim. The dawn light fuzzing the top of the tent is plainly as they say it is: particle and wave, feathery and tumbling dusty in the icy air, and the sunshine finally falls upon me, and I feel its reassuring weight.

Now a push. Coffee. Cawing crows. The sunshine fills my tank slowly, refueling from a long stretch of restraint.

That is a distorted mind, I promise. In this life, I’ve gone broke dozens of times. Broke my body, broke with family, friends, jobs. Broken holds that delay the FA. Broke trail through snow three miles deep to break a borrowed shovel on the early spring top out. Broke a sweat carrying out the rat-eaten remnants of somebody’s poorly stashed pads. Broke rocks and stacked ’em up at the trails in the Buttermilks, the Happies, the Tanks, Joe’s, Squamish, The Creek, and at a southeastern climbing area pretending to be a golf course. Fixed broken brakes in the Hueco Rock Ranch parking lot after the ’roo rats chewed through the lines. Been on summer break for ten years.

So you can be damned sure I’ll wait awhile after a rainstorm so I don’t break a classic. You can bet I’ll break a new crack in my ass rather than turn the outdoors into a gym by building a huge platform under every kinda tall problem I find. You can be abso-fucking-lutely positive I’m not gonna break a hold with tools and the intent to make it better for me.

For some reason, we gotta go over this stuff every few years. For some reason, people are wrecking Vegas boulders still, wire brushing soft sandstone slopers until they make edges, and putting the limits of their life decisions above the very element they claim to love. People still plug cams into Fingers in a Lightsocket hours after a rain, fiddling in lobes between the blown-out scars of pulled pieces. People still tap-tap and gouge away at granite blocks up twelve thousand feet in Lincoln Lake or on the side of the road at Little Cottonwood. Somebody chipped edges into the aged slopers of some of Fontainebleau’s most hallowed lines rather than learn the subtleties of masterful movement.

This rock has sat here for time we can’t fit in our limited noggins. All that you could ever put into it is not a thousandth of a blink in its life. It’s not a reality that can be adjusted to your desires. Have some respect for that wide prairie of time.

Who the hell do you think you are?

Who do you want to be?

Yesterday, I was close. The GoPro forgotten, iPhone froze to death. Almost sent. Frustrated, sick of the struggle of muscle against bone and skin and rock and the same same same same same night, same morning, same walk, same…

I climbed the Thing.

A moment later, it began to snow.

And it was perfect.

Chris Schulte has been on a weird vision quest for over twenty years, one of those where you’re not sure if you’re on the right track, but then suddenly, it’s wide and easy and opens up to one hell of a view. 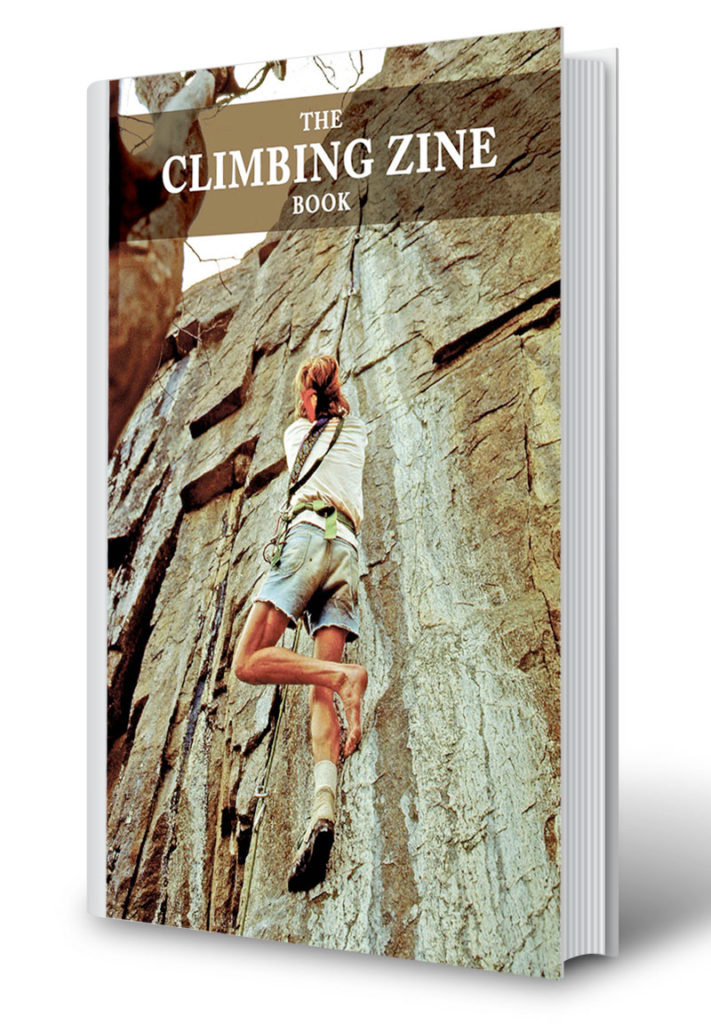