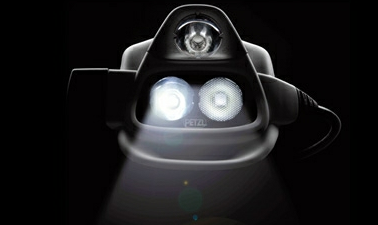 The new Petzl NAO hints at the headlamp of the future, but the cost will have to go down before most climbers will want to buy one.

I was first introduced to the NAO (Retail: $175.00) at the Winter 2012 Outdoor Retailer show, and it seemed intriguing enough to field test for a review. Its “Reactive Lighting” feature has a sensor that adjusts the light level based on how much light it is exposed to. The lithium battery can be recharged in any USB port, and it also takes AAA batteries. The lights are LED and definitely are plenty bright enough for any situation.

Those are the technical details, here are my thoughts from testing it out:

First of all this headlamp is futuristic and powerful. I liked the USB feature that allows it to be charged on my computer, and an easy to read battery indicator that lets you know the level of charge. It took me awhile to figure it out, but AAA batteries can also be used in place of the rechargeable battery. With so many features this is by far the techiest of all I’ve seen.

I used it for night climbing a few times and it worked great. The power of the LED lights is intense, and could illuminate any feature that was necessary. It did feel a bit heavy on the helmet though. (A belt feature allows the NAO to be stored on the waist to reduce this weight, or keep the battery warm in colder conditions.) While testing the NAO I felt it would work great in rescue situations when a bright light could really be necessary. For the climbing I was doing at night it didn’t really seem all that necessary though.

While I had the NAO to test out, often I felt myself using a standard run of the mill headlamp for climbing use. The NAO is very bright, but typically I don’t feel the need for such a bright headlamp. With the weight of it, I often opted to leave the NAO behind and just use a standard headlamp.

All in all, the NAO is a top of the line product, and functioned well when I used it. I would consider purchasing a NAO-mini if such a headlamp was available; something with similar features, but much lighter. Petzl is onto something, but for a dirtbag climber such as yours truly to want one of these the price and weight would have to be reduced. 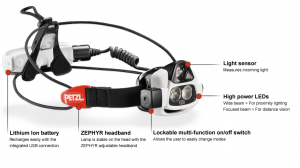 For more information about the NAO, visit the Petzl website: http://www.petzl.com/us/outdoor/headlamps/nao/nao-headlamp