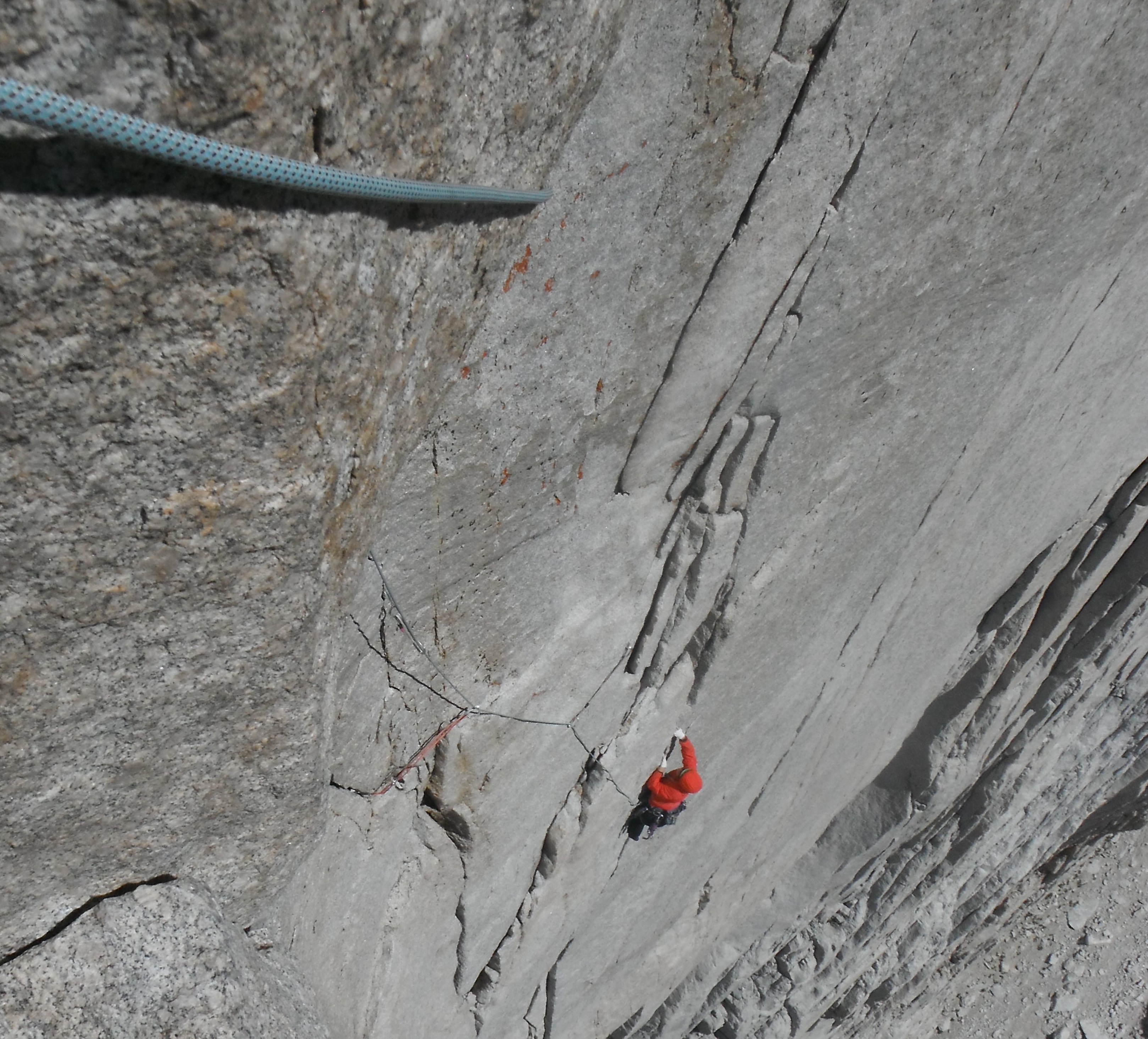 Light is Right! is the new slogan for today’s alpinism. We pare down the grams in our clothing, sleep systems, and carabiners…but is it worth going light on a rope? After all, the rope is the major non-redundant link in the belay system; if you’re a climber, you probably trust a rope 100% with your life, on a weekly to daily basis.

8.6 mm: one of the world’s slimmest and lightest triple-rated climbing rope.

The Corbie from Edelrid. Taking “skinny ropes” to the maximum, or minimum if you will.

When I was a young skittish climber, a mentor once told me, “when you’re starting to sketch out on lead and worry about falling, say to yourself ‘ropes are f#$%ing strong’. And do the move”. This turned out to be great advice, because it’s not just a calming thought, it’s true. Ropes are stupendously strong; the tensile strength of even the slimmest twin rope can take much more than any force we will exert on it in climbing. The caveat, of course, is that ropes can cut on edges, or when hit by rockfall, and this is why ropes rated for single use have typically been in the 9mm – 11mm range. Thicker ropes are less likely to cut.

When I started climbing around 2007, we all had 10.2mm single ropes. They were durable and confidence-inspiring and a chore to pull up and clip 40 meters up a pitch. I remember my uncle brought a new 9.1 mm Beal Joker on a backcountry climbing trip and it was a very ‘new school’; in fact it was hard to trust the thing after learning on his 11mm museum pieces, but it was much nicer to carry on long approaches.

In the past decade, advances in the way manufacturers weave their ropes have dramatically increased the cut resistance** of dynamic climbing ropes, and this has allowed for a generation of slim single ropes ranging from 8.9 to 9.6 mm. It’s interesting that these new light ropes have become popular in two distinctly different user groups—elite sport climbers and high-level alpinists—for different reasons. Light weight is attractive to sport climbers because they’re trying to gain every advantage to redpoint ridiculously hard routes, and on any well-designed sport route, edge-cutting risk should be extremely low. In contrast, alpinists admit that basically anything can happen, so many opt for a light rope to decrease effort and increase speed, therefore increasing their chances of success.

The recent emergence of ‘triple-rated’ ropes is a quantum leap in rope technology. These ropes can be used with twin, double, and single technique, which make them incredibly versatile and can apply in a variety of situations. Hard redpoint, ice climbing, wandering leads, big walls with long rappels, light-n-fast pushes in the mountains…these ropes can do it all.

What does this really mean? Hiking into a backcountry climb with a 70m rope, you could carry a 10.2 mm Maxim Glider or an Edelrid Corbie and a sleeping bag for the same weight, and a 9.4 mm Sterling Ion weighs the same as a Corbie plus a Jetboil and fuel canister.

Edelrid applies ThermoShield, DryShield, and ProShield coatings to the Corbie. Every manufacturer has their own fancy names for the coatings they apply to the sheath and core fibers of their ropes. Coatings increase durability and can make ropes water-resistent (essential for ice and alpine climbing). Which company has the best treatments? Comparison is subjective from casual observation, but for what it’s worth the Corbie seems to have excellent durable water resistance, solid sheath durability, and stiff handling compared to similar triple-rated ropes.

Edelrid’s recommendation: “Not suitable for working routes or top roping when used as single rope”. ‘Nuff said. This rope is specifically designed for low-fall-probability long routes or infrequent well-rehearsed redpoint burns. NOT a cragging rope.

In my interpretation, this rope is a great tool for multi-pitch outings where you are moving fast and are counting on the leader basically sending, i.e. a low probability of large, repeated falls. By my reckoning, this is a very common scenario: most intermediate rock climbers I know do not go try 10 pitch routes near their redpoint limit. If you’re going out to cruise a classic, why carry a heavier rope than you need?

Bottom line: Triple-rated ropes are a game changer. If you climb big routes in places where speed matters, I recommend you invest in one (or a set of) lightweight triple-rated ropes. Edelrid, Beal, and Mammut are currently setting the industry standard for these new ropes. Edelrid offers two top-of-their class ropes: by the numbers, the Corbie is only slightly lighter (1 g/m) than the Swift, with small tradeoffs in elongation and impact force that you’ll probably never notice. Is the Corbie worth the extra $20? Do you want to have the very best, or just really really good…?

I was psyched to take a 70m Corbie into the Sierra backcountry this summer to climb the classic Positive Vibrations on the Incredible Hulk. I was confident I could climb it with minimal falls and we wanted to pack light on the hike in, so it was the perfect application for the Corbie. I must admit it was a bit ‘thrilling’ to look down at a ton of exposure with just this thin line waving in the wind below me. The route’s crux, despite being only .11a, is the final sequence of a 40 meter sustained pitch, and I was getting gripped. I was setting up for an improbable move when a though of the skinny rope gave me pause. I took a breath, set my feet, thought “ropes are f#$%ing strong,” and lunged for the jug.

*If you care enough about the statistics and want to see the full nerd-out spreadsheet of rope parameters, feel free to email me at drew@climbingzine.com. Seeing ropes compared against each other on the same page can help a buying decision.

**Resistance to edge cutting: The jury’s out on this one. Many manufacturers claim “new edge cutting resistance” or something like that, but this doesn’t mean much. The UIAA tried to implement an edge-cutting test into their mandatory testing of ropes, but they abandoned this certification process in 2004 because the test was statistically unstable, i.e. there are too many variables to make a repeatable, standardized “edge cutting test” with consistent results. Very rare rope-cutting incidents DO happen and bring this issue into the spotlight every few years, and no paradigm-shifts in rope technology have resulted. Subtle advances have allowed manufacturers to produce thinner ropes, and these ropes are performing well, with no increase in rope-cutting incidents. Thousands of ropes continue to bend around thousands of edges while catching falling climbers, and most of us just pull back up and keep going.