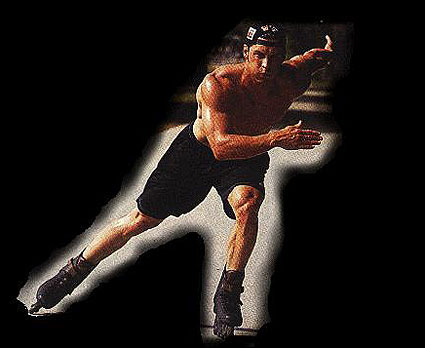 The older you get, the more you realize how precious life is, and the more you appreciate the little things. And sometimes the universe just throws you a little gift, a little nugget that makes you say, “Yes, today is a good day to be alive.”

This is exactly what happened the other day. I don’t know if I was down in the dumps or not, or if it was one of those days I was just being mechanical, going through the motions, but I needed a lift, a boost.

It was a cool autumn day and I was walking through the Fort Lewis College campus, over to their library to drop off a couple of my books that they’d purchased. I was dressed like most people were on a brisk fall day, wearing pants and a light jacket.

All of the sudden a rollerblader, daintily clad in nothing but short shorts and sun tan oil comes out of nowhere, and speeds by the crowd. Wow! Thank you universe, I said to myself. That was the pick me up I needed, I haven’t seen anyone that stoked on rollerblading since I was a teenager.

Why are human beings so weird? I really don’t know, but I do like to make fun of them. It’s a pastime, and if making fun of people is wrong, I don’t want to be right.

Lately I’ve been working out at the gym. I’ve had some overuse injuries from climbing, and haven’t been able to do it, and obsess over it as much as I normally do, so I’m switching it up. My friend showed me a workout routine of hers, and it keeps the blood flowing, and makes me feel good.

Gyms are funny places, a mix of folks trying to maintain the fitness they have, those trying to shed a few pounds, retired folks keeping at it, and then you have the gym guys. Some rarely ever smile. They are very serious.

My favorite part about the gym guys is not the extreme exertion, the yelling and grunting with they pump their iron, it is the strut, sometimes accompanied by a very unique kind of heavy breathing. First, they lift the weight. While everyone else is doing a mild workout, keeping the background noise to a minimum, out of nowhere there is this noise. It sounds like a mixture of someone giving birth and reaching a masochistic form of orgasm. While, I’m putting a 15 pound weight in the air that barely effects my breathing, these guys are going for it!

They lift the weight, and then comes the strut. It’s led by the chest, with them looking in every direction with their short necks to show, I am the alpha male in this place.

Then the breathing, is he struggling to breathe, I wonder? Because the only other creature I’ve heard breathe like this is hog I took care of on a farm one time. Should I call help, grab someone’s inhaler and hand it to him? No, he appears to be fine, this is just his thing. And, now after many trips to the gym, it’s all just part of the experience.

I used to be one of those people that was threatened by muscle men. I’m an averaged sized guy, with only slightly bulging forearms from years of climbing, something that might be as silly as weight lifting. But, later in life, I’m not threatened; I respect anyone who has passion. That’s what’s missing from modern life, passion! On a daily basis I see so many people who don’t have it. That “same shit, different day” mentality. This is it, this is all we have, it’s going to be gone soon, seize the day, the moment, but I digress.

Okay so by now I’ve pissed some readers off, you’re a rollerblader, or a weightlifter and I’m exaggerating and playing on stereotypes. Maybe you’re a weighlifter who rollerblades to the gym? That would be siiiiiiiiick. Can you please call me and let me know so we can workout together? But, now for balanced journalism, I need to turn the tables on myself.

I’m one of those “gluten-free” people. It took me a while to realize it because I was too busy making fun of the gluten free craze. Then, shit, I realized I am in fact, sensitive to gluten. It makes weird things happen in my stomach, and I fart in my sleep, which is no good.

Now, all of the sudden I have to ask weird questions in restaurants, and I feel like one of those people that orders triple soy, non-fat, pumpkins spice lattes. I’ve worked in the service industry off and on since I was 16, and the last thing I ever want to be is a problem customer. But there I am, asking if they have gluten free bread, or if I can get my salad without croutons.

Good news is there are options for us. But they are tiny. A gluten free sandwich can usually fit in the palm of your hands. And when you order gluten free bread, they are smug and say, “You know it’s really small, right?” Yes, I know, I say shamefully and then eat my mini-size sandwich and feel inferior.

Luckily there’s gluten free beer too. Sure its like $11.69 a six-pack for no justified reason, but it’s beer, and like Ben Franklin once said, “Beer is proof that God loves us and wants us to be happy”. So apparently God still loves gluten free beer lovers as well.

While I’m addressing my own shortcomings, let me drop some knowledge I learned the hard way: showering is awesome! When I was 20, I used to be a hardcore hippie-dirtbag and only showered when I wasn’t really high. Which was like once a week. And I gained a reputation for it with the ladies. My friends that were girls talked about it amongst themselves, something I learned many years later after I changed my ways.

I know, you’re in college and you moved to Colorado and you smoke weed 24-7 and you have a hemp necklace. That’s great. But why not hop in the shower every day? It feels so good, and you can even get some of that Dr. Bronners soap, fair-trade certified, which will make you feel even better. If there’s one modern technology that is accessible and underutilized by hippies and dirtbags everywhere it is the shower. Just try it.

Gosh, I feel like I’m just getting started. There are so many other things I wanted to address: sagging with skinny jeans, stocking caps in summer, and the overuse of the word “like”. But, um, like, I’m running out of time and words and I need to get to the gym. Now, where are my rollerblades?

Mehall is the publisher of The Climbing Zine and the author of Climbing Out of Bed. His next book, The Great American Dirtbags is due out this December.

The Climbing Zine Volume 5, The Dirtbag Issue is available in print and on Kindle. Free shipping is available for the print version.

Birthing Into The Climbing World
January 6, 2013