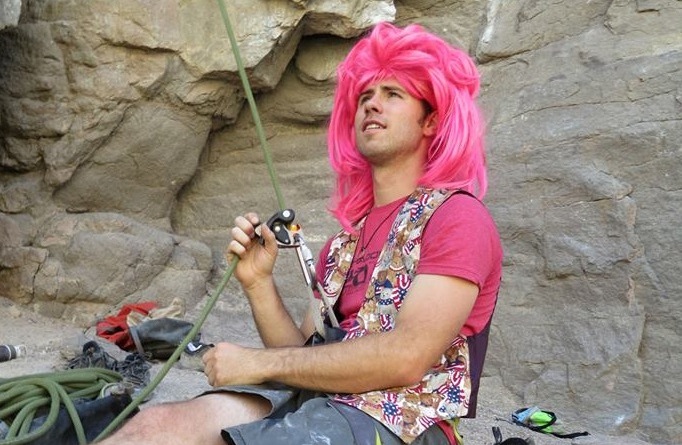 A few weeks ago we posted Jugs on Jugs by Gaelen Engler, a very popular and shared story about her search for female climbing partners. Now, we turn to the opposite sex, for a little in-depth look at the increasingly popular bromance. Enjoy.

“Love alone is not enough for anybody” – Edward Abbey

Romance is an essential part of life, the story of the world revolves around it, and many great men have fallen to their knees for a beautiful woman, and vice versa. Love makes us strong and it makes us weak. Thus, there are thousands of novels about it, and even an entire genre, The Romance Novel. I want to take it one step further, and introduce The Bromance Novel.

As I’m writing this, the computer program is underlining bromance, not recognizing the term. Silly computer. It’s okay though Microsoft Word, bromance is a relatively new concept, and I forgive you. 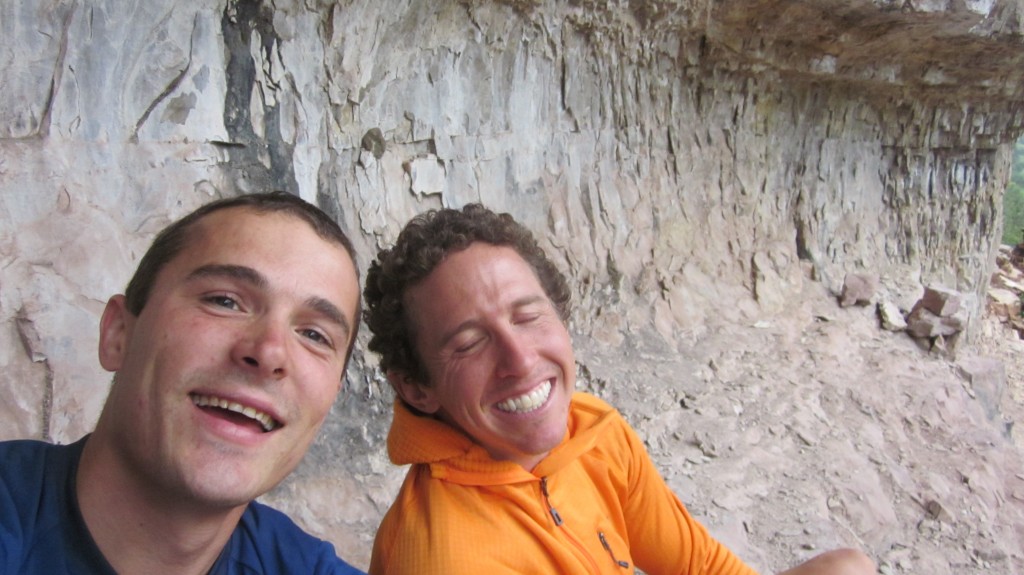 Bromances are beautiful because you can have many of them at the same time. No one is going to get jealous. You could start a bromance on the trail, at the bar, or even on the street. It’s a connection thing: the recognition that you are a dude and so am I, as pure as the kid looking for someone to play with in the neighborhood. We men are simple creatures, and unlike a romance, your potential partner in bromance isn’t likely to analyze you to no end upon meeting. He just wants a buddy, and you can never have too many buddies. 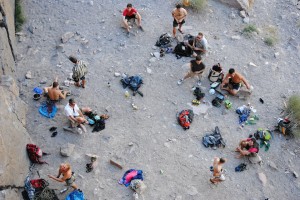 A couple weeks ago, fresh off of a breakup with my last girlfriend, I was in need of some serious bro time. Fortunately, three of my best buds were in need of the same. It was Tim’s birthday, and a Sunday, which is the day we try to set aside to go running for our unofficial and nonexclusive Sunday Running Club. An unusual morning rainstorm was ensuing, but instead of bailing we rallied and headed up to the mountains.

We packed up my Subaru and drove towards Engineer Mountain, our objective for the day. Tim was turning 37, and he wanted to commemorate the day with athletic feats, plus a multitude of high-fives, which I’ll get into here shortly. Long gone are the days of binge drinking to celebrate birthdays, we prefer endorphins.

I swear my car already started to smell the minute four dudes packed into it. We’d yet to break a sweat, but somehow an air of dude overcame the entire confines of the Subaru. On the drive up, we chat about our relationships, and offer advice. Most are on the prowl, while I’m reeling from a breakup. My homies hear me out, and I appreciate them for that. The bromance meter is ticking up.

The rain continues to pour. We could bail, but the bromance level would dip down, so we throw on some rain jackets, strap up our running shoes, put our man pants on and start jogging up.

The rain alternates between drizzle and downpour, yet we march on. We speak in the language of bromance: shouting, laughing and farting. An hour into the run and we are close to the summit. Two weeks ago we were shut down by bad weather, and it happens again. It was not our day for the Mighty Engineer Mountain. Jonathan has summit fever but we talk some sense into him. “It’s not a time for heroics up here buddy,” Al says, persuading him to go down by sweet-talking him into getting some grub at our favorite breakfast joint. 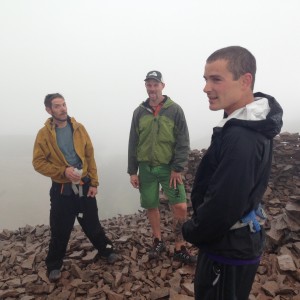 (L-R) Tim, Al and Luke basking in the bromance photo by Badger

Back in my car we are muddy and sweaty, and the stench of my car already equals a weeklong road trip. Ewwww…downfalls of the bromance. We beeline it straight to breakfast, and get our name in for the expected twenty minute wait. While loitering in the parking lot, we decide to do pushups. Tim cranks out 37, and then high-fives us. Only 34 more high-fives to go.

We take a siesta at Jonathan’s, watching the latest climbing movies, cultivating some man-crushes. “Alex Honnold, so hot right now,” Al says. Honnold is the star of the climbing world right now. He climbs stuff without a rope that we can’t even do with a rope. His National Geographic cover shot, and an appearance on “60 Minutes” has solidified a level of stardom that no rock climber before him has attained. We also watch a film about Himalayan alpine climbing, where they smoke cigarettes at night in a portaledge (a hanging tent used for climbing) to curb their hunger. Bromance taken too far, if you ask me. We encourage Tim as he cranks out 37 pull-ups and 37 sit-ups.

It was time to complete the high-five challenge. Off to City Market, and we spread the stoke of bromance. Tim approaches strangers for high-fives, and every single one smiles and obliges. What a town! With his 37th high-five of the day the mission is complete. What do we do now? Go rock climbing of course. The rain has subsided and there’s nothing more bromantical than a multi-sport day.

After dangling on overhanging limestone during a slight drizzle, we are spent, and retire downtown for dinner. Tim’s birthday challenge is complete, and Jonathan says he feels like he just had a weekend getaway in his own town.

We all go our respective ways, you can’t take the bromance home with you, but you can take home the memories. Socks, shoes, and all sort of disgusting remains get left in my car, and I spend a week airing it out and trying to find the proper owners of said filth.

There are downfalls of the bromance for sure, which reminds me that these days of bromantical bliss won’t last forever. I’ll find romance again, which will take time away from these sweet nothings of bromance. And, maybe someday when I’m older, hopefully as a writer-househusband who takes care of the cat, dog and houseplants, I’ll record more of these moments into a best selling bromance novel. 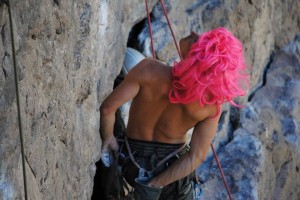 This story was first published in the Durango Telegraph.

Birthing Into The Climbing World
January 6, 2013