Jugs on Jugs by Gaelen Engler 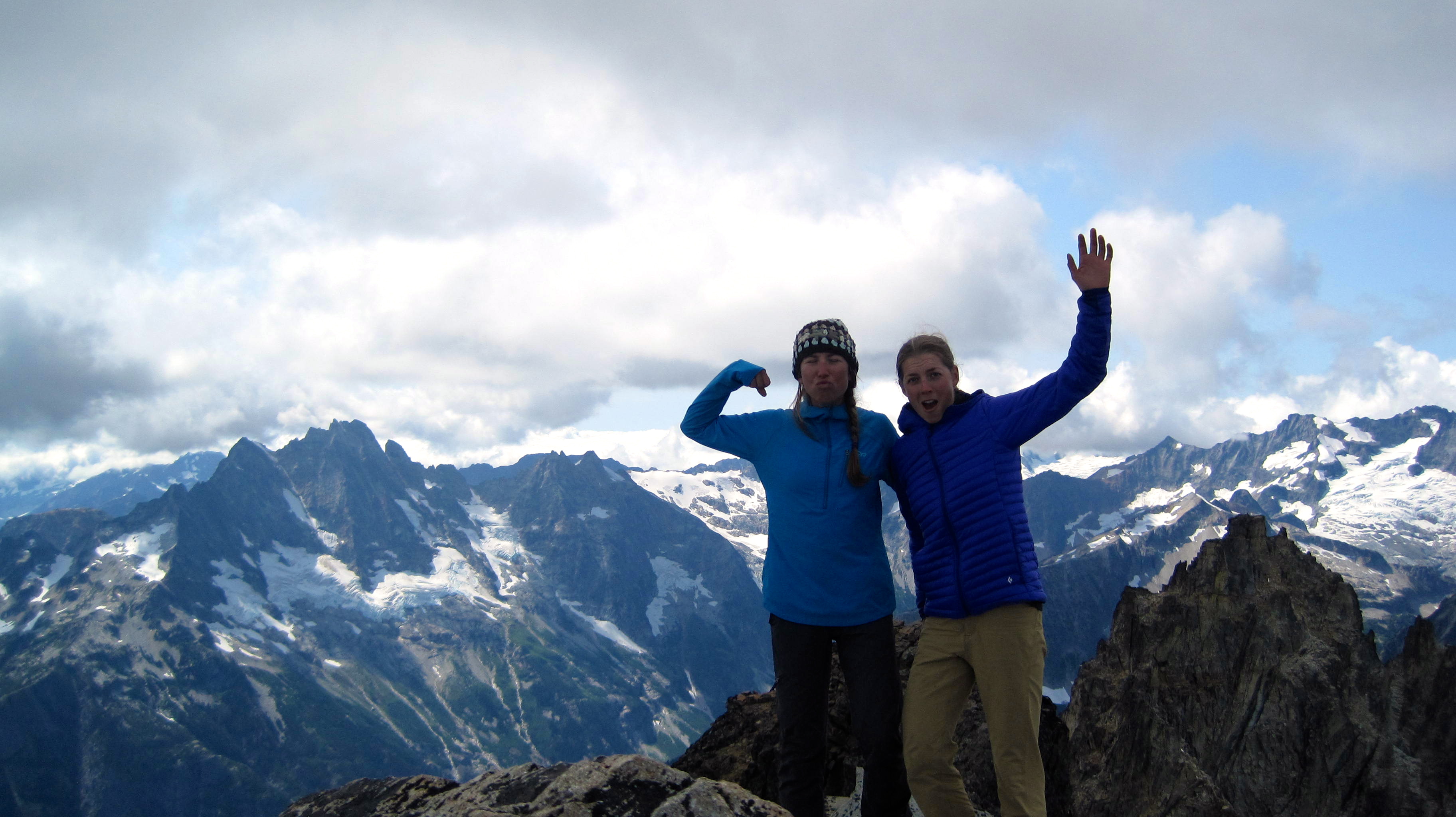 Pulling into The Chief campground in Squamish for my first time, I had to double-check the sign to make sure my boyfriend and I hadn’t driven into the training ground for a traveling circus. Uncoordinated, poutin-hungry tourists from China and Montreal were being given slackline lessons through the middle of camp. It was not uncommon to see a unicycle zoom through, and there were enough dogs running around that one had to assume their ringleader was close by.

by Gaelen Engler (this piece is an excerpt from The Climbing Zine Book, now available)

The Chief campground quickly became known as gypsy camp, and it wasn’t long until the two of us were cooking up tofu and brussel sprout dishes with the best of ‘em. Looking around each day, though, I wondered why the numerous, crowded picnic tables were void of females, young or old. And despite gypsy camp feeling like home after two weeks, there wasn’t a day that went by when the shirtless, chalk-smeared guys just didn’t quite do it for me. While I only have four years of climbing experience under my belt, I am familiar enough with the addiction to have noticed the drastic lack of women that cover the pages of magazines or the walls of popular climbing areas. Over the years, I have become almost obsessed with befriending girls whose passion is to climb. As pathetic as some may find this, and despite all the blind dates with other women I’ve been on, my number of female partners is still dismal.

Throughout the past two years, I have spent over thirteen months living out of a Subaru and climbing every somewhat dry day that came my way. Needless to say, much of my recent life has been spent on perfecting the art of a dirtbag existence. Dumpsters were certainly not off-limits, and sacrificing staples like beer and cheese in order to extend a climbing trip was common. Until I shook hands with climbing, went on a first date in Little Cottonwood Canyon, and fell head over heels for the sport, I had never experienced anything that I would become so completely absorbed with. Befriending active, adventurous guys has never been a problem for me, and I quickly had a plethora of them to call whenever I had time to climb. Yet, if it’s not obvious by now, this is probably a good place to note the other craving that dominates my life, one that actually overpowers my will to climb even the funnest, most exposed ridges around. Girls. Ladies. Badass adventurous chicas! 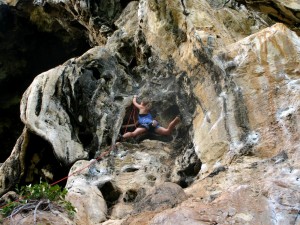 Now guys, I know that if you haven’t given up on this article by now, those few words may have made up your mind. Hear me out on this one though, for the benefit of all humankind. I cannot even recall all the times I have had a girl tell me, “if only I had more girlfriends.” You can just about assume that any girl in the climbing world (as well as skiing and biking) can relate to this. These are by and large male dominated worlds. For example, according to a study done by the US Census Bureau last year, Jackson Hole is comprised of 59% males and 41% females. This was one of the most even ratios they gathered throughout various mountain towns. What can you do, you wonder, to get things back on track?  I have never been one to refrain from telling my close male friends how nice it would be to swing leads with a girl.  My level of desperation is common knowledge among them at this point, and it’s nothing I’m ashamed of. But the times I know they have taken it to heart are the instances when they invite me out climbing with a girl they are hoping to date, even though it would take some attention away from themselves. Or, give me the number of a woman they just met who is passionate about the outdoors. I am never more appreciative than when I get a call from a stranger, a female who had my number passed along to her and is interested in getting into climbing. Hell, if a new companionship has to start with me leading the unprotected crux pitch because neither of us wanted to do it, put me on belay. I’m in. Now, I realize that I am making vast generalizations and unfair assumptions, and we all know what that does. I am speaking for myself here, as well as for those few women I have been lucky enough to have real conversations with; conversations where we no longer have to pretend to be content with following pitch after pitch, or hearing our guy friends complain about the lack of females in our community. I’m sorry dudes, but I just don’t feel that bad for you. Being in a relationship is one of the most wonderful things we experience in life, but having close friends we can count on for support, advice and wiseass jokes is often even more fulfilling, and many women in mountain-oriented communities lack this foundation.

After recently moving to a small town in the corner of Northwest Montana, I am currently experiencing this void. While I complained about having roughly only three girls to climb with in Salt Lake, that’s three more than I have met in my new hometown, and once again, my desperation has become a joke with those who I have grown close to. I was recently passed along the number of a woman whom I have been told by many guys I should meet. After all, she’s a badass and would make a great partner in a region I am new to. With the temperature warming and the rock drying out, I called, left a message, and never heard back. But, the thing about climbing is that it often blinds you to how your actions may look to the outside world, and a bump in the road is never a signal to turn around. I will keep looking, and my friends will keep teasing me about it, and that’s that.

As for what we can do as women to create these relationships of trust and empowerment, the answer is surprisingly simple: be open. Don’t assume that my frequent sideways glances at your ripped abs are a threat, an invitation to compete for the strongest guy in the campground. Be open to the fact that, while undoubtedly envious, in my head I am wondering how best to approach you to see if you’d like to climb the next day. Imagining just how much I could learn from such an experienced woman, without any tough guy, “just punch it!” beta being spewed at me. I borrow this example from the Chief campground in Squamish, where my intimidation was justified after being shut down by yet another potential female climbing partner. Is it pathetic that I get more nervous approaching women than I do the strongest, dreamiest guys living out of their lifted pick-ups and pimped-out Euro Vans? Don’t answer that. Being rejected by a sweet-looking girl stressed me out more than my eight-month stretch of unemployment did. Needless to say, the following day I was back to taking advice on how to pull the crux from my 6’4″ boyfriend, supportive as he is.

Writing this, I can’t help but recall the one and only all-girls climbing trip I took at the end of the summer. I reached out to all of my most dependable female climbing partners, and the three of us met at Lovers Leap, outside of Lake Tahoe. Excited about the patina climbing, we committed to squeeze as much climbing into the long, brutally hot days as we could. Now, my gripe about the lack of female energy in my climbing world is something these girls are very familiar with. So, after having a meltdown twenty feet off the ground when I was above my bolt and committing to diving into a flaring crack on my left, I shouldn’t have been surprised when they wouldn’t let me down. I pleaded, they said no. I demanded, they said no. I threatened to untie, they said no. Finally, after realizing that these girls would settle for nothing less than my success on this pitch, I swung my way across those dykes and onto an incredible, bulging patina pillar. Seconds after placing a number 2, I couldn’t help but think how lucky I was to have these girls encouraging me to scare the hell out of myself. Although hanging under a roof the next day, once again paralyzed by even the smallest runout, we somehow had to repeat the process all over, and once again I pulled a move I never thought I was capable of. Had I been climbing with my boyfriend, I would have been lowered the minute he realized that tears were on the way. And, after climbing the pitch on toprope, I would spend yet another ten minutes on a belay ledge kicking myself for backing down. 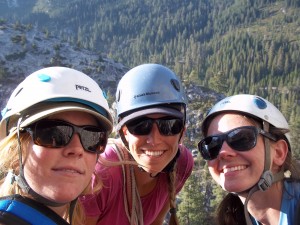 Some might call my call-to-arms a feminist climbing manifesto, and rightfully so. I would be happy to continue, bringing to light all the positive rewards we women could dredge from the depths of the male dominated climbing scene. I would love to share more fulfilling, empowering instances where I did get to share a climb with a female, only to realize how much harder I pushed myself in the presence of a new and exciting energy. However, if I had more stories I wouldn’t be writing this article. I am not here to demand change and give concrete examples of why nurturing female-to-female relationships is important, because to many women it may not be. This I realize. I simply hope to open doors to new friendships, giving women who may just “wish they had more girlfriends” an initiative to act on this desire, one that often keeps me up at night. How can one sleep when they realize what a universe of intelligent, strong, motivated and adventurous women could look and feel like, if only they were able to drop their competitive and independent instincts, just for a moment? The next time a girlfriend of yours repeats for the one hundredth time how badly she wants a fellow female climbing partner, take out your phone and give her a number. There’s nothing I like more than a good old fashion blind date, when a rope, harness and full rack are involved. Two racks, if you know what I mean. And ladies, the next time you see another girl checking you out, do the difficult thing, the hard thing, but the thing that can get easier with practice and continued success, just try and refrain from pickup lines involving nuts, cracks and chalk balls. God knows we’ve heard them all.

Gaelen Engler currently lives in Whitefish, Montana, where she continues to seek out women who are passionate about climbing.  This piece is an excerpt from The Climbing Zine Book.