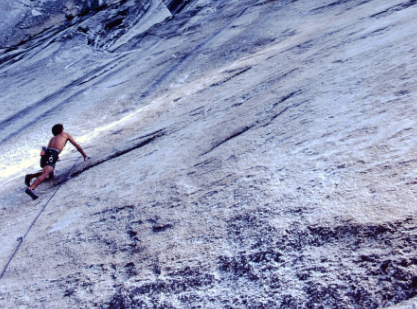 The single most important choice you’ll make before any big (or little) climb is your partner. The right partner hopefully brings skills that you don’t possess, is someone who you love to be around, and has the same motivations as you. You trust them implicitly. Together, your partnership is more than the sum of the individual pieces. That’s what a strong team is. Most probably haven’t heard of Steve Sutton, but he is a straight-up legend from back in the day and one of the most talented, hard-driving, indefatigable cats I’ve ever met.

by Brooke Sandahl (Note this is included in Sandahl’s photo essay for Volume 8, The Old School Issue. All photos by the author.)

Canadian born, Steve-o cut his teeth on the walls of Squamish and was one of the original Squamish Hard Core. But, like a few Canadians I’ve known, he ended up migrating to the States and essentially lived in California for many years. As we all know, it’s hard to beat that clean granite and Cali sun!

In the Harding-Robbins era (1960s), there would be a definite machismo associated with big walls and with some an ugly competitive vibe. I think this was born mainly out of fear, but some of these guys were just super competitive and brought a somewhat unhealthy aspect to climbing. As things progressed and the next generation came in (think Burton, Porter, Sutton, Bridwell, 1970s, flower power/age of Aquarius), there was more of a brotherhood forming, and this strange machismo started taking a back seat.

Steve Sutton and Hugh Burton, another Canadian transplant, were among the first to eschew this type of behavior and instead brought a refreshing attitude that embraced the natural world and sought to harmonize with it. Completely uninterested in notoriety, manliness, sponsorships, or other ego-driven thoughts and pursuits, they were satisfied to just go live on a big wall and enjoy each moment as it presented itself. To quote Ken Wilson in Yosemite Big Walls, “Burton and Sutton are more preoccupied with the aesthetic and metaphysical experiences during their long ascents.” 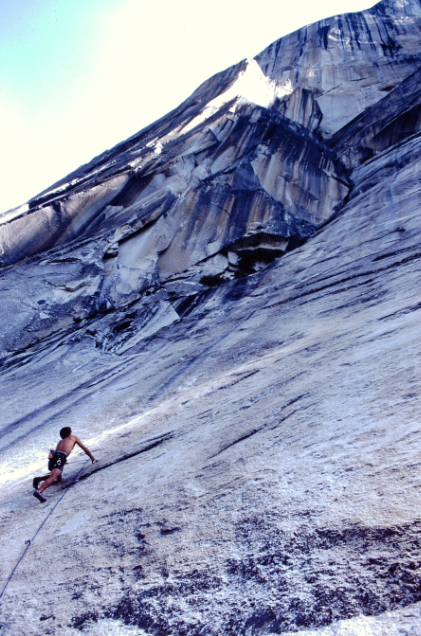 I think that line says a lot about what these guys were up to. This philosophy of living and existing in the vertical—bringing books, good foods, maybe a pipe, and taking days off when you were tired, or just deciding that the bivy was too cool to leave—was a revolution in thinking. Having grown up in the ’60s, timing was obviously a big influence on their thinking—together they would put up Mescalito and Magic Mushroom, with Charlie Porter and Chris Nelson, two of the most cutting-edge routes in the world at that time. There would be mind-expanding forays high on the granite walls that nurtured an alliance with nature. Conquest never entered their minds.

Steve Sutton would be an obvious choice as my partner for a free attempt on the South Face of Mount Watkins. He had done the third or fourth ascent decades before and was keen to have a look at freeing it. To me, it was a chance at a dream, to walk up and free climb a grade VI big wall onsight, and coming from the ground. Eight days later, our free bid would end a mere sixty feet from the summit anchor. Having run out of water that morning, in blistering heat, we inched higher till we hit the final aid section. Sadly, we had to aid through it. Our bid for an all-free ascent, coming from the ground, in a push, would end here. A few days later, we returned via the Tuolumne high country and were able to put together an amazing final pitch (12a), thus making the wall’s first free ascent (albeit discontinuous).