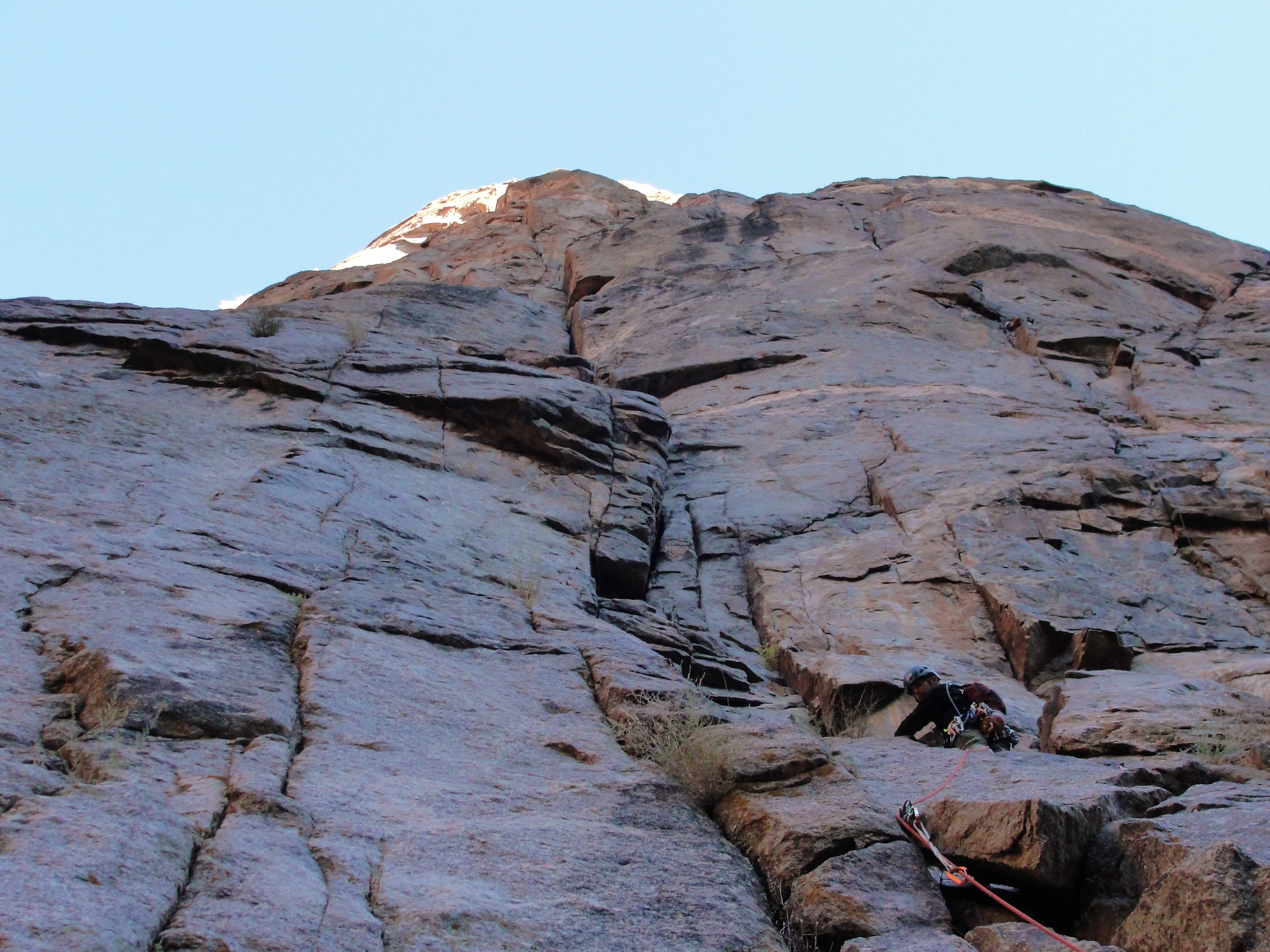 As we descended further into the dark abyss, that haunting, uncanny mood settled in once again. It was an awareness I had been acquainted with once before, a year back. The pale moonlight disappeared further out of reach with each downward step, swallowed up by the surrounding two thousand foot narrow canyon walls.

A place usually overgrown with poison ivy was bare of its toxic remnants in these bitter temperatures. Winter was here. In the shallow days of November, the sun’s rays scuffed the canyon floor for a few hours mid-day, before casting it back into shadow. The Black Canyon seemed like a fitting name. 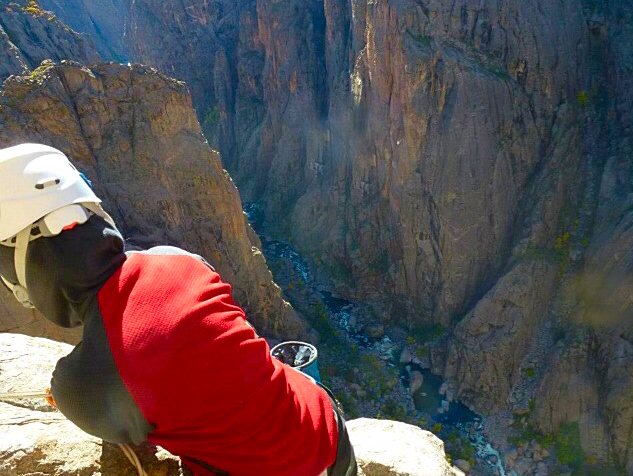 Consumed in the depths of the canyon floor, all seemed muted but the reverberations of the spiny Gunnison River. Morning’s first light traced the canyon rim, piercing the skyline and shedding hope of warmth below. The moisture in my exhales condensed, yielding a silver mist of vapor from my hurried breath. My eyes devoured each striking peculiarity, from the crystallized pegmatite streaks high up on the wall to the deep charcoal color of the granite. I remember my heart beating faster as these sights linked my memory to the first and only other time I entered this place. Gazing higher, that familiar thought surfaced- our only escape is up. Here I found myself, again, in the belly of the canyon with life’s comforts 2,000 feet above. And for some reason, this was my idea.

A newcomer to this place, my partner Ashton greeted it lightheartedly, holding a light steady gaze as he strolled down the trail. His nonchalance unsettled me. It was reminiscent of my first time in the Black. I sped up our pace, seeing the early morning sun glance over the crest. At the moment daylight was unwelcoming.

We arrived at the prominent, right-facing corner that marked the start of The Scenic Cruise, our most challenging objective of the season. It consisted of a distinguished 13-pitch climb summiting North Chasm View Wall. As the cold November wind whisked throughout the canyon, we roped up, organized, and pressed all thoughts of why the hell are we climbing this in winter out of our minds, and our vertical adventure began.

I belayed Ashton, watching him move up the rock indolently, pausing every few moves to warm his fingers. Not even my 800-fill down jacket kept my body from shivering. The rock seemed to be absorbing and radiating cold air.

Soon the light danced down the wall, greeting Ashton as he moved into it. We hollered back and forth jokingly, I was a little envious that he was now baking in the sun’s warmth. So far we were making good time. Nonetheless, I couldn’t help but remember the perils of my last adventure on this route. 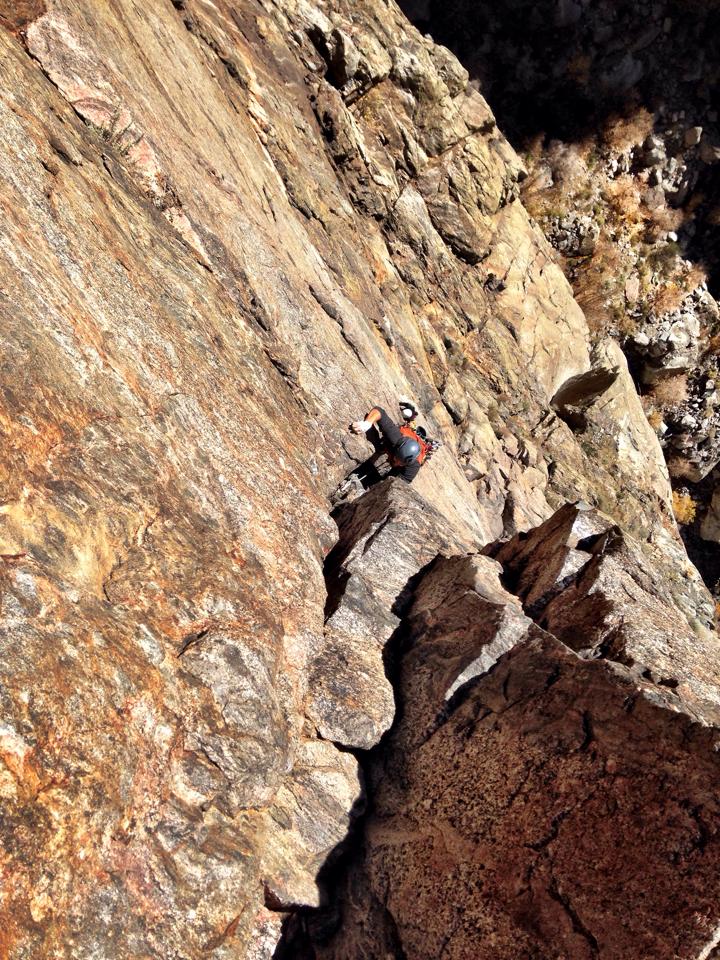 Up high on the Scenic Cruise. photo by Alexa Flower

Elliott and I rest briefly at Pitch 8. At least that’s where we think we are. We ran out of water hours ago. Earlier I struggled over the crux pitch, gasping for air, staggering atop the final bulge to the anchor. In that moment, heat exhaustion and dehydration overwhelmed me. Climbing all day in the relentless heat proved to be too much. I looked up at Elliott with helpless eyes, asking for water only to be told that we had no more left. I let out what sounded like a sob, my shoulders taking an over-exaggerated heave, not wanting to believe what I heard.

Elliott passed me his Nalgene, advocating I wet my lips with the last few drops. I hovered the empty bottle over my mouth, managing to squeeze three drops out, and gazed down into the dimming void, my helmet grating against the rock.

Now, A few pitches further, I take a seat on our small belay ledge, letting what feels like an apocalyptic reality sink in.The dark is moving in ominously, reaching for us with its bony fingers and wrapping us in its binding grasp.

We have spent the last two hours trying to find out whether we’re on route or not. Elliott climbs up and back down, traverses right and back left, but no features seem to match those on our topo.

I feel ill prepared. Useless. And ultimately, terrified. Elliott assesses our situation objectively, while I let fear drive my thoughts. As an inexperienced climber who has been introduced to trad only four months ago, I feel frozen in my shoes. I don’t know what to do.

We have 500 more feet to go and the sun has already glanced back over the canyon rim. 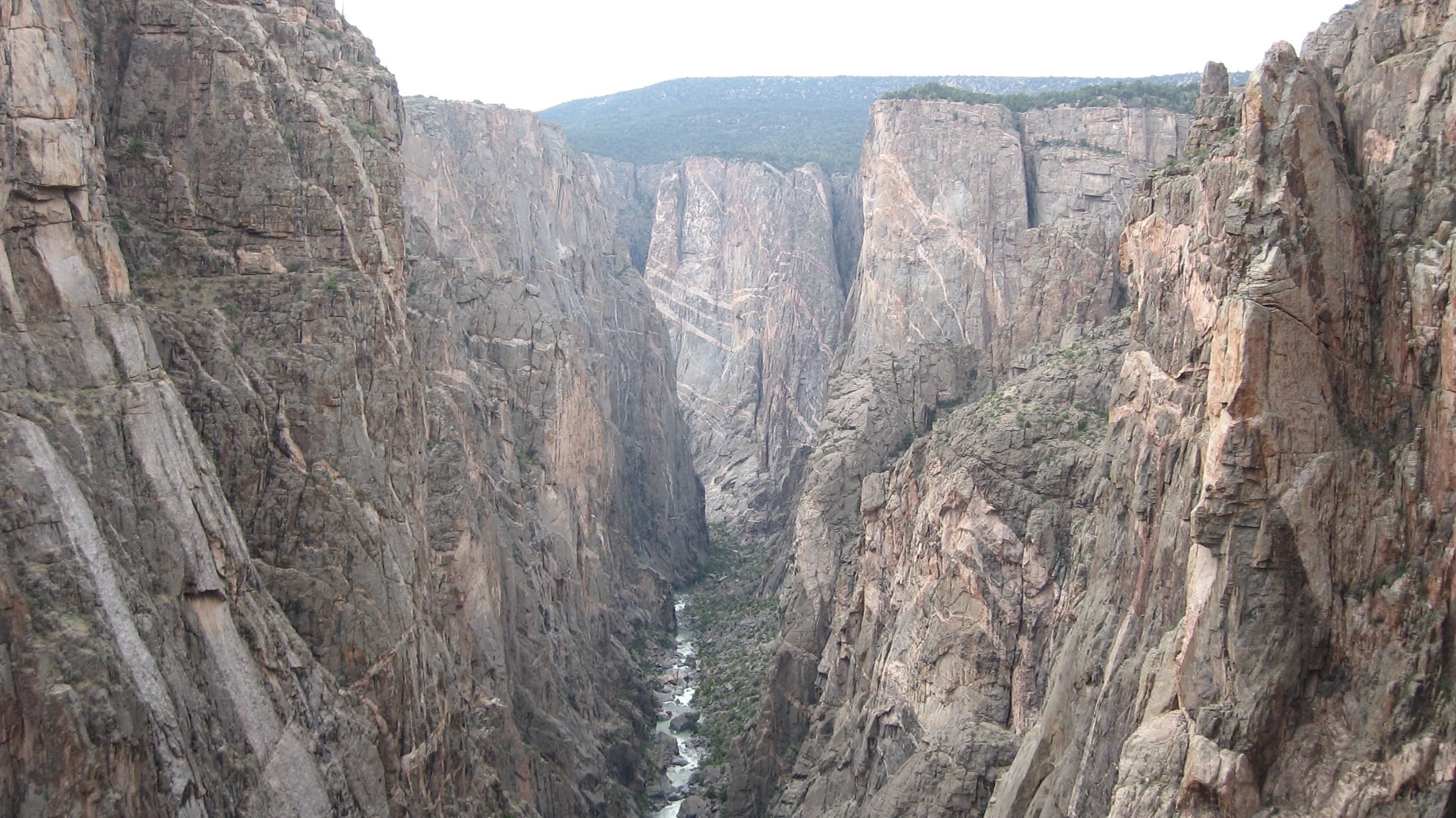 My flashback came to a halt with Ashton’s shout, proclaiming I was on belay. Happy to get moving, I took down the anchor and launched into the relentless hand and finger crack, what I felt was the endurance crux of the route. Such repetition up a near vertical crack proved challenging and tiring.  Nevertheless, I persisted, soon sitting beside him along the pegmatite band, assessing our next pitch.

Beads of sweat dripped down his forehead as a chilly morning turned warmer under the sun’s heat.  I guzzled down water, smiling inside. I had convinced Ashton it was necessary to bring at least four liters of water… and maybe a Gatorade.

With eagerness, we cut across the pegmatite band and skyward, surmounting the final crux pitch of the route- only seven more to go. The crux involved a corner system comprised of sustained stemming and lie backing up a slightly over-hanging crack. The aggressive power sequence that this pitch demanded proved as difficult as I remembered. I couldn’t fathom that I had climbed this pitch last year as a new climber.

We took a moments rest on the large belay ledge, chowing on a bar. Ashton looked tired and distracted, mumbling how he just wasn’t feeling it today. I could empathize. The Black Canyon stirs a unique kind of inspiration. It felt more like an incessant inner battle between courage and succumbing to fear, rather than feeling “good” about your climbing.

Ambitious to keep moving, we continued on. The sun now rested westward in the sky, discouraging us to linger.  Within two pitches I reached the alcove. A tiny ledge, big enough for two, settled behind a massive, detached flake. I didn’t even want to guess how this feature still clung to the wall, dancing with gravity. My heart fluttered and mind raced, memories collapsing on top of one another. Relief flooded my body as we continued passed it.

My mind is overburdened with alarming thoughts. I climb upward blindly, groping aimlessly; the darkness of the canyon proving itself so dim that all is only seen as different shades of black.

Circumstances have forced us to make a choice.  We choose to sleep here.  Daylight has withdrawn the last of its rays and the frigid evening comes shockingly, like when you jump into icy water for the first time. No longer perturbed about dehydration, I try to fathom how we will keep warm all night.  I pull the hood of my sweatshirt over my head and put on the windbreaker as an outer layer.  We curl into small balls and allow the cold night to consume us. 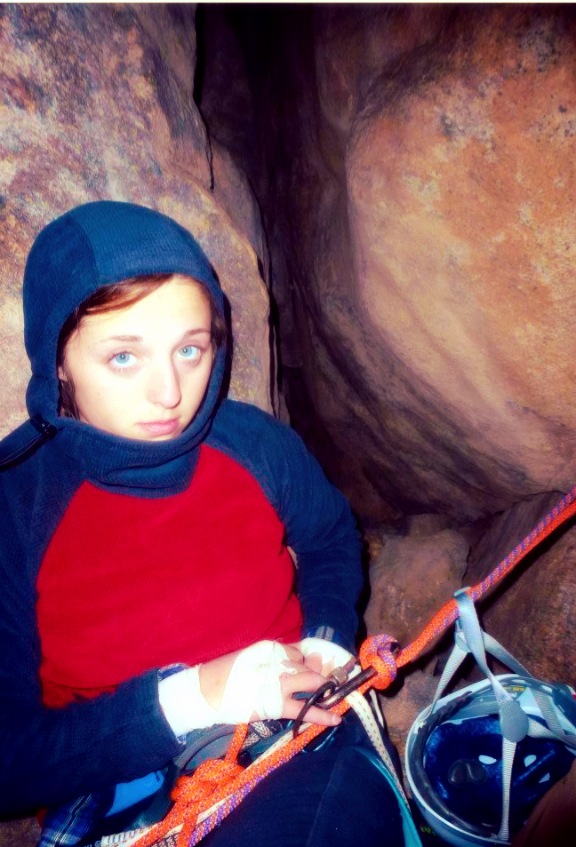 I looked down at the alcove below and again after the trail of rope leading a sharp right.  That earlier relief proved fleeting as darkness moved in, only 40 feet from where I was benighted. My mind battled the thought that after a year of climbing, learning, training, I have only made it 15 meters higher.

God dammit! I cursed at the Climbing Gods… if there were any. Spitefully, I received solitary silence in response.

I pulled out my headlamp and stepped out onto the airy 5.8 traverse with the last of the light being drawn behind the canyon walls.  Now, all that existed was within the realm of light from my headlamp. The canyon remained strangely muted; all sounds sucked down into the river below, except for faint clashes of metal on metal. I couldn’t help but feel alone, and yearned to be reunited with my friends above at camp.

We linked the final two pitches, simuling the last 20 feet to the summit. I unknowingly neared the canyon rim; assuming we had another 80 feet to go. Soon I could hear my friends above laughing; a very pleasant surprise. They had come to meet us at the top with beers already cracked. My heart beat wildly and I climbed faster. My lips widened into a huge smile and I howled at the top of my lungs.

Before Ashton and I could unrope, our friends cheered and handed us cold IPAs, in celebration of a good, long day. Two of them climbed the route ahead of us, and we were all thankful that things went, for the most part, as planned.

I couldn’t help but feel grateful that I didn’t top out in the same fashion as last year. Elliott and I summited early the following afternoon. After finally realizing that we were on route, the sun was aloft in the sky, beating down our backs, and the dehydration crushed us. We had no saliva left to speak, nor the strength to hold our heads up. As we topped out, I muttered that I could not make the five-minute walk to camp, and collapsed in the blistering heat.

The alcohol soaked into my parched body quickly. We sat along the rim for a few lengthy moments, enjoying the satisfaction in stillness, and reflecting upon the day. I love climbing for the mental and physical challenge, for the bond it creates with you and your partner, and for the incredible places it can take you. I love it because you can make something that was once impossible into a reality; one of the most inspiring feelings I have experienced. I find deceits in this world everyday, but climbing is real and honest.

I gazed up at the stars and prepared to head back to camp. Ashton smirked gaily, a look I knew too well.  “What do you think about making this weekend full-value… and go skiing tomorrow?”  We packed up and rallied into the night.

Alexa Flower is a former marketing student, current corporate cog, and climbing adventurer from Vail, Colorado. She moved to Boulder last year to access world-class climbing while holding down a corporate job, and now has plans to take a seista from the working world to pursue traveling, climbing, and writing.

A True Maiden Voyage, A Fire In the Black Canyon
January 8, 2014

Reflections in the Black Mirror
February 21, 2013