A True Maiden Voyage, A Fire In the Black Canyon 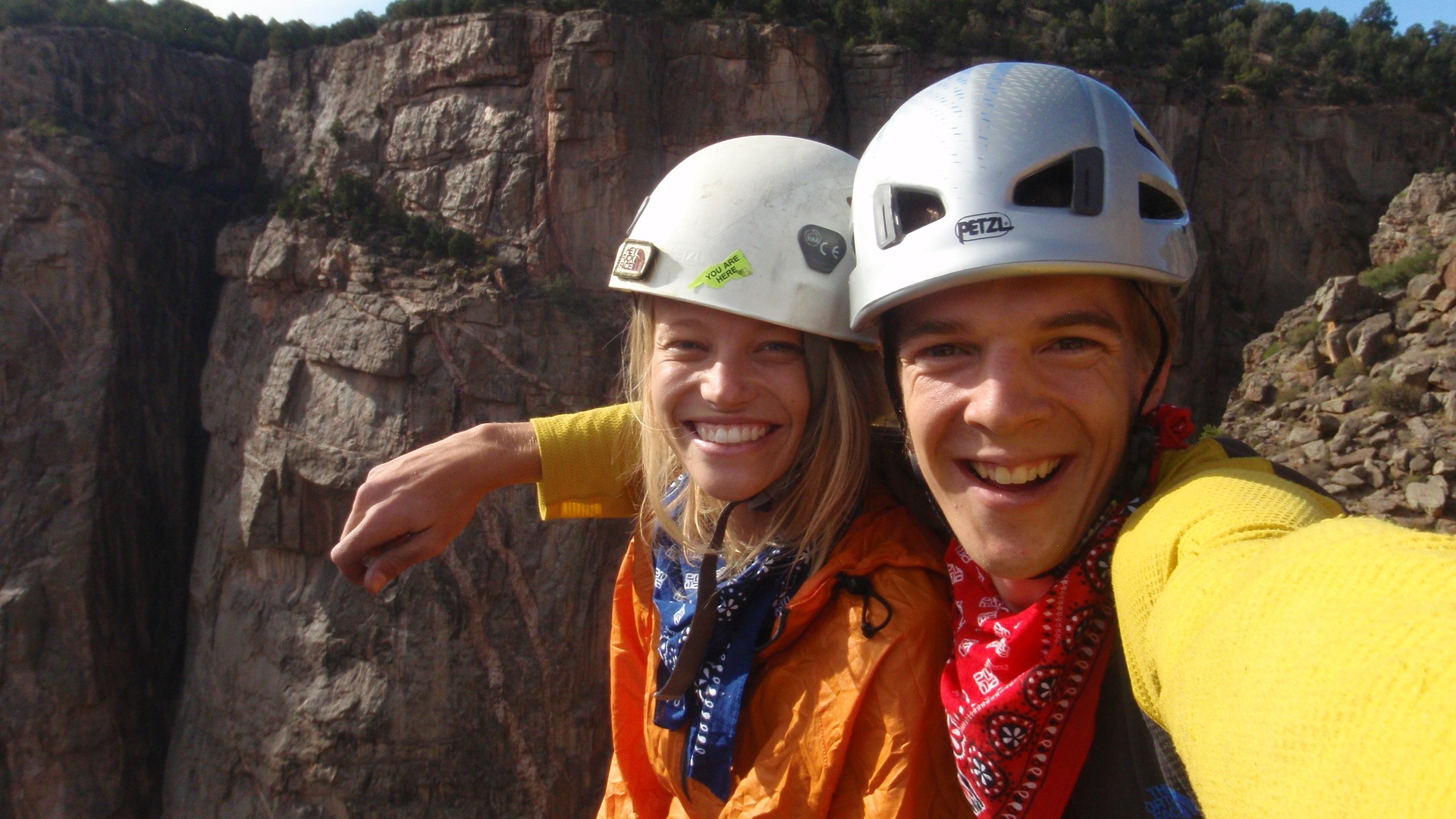 I was riding shotgun in an ‘86 Safari van, smoking a cigarette, and wondering where the hell we were headed. I had agreed to go on a climbing adventure with a boy I met just a week ago. I borrowed his harness to try rock climbing. Returning it after only one use, I found myself making plans to climb with him in this place called the Black Canyon.

In preparation for the trip, I bought a headlamp because a friend told me, “That is what you do when you go camping in Colorado.” I scrounged together some tennis shoes, a pair of hippy linen capris, and a pack of cigarettes.

I was continuously looking out the window with absolutely no idea what I was looking for. The landscape seemed oddly flat, but I kept reassuring myself that this boy was nice enough and that we were actually going to go climbing.

Then out of nowhere… BOOM! 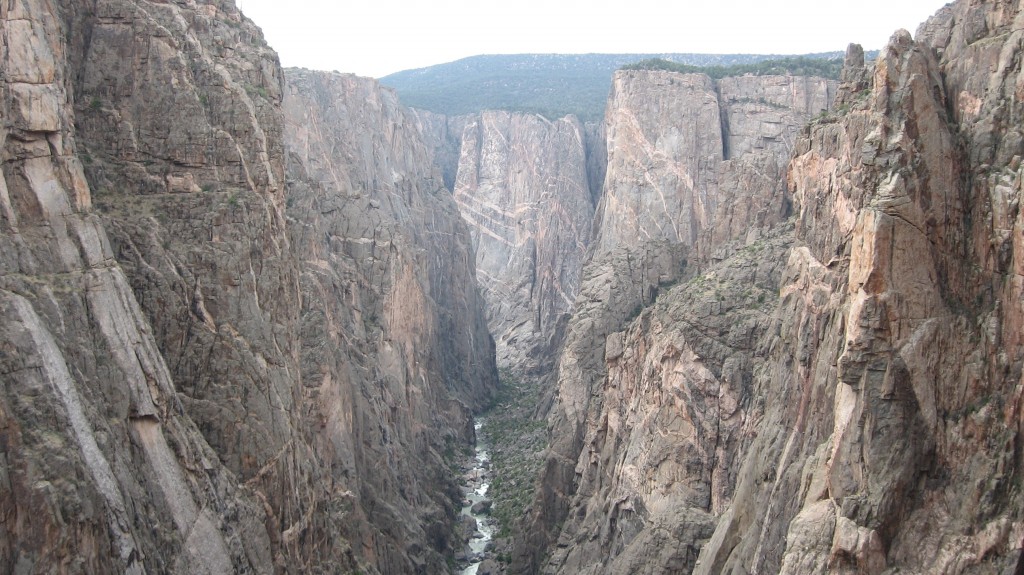 The flat plains suddenly dipped into an unexpected, deep and narrow canyon. We parked at one of the few campsites as I started to feel an intense stillness, not a somber or lonely stillness, but one molded from many years of respect. As I peered over the rim lying on my stomach I had a feeling that many great climbers had done the same, and I began to feel a part of something big. I should have been terrified, given my geological location on earth. Instead I felt like I had just popped some ecstasy, except it was not that chemically induced sense of liberation, it was genuine freedom. 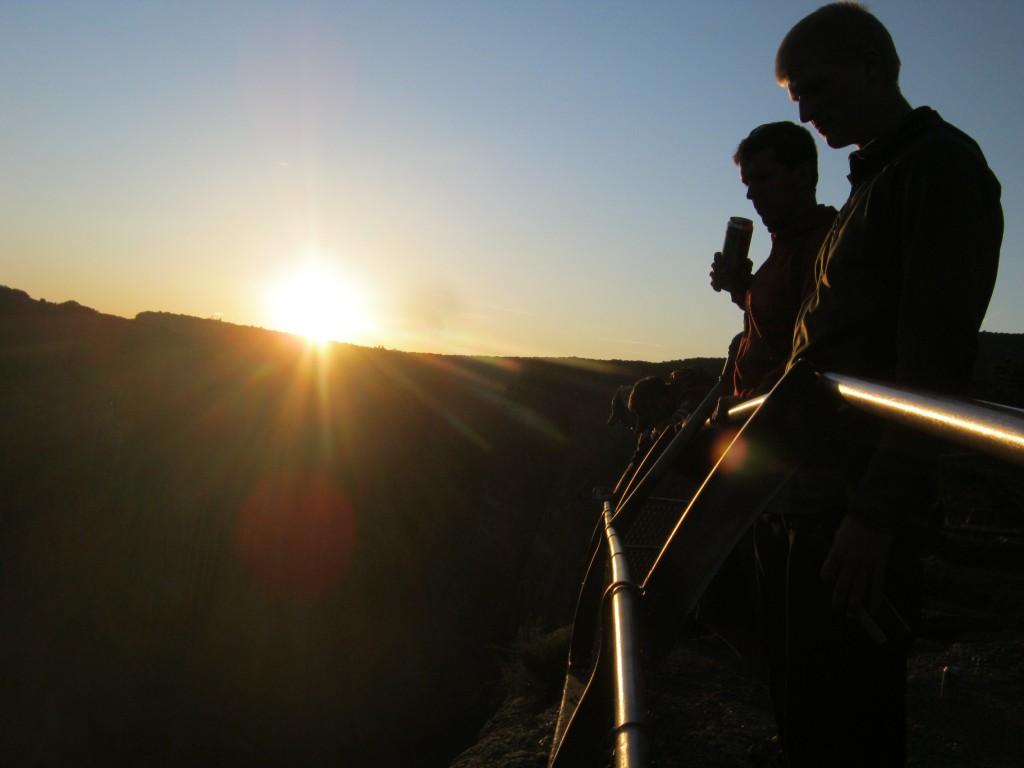 We watched the sun cast a warming glow on the otherwise daunting streaks in the wall, that I later came to learn were the notorious pegmatite bands characteristic to the Black Canyon. Cracking open my first ever IPA, my guide was becoming more animated by the second.

He was talking about climbing. I had never seen a passion burn so brightly in someone’s eyes. As he was explaining, as well as dynamically performing, definitions of casual rock climbing terms such as “cleaning a pitch” and “belaying,” I again began to feel a part of something big. I felt honored to be sharing in his contagious passion even though I was still not sure what exactly that passion was. Given that I had just moved to Colorado two months ago from the ever so exciting city of Springfield, Missouri, I was in awe of this amazing man who was willing to share his time, his love for rock climbing, and his delicious beer with me. I barely knew him.

After his animated performance he retrieved his headlamp, so I followed suit, and quickly learned that headlamps are entirely more useful and convenient than flashlights. Next, my guide pulled out a folded camp stove and, to my surprise, was cooking the staple “sending” fuel in less than a minute! Bacon, of course. I started to hear other people settling into a few of the nearby campsites. Shortly after dark, campfire sparks were flinting through the enormous star filled night. Almost as if these sparks were a cue, my guide convinced me that we should go and talk to some of the newly arrived climbers.

This seemed strange to me. Growing up in the Midwest mostly meant you stay in your bubble, and I’ll stay in mine. I tagged along, my nerves starting to rattle as we approached a group of younger men who also had headlamps. I was beginning to feel pretty cool with my headlamp. I went in to shake one of the young men’s hands, blinding him with my light, and all the coolness I had just felt flashed away as soon as it had come.

I forgot their names almost the second I shook their hands and took another gulp of beer to calm my nerves. Then the craziest thing happened. My guide and these seemingly quiet men started excitingly talking in a language I could only catch bits and pieces of. Even though I did not understand most of the conversation, somehow my nerves completely evaporated and were replaced by curiosity. I wanted to find out what they were talking about and how to use these so called “cams.”

One of the young men turned to me and again I was mesmerized by that same fire I had just seen in my guide’s eyes. He asked me what we were doing tomorrow and I said we were going to climb Maiden Voyage. He was instantly stoked for me, so I bravely asked what he was planning to climb. He replied casually, saying Take Your Time. I later learned this route was pronounced Tague Yer Time, a seriously proud 5.12. As we left the circle of headlamps headed back to camp, I could not help but feel a sense of belonging to these men and a connection, even though I had just met them. Laying in the van, I let the image of those fiery eyes kindle the beginnings of my own unknown passion, while feeling the weight of the Black Canyon’s daunting spirit.

I woke up with a mix of anxiety and an overwhelming excitement. My guide was making coffee while sorting through these strange devices that I concluded must be the cams. He instructed me to put on my harness and my sad tennis shoes, while informing me of a motto here in the Black Canyon, “a rope, a rack, and a shirt on your back.” I thought, this place really does demand respect. Beginning the descent, I learned what rappelling was and how to execute it. Sooner than expected, I found myself in the belly of the Black with only one way out.

Whether it was just plain luck or natural prowess, hold after hold appeared as we climbed higher and higher. At the top of every pitch I felt a resurgence of energy and thrill. I remember looking down at the winding, roaring river. I smiled thinking only one thing:

It felt like I was dancing over the granite, floating up into the perfect blue sky. I was just there, just existing, and that was absolutely fine.

We celebrated the summit with a picture. I still look at it and giggle at my crooked helmet. One thing was different about me that day in that picture. A familiar fiery passion is radiating from my eyes. At the time, I did not know what that passion would become, but in the moment it was simply the love of living. I’ve heard that you can never attain the exact feelings of that first high again. I agree. Not because I have less passion these days, but on that particular day a spark of something truly amazing had ignited this burning desire in me, to feel free and fall head over heels into my love affair with rock climbing.

That night we drank tequila with the headlamp crew and shared stories of the day. Again, I drifted off into this new comfort with people I had just met. And, even though we only shared a few stories, for the first time in my long line of failed connections, I belonged. I belonged under the stars, on top of the summits, and in the ring of headlamps with my new partner, sharing that fire.

Support the zine, and buy a copy. They start at .99 cents! The most recent volume of The Climbing Zine, The Dirtbag Issue is available in print, and on Kindle.

A Scenic Cruise and Then Some in the Black Canyon by Alexa Flower
June 9, 2014

Reflections in the Black Mirror
February 21, 2013