Susie and The Gnar by Joshua Smith 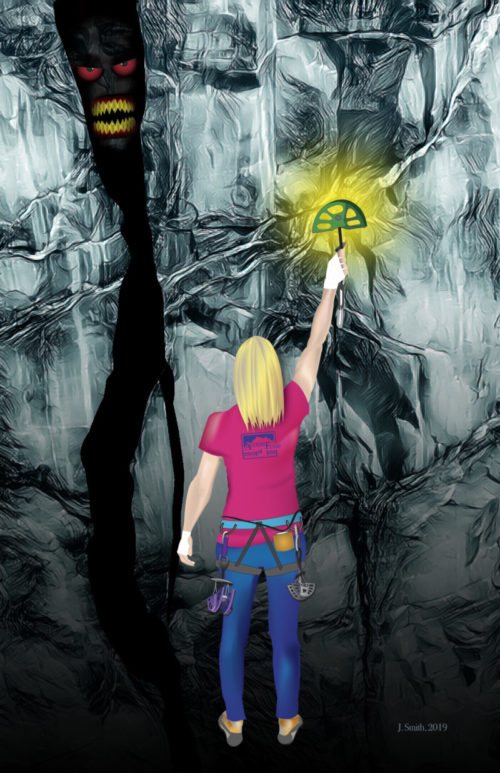 Some are blessed by fate

With thews and spines of steel,

Some work hard and fiercely fight

To rise above the common weal.

Susie packed a bit of both

In a frame of five foot three

And to her the words on belay

Were a nod toward a destiny.

Off-widths were her true love,

A romance of rock and bone,

She adored the thrutch and thrash

And owned the awkward stone.

She cragged around the country,

Slept above the Valley din,

But it was in the Black

That she felt most at ease,

Dangling on the Dragon’s face

Basking in the canyon breeze.

Once she was rappelling

Down the Painted Wall,

her partner took a fall.)

When she spied an awful thing

A crack both wide and far,

It reeked of scars and chewed-up meat,

The monster was at least five hundred feet

Of four and five and six,

Its rock was mostly crumbling peg,

It overhung one foot in four,

Its darkness sung a siren song,

Bats were sleeping in its roofs,

And its angles were all wrong.

She gave a desperate, hungry glance

And vowed that she’d be back,

With a more durable partner

And a slightly larger rack.

But then she met a handsome boy,

He was sweet and gave a good belay

And made a mean martini too.

They tripped around the West,

Had Thanksgiving at The Creek,

He caught her on the Century Crack

(Onsight, after maybe one quick peek).

But he would look askance

As if to plead and softly say,

“How can you both love me

And still risk your life this way?”

Susie went to meet his parents

Then stopped living in her car,

But late and sleepless in the night

She dreamt about the Gnar.

Then one day something broke.

But I feel my time is fleeting,

And there is sending yet to do.”

She made a call and packed a rack,

Turned toward Crawford with a grin,

Her heart did spurt as she hit the dirt

And started driving to the rim.

Susie nodded to her partner

At the top of the SOB,

“You take the fists and fingers,

But that off-width is all me.”

By early day they’d made their way

To the cusp of a cavernous maw.

It was everything she’d dreamt

And both felt fear and awe.

Just smiled and took the lead.

Why take up time with talk

When truth is in the deed?

She started out with stacks,

Then threw a chicken wing,

And felt an urge to sing.

Blood was dripping past her ear

And she’d only made it fifteen feet.

She matched a hand and foot,

Then grabbed some peg to eat.

Her path led straight to hell,

Through roofs and pods and more,

Too fast the darkness fell,

And by lamp she fought and swore.

As she battled onward against fate,

Her body was full spent,

But she had no breath for “take.”

At last the night was rent,

By sunlight creeping from the east,

Her throat was raw, her body bent,

As she exited the beast.

She felt no pride, no hope,

For all was still within.

She quietly fixed the rope

For her partner jugging to the rim.

To the west one final star

Winked against the dawn,

She found and faced the Gnar,

And perhaps could now move on.

Josh Smith lives in Northern New Mexico. He has been climbing regularly and writing about it sporadically since the early 1990s.