Holding the Rock Together 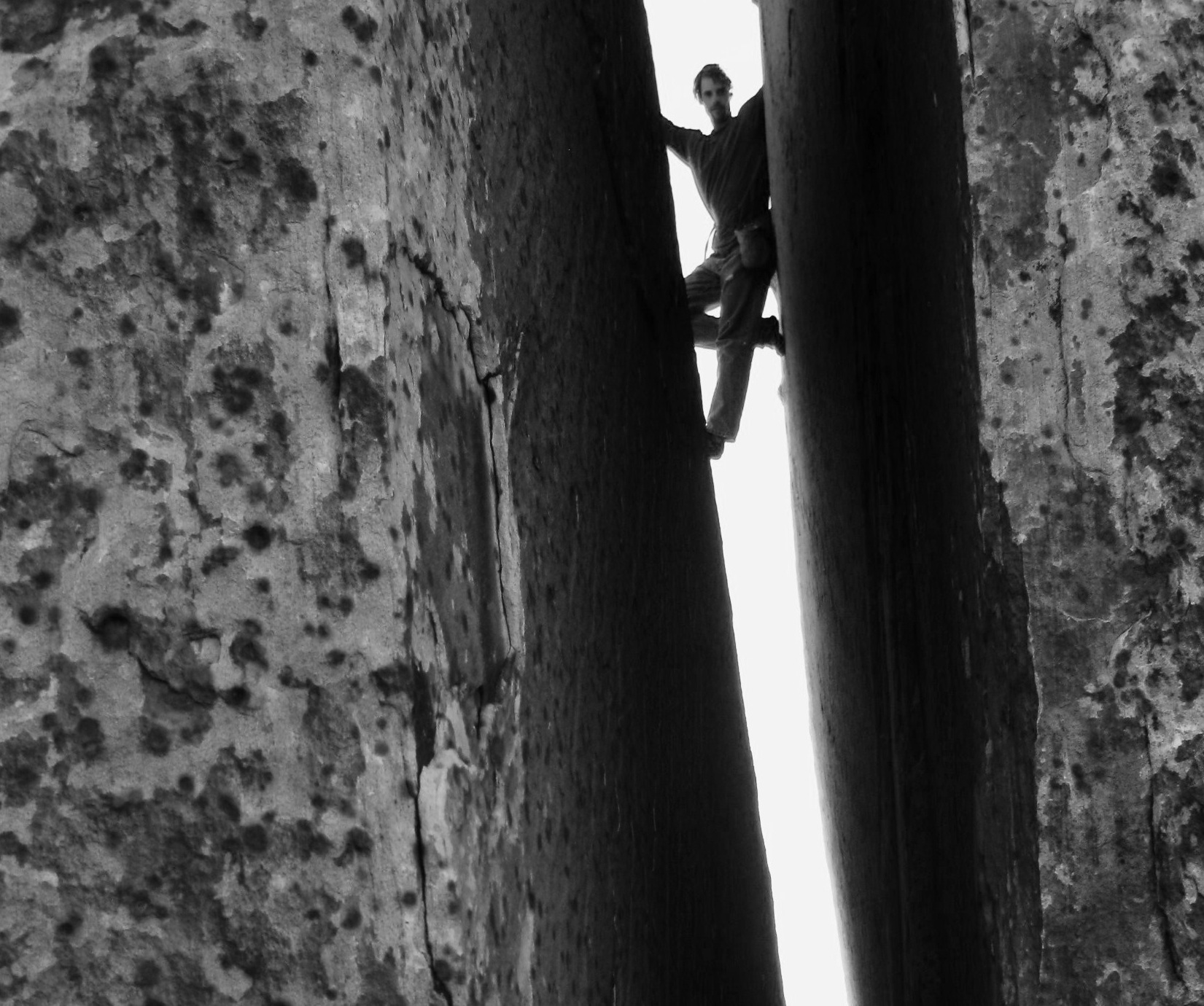 I won’t say that I’m afraid of heights, but to be standing on the edge of anything looking down more than 50 feet or so gives me a funny feeling in the abdomen from just below the sternum all the way down to where the feeling translates into a moderate concern about bladder control. It’s not necessarily a bad feeling – in fact, if you aren’t getting much good sex, it’s a fair substitute. But it is neurally more directly connected to fear and fear’s neighbor pain, than to pain’s neighbor pleasure, and I don’t seek it out deliberately.

Which left me feeling a little apprehensive, the morning I got in the wrong line in Army, and found myself climbing on a school bus with a bag of rope and mountain-climbing gear some corporal had thrust into my hands. One of the best things that ever happened to me.

I was, at that point, one of the worst things a human can be: a totally green Army Reserve Second Lieutenant just coming on active duty for my mandatory two years, fresh out of college and ROTC – a Reserve Officer Training Corpse. I’d been advised that that was the only intelligent way to get through the “military obligation” we had back then in the Dark Ages – go in as officer, all the people who knew nothing about it said; you’re too smart to have to go in as an enlisted man. I soon learned that the only intelligent jobs in the Army are the ones reserved for the enlisted soldiers – motor pool, clerk-typist, etc. I might have made it through the whole two years if I’d been enlisted and able to get into a motor pool – and I’d have been much better prepared for the kind of vehicles I’ve owned most of my life.

But meanwhile, back on topic – there I was, my first Monday morning on active duty, a ROTC second lieutenant for whom no one, especially enlisted men, had anything but contempt, told to go to the “NCO Academy” for a class. So I went to the designated building, told someone I was there for a class, and he told me to go see so-and-so, get my gear and get on the bus. What I found out later was that there were two classes starting that morning. One was for green second lieutenants to get them “orientated” in things like mess hall management, paper shuffling, marijuana detection, et cetera, and the other was a “mountaineering” class for young cannon fodder since we were defending America in mountainous terrain halfway around the world at that time.

So I got advised into the wrong line, and found myself in a bus heading for some undisclosed location with a bag full of stuff that clanked ominously and had a rope end hanging out like a cobra tail. I thought of everything I’d been told about Army endurance courses, rigorous physical training, et cetera, and figured I was probably about to die. Te morituri salutamus.

But what actually happened – we climbed off the bus in a small parking area in one of the most beautiful places I’d ever been in my life, North Cheyenne Canyon, just west of Colorado Springs and Fort Carson, where I (a Pennsylvania boy) had requested assignment. And waiting for us there was a gray-haired old man in Army fatigues who didn’t look in the least like the kind of a macho sonofabitch I’d been led to expect.

What followed was two truly magical weeks. The old man was a mountain guide named Pop Sorensen from up the Fraser River valley, and he loved the mountains and wanted us to love them too. If you were there to conquer mountains – the general attitude of the captain and young NCOs (non-commissioned officers, the spine of the military) in charge of the “school” – “Specialist” Sorensen wouldn’t get in your way, but basically he loved the mountains enough so he didn’t want to leave us with any fear to conquer too.

We started with real basics that real mountaineers probably don’t even think about – how to walk uphill and walk downhill, how to look for the easiest way up or down rather than the hardest, a lot of things I still use a lot, never having been much about trying to conquer anything. When despite my best efforts, I still find myself, as it were, between a rock (here) and a hard place (down there), I still go back to things like crabwalking, or just sitting down and thinking about it, that I learned from Specialist Sorensen.

But we also got into the basics of technical climbing – working with our ropes, pounding pitons, belaying each other, and leaning onto a rope and performing the death-defying act of backing off a cliff into the absolutely exultant float of a rappel. A wonderful time. After the first week, I ended up going back up the canyon on Saturday with some of the great camping equipment the Army provided and camping out. I’d wanted to come to Ft. Carson to be close to the mountains, and how much closer could you get than when you’re looking for a handhold in sandstone a foot from your nose?

But that “best of times” experience had its “worst of times” moments too. One day, we were climbing up some face or another in the canyon, and got myself in one of those situations where you’ve got your feet in two places, one hand in another, and you reach for another handhold, and then realize that you are spreadeagled on the rock, unable to move anything anywhere. Hmmm. “When you get in a tough spot, stop and think about it for a minute,” Specialist Sorensen always said. So I did. I stopped and thought for so long that my belaying partner (fortunately above rather than below) called to ask if I was okay.

Not really, I think I said. But the captain – standing safely below (in the “behind lines” command position favored by officers today) – didn’t want it to be a meditation class.

“What are you doing, Lt. Sibley,” he hollered up, “trying to hold that rock together?”

I don’t honestly remember what I did that day – probably just told my belay partner to take up the slack and brace himself, then let go of the rock and grabbed the rope, and tried another way up.

And after that second week, I went back to Ft. Carson and the mickey-mouse bullshit that the warrior class thinks up to keep the troops busy and amused when not at war (although other divisions were of course at war those days). But two weeks up the canyon with Pop Sorensen had pretty much spoiled me for all that. My stomach for American imperialism, which had been deteriorating all the way through four increasingly enlightening years of the higher education, pretty much bottomed out, and after a fairly stupid act of impotent rebellion, the Army and I parted ways, and I went to the mountains permanently.

But, for whatever reason or no reason, I never did any serious heavy-duty mountaineering after that, despite what was probably a pretty good basic preparation for it. Probably just didn’t hang out with the right group of hippies. But I have spent a lot of time in and on the walk-up variety of hills and mountains, and cannot at this point imagine not being close enough to see them on a clear day.

I also take a lot my lessons for living from the mountains – Mount Analogue is the mountain everyone who lives in the mountains eventually comes to. And one of the most difficult lessons to learn, for me anyway, is how to avoid getting spreadeagled in one’s own life – stretched out among choices badly made or not made (“all of the above” being what one wants but can’t have)….

“What are you doing, Lieutenant Sibley – trying to hold the world together?”

Sometimes you have to just stop and think. And hope you’ve got a good partner on belay.

This piece is an excerpt from The Climbing Zine, Volume 1 available on Kindle for .99.