Rambling In The Bugaboos by David Fay 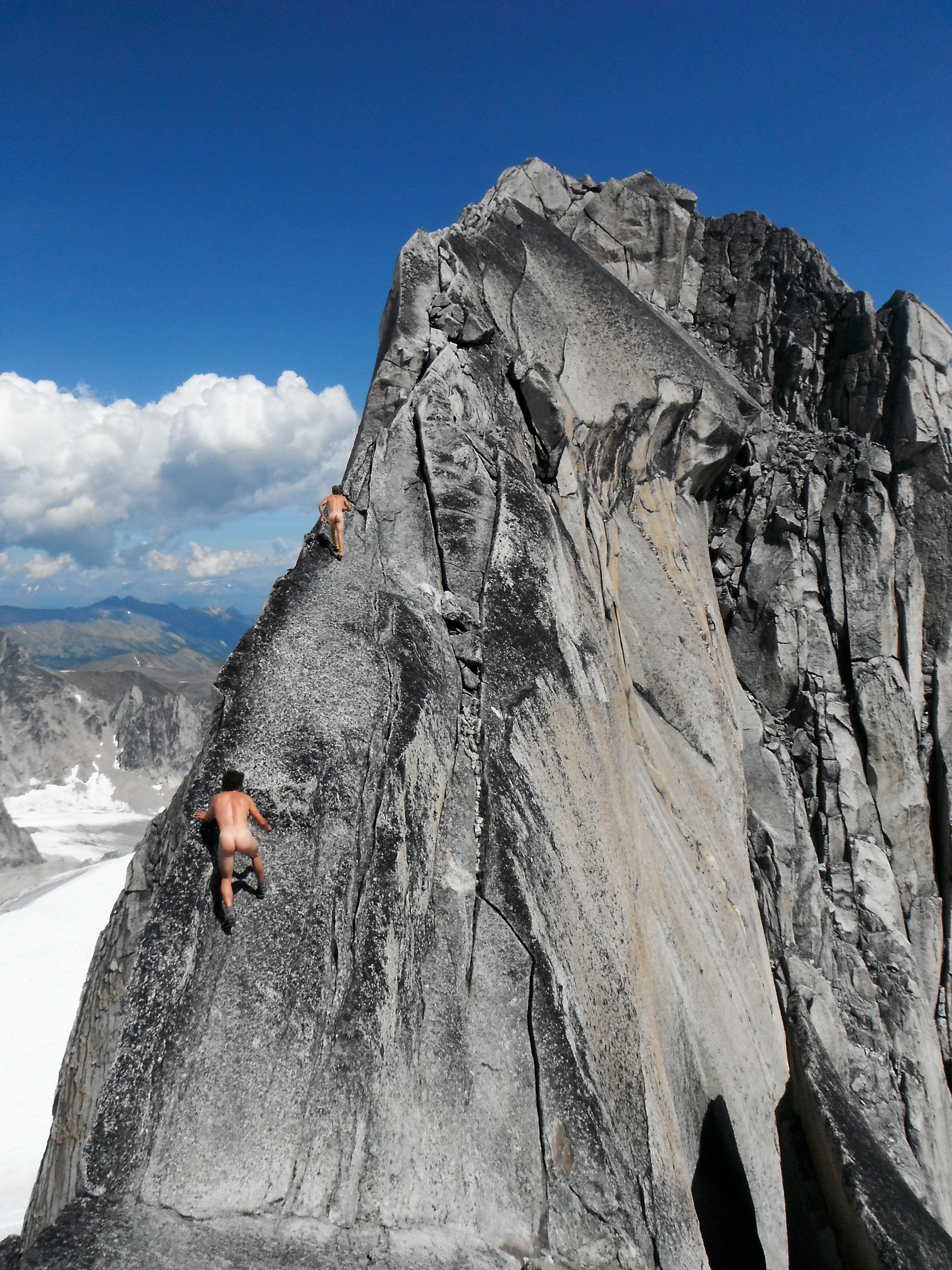 We rounded the bend and there were half a dozen people lining up at the base of the route. Rock climbing pioneers had valued the virtue of good clothing: well ironed shirts, collared and tucked. We paused momentarily—not because of the crowds but because of the publicity—before stripping down to our birthday suits and soaring up the route. With nothing to weigh us down, the next 14 minutes and 7 seconds were a blur as we scrambled up one of the most iconic ridgelines in North America.

by David Fay, spoiler alert this piece is an excerpt from Volume 6, available in print and on Kindle.

By the time July rolled around I was getting antsy. To be done with school and without work, I was not willing to let any more time slip by. I had to go north. This is the season to go big, I mean really big. And I had a plan.

I could get a ride as far as Idaho, visit family for a few days, train on Slick Rock (a thousand feet of 5-fun) and then hold up a sign along a lonely country road in Northern Idaho. Waiting to meet a stranger headed north.

Hitch hiking has been one of the most liberating experiences that I’ve embarked on in the last 22 years. Sure, you need patience and companionship isn’t too bad either. I had Jack Kerouac. Waiting along a quiet stretch of highway far to the north I found inspiration in Jack’s Lonesome Traveler. After one of his adventures his remark struck a cord, “You can’t fall off a mountain.”

And it’s best not to be in a rush to your destination, because that will take all the fun out of it. The first night I slept in an alternative commune outside of Sandpoint, Idaho. The second day I crossed the border on foot and stayed the night with a boy who had run away from home. The third night I was in East Creek Basin listening to Drew Thayer and Rowan Hills’ grandeur plans for All Along the Watchtower.

On the road I was dependent on strangers to make my journey. Often I would ask myself, “Come on, can’t I just be independent.” Then I’d do the math: one 50 pound pack, one 10 pound pack, two shoes and 419 miles. No way. Not if I wanted to climb on this trip. A web of strangers intertwined by this belief in good will picked me up and brought me north.

As soon as I set foot in the parking lot for the Bugaboo Provincial Park a switch flipped. I entered a new arena. Now self-reliance governed my path. Every decision I made would carry an array of risks and rewards. And I would be held responsible for these choices. I felt alive.

I slept under a boulder the first two nights to give Drew and Rowan space to chase their dreams. The second night I curled up with a mug of hot tea and a chocolate bar while a storm raged overhead. I started counting the time between flash and bang: one mis—BAM. The Howser Towers must have been struck dozens of times each minute. My friends had set out to climb North Howser Tower. I knew them to be both self-reliant and ingenuous in dire situations. So I trusted their skills knowing that I would wait twenty-four hours before being alarmed. They stumbled into camp late that night. Although their aspirations of climbing All Along the Watchtower had not come to fruition due to route finding difficulties low on the route, they climbed a fantastic variation, All Around the Watchtower. Scampering up the Vowell Glacier amidst the storm.

Soon afterwards Drew and I briefly set our sights on the Minaret. We had slept in that day and stood below the first pitch of what we could tell by the guidebook—and our own eyes—was 5.10 slab climbing without protection until you were through the hard climbing forty feet off the ground. Nevertheless I wanted to see what it felt like to be on the route.

Did the holds really get that much smaller? Was the angle less steep than it appeared? Through the start I could see that each move got progressively harder until the crux up high. So I racked up and headed up. Up into the unknown. After fifteen feet of steep crystal smearing I was already climbing at the edge of my comfort zone. I looked up. The positive footholds disappeared and the handholds were already long gone. I looked down, felt a moment of fear pass through me, and then swiftly and confidently retraced my steps to the ground.

So much for the famous Minaret, but the weather was splitter and despite the amount of climbing we had done in the last few days, we were psyched and rested. We had East Creek Basin to ourselves, which meant the route Fingerberry Jam was wide open. So at 5:00 p.m., I announced that I was putting on my harness.

That sealed the deal and within thirty minutes I was on the sharp end leading a splitter 5.11 finger crack. We continued through the crux in daylight and then Drew took off and climbed an immaculate rope length in the twilight. It’s strange how we climb the best when we’re committed and the sun is going down, Drew remarked.

After four phenomenal pitches characterized by spectacular cracks, bulletproof rock and a stunning sunset, the final stretch to the top was anything but that. With devious route finding, hollow flakes and suspect rock all covered in fuzzy black lichen, this pitch was some sort of page taken from a climber’s nightmare. By headlamp it held a Halloween allure. Yet with careful attention to detail and due diligence, it made a memorable finish to the route and soon we were atop Fingerberry Tower and scrambling back to camp.

With our food stores exhausted it was time to return to Applebee Campground and replenish supplies. Talk of hard routes on Snowpatch Spire quickly turned to the speed record on the West Ridge of Pigeon Spire.

Determined to beat his own record, Guy Edwards figured that he had to go as lightweight as possible—stripping down to the bare essentials. We rested atop the Pigeon-Howser col and finished the rest of our food.

Tactics included rinsing out the peanut butter jar with a protein shake and devising a centrifuge to attain the rest of the mayonnaise. With this final boost of energy we took off to the base of the West Ridge in the style of modern alpinism: light and fast.

In fact very light. We figured that anyone vying for the speed record must do so in the same style that it was set. We brought shoes and left everything else at the base. Soaring from the saddle to the summit in what we believe to be the fastest three man naked ascent of the West Ridge of Pigeon. We brought nothing and we were free.

David Fay is based out of Durango, Colorado. While away from the rocks he spends his free time brewing exquisite beverages, practicing yoga, running on trails, and slacklining in high places. No word on what the next objective is for the three-man naked speed ascent crew, but we’ll keep you updated.