Vertical Desires in the Midwest Flatlands by Dakota Walz 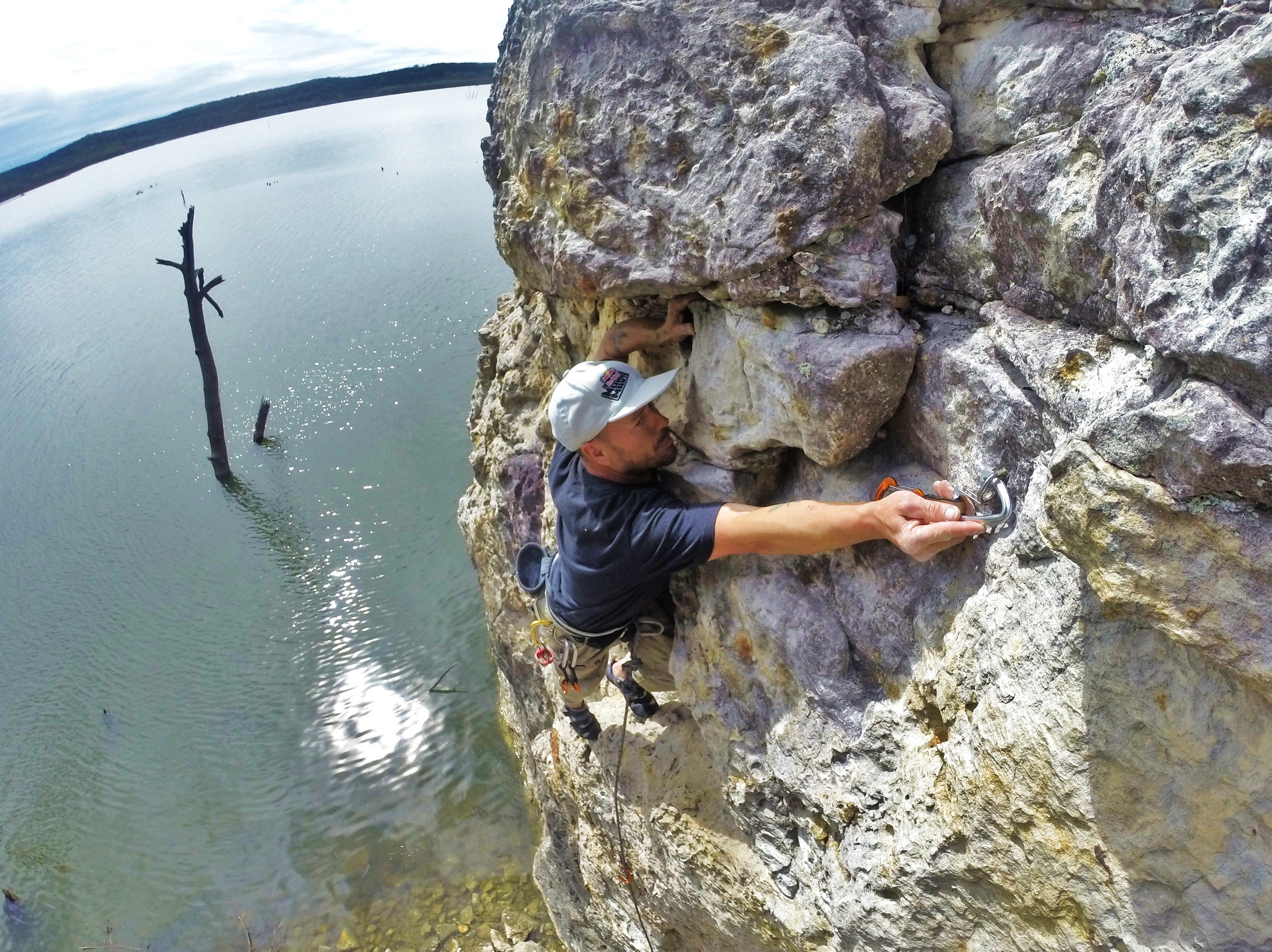 Morning light reflects bright off the white granite ledge as my pal Patrick is slowly pushing our rope up pitch 4 of the Muir Wall of El Capitan. A local climber of immortal fame joins me on the large ledge. We each quietly feed and take rope while enjoying the morning view of the Valley down bellow. He asks about the words “North Dakota” painted along the brim of my helmet. I tell him it’s where I come from, the greatest state in the Union.

Of course, as any climber would, he asks if there is anything to climb there. I tell him that it’s the 3rd flattest state in the country, but a desperate climber could probably find something worth their time out there. Living in the Midwest is kind of like living in the golden age of discovery for limestone choss piles, soft sandstone towers, and obscure boulders. There are still all kinds of new territory to be discovered. Untamed and unwanted cliff bands along lakes and rivers and prairies still waiting to be climbed. 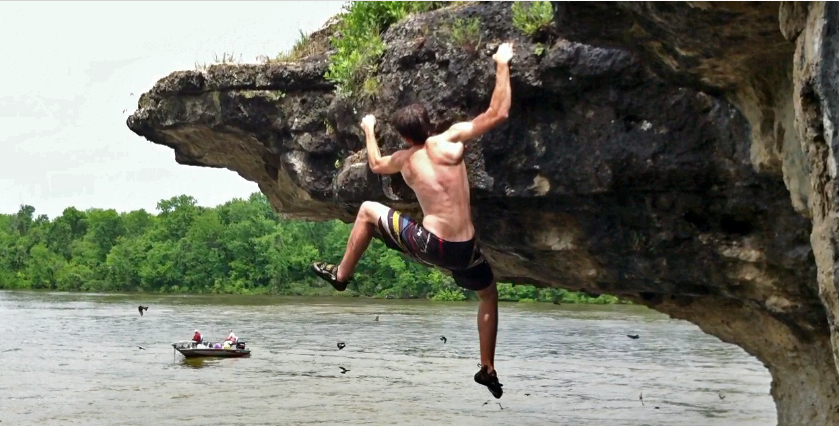 Coincidentally, a few months later I find myself driving across North Dakota doing just that. A crew of four flatlanders, our climbing gear, and an oversized canoe strapped to a homemade roof rack. We are out here in search of natural Midwestern beauty in the form of potential first ascents and island adventure. Some Google Maps exploration has lead me to believe that there may be something to climb in the far western side of my home state so, I thought we might go and find it.

Leaving west from Fargo, nearly 5 hours of nonexistence pass before our prairie road cruise ship reaches oil country. The marks of big oil rush over the highway in pipelines. They clog roads with bumper to bumper traffic in the middle of nowhere and detour us around miniscule towns made of only new hotels.

After battling gridlock traffic we pass through tiny New Town, ND and Lake Sakakwea opens up to us on the horizon. With her, comes our first glimpse of landscape and elevation. Hills roll high and low along the flooded reservoir banks while automated oil pumps rotate tirelessly forever across the ancient plains. When our destination finally appears on the horizon I know we are in for a surprise.

At least 1,500 miles away from any ocean, we are utterly landlocked. Yet, a monstrous deep green wave rises up to defy the endless flat horizons of glowing oilrig fires. 200 feet above the prairie, the grassy wave grows, until finally it crests and breaks; forming 45 feet of shear sandstone cliff line. This is Chimney Butte.

We hike to the base fast with the gung-ho enthusiasm of people starved of landscape. My excitement gets the best of me after I find what we now refer to as, “The Duke of Chimney Butte”. Amazing 5.11 splitter fingers cruise up a completely blank headwall. Before today, a feature like this existing in North Dakota couldn’t even form in my wildest dreams. Without wasting time, or much thought, we rope up and get to climbing our first route in our Peace Garden State. 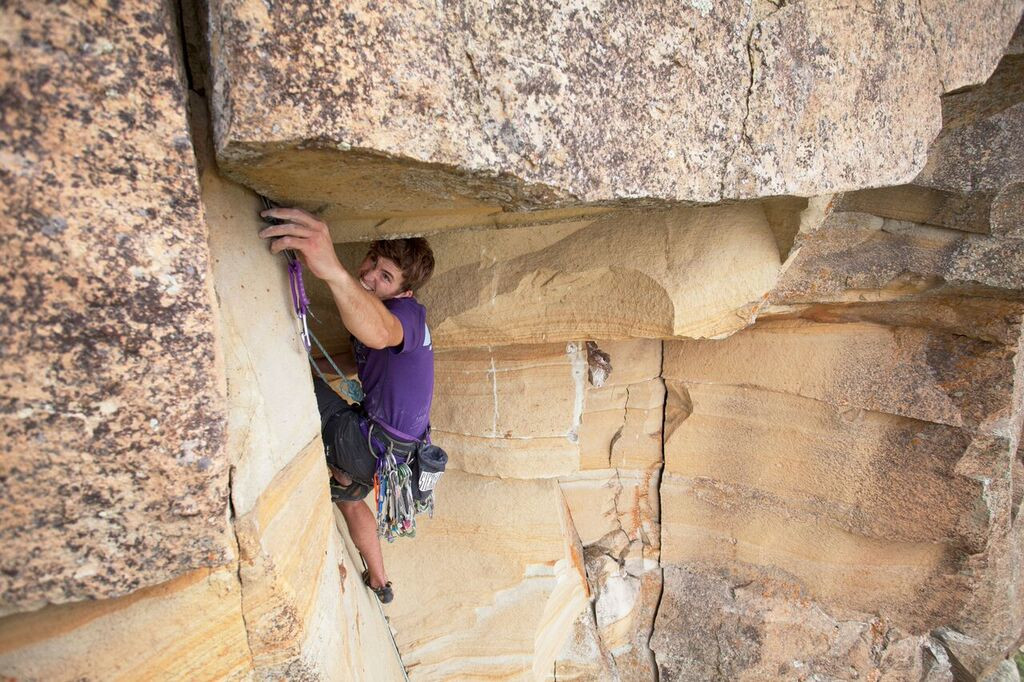 About halfway up is where “The Duke” starts to get serious. I know the sandstone is soft by any standard other than that of a flatlander so, I drive my .4 camalot in until the trigger is nearly hidden. The crack is even thinner than I anticipate but there are a couple pods to gun for. Another body length up and it thins out to barely tips! I drive my .2 in as deep as it’ll go. I’m passed the pods and I can see what looks like a jug a few moves up. Would it hold a desperate lunge? Had anyone yarded on it before? I’m about to find out, but thick lichen under my left foot smear crumbles and I fall.

I hit a small ledge and begin tumbling. I’m upside down now and am not slowing down much. I see Jasmin, my belayer, and she’s jumping high off the ground. Speaking of the ground, it’s gotta be getting close by now, right? Finally, I receive that violent, but welcome, rush of air exit my lungs as the rope suddenly denies gravity’s blood lust. Inverted I swing at the base of the cliff with tall grass brushing up against my head. Ooftah!

I’m not sure how that horizontal nut placement held, but it’s now earned a place on my “thank god for that piece” rack. We decide to leave “The Duke” for another visit and spend the rest of our day climbing easier looking lines.

At first there are no signs of climbers here before us. No pin scares or anything like the 8 deep tracks my blown-out cam placements left. But then, Matt finds some old tape gloves and sketchy dead-man anchors driven into the earth at the summit. I knew we couldn’t be alone in our need for adventure but it’s still hard to believe anyone else would be looking for it out here. Desperate climbers will always find something to climb.

Later that afternoon we cast off from the Fort Berthold Indian Reservation into Lake Sakakawea. The canoe is overloaded with food and booze but we easily cruise the soft current south. Again, we’re not sure what we’re going to find around the next bend of the river. My Google Earth exploration proved itself useful for rediscovering Chimney Butte, but who knows if that spec of land on the lake was going to be a cool island or just a forgotten sandbar? Either way we’re all in.

For two miles we are swallowed whole by the perfect blues of endlessly smooth waters and clear expansive skies. Suddenly, reds, yellows, and blacks rise high out of the water forming an eroded island butte. On its summit 50 yards of flat inviting grass carpet the island and hover high above the water. This paradise in the sky is Goat Island and it’s twice as large as I could have guessed. Maybe it’s been the hours of driving through flat nonexistent landscapes or maybe it’s just the company I keep, but the beauty of everything out here in North Dakota seems to outstretch my wildest hopes.

We land on the island, hump our gear to the summit, and build camp. We eat. We drink. We scream at the moon all the 90’s pop songs we can remember. If I live forever, surely this day of adventuring in North Dakota will be one of my favorite.

Soon we will be moving to Colorado and often folks ask me if I’m moving to find adventure. The answer is always the same: Yes, BUT adventure is everywhere. Especially in the Midwest! From North Dakota down to Missouri I’ve found adventure to be alive and thoroughly potent. 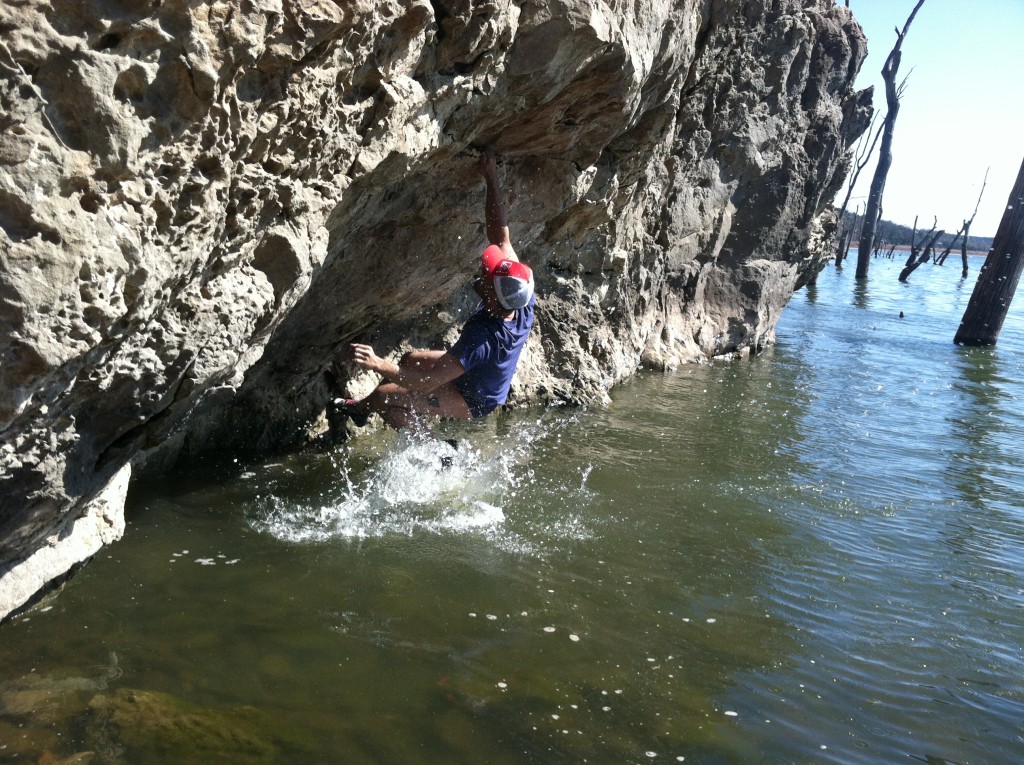 To find it though, you must be stoked. Your partners gotta be stoked too. You both gotta leave work early on Friday and hit the road immediately. You have to drive for hours. You must camp with your pals in the sticks. Then, you need to crush all day long, all weekend long to make it worth the effort. After all that you gotta spend your whole Sunday afternoon driving home so you can wake up for work Monday morning.

The Midwest rears folks who thrive off the stoke. Out there in Colorado my biggest fear is becoming spoiled and jaded on the couch or sleeping in my soft safe bed more than ever.

Have people explored, named, and claimed these places already? Sure. These rocks are ancient and have been discovered hundreds of years ago by the Natives and later again by the white settlers and pioneers. It’s not easy to be a genuine explorer in an era where nearly everything has been seen and recorded.

As a climber though, there is still the unique opportunity to discover, not uncharted territory, but untapped potential. The moment a climber discovers these forgotten geological forms is when their true purpose ultimately takes shape. This is when true discovery and adventure take form once again as the first ascent.

As a living breathing namesake, Dakota Walz represents the few unlikely big wall climbers to come from the 3rd flattest state in the union, North Dakota.