The Sisterhood of the Rope by Rhiannon Williams 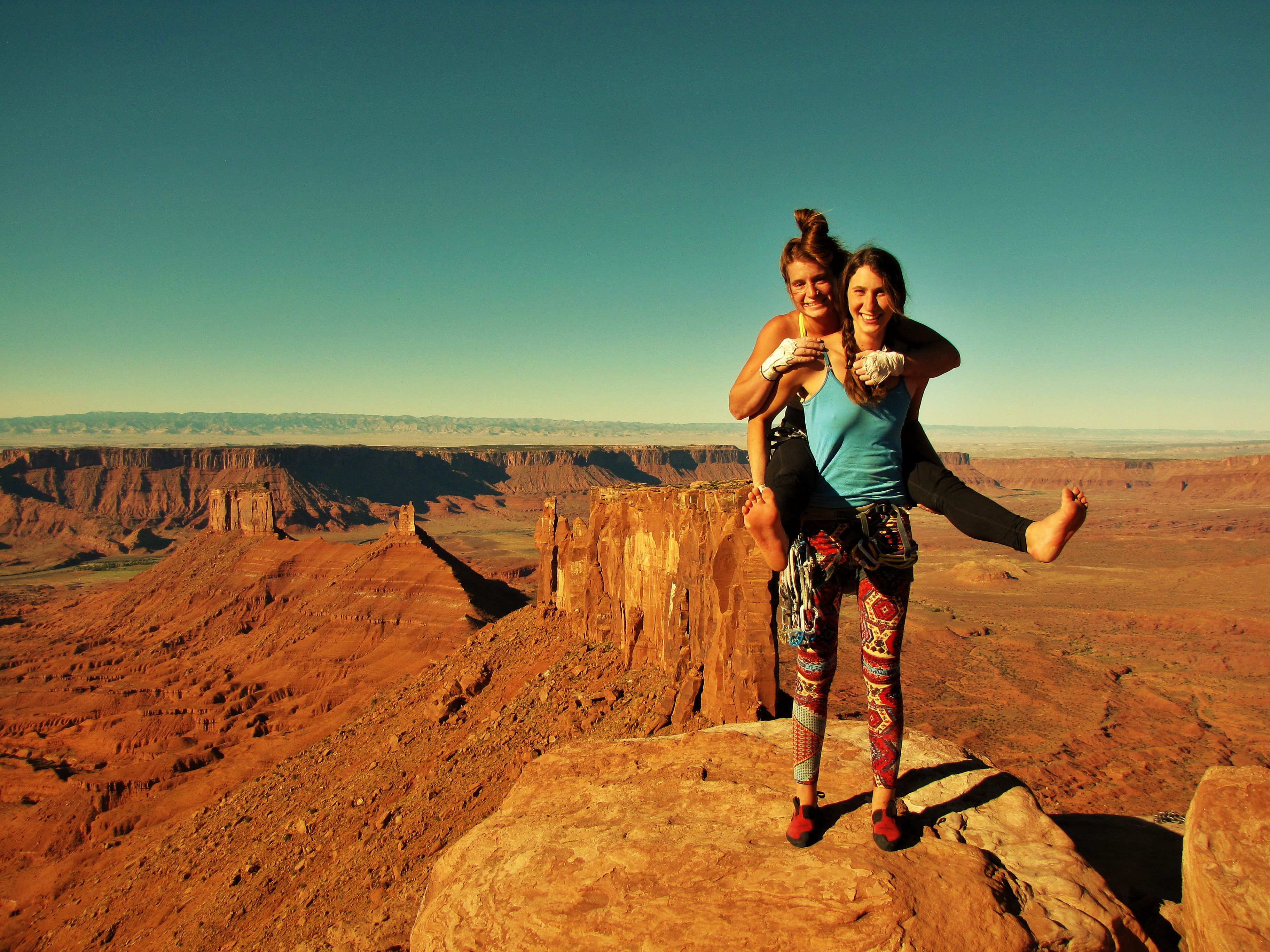 We pull into the Supercrack parking lot in a rusty, mud smothered Subaru, named Shelly. The lot is dotted with similar vehicles, their windows all dusted by relentless desert sand, (some of which have been decorated by a climber’s tough calloused finger). Shelly the Subie has been with my friend Amy and I since we first met at an orientation for wilderness therapy work several years back.

Shelly holds secrets: secrets of excited conversations about climbing goals we’re not yet ready to share with the world, secrets that we barely dare to share with each other, whispers of secrets that skate between our subconscious and conscious, not yet formulated into concrete thoughts. There’s a lingering buzz of energy held within her frame that encompasses exhaustion alongside elation and anticipation. In the center console, there’s a giant Cosco container of jellybeans, which we’ve shared over climbing banter and whatever else fills the space: relationships, art, travel, boys and other silly things. Amy and I hatch plans for climbs all over the world in that rust-mobile, but what really get’s our brains whizzing into high gear is when the topic turns to emboldened women accomplishing epic feats on rock.

As we clamber out of the car and start to think about getting our tangle of gear situated in to an acceptable situation, Amy and I talk about how intimidating the Creek is. The walls are sheer and smooth, separated by dramatic dark cracks of all sizes and at first glance, it’s difficult to imagine how exactly one “climbs” with nothing to hold on to. We’d both been here before on separate occasions with old boyfriends.

Both of us had memories of following the boys around and top rope heroe-ing, figuring these climbs were probably out of our league anyway. This time, we were ready to take it on. We were ready to get scared. To try hard, to fail, and to push ourselves beyond the limits we perceived to be bound by. I’ve noticed that these “limitations” tend to slip further into our peripheries, when we climb with other females. 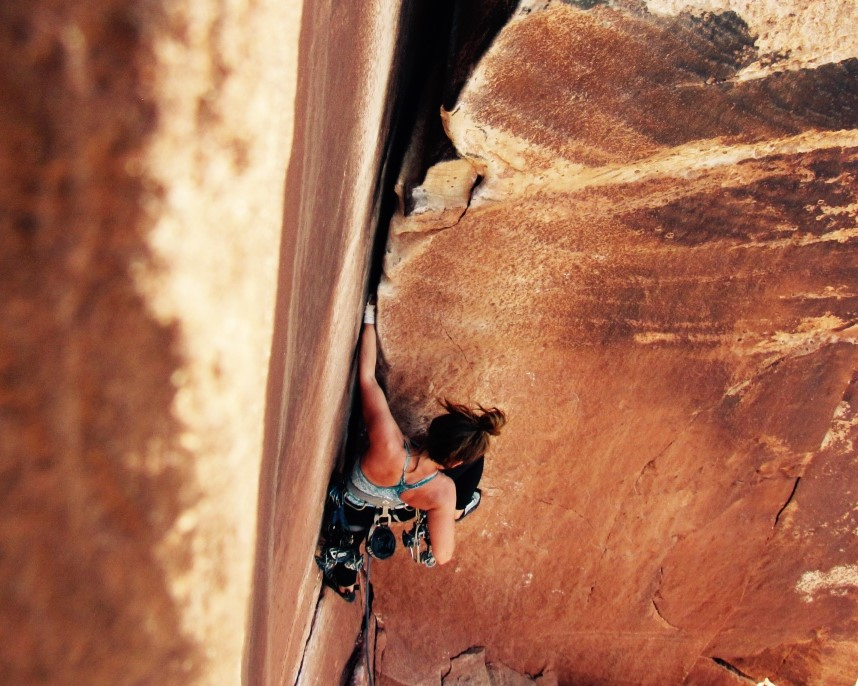 As we approach the ominous walls, we notice something interesting and somewhat unusual: the splitter cracks are lined with women, grunting their way up off-widths, jamming taped hands and yipping of relief and pride as they reach the chains. Our friend Jane gracefully dances up a thin hand crack with confident rhythmic movement: finger stack, toe jam, smear, repeat. She’s stronger than she thinks she is. The energy is infectious, and has set an unprecedented pace for our trip. I marvel at the way our brains manipulate and decode the routes in the guidebook, letting the “way too hard” routes morph their way into the “maybe we can try this” category. We slowly work our way up the grades trying something a little harder, and then just a little harder. We get the elvis leg, we get pumped, we take falls, and we learn to push through our fear. We start to talk about doing bigger and bigger climbs. Where is the limit? There is no limit.

Magical desert storms begin to roll in and soften the Windgate sandstone, so we start to look for clear weather. The obvious next step is the classic testing grounds of Yosemite. We pack up Shelly and hit the road. Our tummies ache, but it’s impossible to know if it’s a result of the jellybean flavor combos we’ve consumed (like licorice with popcorn and strawberry cheesecake), the full belly laughter that’s defined the trip thus far, or the nerves we feel as we move towards the Sierra Mountains. Halfway to the valley, we find that the highway has been washed away by a recent flash flood, so we look for alternate routes. Shelly slides all over the place as we navigate the almost washed out back roads. I grip the steering wheel, hoping we won’t get stuck in the creepy town with The Cherry Patch brothel. Eventually, we find a way through and make it as far as Bishop. Although it’s taken almost twice as long as it should have, we revel in the adventure of it all, we revel in the unknown. 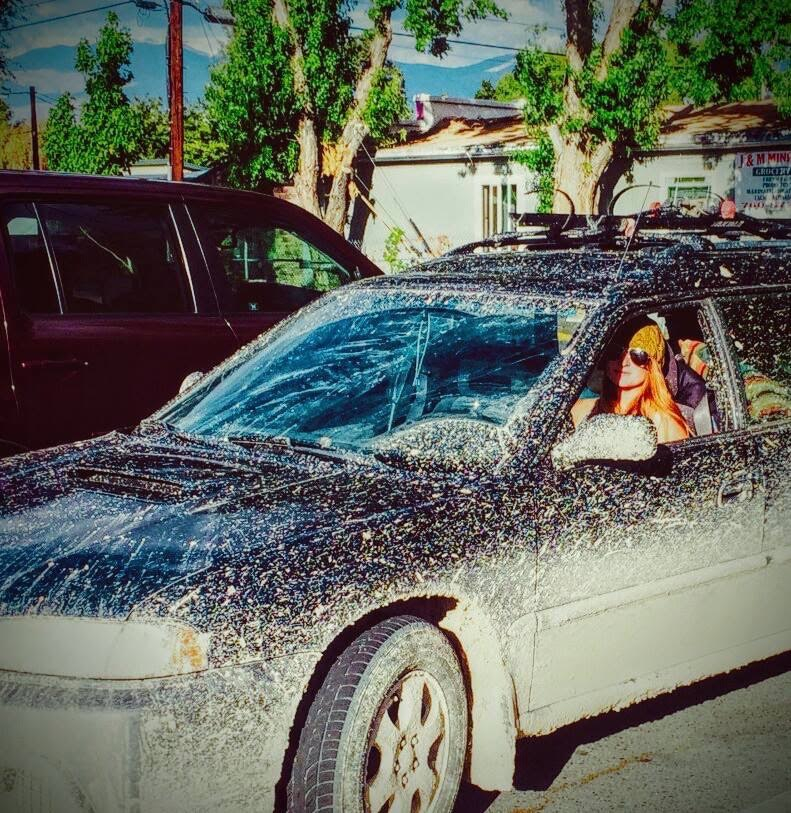 Waking up in the Buttermilks, I take time to drink my coffee and try to capture the fairytale beauty of the landscape in a sketch. We decide to climb the plump Grandma Peabody boulder, a 5.9 classic free solo, our hearts fluttering just like the designated symbol in the guidebook. Nearby, a climber falls off one of the giant egg boulders and breaks his heel, an injury I’m all too familiar with. I have a moment of panic, remembering the very real consequences of the sport I adore. After the buttermilks, we drive through the night to the valley. I’m grateful that it’s dark. 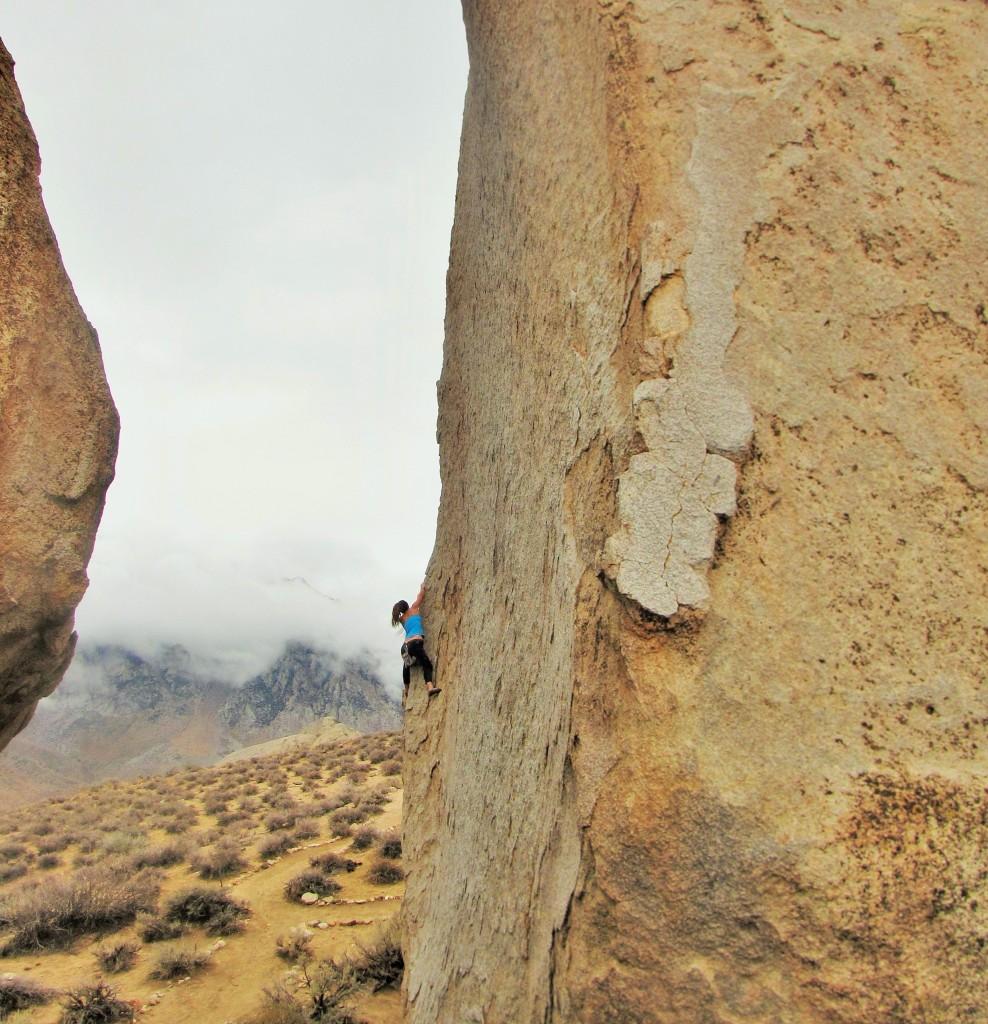 After several days of contemplation and, perhaps, avoidance we decide to try the East Buttress of El Capitan, a goal we’re not sure we’re ready for, but we start up the talus field approach anyways. Sleeping at the base of the climb the night before, Amy is afraid of bears. I’m afraid of the crux pitch, described as a scary technical move smearing on tiny edges with a consequence of a pendulum swing into your belayer.

I secretly like the fear. My restless energy keeps me from sleeping that night and I free solo up the start of the route, a slick 5.6 chimney, to think. There’s a little memorial up there under a twisted tree that grows out of the rock, reminding me once more of the potential consequence of misjudgment, error, or poor rock quality.

The next day, we go for it. We move through each pitch without a hitch and are surprised to find ourselves at the top within 7 hours. We forgot our shoes, so we hike the 3 hour descent barefoot and bruised-toed. We hobble cautiously with dirty taped feet, laughing the whole way. We wonder, what’s next?

As we drive out of the valley, and back towards home I have a smile fixed in place. Our elbows are bloody and our hands are sticky with a film of grey gunk, a residual from our many attempts at tape gloves.

We are proud of the battle wounds and what they represent. For me, they represent the years of work that I’ve done to move away from a world where the value of a female lies in the hand of the admirer. I feel grateful to be surrounded by inspirational females, like Amy, testing themselves and testing social constructs, which tell them what they should be and do, what they should look and act like. I’m grateful for a sport that inherently challenges those constructs, as well. As I drive, I realize that this trip will hold a significant diversion in my story. I realize that there’s been a shift, and that I’ve started to punch through the glass ceiling so carefully crafted for me all those years growing up. I’m relieved that it’s light outside, and that I can see the beautiful granite walls rise around me.

This is Rhiannon Williams first piece for The Climbing Zine. She is also a talented artist and will be working on some illustrations for the next issue, Volume 8, dropping in the Spring of 2016.