The Sharing of The Rack

I’ll never forget it — we were three newbie climbers racked up for Supercrack in Indian Creek when an older climber approached us. He had several #3 Camalots in his hand. Without saying anything more than, “you’ll need these” he simply handed them over. We did need them. My partner, Tim, was racked up with mostly #2s. He was able to adequately protect the climb, and we thanked the kind stranger countless times before we gave them back.

by Luke Mehall, author of American Climber and publisher of The Climbing Zine (cover photo by Mike Shaw.)

note: The Climbing Zine, Volume 9 will be released this Friday. Order the print version here.

When I first started climbing I was amazed by how quickly climbers shared. I was raised in Midwestern America, where I was taught good values, but also capitalism. We work hard for our things in America. And we alone use these things. That’s the way the system is structured. He who dies with the most toys wins. 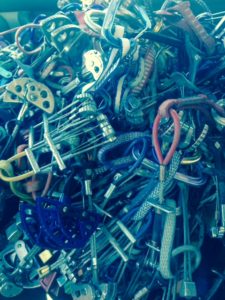 Climbing shattered the illusion that everyone is like that in America. I started to notice that the rack of gear was often the most expensive thing that climbers owned. Sometimes their cars were worth more than their racks but oftentimes not. And they would freely let you borrow those cams in order to ensure safe passage up a route. That was something new, and I liked it.

Expensive things in the climbing world always had a purpose. Not so in the everyday world. Is there really a purpose for a Maybach? Sure, rappers love to rap about them, but is there a reason for a car that costs more than most people’s houses? Is there a reason we worship diamonds and gold? In the end do those things really have a true value?

There was always a reason for an expensive climbing thing — whether it was that rope that tethered you to your partner and the world, that cam you were taking a whipper on, or that portaledge that you slept upon above the valley floor. This gear elevates our existence. Sure, it’s not cheap. It’s not even necessarily pure in its invention—plenty of climbing gear has been refined by war, like nylon ropes. But if you are planning a climb, and in need of an essential piece of gear, by God a good friend will hand you theirs without hesitation—and you should do the same for them.

It’s been seventeen years since that incident where the random old school guy hooked us up with his cams. I can still picture his generous face although I don’t have a name to go with it. That was when we had single racks of cams, and thought that might just be enough. Now, we’re older and we realize you can simply never have too many cams, at least if you climb in The Creek. And, it’s our job to look out for the youngsters.

Just last weekend, my young hippie buddy Cody was racking up for a classic Creek pitch, Bromancing The Stone, at the Beyoncé Wall. Like us back in the day, his rack is small, but his enthusiasm is big. We took a look at the gear beta together and I helped him fill in what he was missing—mostly #3 Camalots.

He had a battle, we could hear shouts and grunts for an hour around the corner as we did out own climb. Finally, he clipped the chains. I asked if those #3s came in handy.

“I couldn’t have done it without you,” he said.

Luke Mehall is the publisher of The Climbing Zine, and author of Graduating From College Me, American Climber, The Great American Dirtbags and Climbing Out of Bed.