Stoner’s Highway by Luke Mehall (an excerpt from American Climber) 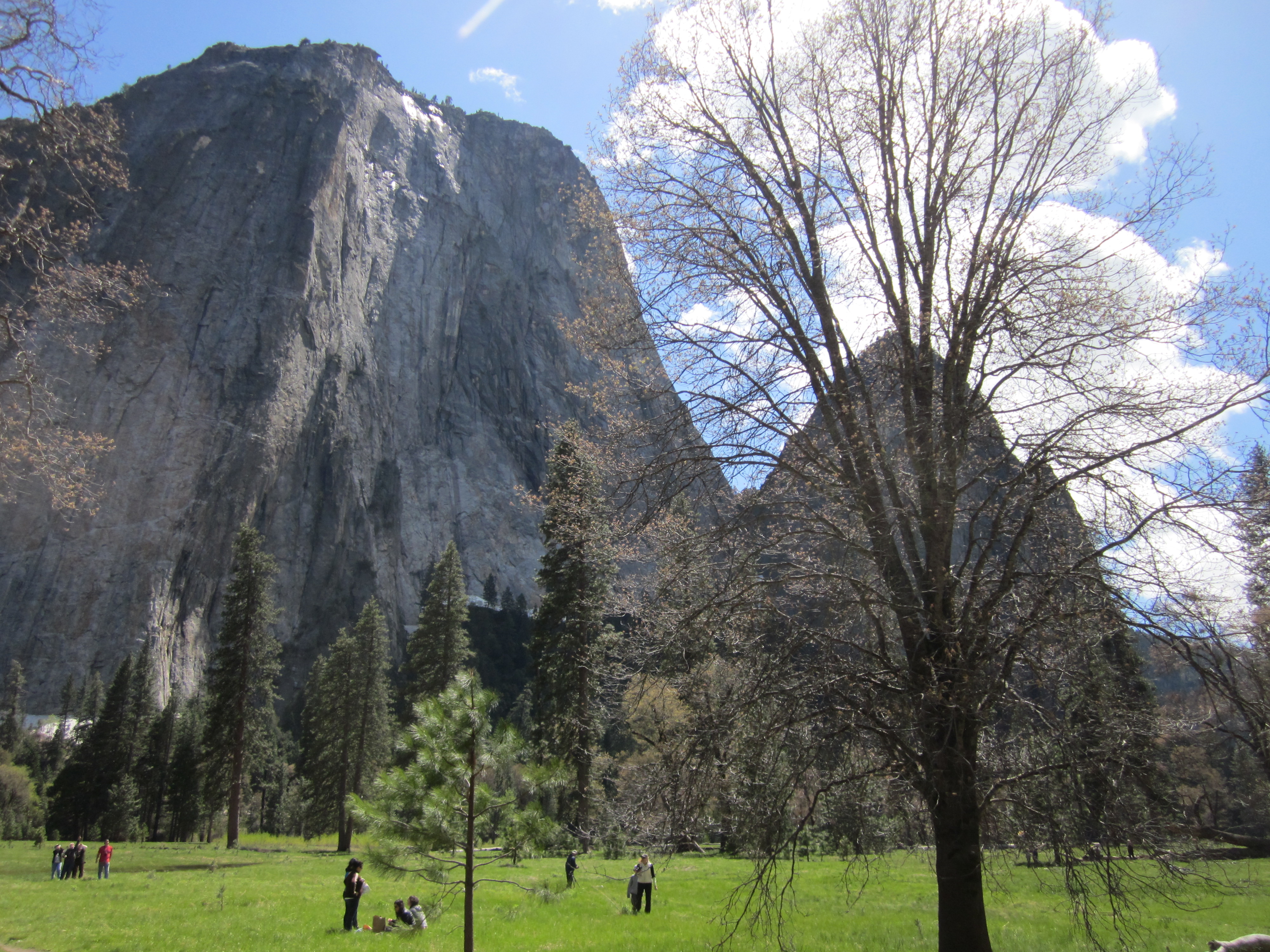 I figured that it would be just a regular outing on the rock that would pose only minor difficulties given the 5.10 rating, and the fact that I’ve been climbing at the grade for ten years.

This piece is an excerpt from his latest book, “American Climber”. A version of this story was also in “Climbing Out of Bed”.

We jokingly dubbed ourselves “Team Breakup” while hiking up the trail to the wall. I was more than eager to do some longer climbing; we’d been festering around the short, one pitch, well travelled climbs for the last few days, and I had the itch to get a few hundred feet off the ground. With a game of rock, paper, scissors, it was decided that I would start out with the leading; an easy, but loose and crumbly pitch led us up to the beginning of the more difficult climbing.

I’ve always found that when space is gained into the vertical, above the ground, my head space becomes different as well. Reflection is natural when looking around you in the vertical world, and in nature. That day, my thoughts were with Lynn; they were thoughts of guilt. I’d led her all the way out to Yosemite to realize that my own selfishness was at the heart of the journey. I wanted to experience being up high on the walls, and she was a beginner, and we were broken up. How did everything happen so fast?

The meditation and reflection of hanging on the wall is gained through climbing. This day the climbing demanded some serious focus, much more than I had anticipated. After my first mellow lead, it was Scott’s turn on the sharp end of the rope. I watched him climb twenty five feet to my left, with no gear off the belay. Had he fallen, he would have violently come swinging back my way. So falling wasn’t an option. Scott brilliantly completed the sequence, secured more gear, and then climbed another run-out section. He arrived at the belay, and then I cleaned the pitch, and soon it was my turn for a run out lead. 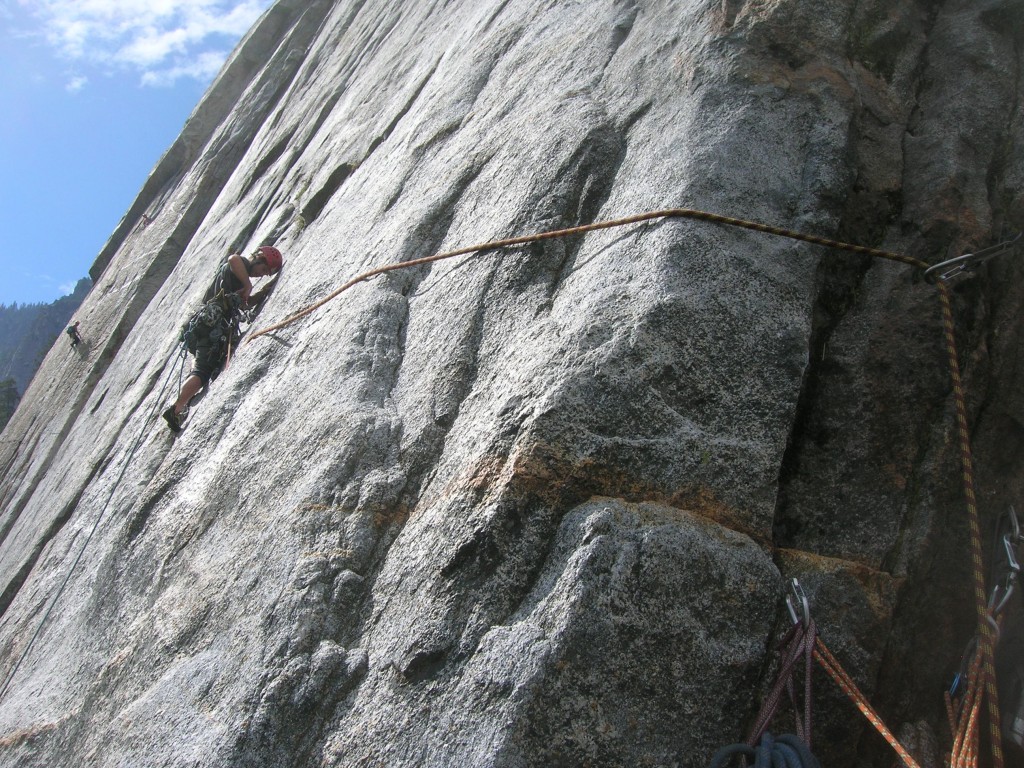 Scott Borden running it out on Stoner’s Highway.

Scott had set the tone with his incredible, delicate, climbing, and I was determined to emulate his style. I climbed up off the belay about five feet, clipped a piton, a relic from the seventies, all rusted, a ‘maybe’ piece of protection, as in if you fall maybe it will hold. Then I climbed twenty feet out to the left, heading for a crack system. At this point I was on a small perch, contemplating my fall with the toes of my feet on some good footholds, my hands on some decent holds as well, eyeing the next moves to get to where I could place some pro in a crack that would hold a fall. It’s at this point in climbing where complete focus is necessary. I zoned in to the moment, delicately stepped up eyeing a handhold, leaned into it, and stepped up to where I could place some gear. I was safe again, and climbed up a decently protected crack system to the next belay.

Stoner’s Highway demanded this type of dangerous, delicate, in the moment type of climbing, pitch after pitch. Scott seemed to get the most difficult pitches, with thirty and even forty foot runouts on 5.10 climbing. He told me he didn’t think he could have done the moves if he hadn’t just broken up with his girlfriend, and was in the state of mind he was in. I don’t think my breakup figured into my risk taking. I just wanted to be up climbing on the wall with a friend, and reflect.

We made it up to the ninth pitch, and it was my turn to lead. The first bolt was a good twenty feet up above the belay, and I couldn’t confidently reach it. I climbed back down to Scott, and he went up. He felt the same about the risk, it was too much. We rappelled back to the ground. 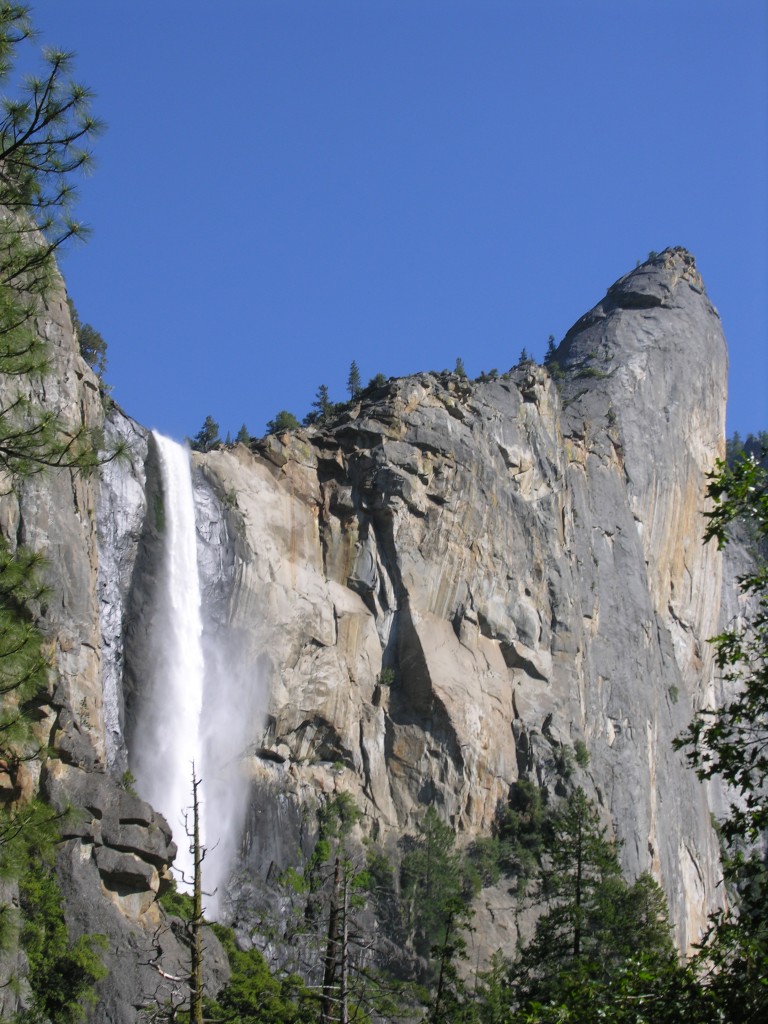 Rappelling is usually the scary part, but this time there was relief in the air. We didn’t complete Stoner’s Highway, but we’d done enough mind clearing and thought provoking climbing I felt the same piece of mind I get after doing a big trad climb. That clarity of being in the moment, the feeling that life is one crazy ride and you just have to roll with the punches, know when to fight and when to run away. We ended up running away on Stoner’s Highway, and never came back; to speak for myself I don’t know if I could ever get the nerve to go back. But it was the perfect climb for that moment of recklessness, that feeling of abruptness a breakup can induce. And we both had the satisfaction we didn’t give into the craziness, and believe that we could do something dangerous that we shouldn’t have. The closure of that breakup didn’t come for months, even years, but I had clarity.

Luke Mehall is the publisher of The Climbing Zine, and author of American Climber, The Great American Dirtbags and Climbing Out of Bed.