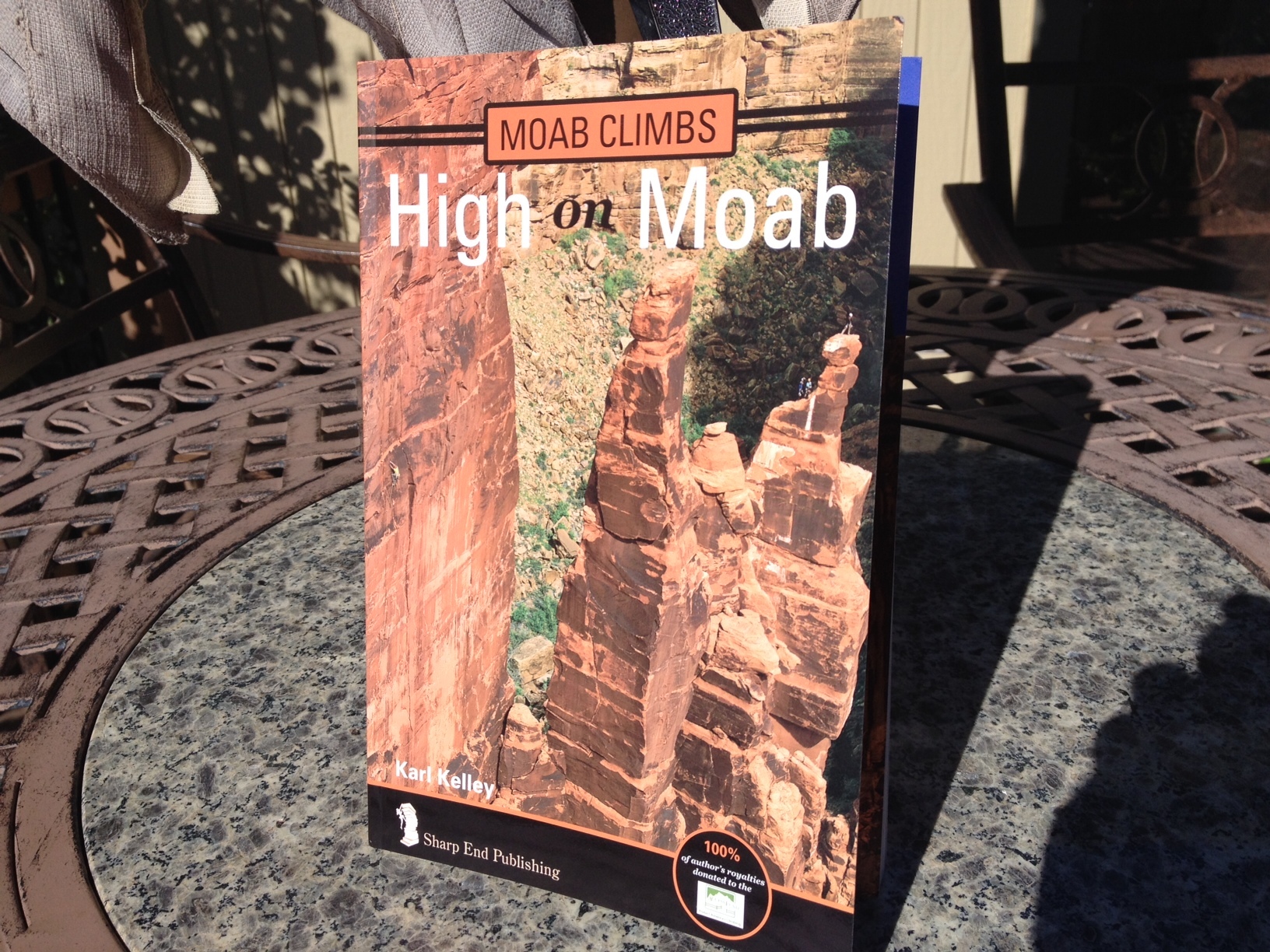 “This book is a gift…Karl’s gift to you,” writes Fred Knapp from Sharp End Publishing, in the foreword for the new guidebook, “High on Moab” by Karl Kelley. I can’t think of truer words to start off my review.

Reviewed by Luke Mehall, publisher of The Climbing Zine

“High on Moab” is a perfect addition to Eric Bjornstad’s “Desert Rock” series, and the jabbering-drunken monkey in your ear that is Mountain Project beta. In short, it is three hundred plus pages of inspiration to “go far and see deeper” in the greater Moab, Utah region.

The sheer amount of rock in the greater Colorado Plateau region is staggering, the sandstone buttresses and towers seem to stretch on forever. The connection to get climbers out there on many of these routes, and not just the classics, seems to be information. Now with Kelley’s new book, many climbs are more in reach, for us visiting climbers.

“This book is going to get me on so many more routes I would have had no idea about,” remarked a friend and desert crusher, Adam Ferro. (Ferro is featured in the book on his first ascent of Hidden Gem, a 5.13 on the Town Wall.)

“High on Moab” basically covers all the major areas near Moab, with the exception of Indian Creek, for obvious reasons. From Canyonlands to Castle Valley, bouldering to aid, there are countless routes to drool over in this book.

The photography in this book is absolutely stunning. No Moab guidebook comes even close to representing the images that are featured in Kelley’s book. Kelley captured many of these images himself, alongside work from the leading climbing photographers in the game right now. Images of beautiful splitters and slender towers create a feeling of “I must climb this” which will surely be getting us all into trouble for many years to come. 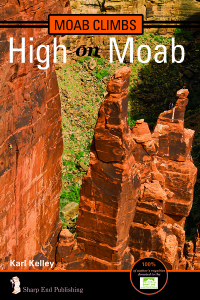 Kelley does a great job of giving tribute to his mentor and a legendary name in desert climbing: Jay Smith. Anyone who has gotten off the beaten path a little bit in Moab knows that a “Jay Smith route” is going to be visionary and high quality. Routes like Holier Than Thou on one of The Nuns in Castle Valley, Sacred Ground on Castleton Tower, and Infared on the Big Bend Butte, connect cracks and faces, creating some of the best climbing in the desert. Jay’s hand drawn topos are scattered through the book, and you can bet that a “Jay Smith route” is worth getting on.

My main criticism of this book, and from talking to others it is a common critique: is the gear beta. There are some sandbags in here, on at least a couple of well travelled classics. First off: Jah Man on Sister Superior. This classic is perhaps the best 5.10 tower in the desert. The book recommends only three #1 camalots for this climb. I’d say bring six, especially if 5.10+ is at your limit. The third pitch of this route takes mainly #1s for its eighty some feet of climbing. And then there’s the North Face of Castleton. The modern standard start takes #3 cams for days, and then has an off-width pitch up high. The book recommends bringing only four #3s, while six to eight is more like it. Also, off-width gear is key for the last pitch, and the book doesn’t recommend bringing anything bigger than a #3. Common sense and a check of Mountain Project beta is probably a good idea when deciding what gear to bring on any desert climb, in addition to the gear beta in this book.

Guidebook authors often get thrown under the bus in the climbing world. They spend an incredible amount of time doing the research and putting the book together, and rarely get thanks; climbers only talk shit about what they did wrong. I hope Kelley’s book will be perceived like Knapp suggests, “as a gift”. It’s already motivated me to try some different lines in Castle Valley, my favorite place listed in this book, and hopefully it will inspire more climbers to be adventurous when exploring the Moab region.

Another reason I think this book will be appreciated, is Kelley’s generous gesture to donate all of his royalties to the Access Fund. There’s no denying that “High on Moab” was a true labor of love.

Last week, after doing a lap up Fine Jade on The Rectory, we were rappelling, and stopped at an anchor with another party headed upwards. The topic of “the new book” came up, and one of the climbers asked me, “Is it worth getting?”

Without hesitation, I replied, “Absolutely”.

“High On Moab” from Sharp End Publishing. (on Amazon)