Oh Baby I Like It Raw, New Routes In The Desert by Luke Mehall 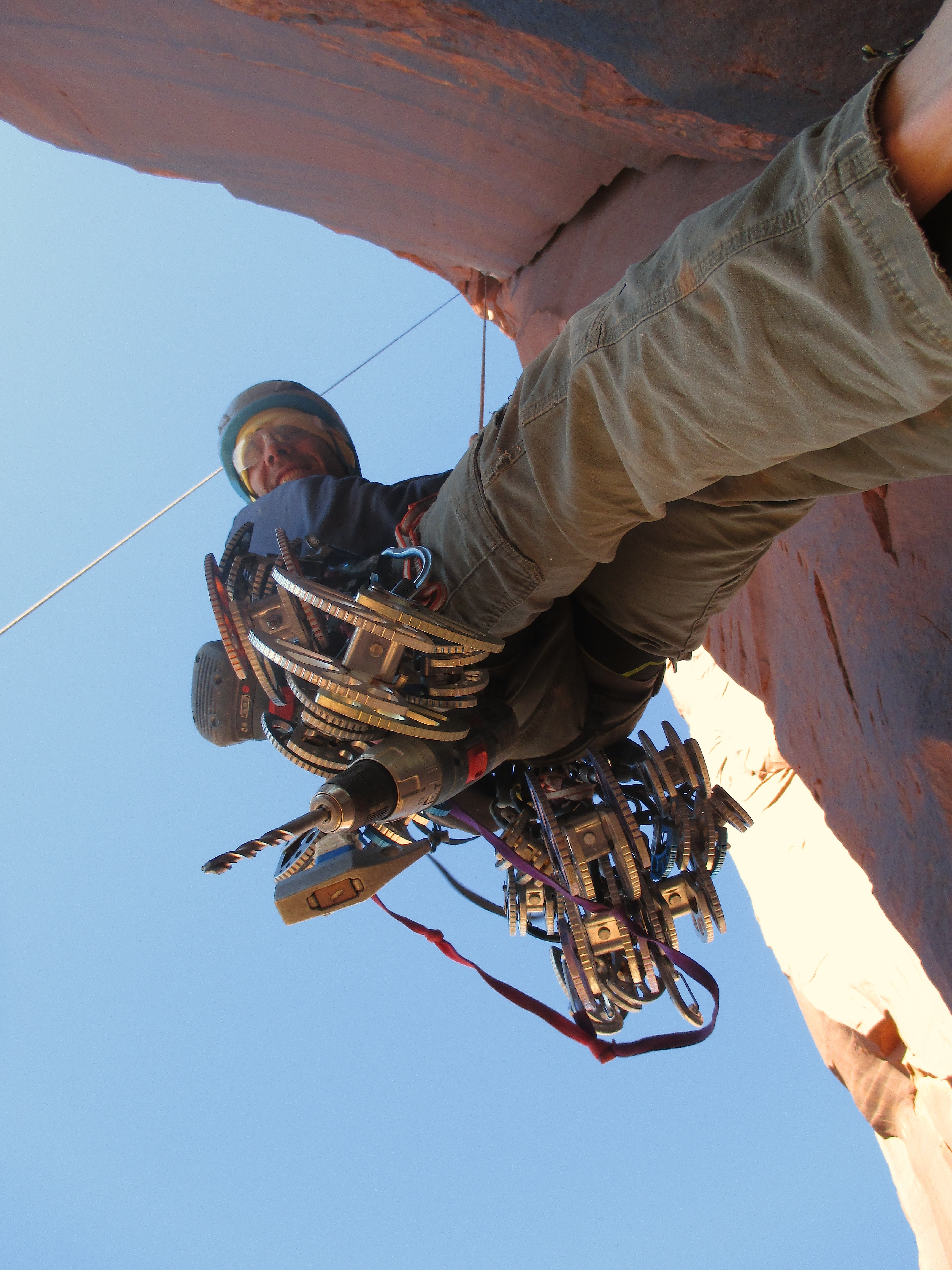 It’s a fine line between work and play when developing a new splitter crack. Of course that crack isn’t new; it’s been there longer than you and will remain long after our spark of existence that we call a lifetime. But, to uncover one, to climb and clean it, is satisfying, in both a blue-collar and dirtbag way.

by Luke Mehall, publisher of The Zine, author of American Climber. This piece is an excerpt from his fourth book, Graduating From College Me

I’d dabbled in granite new-route development for a decade or so, starting with hand drilling at the local crag up in Gunnison and finally borrowing a power drill whenever one of the older climbers would let me. It’s hard to mess up on granite; the rock is so good, and it always takes a bolt.

Sandstone is different. It’s easy to drill a sketchy bolt in sandstone. I’ve taken bolts out by hand at anchors on popular routes in Indian Creek. Usually, it’s because of an intense direction of pull on the bolts, but sometimes it’s just because it’s shitty, hollow rock. Bottom line is that you trust the first ascentionist quite a bit when using their anchor bolts.

Our crew began putting up new routes after we’d regularly armed ourselves with drills for anchor replacement at the crags. For a while there, it was guaranteed that you would find an anchor on a popular route that needed some love. So we pretty much always started climbing up with a drill and bolts. Inevitably, on the edges of popular crags, you can find some unclimbed cracks.

A few cracks just need a quick brushing, and they are good to go. These are the rare ones, especially in the modern context of Indian Creek. The obvious splitters were established years ago. The leftovers aren’t too shabby; they just demand more elbow grease.

Most Creek climbs have to go ground up, not necessarily out of a tradition to ethics but out of necessity. Occasionally, you can get “two for one” by climbing a nearby crack and then swinging over and cleaning its neighbor. That’s a good technique when a death block looms above your head, and you don’t want to delicately dance around it all for the sake of a new line.

Ultimately, though, you’ll be climbing on something that just an hour later you’ll pry off with a crowbar. But sandstone typically makes sense, and a loose pillar can usually hold body weight—you hope, at least.

They say that the granite on El Capitan is like an onion, and it comes off in layers, exfoliating in time. If that’s the case, then the sandstone of Indian Creek is kinda like Jenga, blocks that aren’t attached and can be cleaned with the proper tools, like a hammer and a crowbar. 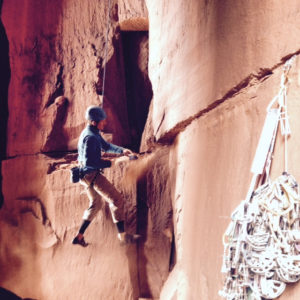 It’s often dusty, so I carry a bandana in my back pocket and sometimes even ski goggles. Often, a battle with a loose block can last up to an hour. It’s you versus the rock. With the really big ones, your only real tool is the crowbar. You just have to move the block enough so that gravity will accept it and trundle it down the hill. It’s an inches game, and with every inch you move it, you’ve got to make sure the block won’t catch onto the rope when it finally is broken loose. When it eventually does go careening down the hillside, you just hope it didn’t fuck up a chipmunk’s day or any other wildlife just having a fine day in the sun when this massive chunk of sandstone comes a-crashing.

Another fun phenomenon in the Creek is the mud-filled crack. Some cracks are just funnels for storms, and while they look sexy and perfect, in reality they are dirty and flawed. That’s when it’s time to really roll up the sleeves and get to work. One climb out at the Creek that we dubbed Ol’ Dirty Bastard, after the famous Wu-Tang rapper, was so dirty it took hours upon hours to hammer the mud out of the crack with a crowbar. It was one of those climbs when you just wished you’d never started because of how much cleaning it required.

In the end, the best part of a first ascent at the Creek is establishing something that will push you to try your absolute hardest, a line that will leave you sleepless at night, obsessing over the moves, and one day, after countless attempts, will finally go and leave you contented, for the moment.

Luke Mehall is the publisher of The Climbing Zine. Graduating From College Me, A Dirtbag Climber Grows Up, was published last fall, and is available in print and on Kindle.