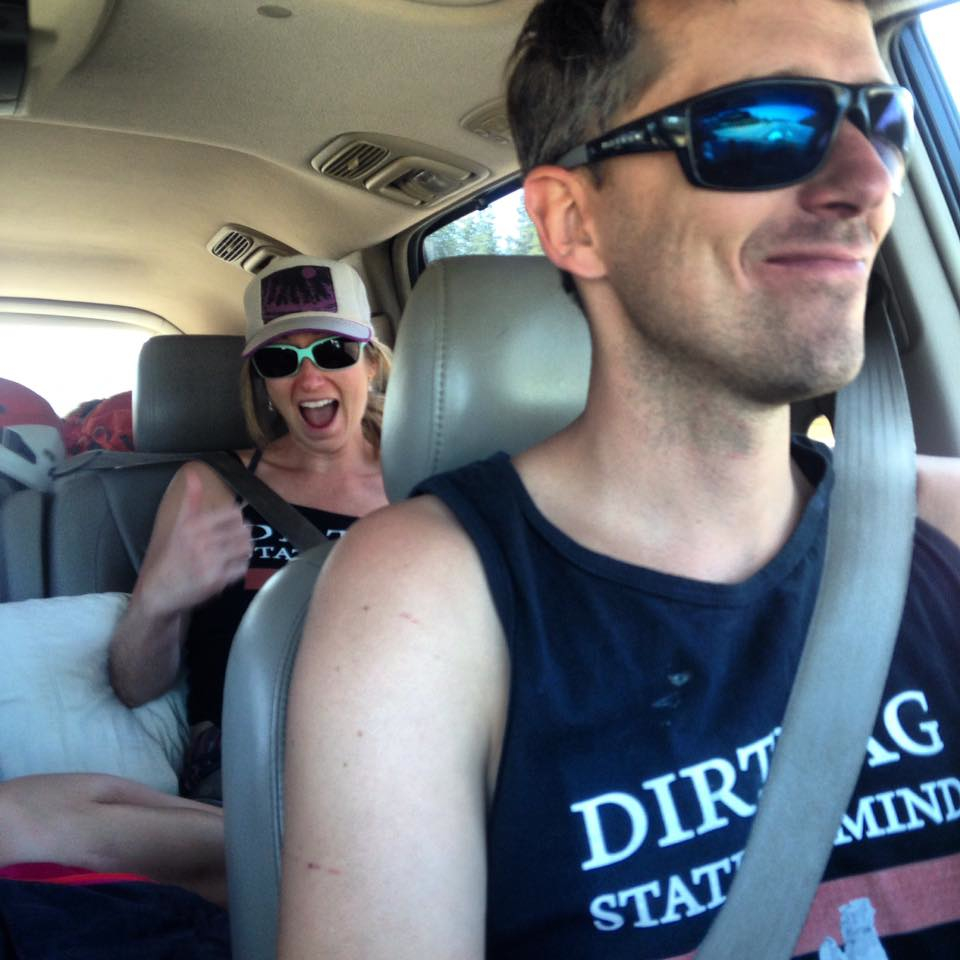 It was a sign of the times, a turning of the page, a shift in aesthetics for these two climbers. No, we weren’t off to the Himalaya or a new route on the edges of civilization – Dave and I were pushing the limits of our 15-year friendship by getting into a minivan together and heading west to Reno – with his wife.

by Luke Mehall, publisher of the Zine, and author of American Climber

Dave and I are like peanut butter and jelly; we go well together. His demeanor is calm and cool; I’m often hyper and passionate. We have the ability to not only survive a 2,000-foot wall together and still be friends, but also survive a long car ride. We don’t argue about who smells the worst, what kind of music to play or what fast food restaurant we’ll resort to when the times get tough (In-N-Out Burger).

Dave’s wife, Brittney, on the other hand, is like me: occupied with an internal restlessness. We were roommates for two years and had more than one heated argument, but I can’t remember what we fought about. We’re good buddies now. This was during the same time period these two fell in love. Dave would couch surf in between guiding gigs and would always surprise me with a newfound interest in five a.m. runs, crunch workouts and green smoothies. I just thought he wanted to be more fit, but what he wanted was Brittney.

All sorts of my college friends have these stories of how they got together, drawn out over many years of friendship, before finally falling in love. That’s the reason we’re in the minivan on our way to Reno: Brittney’s sister Amber is marrying our good friend Phil, and they asked me to be the officiant. It will be my second time this year doing something I never thought I’d do once. If you would have told me I’d be an ordained minister in the state of Nevada by the end of the year, I would have responded with speechlessness.

The minivan is from 2004 but it seems futuristic since the newest car I’ve ever owned is a 2000 Subaru Outback. There’s even a DVD player.

“So, like, we could be driving and watch ‘Seinfeld?’” I asked excitedly.

I immediately go into a fantasy of buying one so I can sit in there with a special ladyfriend and watch “Seinfeld” or “Dave Chappelle” on a cold night in Indian Creek. That sounds like heaven.

We start to get into a rhythm after the first In-N-Out Burger, and I realize I’m being used as a card in Dave’s dietary requirements. See, Dave is a voracious carnivore and Brittney is a vegetarian. He likes burgers, she likes kale. With myself, a carnivore as well, in the car, it’s 2 to 1, meat eaters victorious. We get double doubles while Brittney eats milkshakes and fries. And we also eat milkshakes and fries.

We examine America from the vantage point of a minivan. In interstate traffic we count way too many people texting and driving and question the sanity of five-lane highways. From the land of the Mormons, we cross into the land of sinners – neon lights with promises of … something. I’ve never been sure what.

Utah’s Mormon dominance and Nevada’s acceptance of sinners have always been an interesting intersection. Both make me a little nauseous and long for the mountains of Colorado. Somewhere on Highway 50, so-called the “loneliest road in America,” is the strangest and saddest part of the West.

In Nevada, we go into a grocery store and an employee asks me if I’m a Burner.

“Well, on the weekends,” I reply, and then I realize she’s talking about Burning Man. “No, we’re on our way to a wedding” I tell her and see a hint of disappointment in her eyes. Just a crew of boring people in a minivan.

Dave puts in a marathon shift of driving. He’s in the zone. I read David Sedaris and imagine, if he can make it, I can make it, too. I DJ up new music that Dave and Brittney have yet to hear: the new Beyoncé. Brittney decides she doesn’t like it. “What happened to the little, innocent, charming Bey? She’s all angry now. Could you imagine the guy who wrote ‘Big Pimpin’ cheated on her?” Dave bobs his head along with the new Chance the Rapper mixtape, and I try to catch him up on all the news that’s happened in the world of hip-hop since we took our last road trip two years ago.

Once in Reno, we collapse into the pre-wedding insanity of Amber and Phil’s apartment. Dave, ever the genius, suggests we kidnap Phil for a 1,000 foot “bachelor party” climb in the Sierras. Phil hasn’t climbed much in the last decade, but Dave still believes in his future brother-in-law.

The minivan becomes the manvan, and the three of us explode into its confines. Hard to believe a perfect alpine paradise exists a few hours from Reno, but it does. In-N-Out Burger stop No. 2 starts out this bachelor party climb of “The Hulk,” one of the biggest granite walls in the High Sierra. In addition to the climb, the day included but was not limited to: road sodas; an endorsement of the party from Alex Honnold, whom we ran into on the hike in; me basically crying because it was so cold; drinking from alpine streams; finding a Hulk-themed Pez dispenser in the summit register; getting lost; and finally, at 1 in the morning, In-N-Out Burger stop No. 3. Yes, I’ll have a milkshake, too. Please.

By the time In-N-Out Burger stop No. 4 happens, we’re homeward bound. We find ourselves contemplating covered-wagon travel, mostly because we stopped for some climbing on Donner Pass. It was here that the Donner Party spent their epic winter, which ultimately led to well … much worse than In-N-Out Burger.

By now, we are jonesing to be back in Colorado but try not to lament the next day and a half of driving. That would have been a lot of days in a covered wagon. We discover a hot springs near Wells, Nev., which also serves as a sleeping spot. In the morning, we have a quick soak for our weary bones and make the last push to Ridgway – with the grand finale of a Subaru solo adventure over Red Mountain, Molas and Coal Bank into the midnighthour, back home into the arms of a sleepy Durango.

We have also published three books: American Climber, The Great American Dirtbags and Climbing Out of Bed, both written by publisher, Luke Mehall.