A Geologist Falls in Love with Gravity by Drew Thayer 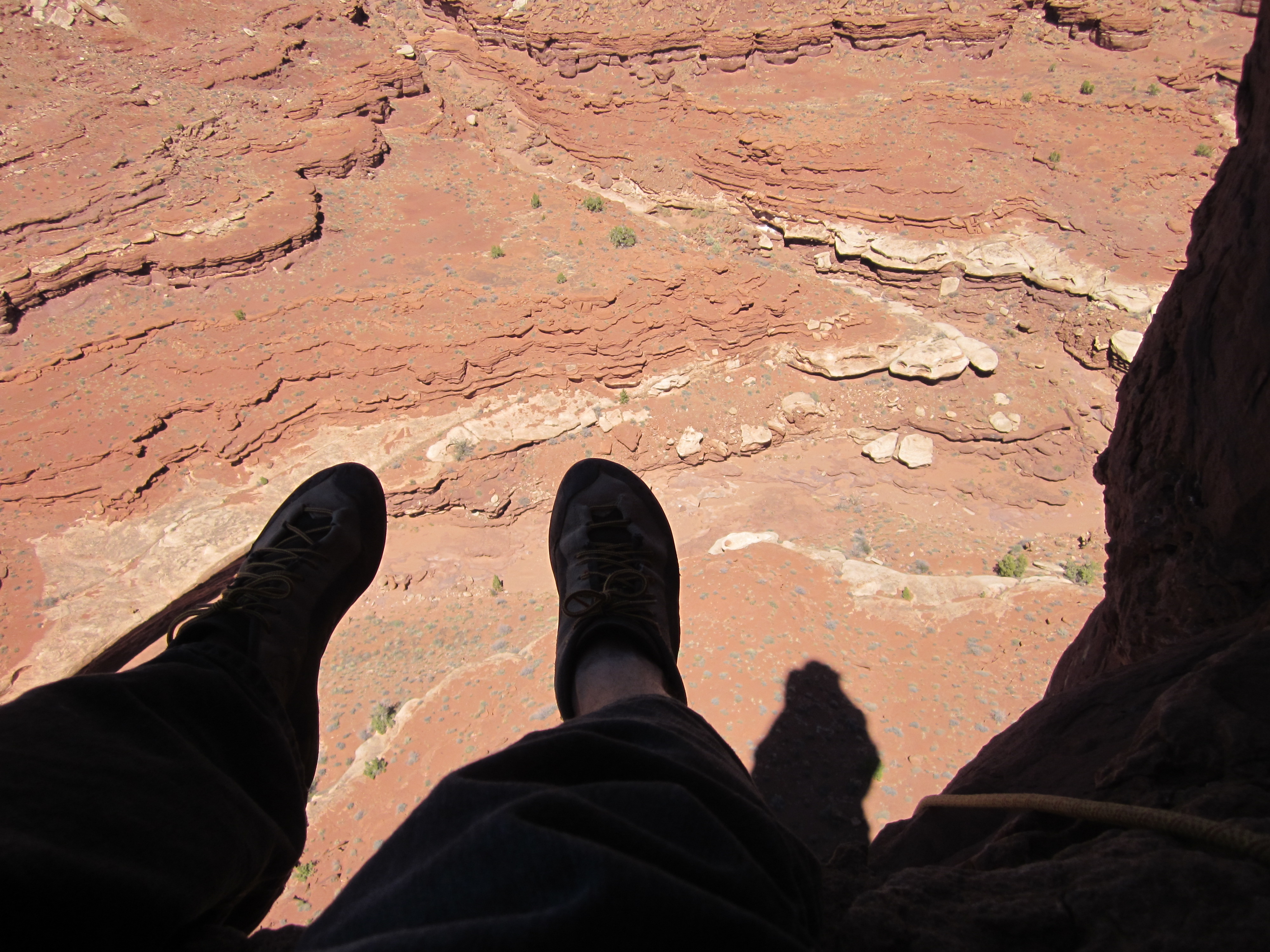 This sport we call climbing is built upon layers of paradox: Creation on the brink of destruction. Pleasure through pain. Finding life by risking it. These are beat to death as clichés, however if you pull off the trite exterior, every cliché is deeply true.

by Drew Thayer (note: this piece was originally published in Volume 7) 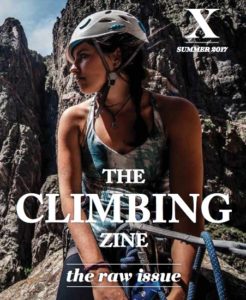 Volume 10 is now available. Get a copy or subscribe here.

As climbers, we depend upon erosion, the incessant geological transport of material from uphill to downhill, for everything we climb on. In the long run, even mighty mountains cannot resist the irresistible pull of gravity, so they slowly fall apart across the ages, shedding their bulk in bits and pieces…and revealing steep cliffs and crags. A world without erosion would be smooth, featureless—uninspiring. It is the topography, the contrast of that which remains and that which has been destroyed, which causes us to look up and ponder. Some will note the landscape and continue on, some will appreciate the beauty, and some of us will think, every time, I need to be up there.

Uniformitarianism: The theory that existing processes acting in the same manner and with the same intensity are sufficient to account for all changes across geologic time.

In Colorado Springs, a red rock ridge laced with burgundy whorls rises steeply like a frozen wave beneath the looming bulk of Pike’s Peak. On a fall afternoon you can climb the warm stone and recline in sunny, sheltered coves along the ridge as gale-force winds whip a con-trail of snow off the summit of the mountain, eight thousand feet higher. On the steep sandstone wall, a climber lunges powerfully and grabs a hueco, his fingers closing around small crimson pebbles studded in the edge of the hole.

These pebbles tell a story: the same color, same texture, same rock, in fact, as the towering mountain above, except these pebbles crumbled off a mountain that existed so far back in the geologic past that reptiles were just developing the amniotic egg—an adaptation that would allow the creation of their distant progeny, the dinosaurs. While northern Appalachia was filling with miasmic swamps which would provide the coal to feed America’s westward expansion 300 million years later, a mighty mountain range of pink granite reared high above the Colorado plains…and shed tiny red pebbles off its steep flanks. A few billion bits and pieces of these Ancestral Rockies collected on the flat land below and became what we call the Fountain Formation today, one of the few monuments to a vast range which was completely eroded to flat plains before new tectonic forces stirred in the Pacific and pushed against our continent, driving the pink granite up again and forming today’s Rocky Mountains.

This steep sandstone ridge is an epitaph to an impressive mountain range…a range that died here. A man also died here when his rope cut on a sharp edge, warns the old guidebook we thumb through at the base while scoping routes. Cycles within cycles, comings and goings. The forces of erosion—gravity and thermodynamics—act constantly on the earth, just as they act constantly on our bodies, aging us, wearing us down. We will all die. Every mountain will erode to flat plains. We select a route, rack up, and begin the climb, gripping small red pebbles with our fingers for purchase.

In defiance of entropy

It is curious that the strength of a rock determines how steep a cliff it can hold under the constant onslaught of erosive forces. The stronger the rock, the steeper the face…and the stronger a human must be to climb it. Shale, a weak rock, has surrendered quickly to entropy. In the mornings I would run the smooth trails on the black, sweeping swales west of Durango, dodging around junipers, barely conscious of the soft rock underfoot. Limestone is a strong rock with a chemical weakness; when it’s unearthed and exposed to the complex living surface of the planet, some material dissolves and flows away, leaving vacant pockets. Many of us learned to climb on bolted routes at these crags, pulling our way up the wall on pockets that appear almost magically to greet the hand and foot.

Rocks fracture as they age, according to their strength. Wind and snow have scoured deep fissures into the old granite at Vedauwoo, some so deep they can swallow a man whole and spit him out with his clothes and skin shred to tatters. Sandstone, granite, gneiss, schist… all these can be rendered to tottering choss-piles, but the strongest of them defy entropy long enough to shed only their weakest parts, leaving revealing steep, compact cliffs. The Windgate sandstone, Shawangunk conglomerate, Devil’s Tower phonolite, Yosemite granodiorite…these rocks display the steepest cliffs, the cleanest faces broken only by distinct cracks, and these are the hardest to climb.

We spend years honing skill and building strength to climb these faces; like the cliffs themselves, we defy entropy by shedding our weak parts—belly fat, hesitation, the fear of falling—to distill only the strong core. Of course, even the proudest cliffs will crumble to horizontal inevitability in a few million years, and we will in a mere seventy or eighty, but for some of us, we can’t help resisting that tug with everything we’ve got.

Transience [tran ze en(t)s]: Passing especially quickly into and out of existence.

Nursing a light hangover and a three-day stench, three lads clad in impractical costumes tie a rope to the frame of their car and rappel over the canyon rim into Monument Basin, a wild undercut beneath the White Rim that sprouts like some Dr. Seussian garden with improbable towers of questionably competent sandstone.

Nowhere is the fractal logic of erosion so evident than here: on this large plateau of horizontally layered stone, these slender towers are simply what’s left over after the gluttonous gorging of erosion. The boys hike to the base of their objective, Standing Rock, which was first climbed in 1962 by the prolific Layton Kor, who paraphrased the famous Mallory quote by saying, “We climbed it because it won’t always be there”.

Today’s explorers ponder Kor’s words as they behold the monolith: three pitches tall and as wide as a two-car garage, the tower seems to defy gravity. The scene of the whole thing toppling over inevitably plays in each imagination.

Regardless, they rack up, rock-paper-scissors for the first lead, and begin climbing, whimsical garments bright against the solidified mud. The route is hard, the gear questionable, and the exposure exquisite. They stand naked on the tiny summit, carve juicy slices from the melon they carried up and crack open cans of warm Tecate, toasting the peril on all sides and the wild expanse of sky.

Newton’s first law of motion: An object in motion stays in motion unless acted upon by an unbalanced force.

He stops his rig at twilight in the valley to take a leak and stares dumbly at the black silhouette of the Grand Teton against bright stars. Seven thousand vertical feet, and he only has two. He packs a light pack and crashes on a friendly couch that night, but he barely sleeps, the image of the unknown looming above the valley of his dreams.

Nine a.m. and he stops moving for the first time in four hours. Since leaving the trailhead by headlamp, the way forward has been clear and simple. Now, a decision must be made. In front of him the rock steepens and the holds get smaller; this rock will require thoughtful moves that will be difficult to reverse. He breathes deep, checks the time, scans the clouds: at this moment, all is good, and he commits to the fifth class terrain.

Newton’s first law: movement is its own perpetuator. With no rope, no belay, no gear, he moves up the stone in simple silence. The size of the mountain diminishes to single holds and moves, each surmounted in smooth transition to the next. At the crux, clouds swirl in below and fill the void with whirling vapor. Above, a band of black rock extends upward, appearing featureless at first glance. The clouds below could be ominous, the face above intimidating. Or beautiful below, and curious above. Being ropeless, he chooses the latter mindset, grips the texture of the dark stone, and decides to find out how to get to the top.

Drew Thayer is a based out of Denver, Colorado. He cannot contain his fascination for the physical and mental journeys we travel in the vertical world. He explores these pursuits through climbing and writing and remains committed to pursuing type-two fun on objectives that seem a little too big. He records musings and images of his ventures at www.carrotsandpb.blogspot.com.