Crowbars, anger, and new routes, from The Desert by Luke Mehall 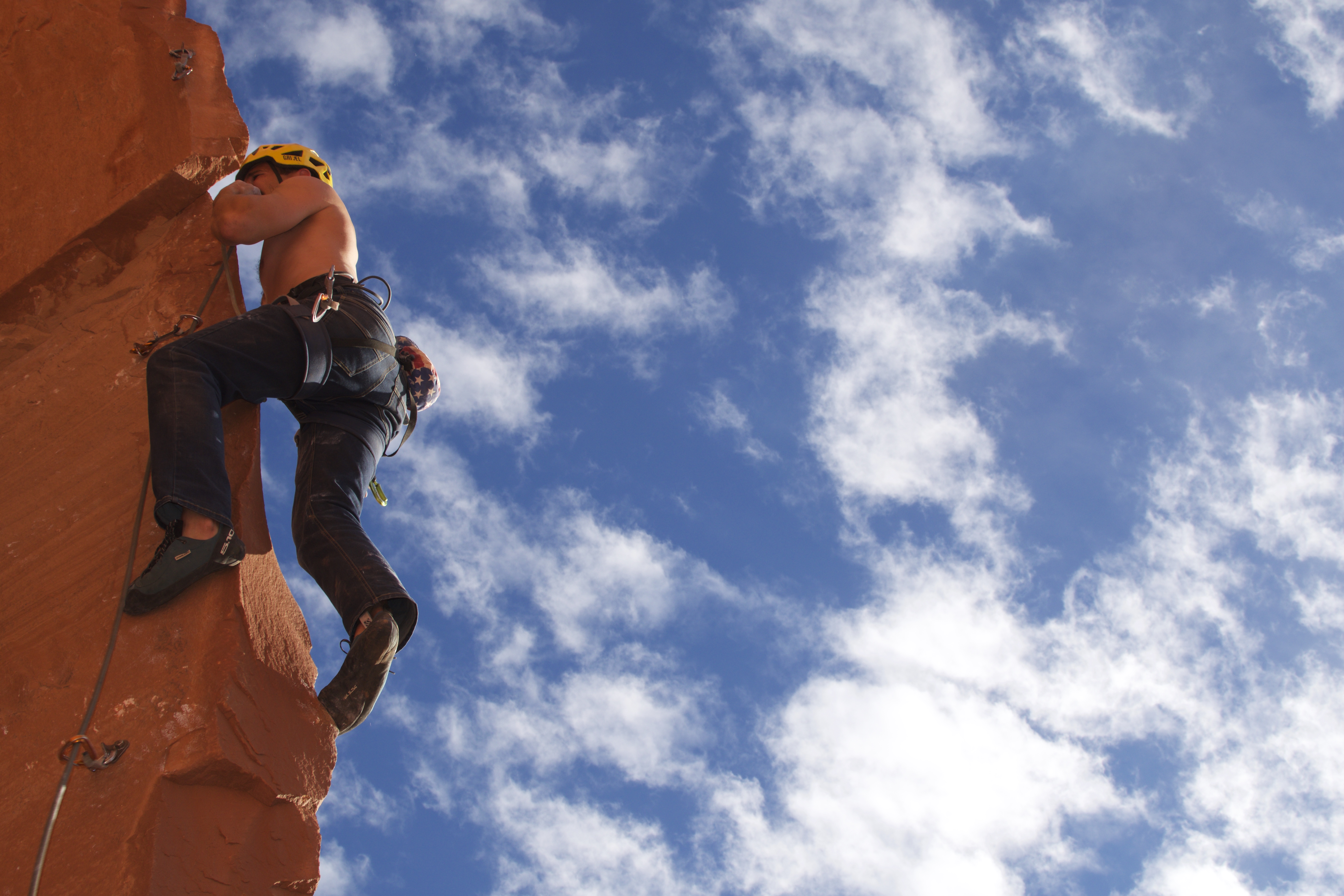 There was an energy to that crowbar in my hand. I was walking alone, down from a cliff, the mission was simple, and it was to retrieve that crowbar, a five-pound piece of metal. When I held it in my hand, I felt violent, and I wished I could use it for good.

This piece is an excerpt from The Desert, a dirtbag climbing book, by Luke Mehall.

New routing had turned me into a madman, a man obsessed. I was obsessed with newness, crisp edges, trundling, creative artistic license, cracks that have never seen the touch of a human hand, obsessed with the lines I’d seen that were unclimbed, and I made up my mind that I, or my close friends, had to be the ones to establish them. The crowbar was a useful tool for this endeavor: prying loose rocks off gently, or not so gently.

It wasn’t any sort of manifest destiny bullshit—that was actually what I was so angry about then, right at the beginning of the Trump era. Our mission was one of spirit, not extraction. It was just a feeling, a feeling like this was our time and we had to seize it.

These lines were all over the desert, the Colorado Plateau; the closest rock climbing in the United States would ever be to infinite. Of course it wasn’t; if we know anything about Mother Earth by now, we know she only has so much to give, and we are taking more than she has to offer. That’s the cool thing about unclimbed lines though—they are already there; we simply open them.

And the reality was, nobody seemed to care. We didn’t have any competition. No one else, armed with a drill, bolts, brushes, and a crowbar, was around where we were. Still, the first ascensionist knows a paranoia—that even though you discovered something, maybe someone else had as well. It all seemed too good to be true. But, it was, it was true, and it was real.

I reveled in each and every new route, and the smaller the team was, the less the roar of human beings were present, the more the moment seemed to be at hand. And the closer the moment at hand seems in climbing, the more complete and whole it is, as if you’re closer to God. It’s funny that we have to teach ourselves to be in the moment in this modern world. I just think most of the world is oh so boring most of the time. The sharp end of a rope was where I felt the most in the moment.

I hiked to one new wall we’d been establishing to get the crowbar and planned to hike it up to another later that morning for use on another climb I was working on. I needed some time alone too; I had anger flowing through my veins. Trump had just been elected president. The pendulum of American politics had swung back, off the rails, back into open white supremacy, open misogyny, simple-minded, ignorant thinking—with just a little help from the Russian government to close the deal. The devil won the election, with fewer votes than his opponent. Classic devil.

That five-pound crowbar swung back and forth, and I hiked down. As the desert does, I sank into the recesses of my imagination. I imagined coming across some white trash piece of shit wearing one of those red MAGA hats. A showdown would happen.

The crowbar would be my weapon—as if a crowbar would be worth shit in a cowboy showdown here in the desert. As if any sort of showdown would happen in this desert at this time—it was 2016, not 1916. As if the poor white trash was my real enemy—he was not—white trash is a byproduct of American capitalism, I’d tell myself, in my conversation with myself. Get a gun if you really want to be a Wild West cowboy. Why don’t you get your shit together, man? I thought you were a peace-loving hippie.

I was approaching camp now. The crowbar swung slowly, back and forth, back and forth, in my calloused hands. I was expecting camp to be empty by now, desperate for another hour of solitude before I rejoined the crew at the wall. It wasn’t, and I locked eyes with a tall blond man. It was Quinn, my friend, not exactly a close friend, but a friend, a member of the climbing crew.

“Good…good, man,” I mumbled, not yet fully out of my trance of anger and solitude.

A quiet settled over us. A tumbleweed may have slowly passed by in the light wind.

Ten minutes went by as Quinn set up camp, and I fumbled through my climbing gear and got ready for another hike. Then Quinn came over. “Hey man, is it cool that I’m here? I mean, I know this is your new area…”

I felt a little awkward and ashamed that I didn’t make him feel welcome. No climbing area ever belongs to one person, at least not the in American West; it’s all public land. After all, this is where we go to get away from it all, for me at least. This was our own personal paradise. With some friends, some food and water, and some climbing gear, I had everything I needed here, and I wanted my friends to feel that way too.

I thought more about this than what I actually said. Soon there was enough silence piled up that I had to utter something, so I just said, “Fuck it, dude; let’s go climbing.”

And I don’t know if I even said that. But I know we did say fuck it, and we went climbing.

GET YOUR COPY OF THE DESERT BY LUKE MEHALL HERE!