Castles Made of Sand 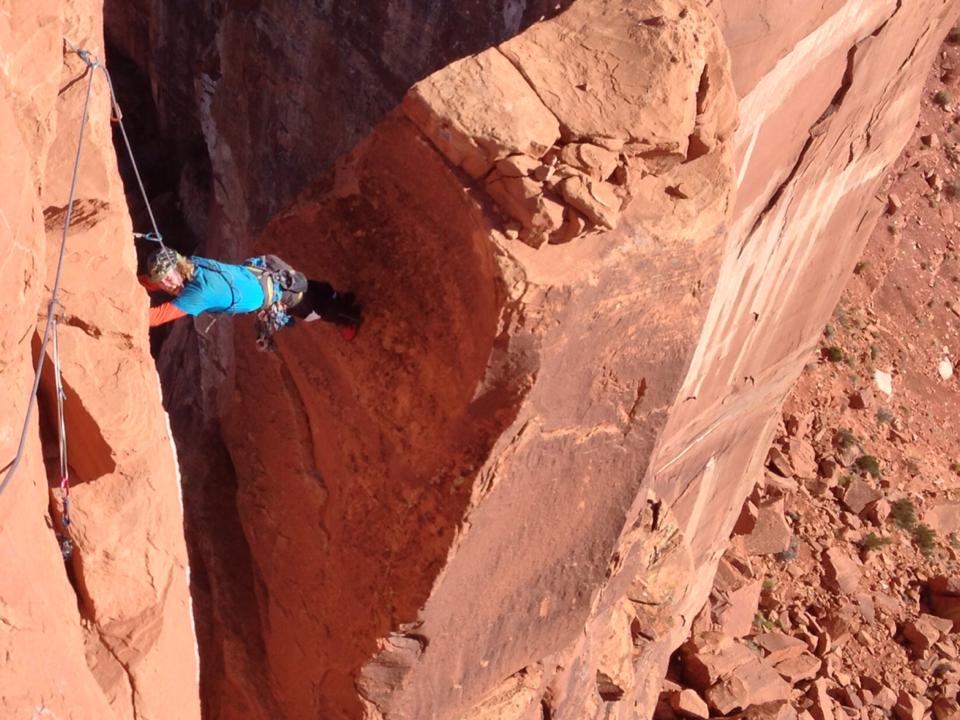 As climbers we all have that place, that favorite place where we’ve pushed ourselves to the limit and back, the place we could imagine our ashes scattered once our precious, short time is done here. For me, Castle Valley, is that place.

by Luke Mehall, publisher of The Climbing Zine (originally published in the Utah Adventure Journal)

Banner photo: Todd Glew doing the infamous step across move on The Priest

It is also a rabbit hole to gauge my climbing potential; there’s always a new benchmark, something a little more difficult to work towards, that never-ending ceiling pushing one to try, try just a little bit more.

In the beginning it was those dreaded chimneys on Castleton Tower. Castleton is an obvious beacon, a symmetrical four hundred foot tower, climbed by hundreds of suitors each year. Just because it’s climbed so often, does not make it easy. 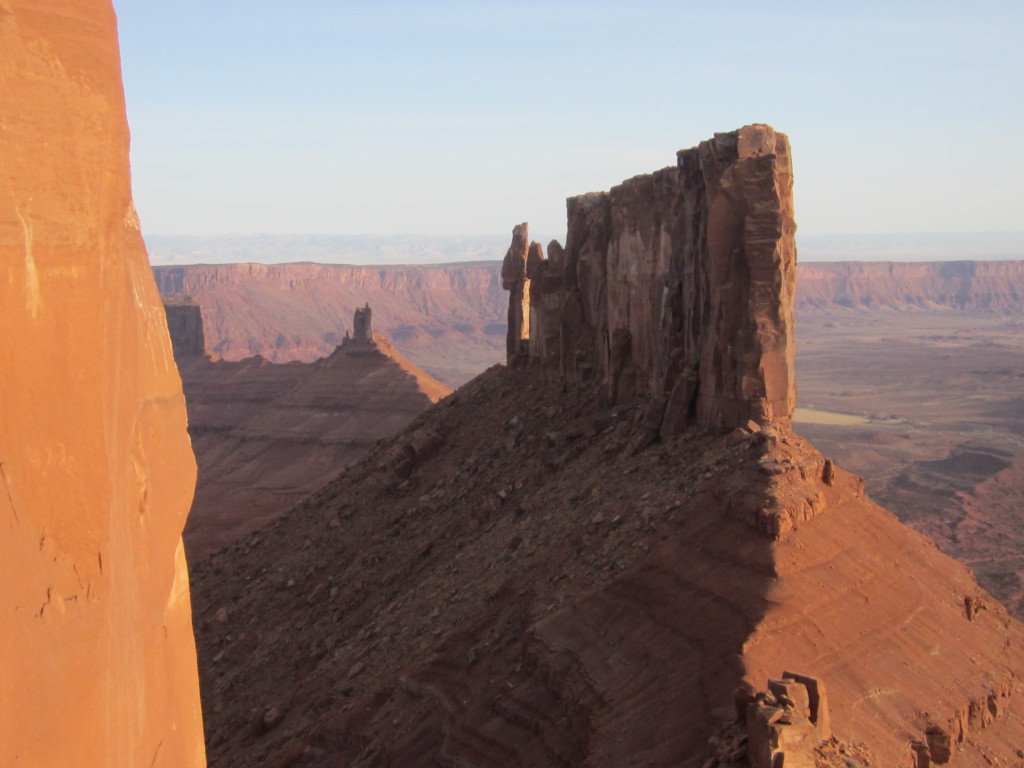 The Rectory with The Priest and Sister Superior in the background.

Early on, before the days of the jabbering drunken monkey full of beta that is Mountain Project, people would just look at things and want to climb them. The North Chimney on Castleton was one of those things. How hard can 5.8+ be, we thought to ourselves? It wouldn’t be a bad idea to climb a route with the word north in it in late November would it? Yes, yes it would be.

But, the best climbing experiences often come out of bad ideas. So we climbed the North Chimney on Thanksgiving day. Our hands froze in the initial beautiful hand crack, and by the time I was at the belay I had that unique feeling of numbness and pain known as the screaming barfies. I called for retreat, and my friend Shaun replied with, “We’re in it to win it.” His debating skills were more powerful than mine and he won, we kept going.

The crux “5.8” chimney took me an eternity as I clipped the quarter-inch bolt and fed my body to the wide crack, hoping I wouldn’t slip and fall on my partners as they patiently watched me struggle. To this day, it’s debated if anyone has ever truly fallen out of one of these off-width/chimneys on Castleton. The fear of failure is the greatest fear.

It took us that entire day to climb the North Chimney, and we hiked down by headlamp, stumbling and laughing and eating nothing but bars for our Thanksgiving dinner. 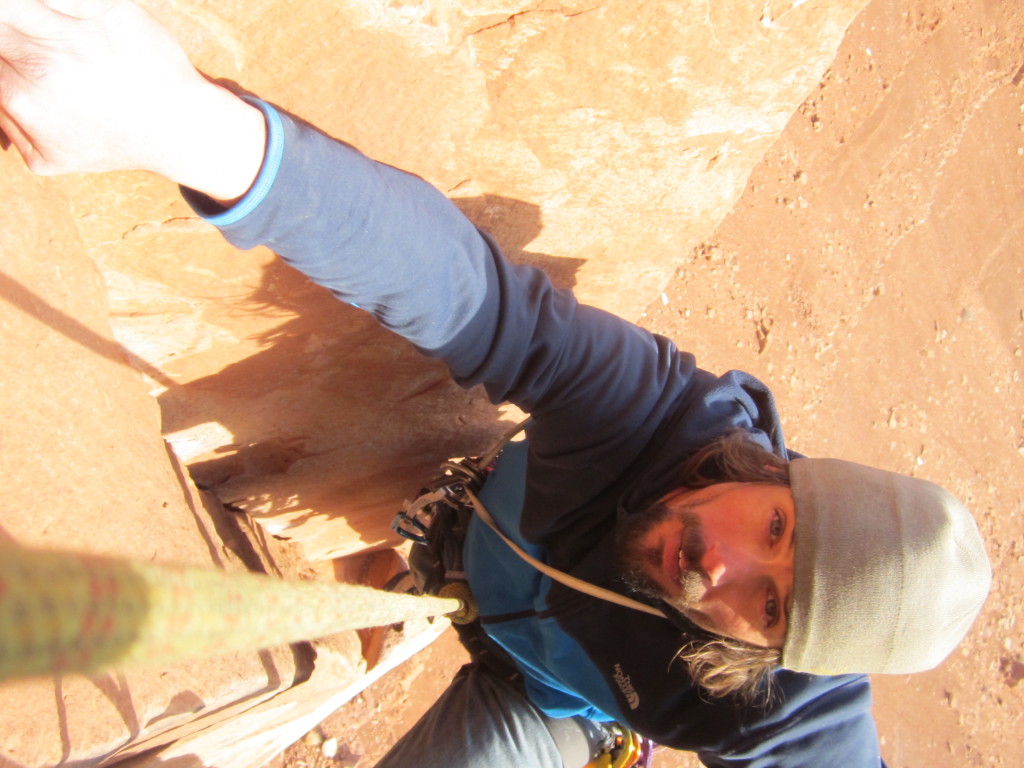 Years later, after attending a memorial service for a Salt Lake friend that died way too soon, but lived richer than most, my climbing partner and I decided to do a quick lap up the North Chimney in his honor. He had to work later that day in Telluride, so time was of the essence. We woke up before the sun, and hiked up the talus cone up to Castleton. To our surprise the North Chimney actually gets morning sun, and those initial rays felt heavenly. We raced up the climb in just a couple hours, shouted to the sky for our not-forgotten friend and felt that peace and aliveness the desert has to offer. We descended as most people were headed up and wished them well. Dave was on time for work in Telluride.

In climbing its good to not be satisfied, I needed a new challenge in Castle Valley. The classics went down as they do there; struggle leading to success, and a hell of a summit. (But why do we always forget the beer? Those guys in Eiger Sanction never forgot the beer!) Fine Jade on The Rectory, Jah Man on Sister Superior, the incredible Jay Smith route called Holier Than Thou on The Nun; all these climbs are in my memory bank as honest days of toil for a proper high atop a summit in my favorite place in the world.

Then there was Honeymoon Chimney on The Priest. It’s the perfect 5.11 test piece chimney of Castle Valley. Like a rite of passage if you want to take it further than the trade routes of Castleton Tower. The kind of climb you do, and then you thank the desert pioneers like Harvey Carter and Layton Kor in your soul, and think “I’m not worthy, I’m not worthy…”

Though I’d honed my desert skills for ten years, and even managed to send a couple Indian Creek off-widths like Big Baby and Big Guy, the first pitch of Honeymoon Chimney scared me like a vacuum frightens a cat. Problem was I was too far along to call for retreat. What made it worse was my climbing partner Todd was smoking cigarettes and yelling at me, “Just lay it back.”

I cursed equally at my fear and at Todd and thought I’m getting too old for this, as I moved in the slowest form of movement known to man: off-width climbing. When I finished the chimney I yelled off-belay as you always do, and then I looked down at my knot, and it had a giant core shot in it. I’d wiggled myself up and down in that chimney so much it wore through the knot!

As the day was slipping away from us I called for retreat and so we did. Our ropes got stuck when we tried to pull them and the Climbing God’s forced us to climb that chimney again. Despite Todd’s utter conviction that he could “Just lay it back” he had me lead it again. It was easier the second time, and that day we stood on summit together and poured over the full summit register and took in the view you always have to earn, with Castleton proudly standing the background, shooting right up in the air as it always does.

With last year’s release of the “High On Moab” guidebook, written by Karl Kelley a whole new world of route information opened up, further increasing the rabbit hole. The challenges in Castle Valley will run out before my time on this earth does. Someday, if I’m lucky enough to be old and gray and 70 and still climbing I bet that North Chimney is going to feel as hard, or harder as it did in those beginning days. For now, the route Ascended Yoga Masters on Parriott Mesa looks like it could be the next logical step in off-width suffering. How hard could it be?