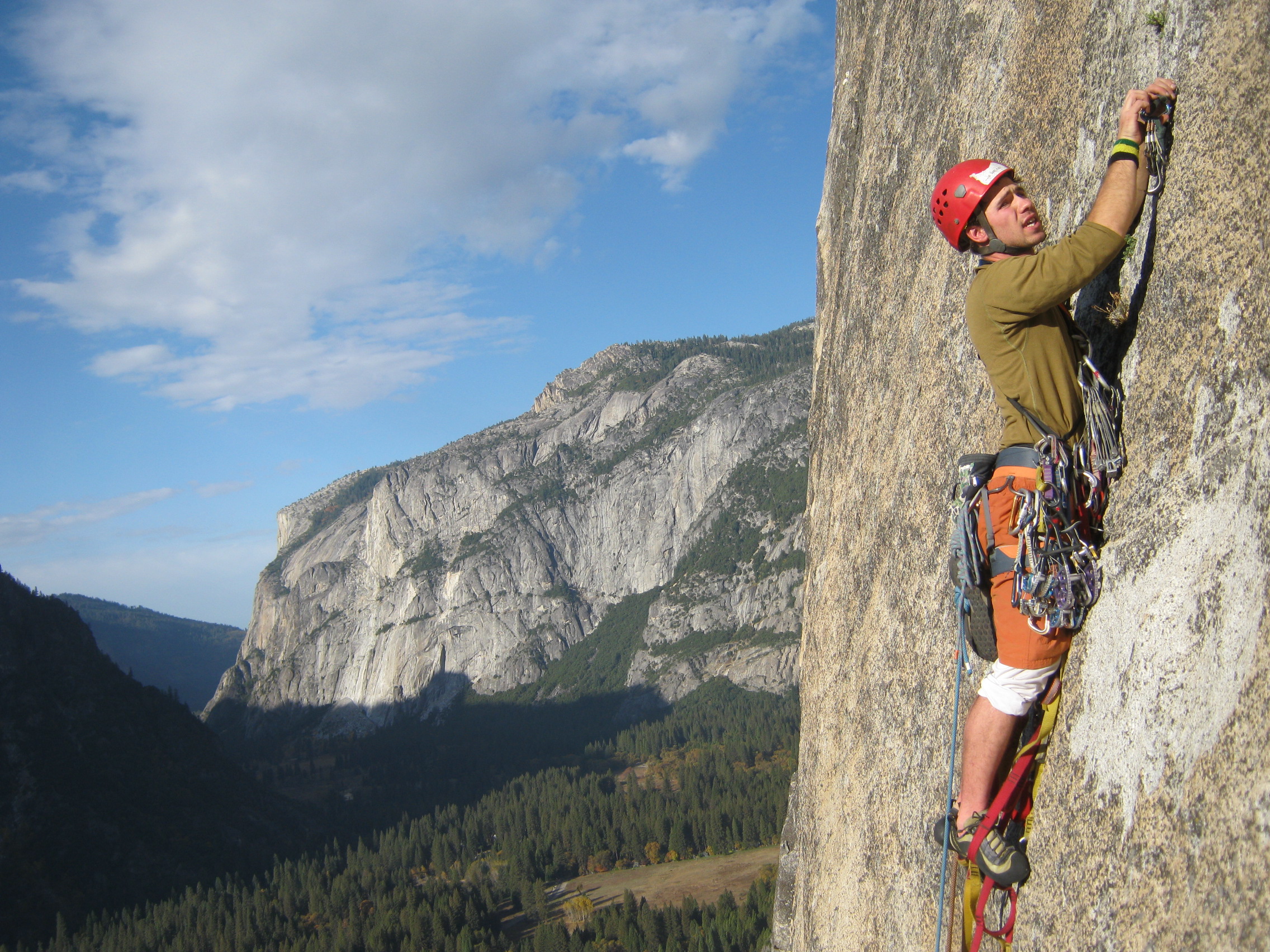 My one-year-old and I are in Rocklands, South Africa, when I let a stinky one slip inside a bouldering cave, causing all the other climbers to turn and stare at me in disgust. I point to my unattended toddler, who has been screaming and running underneath them for the past hour, endangering everyone and causing a scene. “What?!” comes out of my mouth as I raise my shoulders in defiance. I’d rather be climbing without him on these classic highballs, feeling the rush of danger under my feet, answering to just my needs. It ain’t easy being a climbing parent—I wish I weren’t here too.

A Grigri hitting my crotch startles me from my slumber. I was dreaming, napping in the boulder fields between reps, and now my toddler has smacked me in the junk with my belay device. He was well attended by our climbing group of friends, allowing me the opportunity to snag a snooze, but perhaps I deserved it. Cosmic karma for dreaming of being a bad climbing daddy?

Let’s be clear, according to some people, if you climb, you are neglecting your kids. Or, if you die climbing, you are certainly a negligent parent, and the anonymous trolls on the internet are sure to tell your loved ones so. Let’s file that under jerks that don’t understand alternative lifestyles and weren’t cuddled enough as children.

For those with a grip on reality, parenting is a balancing act between being yourself and worrying about your kid(s) 24/7. Sometimes it goes well, and sometimes a poop falls out of your kid’s pants onto the floor at a rest stop while you’re waiting in line to use the restroom (true story) on your way to a climbing weekend. That was awkward.

Sometimes it looks like it’s going great, and then all heck breaks loose. Just last week I was climbing at our local crag with a fellow parent, Lindsey, and her little girl. As we climbed, our kids were playing at the base. I was putting up a new route and looked down only to see both kids without pants on (but still wearing helmets), and one was defecating in front of the other. By the time I came down, my kid, now two, had stepped in it (note, I’m not kidding—this is actually the second time this has happened). We put up a variation next to it after that with my fellow climbing parent leading the business.

As she began to crux out, her three-year-old little girl laid down on a rock and demanded in a stern voice that my son give her a massage…where do they learn this stuff? We named the routes “No pants, no problem” and “Toddler massage,” as it seemed only fitting. Fortunately, we were able to recover in time to ensure it truly was “no problem” and no “toddler massage” occurred, but, geez, that was a close one. 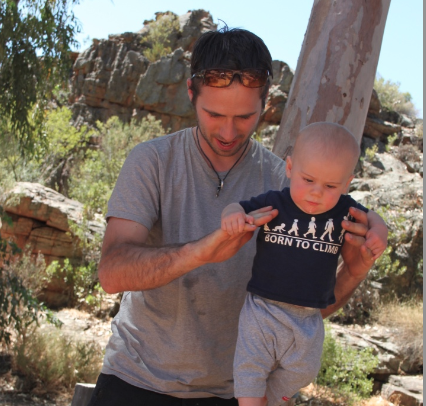 And then, of course, it can feel like it is going terribly and then turns around. I think back to a recent trip to Indian Creek where it was just my son and me. It was our first long trip together without Mom, and we set out late in the evening, determined to prove that dads can take care of two-year-olds just as well as moms. My hope was he would fall asleep in the car on the way out to the desert. I was wrong, very wrong.

He’s in his car seat in the back as we drive through a mountain pass halfway between two towns. No cell coverage, icy roads, pitch dark and I start hearing loud gurgling noises coming from the back. What the hell is that? I think as I turn on the dome light and look in my mirror. He has what appears to be blood all over his mouth and down his shirt. He’s puking blood! We are in the middle of nowhere, and I’m going to watch this kid die are my first thoughts.

Ok, assess the situation: could be a pulmonary edema from high altitude causing vomiting of blood, or he ate nuts, and is somehow puking blood from an allergic reaction. (Note: he’s allergic to nuts because the world is unfair). No, that doesn’t make sense; he would be in anaphylactic shock and just suffocate. Stop the car! Perform the ABCs, and take control of this situation.

There is a snowplow in front of us. I know it is at least thirty minutes to a hospital whatever direction I drive, but that plow probably has a radio. It pulls over to let us pass, and I aggressively pull in front of it causing it to slam on its brakes. I bet the driver is pissed; I don’t care. I open the door as fast as possible and jump into the cold mountain air. I fling the little one’s door open and put my hands on his face to open his mouth to check for an Airway, Breathing, and eventually blood Circulation (ABCs). It smells terrible, like rotting vegetables and stomach acid. I ponder, What the heck are those chunks of red all over the place?

Then it hits me, every muscle in my body relaxes, and I start to cry tears of joy. Beets. He ate beets prior to the drive, and all that red stuff is half-digested root vegetables coming up from the twisting mountain-pass roads. We drive to a friend’s house halfway to The Creek as the kid mutters over and over again, “Beets…akkie.”

My god, I’m the worst father ever, I think to myself. We approach our friend’s door at 10:00 p.m. with little one covered in nastiness. “Hey, buddy, good to see you. Ummm…do you mind if I put this little guy in your bathtub?” Good friends are the best.

We spend the night, and the next morning I have serious doubts about the realistic nature of this climbing trip. I can’t call his mom; she will call it all off for sure, but maybe that’s best. This decision is eating into me, negligence or prudence? I decide we will go to breakfast at a restaurant, and if he makes it through the meal in good spirits, we will go to the next town, jumping from human establishment to human establishment as checkpoints in determining if we can enjoy desert bliss or not. He seems very happy, keeping down his food and even climbing on the railings at the breakfast joint. This all despite the car reeking and his constant muttering, “Beets…akkie.”

I guess we won’t be eating any more of those, and the car and the car seat will need a wash when we get home. But that doesn’t deter us as we drive in the afternoon sun, passing each test at the various towns and arriving in Indian Creek.

The first night is cold…very cold. As we turn on the car to warm up at 3:00 a.m., I realize we are pushing it a bit, but snuggled in the same sleeping bag, he seems content. Together we camp and climb splitters with a group of folks whom we have just met for the first time. I don’t force my son to climb and instead allow him to get on rocks only if he wants. He is, as usual, desperate to go bouldering on every little rock he can. I spot him, never allowing him to get into threatening situations. When he has the inevitable meltdown, I place him in a baby carrier, and he falls asleep on my chest to the rhythm of my heartbeat. 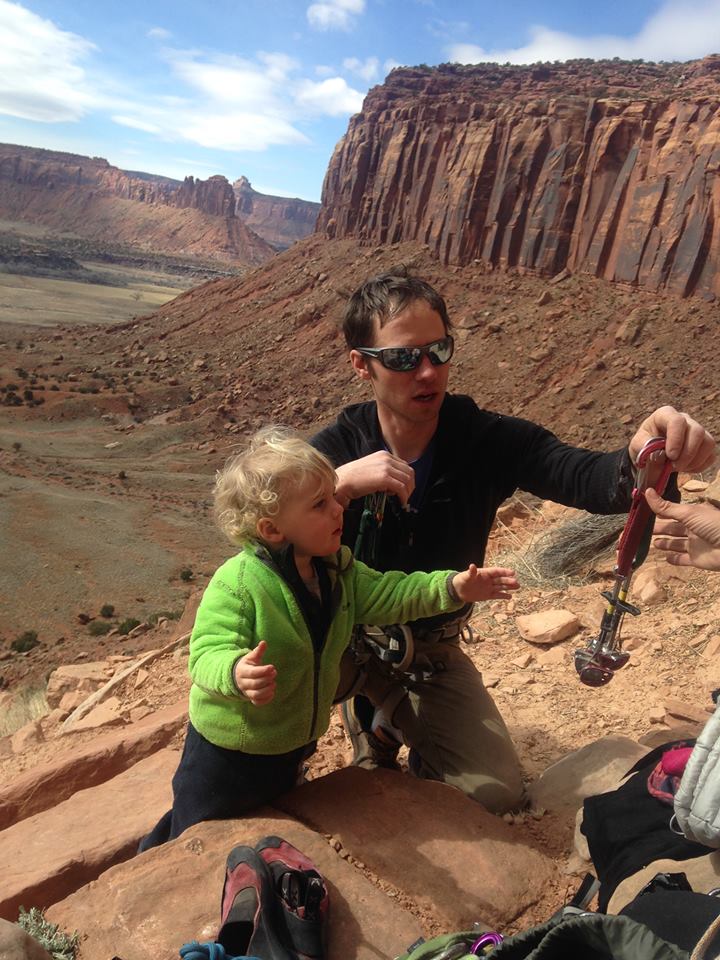 And mostly to his credit, the little one does great. He insists on helping carry firewood and pretends to pour everyone coffee in the mornings. Our new friends agree he is a real charmer, and they graciously help watch him at the crags as we rotate leads. Every day, our backpack is filled with a rack, harness, shoes, chalk bag, helmets (got to have a helmet for the kiddo), toys, extra kid snacks and water, sunscreen, and extra clothes (to build a nest for nap time and in case of a potty blowout). Half kid stuff and half climbing gear, the pack is a massive tower of pain. Thank goodness our new friends help carry our rope and some cams. It takes a village, or at least a tribe of dirtbag climbers. In the end, it all turned around amazingly. From imminent death to climbing bliss. It was a great bonding moment with my son. And we both got enough climbing done to feel satiated.

And while that trip was well beyond expectations, I have to admit, like many other parents I know, sometimes I dream of being a bad climbing daddy. Dreams of climbing in Patagonia for months. Dreams of getting back on a big wall for a week. Dreams of climbing with his mom again for months on end in the Italian Alps. Dreams of soloing alpine granite high in the Sierra. Dreams of forcing my kid to train every day and love climbing so he can put the rope up for me someday. Dreams of having the freedom again to climb what I want, when I want.

However, again, like many parents, I dream of these things and then have one of those heart-melting moments. It happened today, bouldering at our local crag. “Up, up, up!” my little boy yelled in excitement as he looked at the wall of rock in front of us.

I put my dreams of uninterrupted sending for the day to the side so my munchkin could climb instead. I wouldn’t be doing the circuit I had planned out last night after all. “First World problems,” I say out loud. And anyways, that kid’s smile, enthusiasm, and cute hair have me spellbound. I would do whatever he said, and he said he wants to go up, up, up the rocks. Yeah, I can spot him and encourage him. As he smears and struggles his way up the tiny rock, I think, Life is pretty damn good. I wouldn’t want to be anywhere else.

Scott Borden, PhD, is a lecturer in the Environment and Sustainability Department and the Master’s in Environmental Management Programs at Western State Colorado University. He is the author of Squeak Goes Climbing in Yosemite National Park, a children’s book about all things climbing. Purchase a copy for a child you love HERE.