The Ask: How to Get Permission to Climb by D Scott Borden 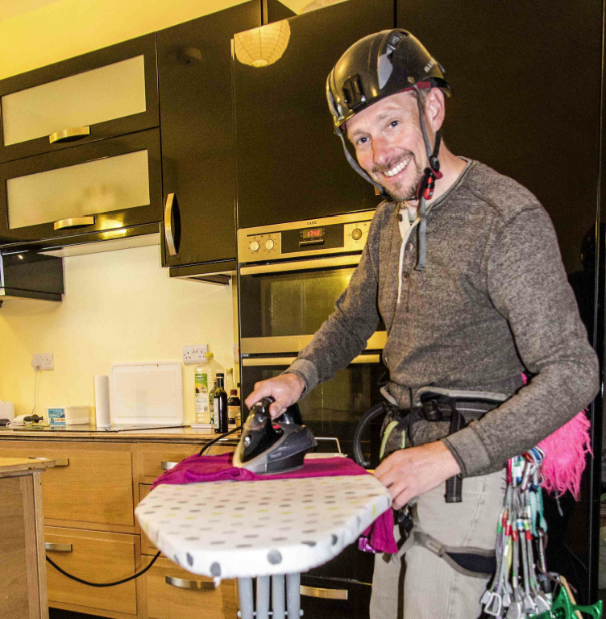 “Ummm…honey, you know that nice hiking weekend we have coming up together? Well, ahhh…Dale just asked me if I…ummm…could climb tomorrow, and I’ll be back before we leave. Sooo…would that be ok?” Sweating after an awkwardly tense eternity of silence—but in reality it was only a few seconds—you blurt out in pure, unadulterated desperation, “But I went to dinner with your parents last weekend!”

Banner photo Pete Gallaghan doing the chores so he can get out to a successful benightment.

Damn, that could have gone better.

Have you been there before? “The ask”?

You know, when you desperately need permission from your partner, guardian, boss, or what have you to free yourself from the shackles of everyday life and tie into the sharp end. And now for full disclosure: I don’t personally have this problem.

No, I’m not bragging, but my partner is an incredibly caring person who knew when we married that climbing as a religion was part of the deal. However, I, like most of us, have seen this scenario play out over and over again with climbing partners. We have all heard, “Sorry, I can’t go because of XYZ.”

With the advancement of gear, beta, access, and training, the new-school climber no longer needs to sleep in a van to climb all the time. As a result, the new-school climber commonly juggles many responsibilities, and these responsibilities make understanding “the ask” more important than ever. While studying the use of persuasion to promote social causes for my PhD, I was constantly involved in conversations on this topic, and I can think of no better “social cause” than getting people exercising in the great outdoors and communing with rocks. So following are some time-tested theories and proven, helpful tips from veterans that have been in the trenches of the clash between the new-school climber and modern society.

Since every situation is different, I claim no silver bullet, exact receipt, or formula to get what you want. Trial and error of different strategies is probably best, as every person is persuaded by different things. But take Stefan’s story, a seventy-year-old retired doctor with grandchildren trying to persuade his wife with a nasty online shopping habit that he should climb every day. Stefan finds exchanging things or services works best for his situation. No, I don’t mean to make this sound like a business transaction, but there are things we can learn from our friendly local capitalists.

I can’t tell you how many times when collecting stories for this article I heard people say, “I have to have my chores done, or else I can’t go.” Or, “I bought them something nice, and they said yes.” Someone even said, “I need to make love to him the night before or there’s no chance.”

Anyways, the bottom line is that if you don’t pay your bills, get your family duties done, or take care of the basics, it’s going to be that much harder to convince this person that dancing on rocks is the most important thing to do. During “the ask,” it is always wise to deliver the question after positive news. Persuasion experts call this priming. Once someone says “yes,” they are more likely to say “yes” again. Stefan might try, “So the cooking class I enrolled us all in next weekend is paid for and on the calendar. You’re still excited about our family getaway, right?”—yes—“Oh good, and by the way, I’m headed out to climb that 5.15X later today, so don’t expect me home for dinner. Toodles!”

For Chip, setting expectations early and often has proven vital. As a middle-aged climber with nine children (that is not hyperbole), he understandably needs to heavily structure his time. When couples are both climbers, it makes things a lot easier because they both understand the innate, burning need to literally drop everything else in their lives and just sink their hands into some chalk.

However, a lot of us are not as fortunate. If the asker was a climber prior to the relationship, it can help as the expectation of going climbing has been baked into the relationship. This expectation that climbing is part of the deal is also true for “the ask.” Setting the expectation that you will be climbing X amount of times per week or month is important to avoiding constant conflicts. If at all possible, setting certain days and times will ensure that you get what you want. Chip also recommends to always overestimate the amount of time needed, as future karma will be in jeopardy if you constantly come home late.

Chip might say, “Honey, I’m headed out for my usual Wednesday session and won’t be back until 2:00 a.m., as we plan to be almost benighted but barely climb our way out with the help of our headlamps on wet limestone over the raging sea”—in reality probably at the pub all night spraying about the one hard climb we did—“don’t be concerned unless I’m not in bed when you wake up. Kisses!”

Then there is Paul, who uses the idea of power in numbers. I’m not a fan of climbing clubs, but they have their uses (as long as they don’t kill you!). They can be a cover for setting the expectation (like Chip) of certain days, times, and frequencies of climbing. If a climbing club is not available in your area, you can always refer to how so-and-so is heading out of town tomorrow, and you won’t be able to see them for a while, so they have invited you to climb one last time for good-old jolly sake. This does two things. First, it deflects the blame onto someone else for inviting you—it is clearly their fault, those evil bastards! And secondly, it shows that it is normal to go climbing as frequently as you do. Why else would Tina, with her thirty kids, five jobs, and mortgage, also be able to climb at 2:00 p.m. on a Wednesday? Because it is what sane people with normal lives do (this is, of course, probably not true). Paul might say, “Dale and Chip want to go climbing tomorrow. I know, last minute as usual. Those two are so unorganized, but what can you do? Anyways, I’ll just be gone for the day; love you, mean it!”

And of course, you could also just follow the lead of Todd. His strategy is nothing lost, nothing gained. Todd was once afraid to ask permission for anything, and he was not alone. In fact, Jason Comely, a freelance IT guy from Cambridge, Ontario, has started a very popular game out of this idea called Rejection Therapy. The game “dares” players to ask for obscure things from strangers to purposefully get rejected every day. Thus, in some warped and perverse way, this game eventually frees them from their fear of rejection.

Clearly, only sad, pathetic people play this game. (Note, both Todd and I play regularly.) The point is that, if Todd doesn’t make “the ask,” there is no chance he is getting permission. And Todd has one other trick up his sleeve: the game has built up his confidence, and confidence is key. It has been shown to influence people over and over again. Specifically, avoid stuttering, speak clearly by practicing prior to playing, if needed, have good body posture and eye contact, and believe you are going to get a “yes.” Todd now asks permission every time he wants to go climbing, and he does it with a straight spine, shoulders back, in a strong yet soft voice, and with constant eye contact.

Finally, here at The Climbing Zine, we would like to add one more piece of advice: ask for forgiveness, not permission. If all else fails, just go. Now, we’re not recommending lying, as eventually it will catch up to you. We are, however, saying that, if going climbing once in a while stops you from losing your mind and you know 100 percent that you can’t get permission, you may want to just go and deal with the consequences later. For example, slip those shoes and chalk bag into your backpack when no one is looking and skip lunch at work for a “sneaky” session. There are much worse things to be addicted to. Of course, that is how every alcoholic and/or drug addict starts a defense of their actions, but here it’s true. It must be true, because…ummm…well…climbing is better for you than heroin!

Anyways, the point is, if climbing for a few hours is going to make you nicer to your children, better at work, pass a test, or give you the patience to volunteer at the elderly community, then just go. The world needs happy people. Better to deal with the consequences when in a good mood than deal with real life in a bad mood in our opinion.

If all else fails, just blame this article. “But, honey, the bad people at The Climbing Zine told me to. That publication promotes all kinds of bad things. And I forgot to tell you, I’m prolonging my subscription for another year.”

From all of us here at The Climbing Zine, happy asking!

Scott Borden is a PhD graduate at the University of Exeter’s Business School in Applying Marketing to promote social causes. He can be found pursuing or thinking about rocks anywhere he happens to be at any given moment. Despite his sarcasm, he is happily married and is a proud father.

This piece is an excerpt from Volume 9, The New School issue.