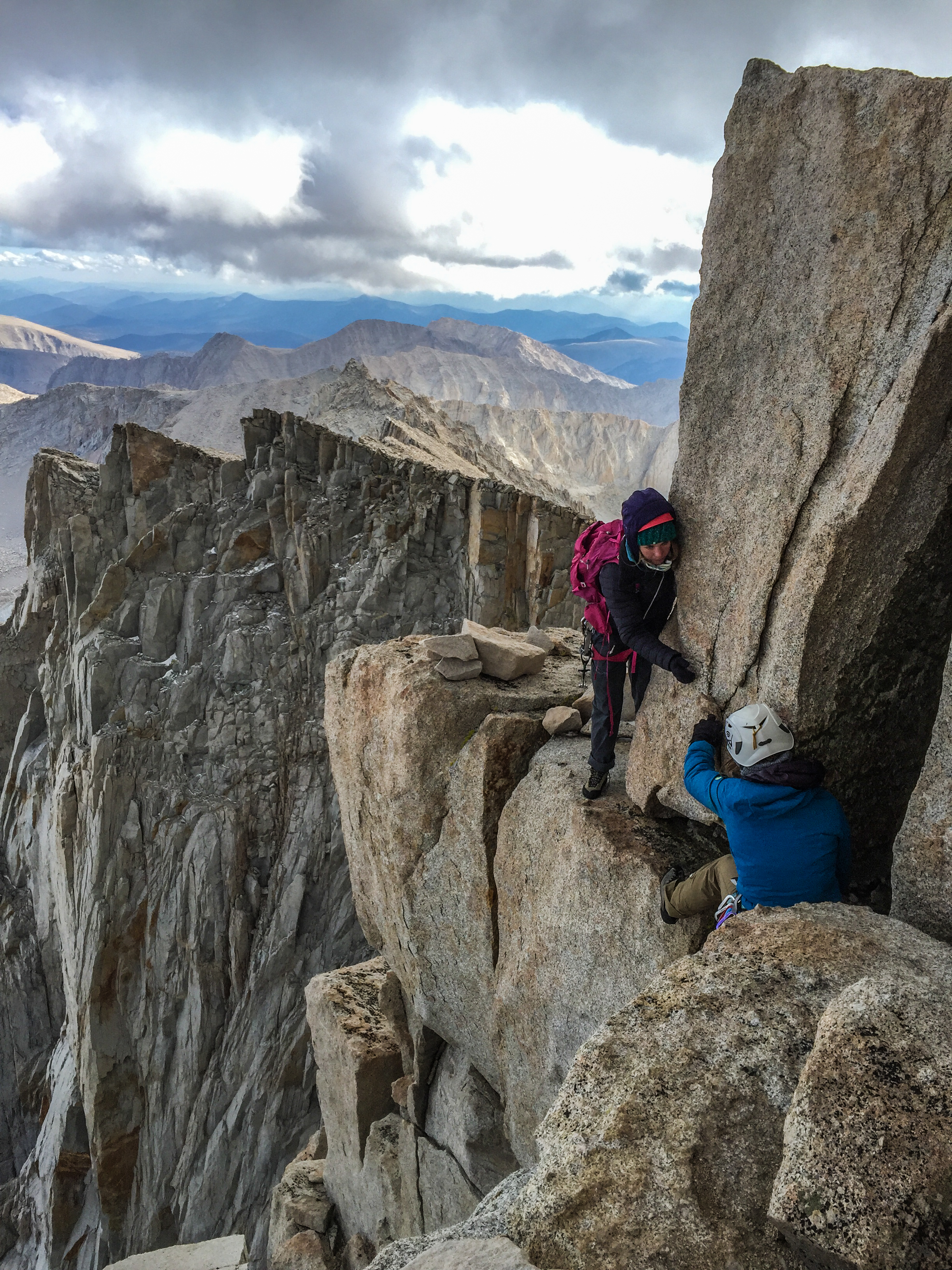 My hands gripped a small undercling in the alcove I had been resting in. I looked up at the move I would perform. Full extension, my hand rested a solid two feet below the next good crack system. I glanced down at the worn out webbing that represented my last piece of protection; the frayed webbing I was trusting with my life.

I looked down to see if I could see Kimmy or Michelle beneath me but the cloud had enveloped us. 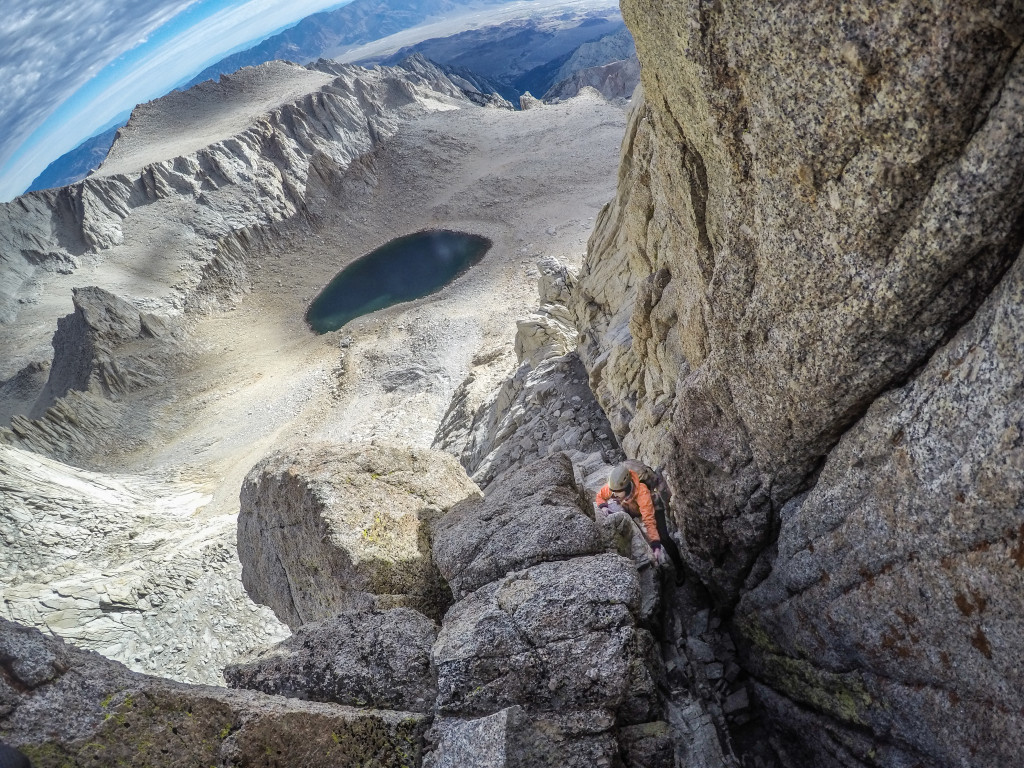 I started leading the seventh pitch of the East Buttress of Mt. Whitney as the snow began to softly fall upon us. A peaceful and calm mood settled in the air; a deceiving mood that masked the impending storm. The light snow proceeded to pick up and place us in the middle of a white out. The visibility dropped to only a couple of feet and every hold was now covered in snow and ice. Gusts of wind up to 35 mph wailed down on our team as we tried to make our way to the summit.

I set up an anchor in the small alcove I rested in and shouted, “on belay.”

I saw Kimmy first, fighting through the now snow filled finger crack. She rested for a moment on a small ledge and then proceeded up the horrendous snow and ice covered off-width. Michelle followed closely behind, careful not to fall.

Tears brimmed Kimmy’s eyes when she reached the alcove. Her bear fingertips were frozen and the rewarming process was causing something commonly known as, “the screaming barfies”. This is a side effect of rewarming frozen extremities, a pain so unbearable that people don’t know whether to scream or barf. The pads of Kimmy’s fingertips would proceed to all rip off later in the climb. 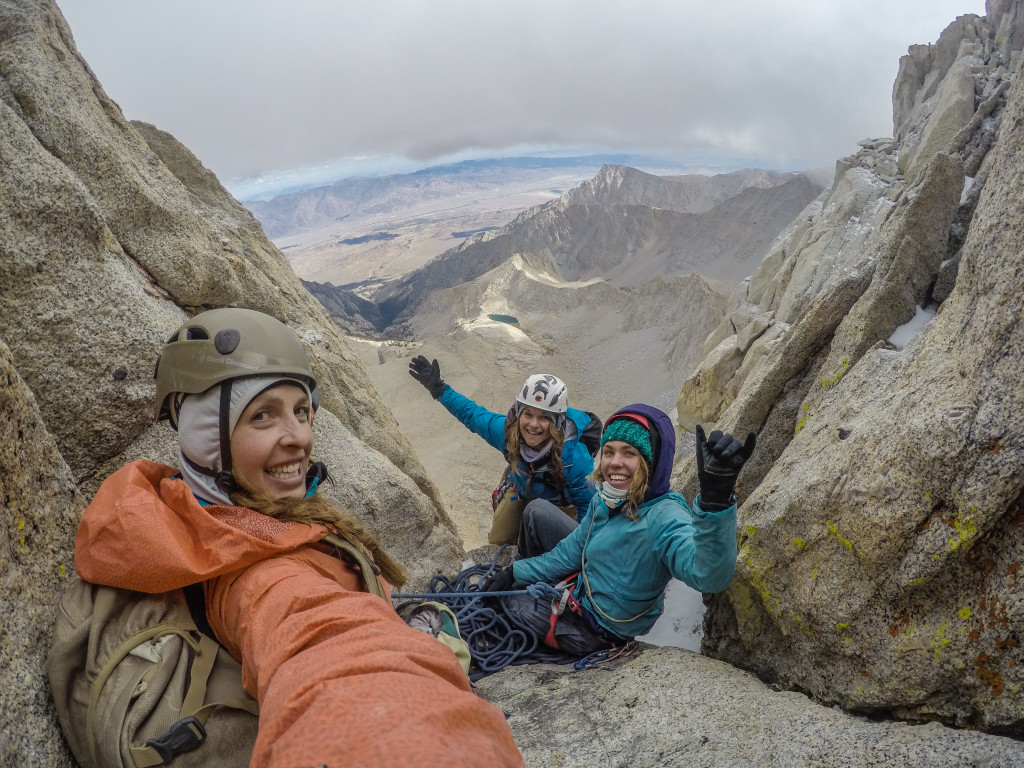 Michelle then joined us, experiencing the same all consuming pain of the screaming barfies. We sat huddled uncomfortably, in our small disorganized alcove trying to rewarm and calm each other.

“How far are we from the top?”

“Less than five hundred feet once we make it to the top of this pitch. I don’t think I can do this move though. The foot holds I would normally use are covered in ice.”

“You can do this Hannah, we can prop you up and help you reach that hold to place a good piece.”

“Yeah Hannah, you can do this. We are right here with you.”

There was a strong power to their words. Rarely do I find myself in the alpine world with an all female team. Being in this intense situation with these other powerful female athletes emanated a certain energy. We were equals on the rock and would sit and brainstorm our way through this situation.

Michelle belayed me – braced to catch a fall. Kimmy situated herself in a way to prop me up, while I acrobatically launched myself on Kimmy’s shoulder.

(Later, I found out the agony she was in while I debated the move I was launching myself into.)

I pushed myself off of Kimmy and just barely grasped the hold. I felt a wave of relief as I placed a small nut and knew I was safe. I climbed carefully to the top of the pitch over ice and snow. I set up a belay where Kimmy and Michelle met me and the storm started to slowly dissipate. The wind and clouds still made the cold piercing, but the snow had stopped. We were through the hardest part and for reasons unknown we all started to collapse in hysterical laughter. From here, we slowly made our way to the summit. 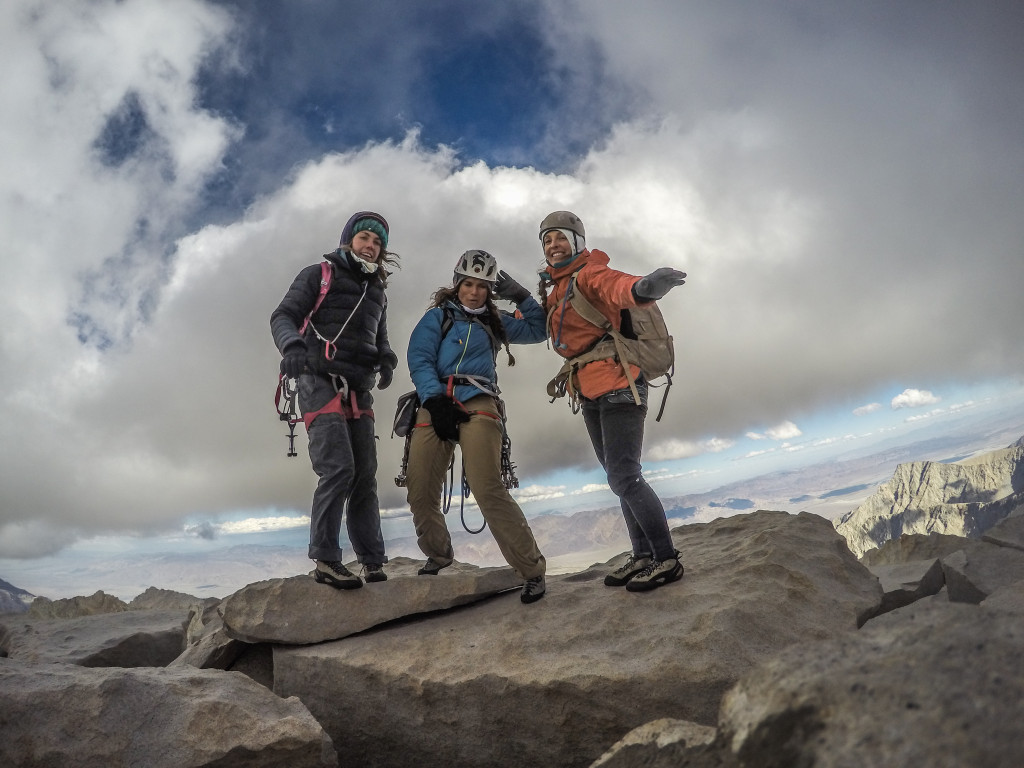 Over 40 hours awake. 30 minutes of sleep prior to starting. 23 hours Mammoth to Mammoth. Topping out on the tallest peak in the continental US through a snow storm.

I have climbed many peaks this summer. I summited Mt. Whitney once before via the Harding Route (5.10c) up Keelers Needle.For reasons I have not yet grasped, this ascent empowered more than usual – possibly because I was with such an amazing, strong-willed, all female team.

This is Hannah Lily Hall’s first piece for The Climbing Zine. Her blog is called Lily and Fox on a Rock.