Climbing In The City of Fountains by Allen Schaidle 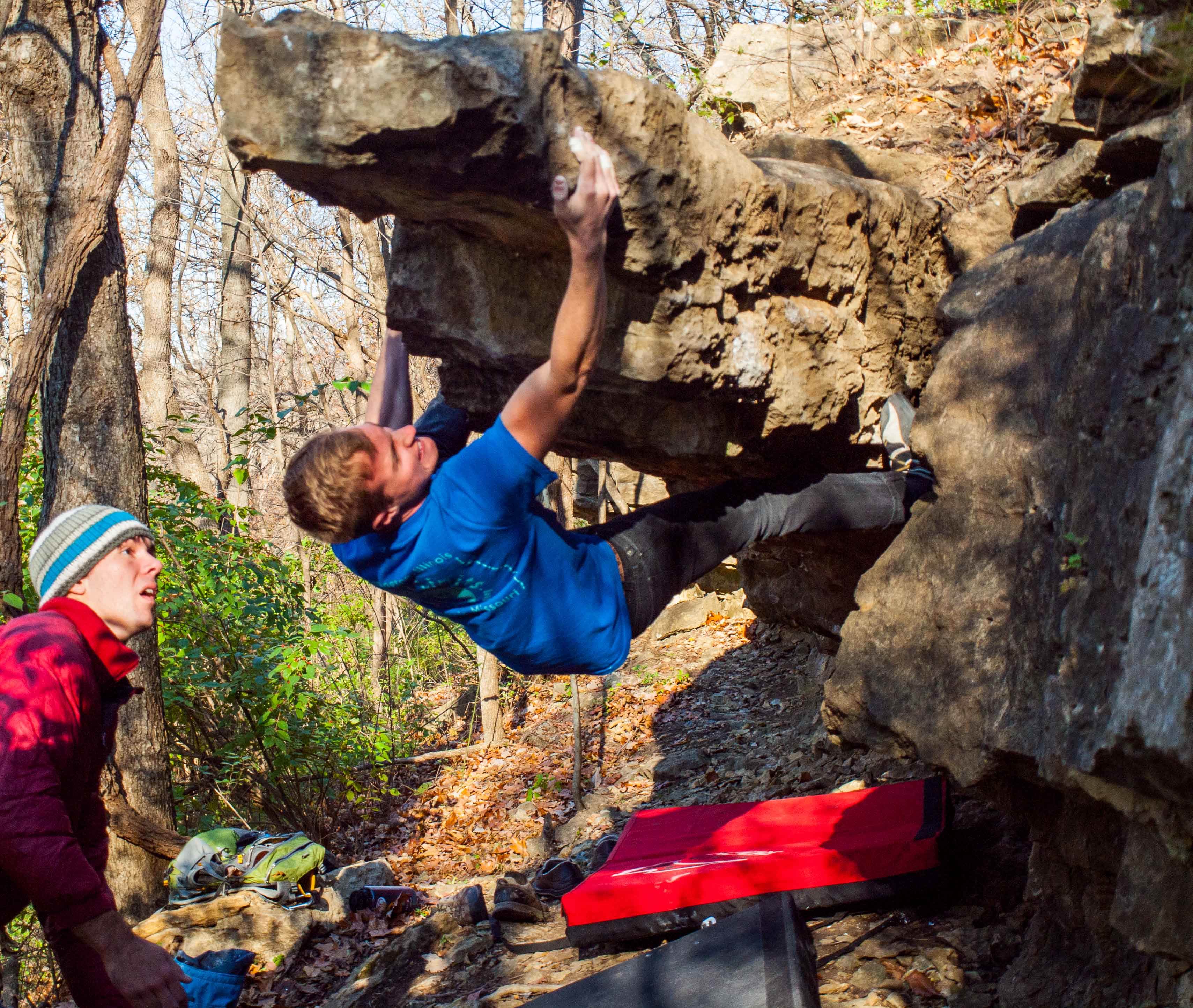 Kansas City is situated in the navel of the United States surrounded by rolling hills, which make for beautiful ever-lasting sunsets, but sadly, they don’t produce ideal features for notable hard sends. Secretly, tucked away in the gut of the city, concealed in the shadows of the towering skyline, resides two crags: Cliff Drive and Swope Park. Both of which have continuously fed the appetite of rock-depraved prairie crushers with limestone for decades.

Typically, people travel to KC for BBQ, rarely for climbing. You won’t open Rock & Ice or Climbing to read about cutting-edge 5.15s established by Chris Sharma, but what’s occurring is special and illustrates a community of climbers devoted to testing their skills in their own backyard. 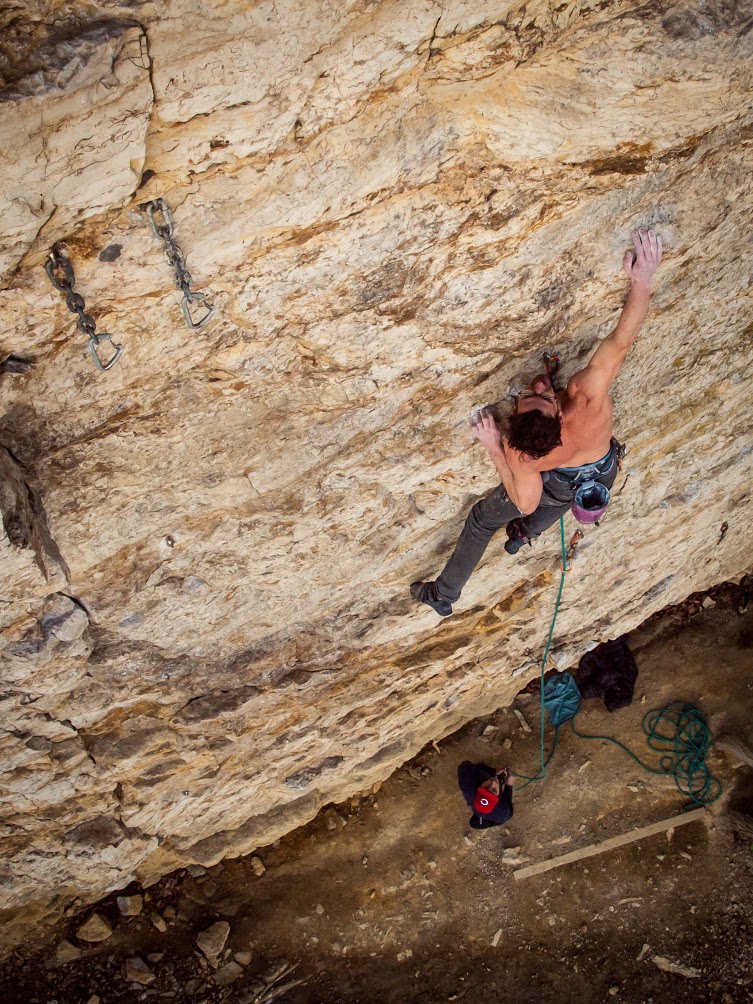 Look, I’m not arguing KC’s climbing scene rivals Boulder, but it does offer some notable climbs and has a tribe invested in their hometown. Hell, the City of Fountains has even produced noteworthy climbers like Meridian Line founder, first ascent guru, and adventure artist Jeremy Collins as well as rising name Ryan Surface who in 2015 individually placed third and second in the team score at 24 Hours of Horseshoe Hell.

Similar to other Midwest crags, it’s best to avoid climbing in the dead of winter or summer. Driving in KC after a heavy snowfall is like foreshadowing the traffic anarchy one might imagine during the apocalypse. On the other hand, the heat during summers is so intense I’ve personally witnessed people collapse because of heat exhaustion. Regardless, if the weather breaks, expect to find climbers squeezing in a session. 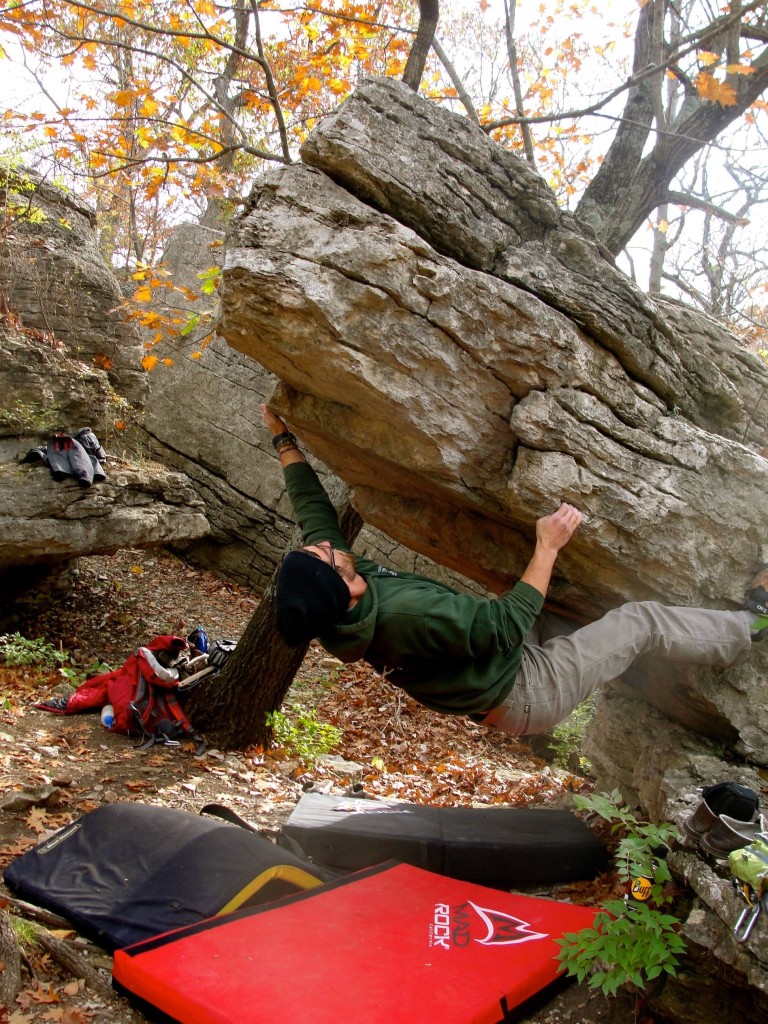 KC climbers are tough. They’ll climb in miserable conditions for the pure enjoyment of having somewhere to climb nearby and won’t utter a single compliant. Moreover, they’ll organize motor-barricades for the extended drives to such climbing meccas as Horseshoe Canyon, Jackson Falls in Southern Illinois, and even sojourn to Colorado, just for a weekend trip. But no matter what, they always return to their local crags, trying new climbs while kindling the local psyche, despite its neglect in the national or even regional attention.

As KC’s only roped crag, Cliff Drive is something of a day-session dream, but don’t worry, you can also spend multiple sessions here without getting bored. The majority of climbs at Cliff Drive are under 50 feet, requiring only one rope for a day’s fun with the majority of grades 5.10 or harder. A mixture of moderate climbs combined with a ridiculously relaxed approach, makes Cliff Drive a popular destination for KC climbers. On a nice weekday evening or weekend, you’ll find climbers scrambling up their favorite routes like Chomping the Bit graded 5.10a, trashing skin on new projects, or training for bigger walls out West. Before perfect conditions settle out on monolithic walls, like Yosemite, the walls of Cliff Drive host practice grounds for mastering aid climbing. Thanks to recent efforts on behalf of the Kansas City Climbing Community (KCCC), Cliff Drive received a major face-lift. KCCC rallied together in ridding the area of trash while restoring the overall eco-friendliness of the spot. They replaced questionable rusted chains with trusty new ones, constructed retaining walls, and cleared the belaying zone to minimize safety concerns. 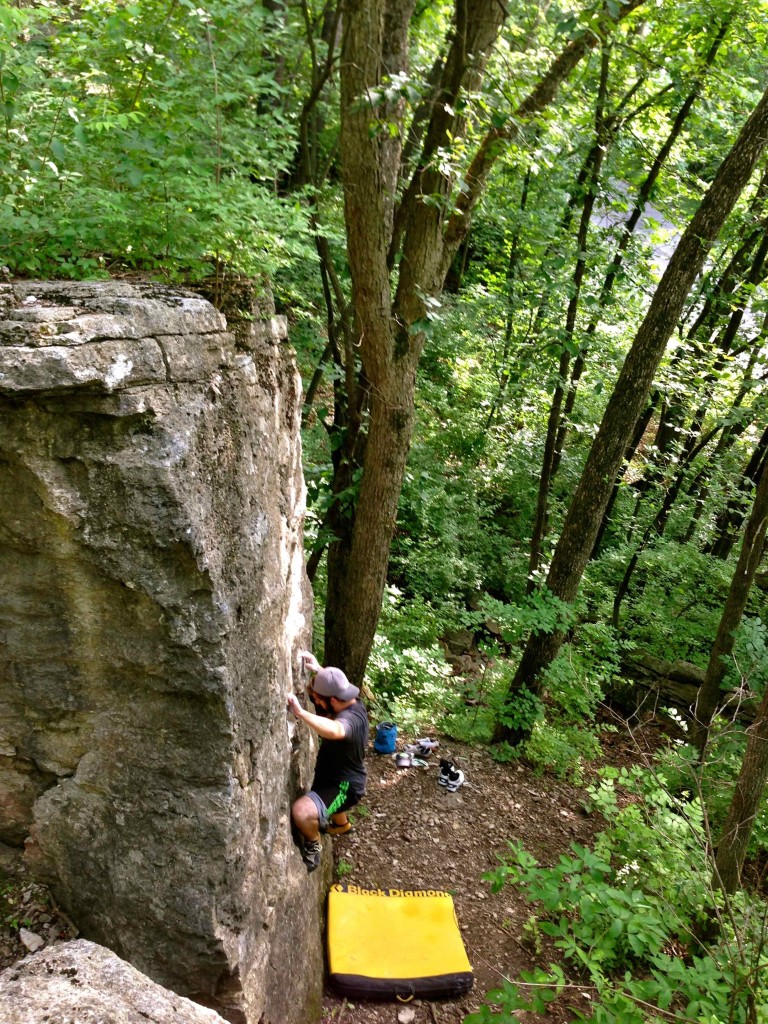 My involvement with Swope’s bouldering scene started while attending the University of Kansas in nearby Lawrence, Kansas. After purchasing a worn copy of Sean Burns’ Missouri Limestone Select, I started solo day trips. After hearing of new zones along Blue River Rd., I convinced two other local boulderers, Matt Lancaster and Mary Kate Meara, to accompany me. Both KC natives were hesitant because of Swope’s formerly sketchy reputation. Along with the likes of KC good ol’ boy Beck Johnson, we quickly discovered KC bouldering was in an era of rebirth. Old and new areas started receiving attention, such as the Fireman’s Memorial featuring KC’s only known cave bouldering, pockets along Blue River Rd. including the KC test piece the Last Rhino, Lake of the Woods boulder among the proudest lines, and some of the hardest/newest climbs residing along Oldham Rd.

The majority of the boulders are rough limestone blocks, lending themselves to short and unique features I haven’t encountered elsewhere. After a long day of climbing you can crush some infamous KC BBQ, but Matt Lancaster and I swear by Jamdown Kitchen, just outside of park, as the best post-send meal and arguably the best Jamaican cuisine stateside.

Next time you’re passing through KC, stop by and try a route or two. Natural climbing in a heart of a major American city is a irreplaceable experience. While I had to sadly leave KC for the time being, I know the community still thrives or as KC rapper, Tech N9ne, put it, “Thinkin’ they can stop the heart of the Kansas City, but the heart of Kansas City is beatin’.”

This is Allen Kenneth Schaidle’s first piece for The Climbing Zine.