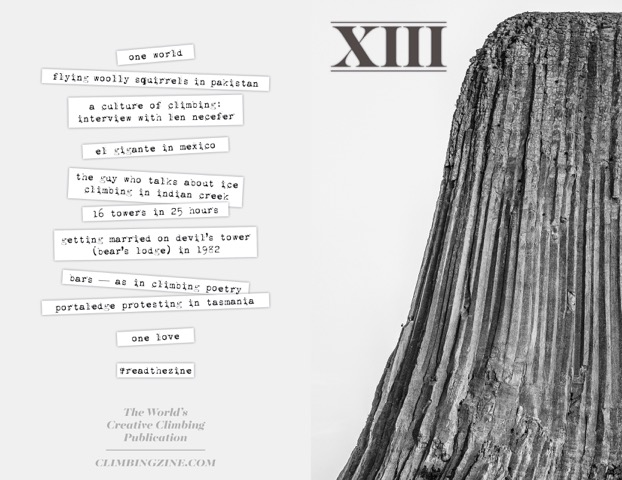 Volume 13 of The Zine is now printed and available to order. Here’s a look at the introduction from our publisher, Luke Mehall. Cover photo by Sagar Gondalia.

Welcome to Volume 13 of The Climbing Zine. From the vertical search of flying squirrels in Pakistan to navigating big walls amongst poppy fields in Mexico to portaledge protests in Tasmania—this is an eclectic version of The Zine, to say the least. 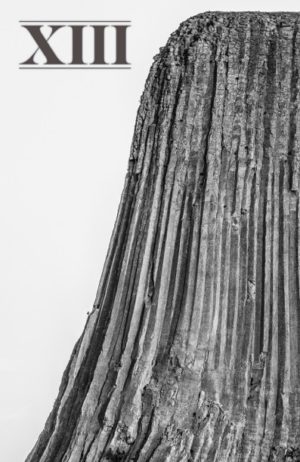 For the last couple issues, we’ve tried to set a theme of One World. It turns out The Zine has a mind of its own. With Volume 12, the stories overwhelmingly had themes of loss, tragedy, and cautionary tales. It was a heartbreaker to assemble, and I wonder if anyone actually made it through that issue without crying. I hope not. I know I shed some tears while editing.

This publication started off on a whim and really was only meant to have one volume. At this point, only a small percentage of our readers have probably seen Volume 1, so let me describe it a little. It was black and white and stapled together, with a fuzzy cover of a silhouetted climber (my buddy and former skater Adam Ferro). I’d created a couple other zines and stayed true to the original ethos of the DIY, punk/skate culture from which the modern zines emerged.

Somehow, after I published the first zine, people kept sending me climbing stories, and so we published Volume 2. To be honest, the quality of Volume 2, at least in the terms of appearance, was even worse than Volume 1. The cover was even scratchier, the photos even blurrier. I wrote the entirety of Volume 3 myself, the first and only time that will ever happen. I’d lost my job in the aftermath of the economic crash and had all these stories in me, so I wrote them out. In many ways, The Zine saved my writing career.

With Volume 4, I liquidated what remained of my savings to move toward an all-color format. My friend Mallory Logan did the design, and she remains our art director to this day. It was a big risk, but it was what had to happen. Climbing essays need proper art to accompany them. We’d totally abandoned the punk concept of a zine, but what is more rebellious than throwing convention to the wind? I’ve always been more hip-hop than punk anyways. (In Volume 5, I wrote a piece called “Hip Hop and Climbing.” Volume 5 is out of print, but the story can be found online.)

The stories we collected for this issue are closer to the mark of One World, yet as we get this volume ready for publication, I’m realizing that setting a theme for The Climbing Zine is counterintuitive, because there is a sense of improvisation, randomness, and creativity that shapes each and every zine; the best adventures come from embracing the unknown. Having said that, let me elaborate on why I wanted to push for a “One World” theme.

As with any good theme, One World can have at least two interpretations. The first, in my mind, is to publish stories that take place beyond the borders of the United States. It’s a big world out there, and as The Zine grows, so does the scope of our audience; each year I ship zines off to faraway places, which really warms my heart to know someone in, say, Norway will be opening up a package of zines and spreading them around.

Secondly, I’ve wanted to make an intentional effort to publish stories from voices that haven’t traditionally been heard in climbing literature and in climbing media. The narrative of white men conquering mountains has been fading away for years, and now, more than ever, there’s increased participation in climbing from all kinds of people. And each and every person has a different narrative of why they love climbing and why it is important to them. As a reader, I want to hear everyone’s stories, and the more diverse our beloved sport becomes, the richer it is for each and every one of us.

Thirdly—is thirdly even a word?— now that our country has been hijacked by this racist, misogynistic, xenophobic president, it seems more important than ever to spread messages of peace, love, respect, and equality. One world. One love.

As the publisher of The Zine, I’ve tried to always allow climbing to be a medium in our stories, not simply the end all be all, but a vehicle and a muse for individual expression. I feel like I want every issue to be a One World issue, and additionally, I’m going back to letting the themes set themselves for The Zine, to put total faith and trust in the process—just like it was when we started.

Having said all that, I want to make it clear that this zine is open to all climbers who respect one another, and we will continue to operate with our ethos of embracing each person’s writing voice and style, rather than editing everything down to make it sound like one style.

I hope you enjoy this issue as much as we enjoyed putting it together. And as always, feel free to reach out to pitch a story, an idea, or some art. Our existence not only depends on people supporting The Zine by buying it but also by contributing to it.

And, of course, if you love The Zine and want to keep it going, please subscribe at our website—it’s the number-one way to support us—and if you’re a traveling climber, you can choose the “Dirtbag Treatment” option, and we’ll contact you to find your whereabouts as each issue is released.