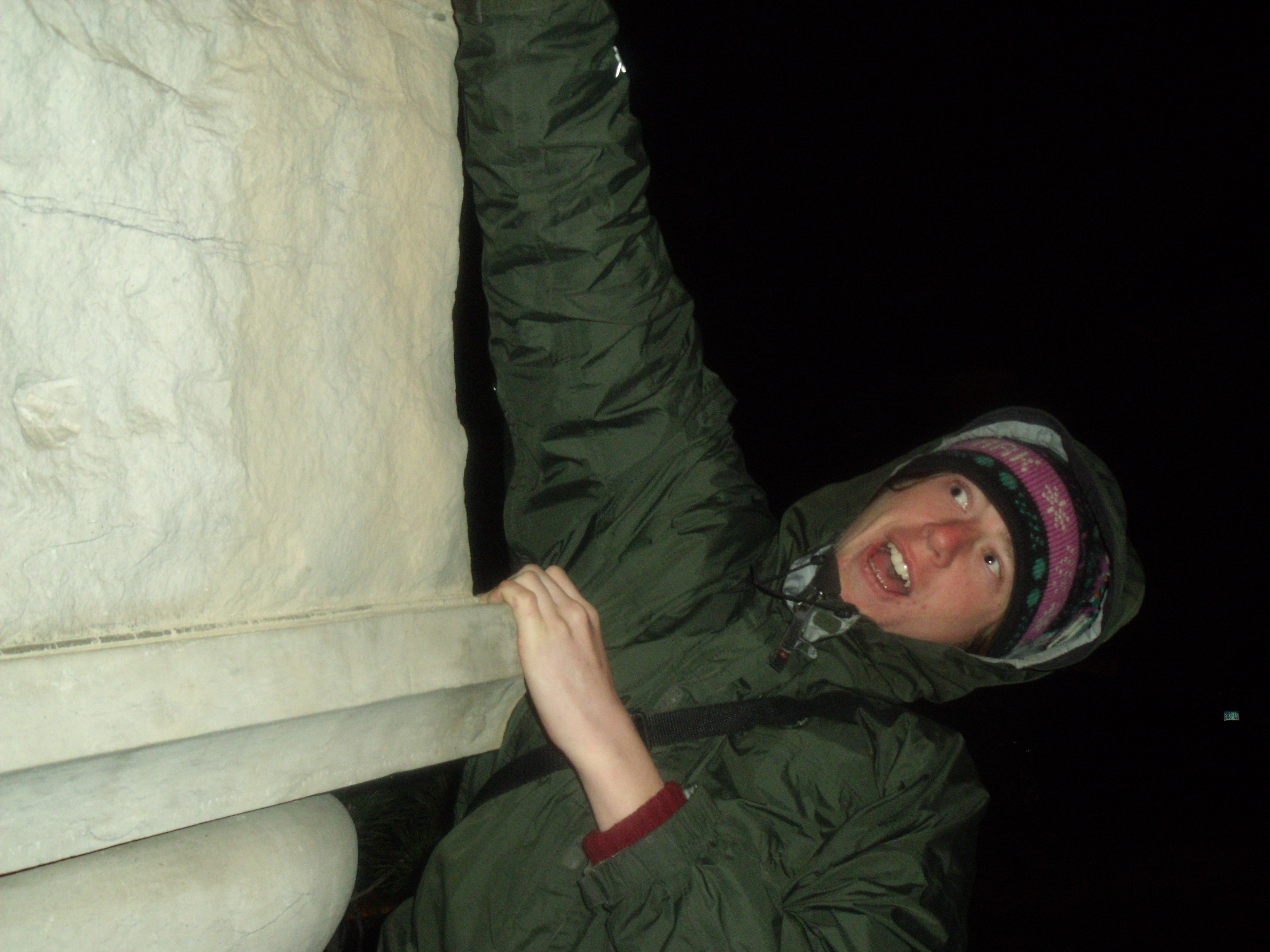 Conditions in the winter were far from ideal for buildering in Gunnison; ice and snow made climbs more difficult and cold temperatures made it harder to grip holds with numb fingertips. But it made sense during the winter. Climbers don’t get that rush that they are dependent upon as often, the rush that comes from getting scared and using the muscles of one’s body to the utmost extent.

I knew I was dependent on that fix as much as the guys in the Alamo were dependent on their numerous shots of Jack Daniels and the nicotine from Marlboro Reds. Hell, I’d been addicted to numerous things before I started climbing and I knew I was hooked on the climbing buzz.

That may have been some self therapy there, because it doesn’t exactly provide the segue I was looking for, but it brings us to the next part of the story, the summertime, where a climber in Gunnison could get that fix any time he or she wanted to, provided they didn’t have to work and it wasn’t raining. Gunnison is surrounded by rocks (they don’t call ‘em the Rocky Mountains for nuthin’) in every direction and someone was always psyched to go climbing.

But there were still some of the usual reasons to builder, not getting any lovin’, and, well, you were fired up from partying all night, and there was no reason to go home.

This summertime buildering session occurred during the typical hours, just after the bar closed at two thirty in the morning. The group consisted of yours truly, P-Real, B-Boy Roy, T-Drizzle and Lucy. The stars shined bright, the moon lit the town up as much as the streetlights. The air was cool as it always is in a mountain town at night. The streetlights lit up one side of an old church, which was the first climbing objective for the evening. I was pleased that the first building was something that had to do with religion and not the law, thinking that trespassing with the church would provide less harsh consequences than the government. From what I’d heard, nothing was off limits that particular summer: banks, government buildings, rumor had it one night these guys even climbed on the police station. So we arrived at the church, a forty foot tall, white brick building, which appeared to be from the early nineteen hundreds, that narrowed as it went higher, slender at the top, with a four foot tall cross on the tiny roof.

The first attempted climb was too hard, and it was dark, as neither the moon nor the streetlights illuminated it. The moves were big reaches for small holds, on the white bricks that a fingertip pad would barely fit on. No one got too far, and I was glad because the climb would have finished forty feet off the ground and a fall from up there would involve some other people in uniforms we would rather not have contact with, Emergency Medical Technicians.

So we moved around the church following P-Real, who was the reason behind the partying that evening, considering it was his birthday. P-Real found a route that was to his liking, with bigger bricks to hold onto, a path of least resistance to the top of the church.

Examining the psyche of P-Real would reveal that he has his mind mastered to a higher level than our friend Sparks. Unlike Sparks, P-Real has a mind that is just as tuned for climbing as his body. Watching P-Real climb was like watching a master of the rock, not necessarily all the time, for this was just the 23rd birthday, not enough experience to become perfect in the vertical terrain, but he’d shown that he had what it took to be a successful climber. He’s also a southern boy, which in Gunnison made him stand apart from nearly every other climber. P-Real was a remarkable and unique character, that everyone in the climbing community knew, or knew of. So all four of us listened, when in his distinct southern drawl he looked up at the arête on the side of the church and uttered slowly in a rather monotone way, “I’m gonna climb this fucker.”

So off he went up the church, which conveniently was facing both the moon and the streetlights. P-Real climbed in his trademark warrior way, no hesitation, no hint of nervousness, fluid movement from brick to brick, which protruded from the side of the church generously and at equal increments. In this manner, he quickly entered a zone, thirty feet off the ground where a fall would be disastrous. Though he had four of us spotting him, we could do little to protect him from a six step concrete stairway that lay directly in his fall path. A metal railing eight feet long to the left of the stairs ensured that if P-Real fell, things would be bad, real bad. The stairway and railing was an emergency exit for church patrons, but for P-Real, if he were to fall down on this, it would spell disaster, and possibly a chance to meet his maker.

All of us spotters, T-Drizzle, Lucy, B-Boy Roy and yours truly, gave each other a look. A look that we didn’t need to put into words that P-Real could hear. The look that had the intensity that a normal serious climbing situation would have, but this was different: it was three in the morning, and this southern boy thirty feet above us on the side of a church had been drinking whiskey all night.

“You got this P-Real,” Roy said, defying what he may have been thinking, but sending up necessary encouragement.

P-Real climbed five feet higher and was near the lip of the roof of the church, just below the cross, into the unknown. He had no idea what it would be like, and since none of us had climbed it, we couldn’t offer any beta. As he reached up to the top of the church, a small chunk of brick falls down to the ground, hitting the rail, and making a “clink” sound. Unfazed and buzzed on adrenaline, P-Real kept searching for a handhold, the sound of his breathing just slightly increased.

A minute later, he was still in the same spot, his left hand is feeling to top of the church for a hold. Another small chunk of brick, quarter sized, fell down, this time landing on the grass. This prompted Lucy to speak her first words since P-Real left the ground, with a tone of a mother that has warned her disobeying children one time too many, “P-Real you get down from there right now!”

A cold silence followed her words, and immediately P-Real started his retreat, gently climbing down the bricks, forty feet back to the ground, back to the horizontal. Lucy gave him a motherly look, we all offered a handshake, and with that P-Real had survived another birthday, and another buildering session had ended.

T-Drizzle, B-Boy Roy and P-Real made it through the summer without suffering any injuries. However, the more I talked about buildering with friends the more I heard stories where people got hurt doing it. Ironically, these people were usually top notch climbers, who had spent countless days taking big risks on big walls and boulders, and these were their most severe injuries.

Regardless, just as STDs don’t stop random drunken hookups, people will still continue to builder. There is a fire lit in the spirit of youth, an energy some express by doing graffiti on billboards and trains, which some call art and others vandalism. Others may skateboard, putting their energy into that sport, onto the concrete, grinding a rail in a park. Some see skateboarding as trouble, others use it to keep out of trouble.

Buildering is very risky, but it is also an expression: a manifestation of energies, in the twilight, buzzed, not ready for the night to end, determined to live more, to transform. To builder.

This piece is an excerpt from Climbing Out of Bed, a definitive collection of rock climbing and mountain town stories, available in print and on Kindle and Nook. 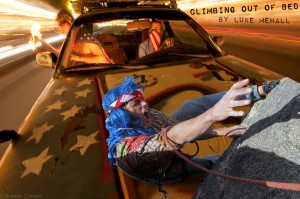