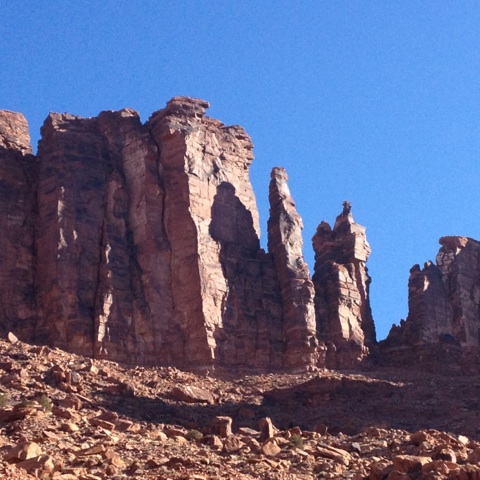 “I don’t care what the label says, they are skinny jeans.”

Jonathan and I are up River Road, near Moab. It’s January, and I’ve just survived another Outdoor Retailer trade show up in Salt Lake City. I say “survived” because in addition to long days of talking business and late nights of partying, a toxic layer of red smog hovered amongst the city for the duration of the show. I left praying for the people of the city, for a storm to roll through the city to clear the smog out, and leave a healthy blanket of snow.

[story by Luke Mehall, publisher of The Climbing Zine]

This high pressure, blue bird weather is perfect for climbing though. And in January there are hardly any climbers around, save for the locals. It’s reminiscent of the old days.

And we are old guys, sort of. Maybe we are just soft. Whatever the opposite of an alpinist is, that is us. We live in Durango and don’t like to be cold. We prefer to climb in warm conditions.

So when we arrive at our objective for the day, Infared (5.11+) on the Big Bend Butte, and its still in the shade, we wait until it goes into the sun. We tape up our hands, listen to hip-hop, and Jonathan makes fun of my skinny jeans.

The desert is serene this time of year, and we drink it in. Silence is a rare thing these days, and my mind needs it. It’s so quiet there are twenty-minute stretches where we don’t even see a car go down the winding road.

Jonathan leads up the first pitch. Though it is only 5.10 it overhangs and has several roofs that try to spit you out. I second the pitch, and frantically scream, “up rope, up rope” several times.

I found out about this climb the old fashioned way, someone pointed to it, and said I should climb it someday. We were huddled around the Big Bend Boulders below (alliteration anyone?) and a Moab local gave it a recommendation. He spoke of it being, “one of the best around”.

The second pitch was squirrely. There were two variations and I took the off-width straight above. Soon the off-width ran out, and so did the protection. I ended up wrapping some webbing around a boulder, and shot left for some face holds, taking us right below a splitter. 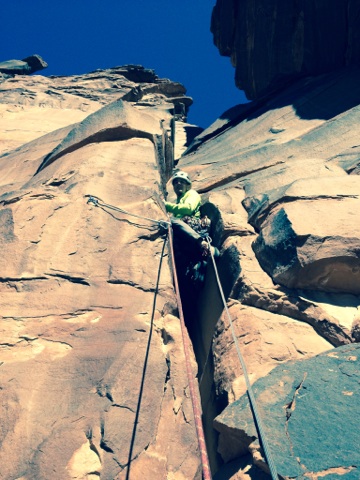 The author knee bars while wearing skinny jeans, or as he claims “regular fit”.

Jonathan led the splitter, a wide hands pitch, and then we were high up on this tower, with one pitch to go. We were still basking in the January sun, but of course the winter days are short, and the nights are long. We had only a couple more hours to get to the top of this thing, and then bee-line it into Moab to eat at Milt’s. (If you don’t know what Milt’s is please change that next time you’re in Moab, well, unless you’re a vegan.) 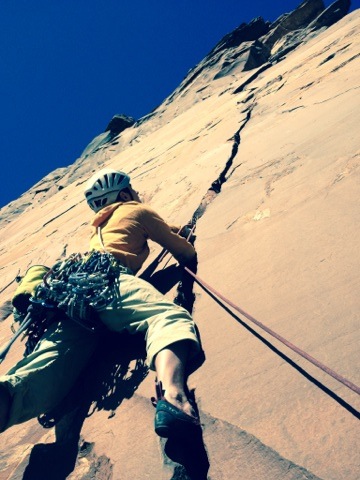 Jonathan Mitchell on the third pitch of Infared.

The pitch above overhangs and stands in between you and the summit. I had butterflies and was all sorts of nervous, as I started up. I secured some gear to keep me from falling on my belayer, and then set off in a series of punchy, boulder problem-like moves. Near the end of the pitch the bullet rock and perfect bolts were gone, with juggy, sandy, climbing finishing the pitch. I stood on the summit, yelling and whooping, and Jonathan joined me. 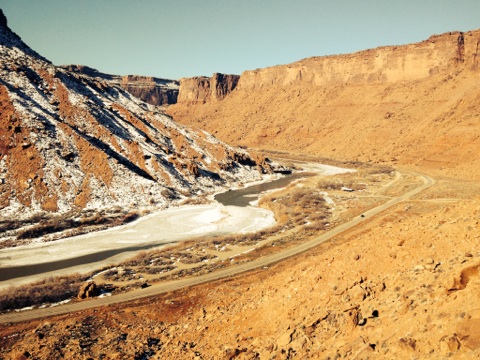 And then we experienced the difference between winter desert climbing and spring desert climbing. We looked around and it was snowy on the ground, and the light was leaving us. Time to rappel, the worst part. No time to bask in our glory, only a nauseating rappel into the void.

It ain’t over until your ropes hit the ground. Luckily our ropes pull from the rappels, and we’re tired, but happy to be headed into Moab, and then home to Durango. But, alas, Milt’s is closed for the off-season. Oh, well, I probably wouldn’t want to be seen at Milt’s wearing skinny jeans, anyways.

Luke Mehall is the publisher of The Climbing Zine, and the author of Climbing Out of Bed. His second book, The Great American Dirtbags, will be published this spring.

This story was written for the Deuter USA blog.