The Secret Spot by Joy Martin 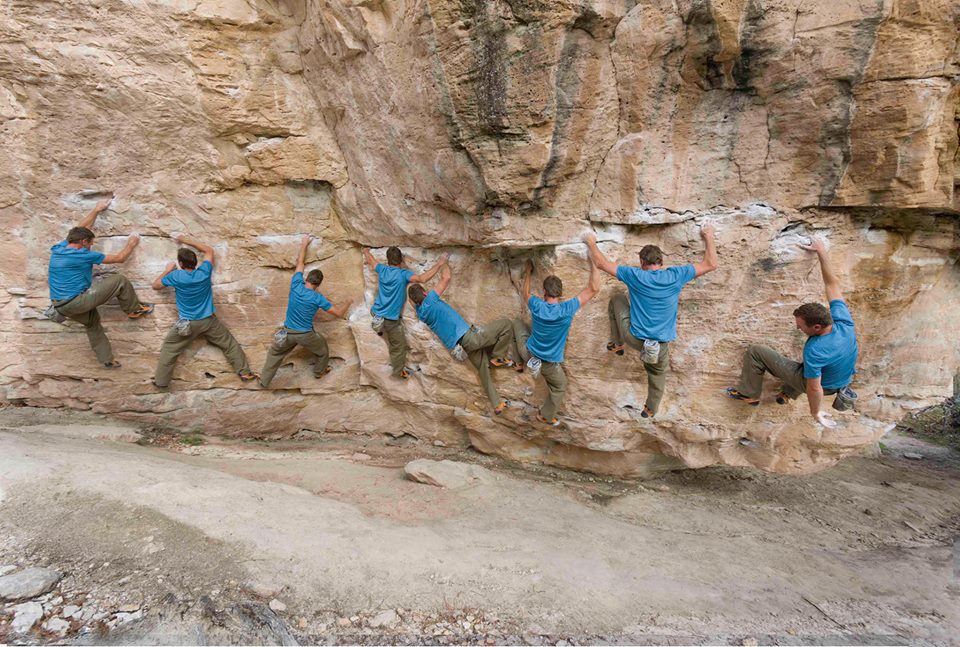 If these rocks could talk, they’d tell a hell of a story: one of nature and development, of perseverance and triumph, of mountain lions and men.

This piece is from Volume 9. Subscribe here to support independent print media.

This tale is set in one of Durango’s playgrounds, where the bones of an ancient forest creep around a labyrinth of wildly complex ninety-seven-million-year-old Dakota Sandstone boulders strewn along the western foot of Animas Mountain. The largest chunks are bigger than houses, pockmarked by wind and water, implanted with corals and brachiopods, hosting tufts of grass, lichen, and tiny trees.

Wildlife migrate between these conglomerates, and it’s not uncommon to see a deer carcass draped, gaping-mouthed, over a fallen log—remnants of a cougar dinner.

To be so close to civilization, this place is superbly wild, a quiet reprieve at the flanks of a tilted plateau away from the buzz of Durango. This place knows no closing time, no season better than the next, no judgment on any who enter—and any can enter because this place is protected open space.

Like most things free, it’s easy to take this place for granted, a place with a half dozen names: Junction Creek Boulders. Jacob’s Cliffs. Dalla Mountain Park. Sailing Hawks. Loiterland. The Secret Spot.

Cowboys, Indians, miners, and hobos have their own tales—and names—of this place from a time when everything was open space. But those days are long gone. As the city grew and outdoor recreation became more popular, a need arose for protection of The Secret Spot, and by the 1990s, someone needed to speak up for these silent stones. 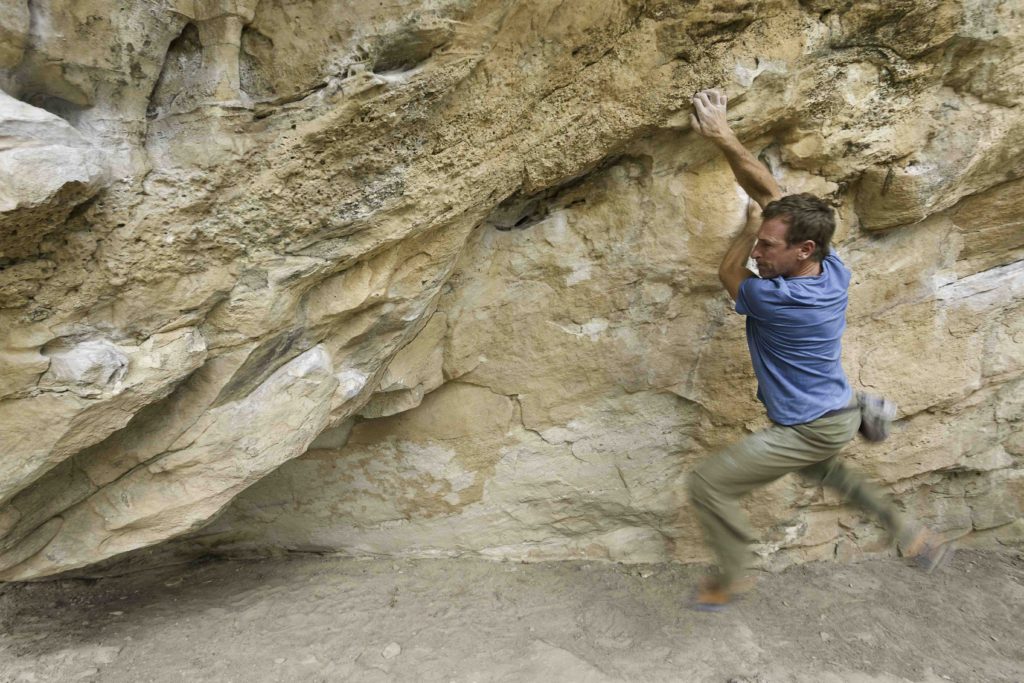 Linhart swinging around on the Sacred Traverse. Photo: Ben Brashear

In the 1970s, there were no restrictions on driving to the top of Animas Mountain. Why wouldn’t a wily bunch of teenage climbers explore to their heart’s content? Thus, the rowdy forays and curious feet of some of Durango’s original dirtbag characters led to the winding trails of Sailing Hawks, trodden by the hope of endless possibilities.

“They were the ones who were driving their four-wheel-drive vehicles up into those areas for parties and climbing exploration,” says local climbing legend John Duran.

A Spanish Indian from Ignacio, Duran first tagged along with this rogue bunch in 1975. His comrades described him as strong, quietly confident, inspiring, ahead of his time, and silent—oftentimes bouldering barefoot. He quickly earned the nickname “Ninja of Sailing Hawks.”

“It was the period of old-school ethics,” says fifty-four-year-old Duran. “Pure movement was the norm. We could create problems that were not there originally or repeat the existing ones and add our variations when we were stronger. I really loved the simplicity of it back then. This was our Golden Age.”

It was during this Golden Age that Duran encountered the most memorable rock in all of Sailing Hawks: the Euro Boulder. In those days, the problems were “futuristic,” says Duran, recalling one traversing line in particular that the gang labeled Bullshit.

“People would just walk up and stare off at its size and say it was too big to climb,” says Duran. “So most people just played around on the easiest portions and scrambled to the top to party.”

But Duran saw Bullshit differently. He admired it as an entirely doable one-hundred-foot-long 5.13B/C traverse.

“I have a high-life condition,” says Duran. “So I believe in myself. Back then, I believed that if my climbing mentors could do seemingly impossible ascents, then why not my friends and me?”

As Duran innovated, the next generation of climbers poured into the scene. The laid-back native enjoyed introducing the young guns to the rocks he knew so well. On a rainy day in 1997, twenty-five-year-old Pennsylvanian Rush Linhart joined Duran for bouldering at Jacob’s Cliffs. Duran recalls Linhart trying to heal from a recent breakup: “She broke my heart,” says Linhart.

“I was beside myself, humbled and bummed, because I knew I wanted to do that,” says Linhart, who was climbing 5.10/5.11 at the time.

“I remember Rush coining the term Sacred Traverse,” says Duran. “I think he felt a spiritual connection with it.”

But Bullshit was so much more than a spiritual connection for Linhart. The problem morphed into the sole focus of his being.

“When I saw him do the Sacred Traverse, I was like, holy shit, it’s going to take a lot to get this strong.”

For the next two and a half years, Linhart poured every bit of his energy into the Sacred Traverse. Through multiple injuries, gut-sucking diets, disciplined fasts, the determination of an ox, and the heart of a lion, Linhart finally sent it.

“That rock changed my life,” says Linhart, who sometimes refers to himself as Lionheart. “It was—and is—my greatest teacher.”

After celebrating his hard-earned send of Bullshit-cum-Sacred Traverse, Linhart got back in the saddle and moved on to his new goal of the Triple Crown: three traverses, back and forth and back again, in one go.

“At the time, I was camping there, too,” says Linhart. “I would hear drums while I was falling asleep. I could feel the past.”

While Linhart was spending days and nights perfecting his craft, sleeping under the cliffs of The Secret Spot and Junction Creek Boulders, he wasn’t the only one there. These woods also served as the perfect hideaway for squatters, and trash was rampant. But this wasn’t their land to destroy. It wasn’t Linhart’s either. It belonged to Jake Dalla, a developer who’d built the neighboring subdivision called Sailing Hawks.

Dalla didn’t mind that folks recreated on his property, but the non-paying dwellers frustrated Dalla to no end. He threatened to fence up Loiterland entirely if the refuse and abuse didn’t get under control, and he even had a bulldozer carve a chunky road through the enchanted forest.

“As I was working on the problem, I would have nightmares of Sailing Hawks,” says Linhart. “There’d be a house built around the Sacred Traverse, and I couldn’t climb it.”

Beyond Dalla, another force reminded Linhart of the land’s ultimate possessor.

“Sometimes in my dreams, mountain lions were coming toward me, stalking me,” says Linhart. “One night, I heard one scream, charging the tent. The next day, I took the tent out of there. I knew it wasn’t right anymore to use the land that way. I knew it was the lion’s territory, and it was my job to preserve and protect it.”

“That animal told me to take action,” says forty-four-year-old Linhart. “Because the mountain lion is a symbol of leadership.”

As Linhart meditated in The Secret Spot, seated on a big boulder (what he calls an “antenna for wisdom”), he uncovered the magic of Sailing Hawks:

These rocks actually do talk.

“It was super quiet,” says Linhart. “Nobody was there. I realized the only way to save The Secret Spot was to sell it to the city. The land told me to write letters to Jake Dalla. The Sailing Hawks told me, the mountain lions told me, the trees told me. So I wrote to Jake, You have to sell it to the city. This is what the land tells me to tell you. Signed, From The Land. Then I’d put them in his mailbox.”

“I just didn’t want him to associate it with another person telling him what to do,” says Linhart. “I just wanted to plant the seed.”

“We recognized the value in the Jacob’s Cliffs area,” says Bill Manning, former director of Trails 2000. “The recognition came from the property owner warning that maybe the public wouldn’t be welcome here anymore.”

“Some of us had heard that the landscape would be extra expensive to develop because of the geology,” says Manning, who worked with Trails 2000 from 1993 till 2006. “So that resulted in a little bit of hope that the landscape might remain an open area.”

In 2005, after much negotiation, Dalla finally agreed to sell the 178 acres to the city for a cool $4.6 million. It is one of the highest prices paid for a single acquisition in Durango history—and one of Durango’s most historically significant purchases.

After the transaction was complete, Dalla made nice again with the users, showing up at the ribbon-cutting ceremony.

“Jake loved that land,” shares Linhart. “He told us how, as a boy, he and his friends would climb a feature there called Jacob’s Ladder, a route up the cliffs that they viewed as a stairway to heaven. When I saw him that day, he stuck his hand out to shake. He said, ‘This heaven is yours now. Take care of it.’ Then he left us with a big smile and disappeared into the veil.”

“There’s this wonderful place that’s so close and so natural,” says Manning. “This is magic right next to home, and now it’s in public ownership. It made our Durango community that much more special.”

Nowadays, multiple well-signed access points make Sailing Hawks a go-to for bikers, hikers, scrunblers (a combo sport of trail running and boulder scrambling), and their dogs: each happy in their personal rambling pursuits through these landslide leftovers, crunching juniper berries or fresh snow underfoot beneath the boughs of butterscotch- and vanilla-scented ponderosas.

And then there are the climbers who deem Sailing Hawks as some of the greatest bouldering in Southwest Colorado. These folks forego ropes, shouldering a mattress and their world of hurt or drive or whatever force simmers under their skin and courses through their nature-struck veins.

Some come to flex, while others come to find solace.

The mountain lions, meanwhile, come to find camouflage in Mother Nature’s finest fashion: an all-night rain, dripping into a spring morning; a summer evening, flickering golden light through ochre-colored hardwoods crisping to fall; bewitching winters that melt back to green, once again revealing an adventure land of unbridled, whispering rubble.

“All communities have land that is held as valuable,” says Duran. “We have a sense of responsibility to preserve our resources and protect the planet and all life forms. It is everyone’s mission to become educated and get involved personally, locally, nationally, and globally. Every area has a special place if you open your mind and heart to the people, the land, and the history.”

For Linhart, deemed the Mayor of Sailing Hawks, it was his duty to make time to listen to the land—and then speak up for it.

“When you love places, stand up for them,” says Linhart. “You can help things along. You can make a park before the land gets developed. The dreams came to me to do something, and I’m so glad I did. It could’ve been another outcome. So follow your dreams.”

And for this man who’s poured his heart and soul, his animas, into the refuge, reset button, and escape plan that we run to when the world gets too loud or painful—this place is really not a secret spot after all.

“The key is not trying to keep it for oneself,” says Linhart. “Everyone should come enjoy it—and treat it sacred.”

Basecamped in Durango, Colorado, Joy Martin survives as a freelance writer who occasionally guides, ski instructs, delivers flowers, and whatever else it takes to maximize time outside. She’s partial to road trips, alpenglow, Nick Martin, and Jameson on the rocks. More about Joy on www.joydotdot.com.

The Giving Bolt, An Ode To The Bolt by Jimmy Keithley
October 25, 2020