The Pain (of the desert) by Luke Mehall 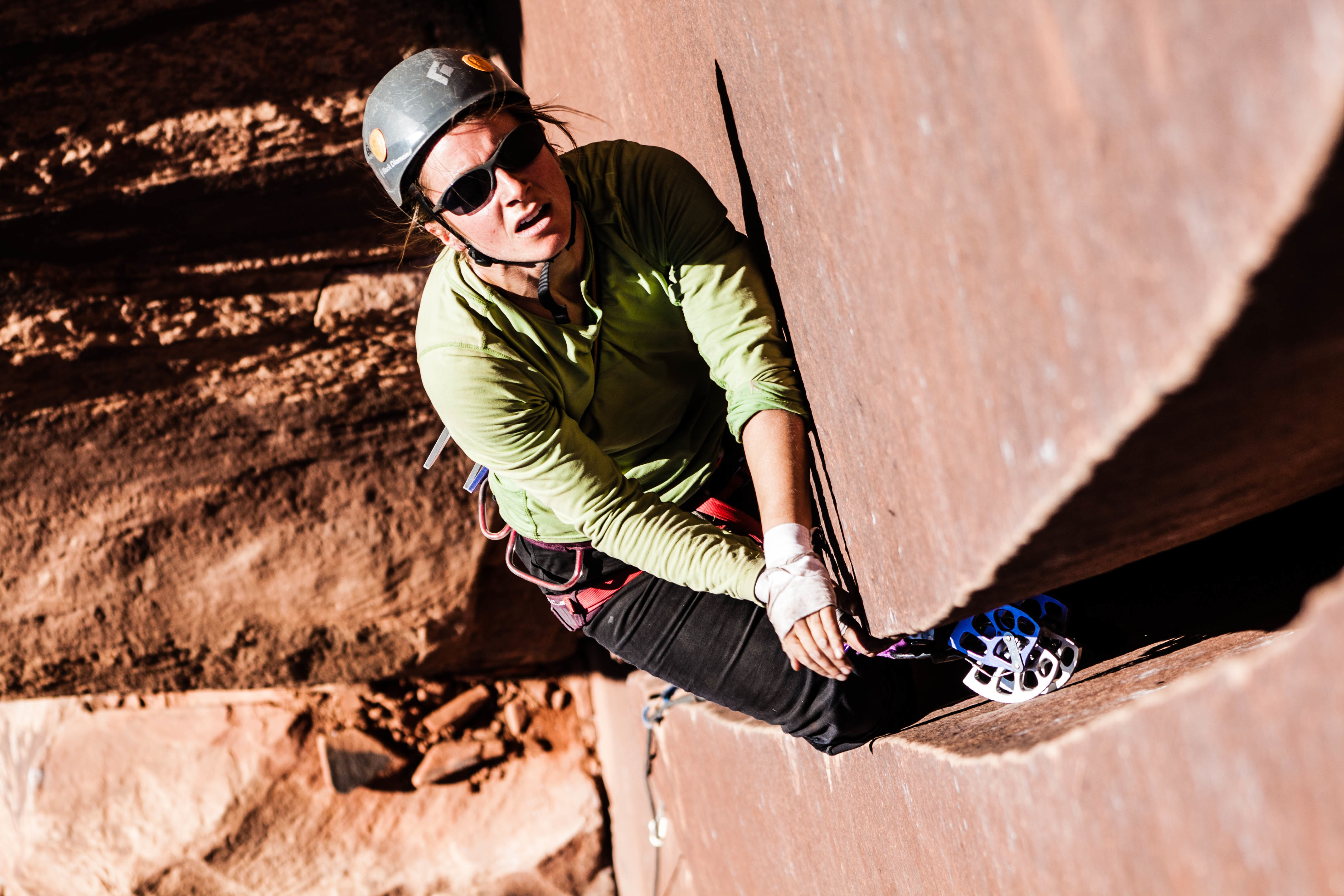 The other day, on the Internet, I read about a climber whose fingertip broke off in a crack when he fell. Fingers in a Lightsocket the climb is called, and it’s always had a reputation for being fierce, a finger crack that increases in difficulty right up until the last few desperate layback moves. The tag on the story, posted by Mountain Project, was “don’t read this at lunch.” I’d just had surgery in my mouth (a gum graph), so my stomach was already primed, and I wasn’t going to be eating lunch that day anyways because I was on a no-solids diet for a couple days, so I went ahead and looked at it.

by Luke Mehall (note this piece is an excerpt from his book, Graduating From College Me, A Dirtbag Climber Grows Up, which was published last October.) Banner photo of Kristina Weyer on Big Guy, Indian Creek by Shay Skinner.

It was a nightmare come true to us Creek aficionados who jam our limbs in cracks for fun. The climber ended up having part of his finger amputated. The silver lining was that the best big wall climber in the world, Tommy Caldwell, also had a similar injury, losing part of his finger in a home construction accident. So, hopefully this climber will find some inspiration and motivation in knowing he’s got an affliction that only briefly slowed down the famous Mr. Caldwell.

There’s a derivative of pain, which somehow enhances the experience of a good Indian Creek crack. I’ve heard and used the word masochism, but still I don’t think that encapsulates exactly what the feeling is. It’s just a touch of pain, but you don’t want the pain to win, just as a boxer might accept some punches, but he or she does not want to get knocked out; they want to be victorious. We want to be victorious. When you clip the chains after a good fight, you don’t feel much of the pain—you feel the glory; the pain has been transcended.

A proper enthusiast prepares the body before battle. Off-widths demand the most protection: tape over every exposed section of your hands, high-top shoes that protect your ankles, pants and a long-sleeve shirt, and cams that are bigger than your head. Once you’ve spent an hour prepping all of that and borrowing cams from everyone at the crag, the battle is the slowest form of free climbing that could be possible. And most stout off-widths rarely have any relief or good rests. It’s a full-on battle to the finish.

My “moment” came a few years into a fiendish pursuit of the wide. The full body challenge of a good off-width was hard for me to say no to for a while. The feeling at the end of the battle was so glorious, and the struggle had a seasoned sensation, which elevated every moment into something stupid hard and special.

It was the Big Guy that got me. To the unseasoned, Big Guy is a monster of a line—with eighty-some feet of continuous o-dub climbing, only slightly wavering in width. As every guy or gal who climbs in the Creek knows, there’s no generic way to describe a crack; the “size” of a crack is personal and how it corresponds to your body. Problem is, the “normal” way to describe a crack is by the default “man hands”—we refer to climbs as “thin hands” or “a fist crack” based on the average-sized hands of a dude. Getting back to the matter at hand though, Big Guy is a relatively “moderate” off-width for Indian Creek standards, and it’s big enough that it’s off-width for everyone, unless you were like Shaquille O’ Neal or something (probably thin hands for him); it’s one I’d climbed a few times previously, while I worked up to my goal of climbing Big Baby, which is a little bit more difficult.

I knew it would be a hard fight, but I knew I had it in me. Plus, I knew the key was climbing efficiently enough until I could get my knee in there. Of the jams one uses in the Creek, the knee is the most surprising the first time you get it. You can almost rest on it, hooking the toe of your foot on the outside of the crack while you weight your entire body on that knee. Before you get the knee, it’s desperado—hand stacks and heel-toes—but once you get that knee, it gives you a chance to breathe.

So there I am, jamming along, getting worked, but making slow upward progress, and then I try to move and I can’t. I breathe and try again. Nothing. After a minute of this personal panic, I yell down to Shaun, my belayer, “My knee is stuck.”

“I was wondering what the hell you were doing up there,” he jokingly yells back, while I’m trying self-talk to keep calm.

The panic pulses like my heartbeat, leaving me momentarily and then coming back, making me think bad thoughts. The paranoia ricochets and reverberates between these two thoughts: my knee is stuck; I must free my knee. I’m looking to Shaun for some guidance, but there’s not really much he can say. “Did you try moving it upward? Does it feel looser?”

I mumble something back each time, and with each passing minute, I’m getting more scared. I’d heard about a woman getting her knee stuck in Escalante Canyon a little while ago, and she had to be rescued out of there with a pulley system, resulting in some serious knee injuries. A stuck knee was the last thing I had in my mind when I went up this climb, which was supposed to be routine.

Then, for what seemed like an eternity, I moved my knee in a different direction and it slid out—just like that. I aided my way to the top. 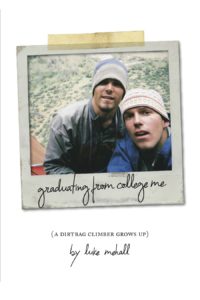 Graduating From College Me (on Amazon)

A year later at a book signing at Mountainfilm in Telluride, I met the woman who had to be rescued out of S Crack in Escalante Canyon, a place often described as Colorado’s Mini Indian Creek. It was also one of the places I cut my teeth as a trad climber, a seemingly haunted but stunning little canyon, carved into an otherwise desolate landscape.

She told me about the rescue, of the hours that she hung there, the subsequent removal of her knee, and the aftermath of the injury inflicted upon it. She was embarrassed by the incident. I tried to explain how I could understand, but a few minutes with a stuck knee is nothing like having a rescue team come to your assistance.

You just kind of think that thing is really never going to happen to anyone. You also think that you’d never lose a finger to a crack, but these things happen, in the inviting yet unforgiving place we simply call The Desert.

And, now all I can think of is that guy’s fingertip, still possibly up there in the crack, waiting for his buddies to come along and pluck it out.

Graduating From College Me (on Amazon)

Luke Mehall is the publisher of The Climbing Zine, and author of Graduating From College Me, American Climber, The Great American Dirtbags and Climbing Out of Bed.