The Mammal In The Mirror by Drew Thayer 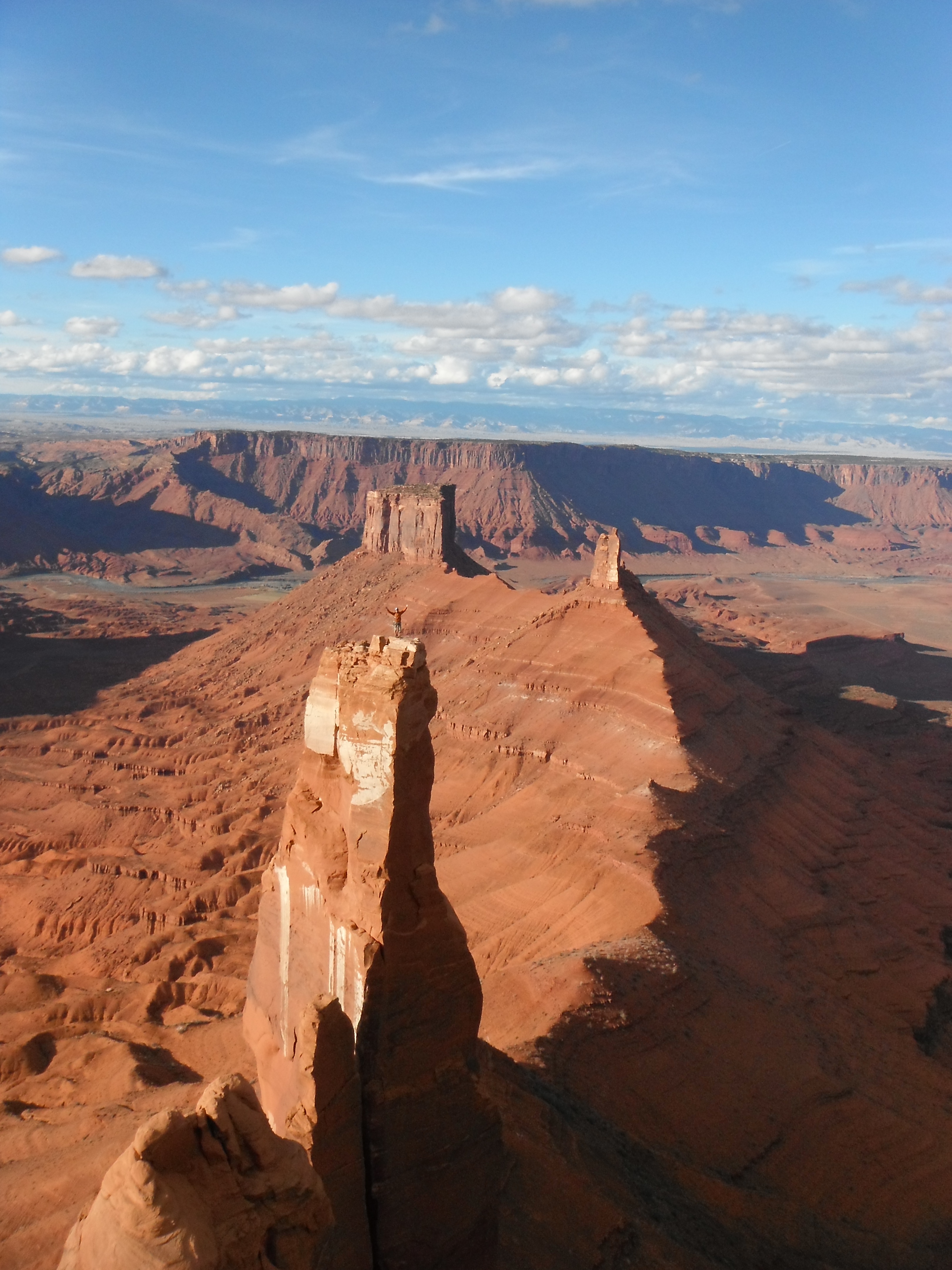 “Never pass up an opportunity to shut the hell up”

I don’t have to squint to read the bumper sticker; it’s right there in front of me and I know exactly what it says. I know, in fact, precisely what it means for me, and that by some cosmic logic I pulled off the highway to pee five minutes ago exactly so I would get back on behind this car and read these words that I’ve been thinking right in front of my eyes.

The invitation is right there. Can I embrace it? I set the cruise control to 65 and watched the patchwork valley of hayfields and pump jacks drift by, letting my thoughts slowly subside to nothing.

Like all mammals, there is war going on inside my head: two instincts, old as life itself, pull in opposite directions. Self-preservation, the watchdog of the individual life, instructs me to be cautious and scrutinize all potential risk. It tells me to eat now while I can, and hoard food for later. But a herd of self-centered individuals would fester and decay, confined to its immediate surroundings and food supply, and never discover the ample bounty beyond the next ridge. This competing instinct—to explore, take risks, and act spontaneously on intuition—has landed many a creature in harm’s way, broken, lost, or worse, but the discoveries and exploits help the community survive. This conflict between comfort-seeking and risk-seeking behaviors has been documented in birds, mammals, and human toddlers. As Homo Sapiens grows to adulthood, the most advanced and subtle logic system in the known universe learns to choose between these urges. Sometimes.

Of course, I’m not a squirrel or an antelope or a hunter-gatherer in the wilderness; by day I do gymnastics with linear algebra at a computer and in the evenings I do silly things to satisfy physical urges, like ride a bicycle around in circles or lift iron disks off the floor or climb up rocks the hard way so I can walk down the other side. I generally do not worry about my survival. I have never been predated upon, never endured famine, never weathered a storm without some kind of shelter. I am, generally, safe.

I am, however modern, still a mammal. Despite my swollen frontal cortex and its powerful capacities to organize and reason, ancient instincts pull with an irresistible tug. I squander resources on fruitless explorations, I eat far too little walking far too long just to see the other side of a mountain range. Sometimes I climb steep rocks without a rope, or use one where it wouldn’t matter. I also eat and drink too much, hoard protein bars and noodle packets, sleep when I have work to do, and avoid danger like the plague.

I am a whirlwind of contrasts, a walking paradox. I pretend to control this animal with 27 years of reasoning. I forget that the animal is 2.7 billion years old. 1:100,000,000; how’s that for a ratio. I am a rider atop a surfboard, struggling to choose the direction I paddle, unaware in my limited reference frame of the deeper currents that move me.

I am a reasonably smart person. I got into graduate school to study a field with a name most people haven’t heard of. I can do magic tricks with pages of numbers, draw order out of chaos, water from the rock. Sometimes I’m even smart enough to recognize my own powerlessness. But not that often.

I started climbing rocks because it felt good. At some point I tried climbing rocks that seemed too hard and it felt amazing and empowering. I climbed rocks for recognition, which felt pleasing, and faded. I climbed them to prove something to myself, which led to exciting consequences and a few badly sprained ankles and mostly a waste of time. Sometimes I climbed them because I felt the sun streaming down from heaven and gravity evaporate on the wind, and I felt connected to everything. The intensity of this connection fades, but once attained, I never lose it. 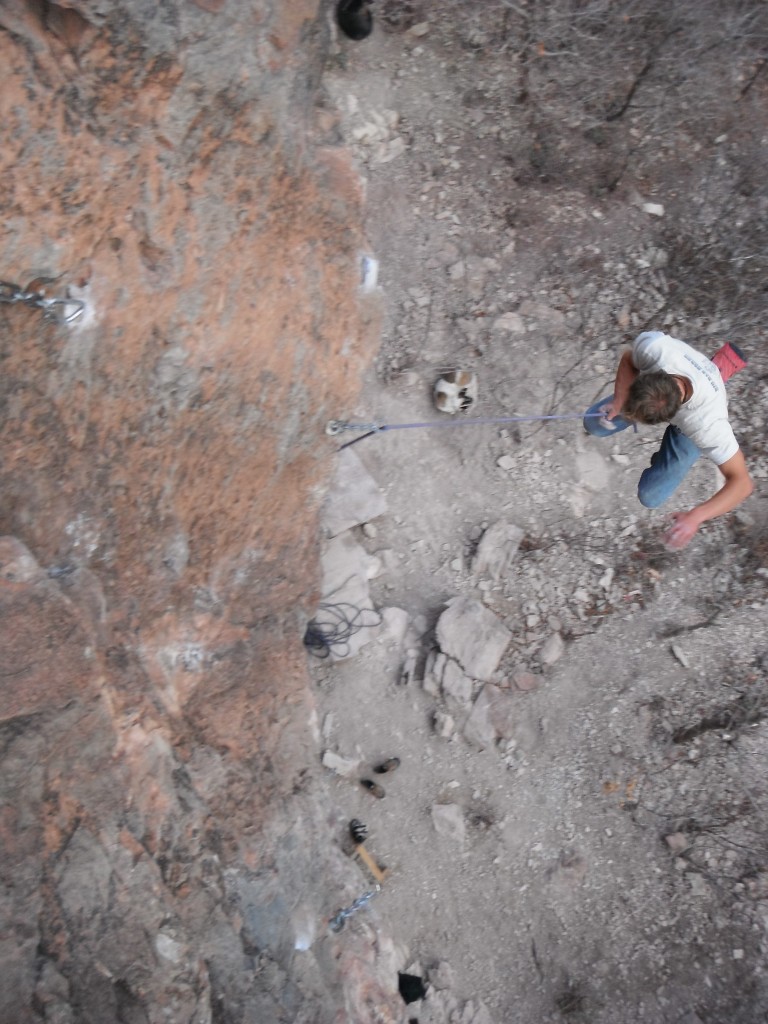 These days, I’ve learned not to try to create the sublime moments. After seven years of dedication, I’m still pretty bad at forcing them. Sometimes I climb rocks to share an experience with friends, and that is deeply satisfying. Mostly, these days, I’m more aware of my own powerlessness paddling on the deep currents, and by climbing rocks I get a glimpse of my real self, like catching a glace of my reflection on the calm surface of a lake as the wind ripples recede for a moment. For many of us, these breaks in the wind are the closest we get to self-knowledge.

Most days I let the currents of instinct take me where they will. The stakes are low enough, why strive so hard to choose? Sometimes self-preservation wins and I quit thirty minutes into a workout and sit on the couch and watch a Game of Thrones episode and eat a pint of ice cream. And I feel satiated, in that moment. Sometimes the exploratory, risk-taking urges win and I leave the snacks alone and bike through the sunset into the dusk without a plan, or do extra sets on an interval workout, or break ground in the garden with a pick axe, or leave the computer alone and write a letter to my grandmother with a pen. Sometimes I choose which path to take. But not often.

How much power does my logical brain actually have over my emotional, instinctual self? Every time I climb, my reflection in the vertical mirror forces me to deal with this question. How many times do I find that instead of trying to climb up the rock, I’m actually trying not to fall? No wonder the climb seems so hard. No wonder I fall.

When I think about my best climbs, they’re always the times when I was just an animal moving up stone. I focused my attention on holds, movement, and solutions. Send or sail, doesn’t matter—it’s the pure headspace that makes it memorable. On the best pitches I’m letting my intrepid, exploratory self do what it knows what to do—the “me” upstairs is just along for the ride. To enjoy. Perhaps to share the story with another mind, later.

The road turns to gravel at the Rifle Mountain Fish Hatchery and I ease my car up a narrowing canyon of limestone cliffs. I park under the shade of a cottonwood grove and walk up towards the crag to meet dear friends. The first saunters up in purple tights like a court jester, embraces me in a warm hug. The second emerges out of the forest from a nap, also clad in silly clothes. We walk up beneath the steep walls, tie into a rope, and try hard for no purpose other than the trying itself.

At a rest stance I scan the cliff above for holds. I try to read the sequence, and all I can tell is that it appears impossible. My grip is fatiguing. While searching for footholds I notice the bolt below me, and the self-preservation urge tugs with force. “You could just rest on that bolt,” it seems to say. “It’s safe.” The voice is so enticing. Of course it’s safe. This is why we practice hardship—this is why we look in the mirror—to gain the strength to resist that voice. To earn the ability to choose. This is, I believe, what they call consciousness.

I am still weak, but I have trained. I look up from the bolt to the wall above. The unknown. Nothing is certain, not even how I will use the first hold. The siren song of comfort-seeking instinct drags me downward. Soon I will be too heavy to climb. I remember my training, and I remember the bumper sticker. This, clearly, is an opportunity be silent for once. I focus on the edge above and my mind quiets, and then I notice something else: I’m curious about that edge, and the next, and how I might manage to reach between them both. Like prodding the embers of last night’s fire to life, I feel the exploration instinct stir deep within. With my attention focused on the sliver of limestone above my face, I shut up and let the curious animal climb up and seek what it wants to find.

Drew Thayer blogs at Carrots and Peanut Butter. He is a Senior Contributor to The Climbing Zine.