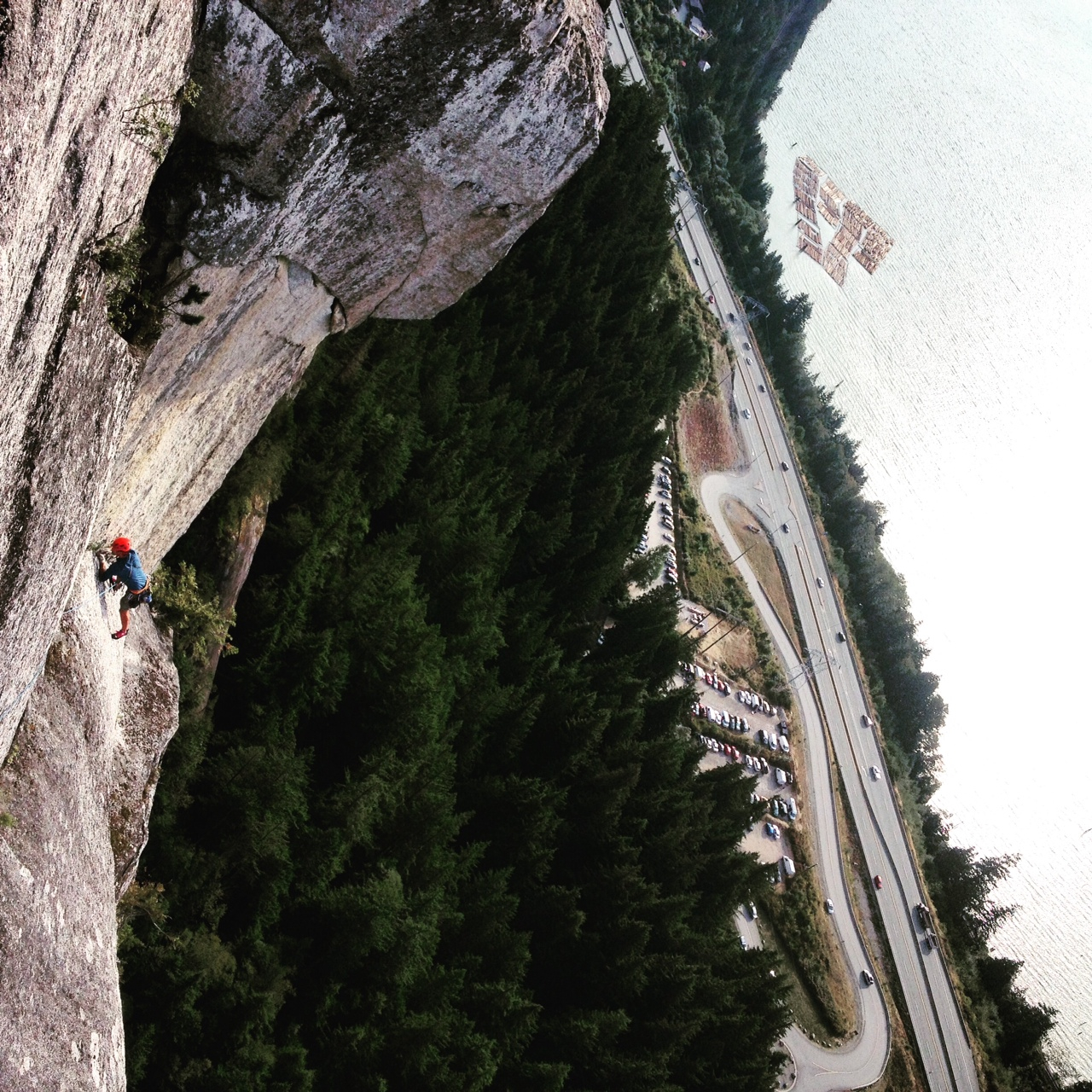 I’ve got a confession to make people: I haven’t seen “Straight Outta Compton” yet. Like many hip-hop fans I’ve been excited about this movie since the project was announced, but when it was released I was up north in the land of Drake, not Dr. Dre. That also means I was out of town for the Gold King mine accident here in Durango, and watched from afar as the rest of the world did; the wrath of the Old West still affecting us in these modern times. Thanks a lot Teddy Roosevelt. 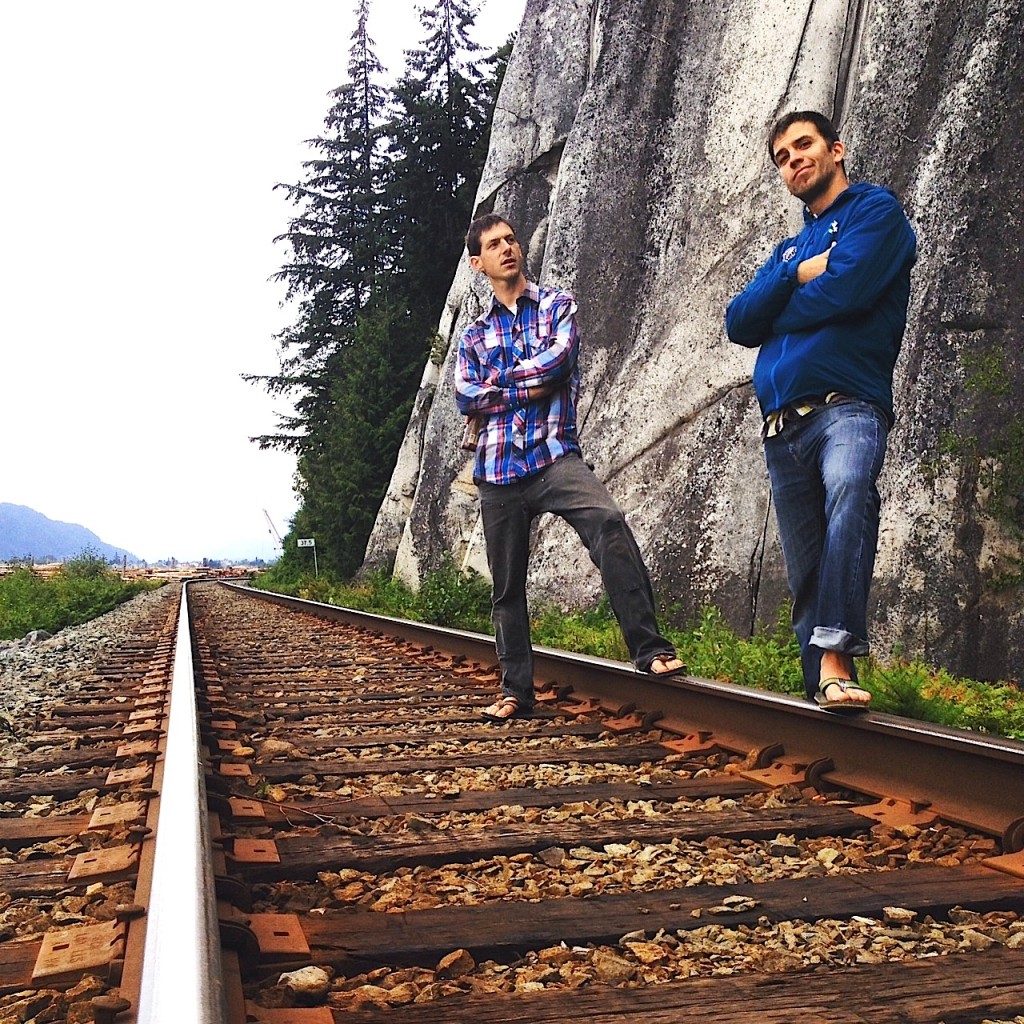 I can’t recall the last time I was this excited about a movie, something about hip-hop and the role that N.W.A. played in the development of the music, as well as bringing a larger awareness to what was happening in Compton, and other urban areas in the United States. Yes, N.W.A. kept it real before that was a phrase.

While the hip-hop fans of the United States were turning out by the millions to see “Straight Outta Compton” I was in Squamish, up in British Columbia, Canada, otherwise known as Squampton. I don’t really know where the name came from, Squamish is a far cry from Compton, and at this point I’m way too close to deadline to do any sort of research. Maybe the people of Squamish just are big hip-hop fans too. After all the night we arrived was at the end of a three day music festival, in which no other than Drake himself headlined, the Canada born star of the rap world at the moment.

I’d made a trip up to Squamish last summer, and after only three days got rained out, forcing us back down south to the States. We did some magnificent climbing on that trip in Washington and Idaho, but nothing was as good as Squamish. For the last year I was Squampton dreaming, and made sure my summer travels included a visit to our friendly neighbors up north.

That’s a good place to start with descriptions, there’s something about friendly people that is both welcoming and contagious. (Plus their accents are just so damn cute with their “ehs”, “abuuts”, and “soarries”, and their money: loonies and toonies, are you kidding me?) 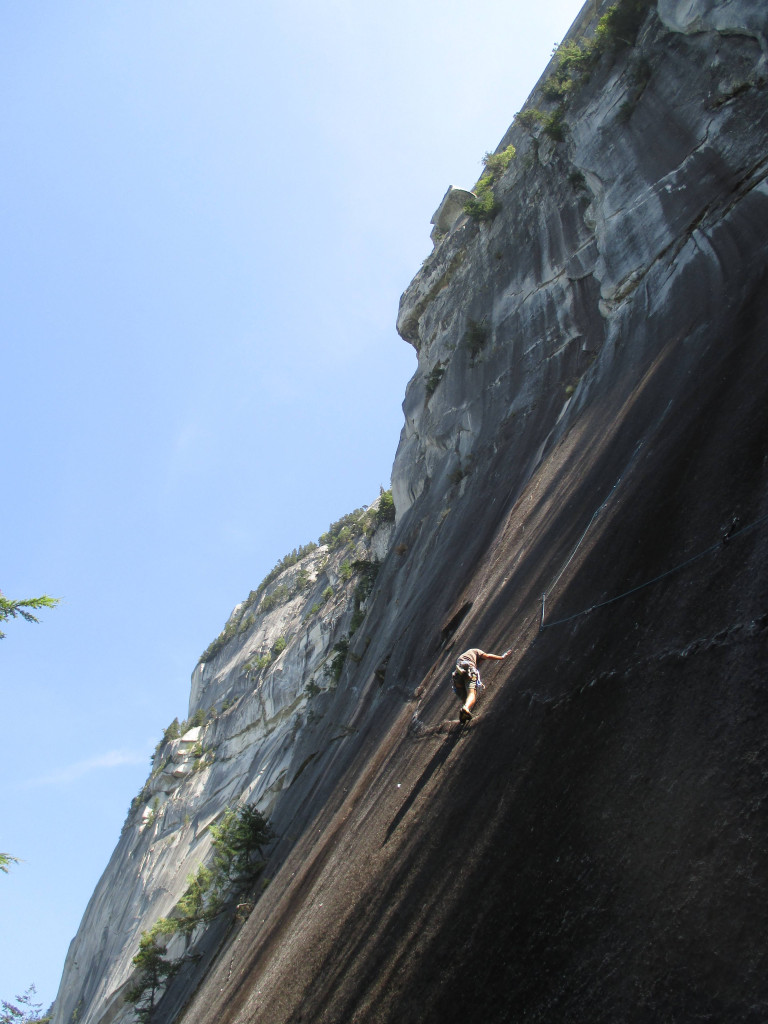 I can see why they are in such a good mood, for a brief stretch every summer the rain typically slows down and the place is basically a paradise. Seemingly every good looking woman across Canada descends upon Squamish, the temperatures never get too hot or too cold, there’s enough trails, mountains and rocks for everyone, and The Chief the massive granite buttress overlooks the Howe Sound, the ocean meeting granite cliffs that dominate the skyline. Blackberry bushes are everywhere and the salmon are plentiful and cheap, really cheap if you’re patient enough with a fishing pole (I’m not). Those few sentences are just the beginning of the beauty that unfolds, and to be a part of it is transformational to say the least.

Now I’m just a simple man with an average athletic prowess, but beautiful places like this stir a yearning and desire deep in my soul. All of the sudden I don’t fully appreciate my days unless I give a hundred percent effort into what I’m doing, and all I was there to do was climb. It’s a simple equation, but your desires must align with someone else’s, because climbing tall walls is a team sport. Luckily we assembled a small posse of Colorado climbers there in the campground and lived out our days on the walls.

To this dirtbag lifestyle, for me, there’s this constant boiling and simmering. The intense effort and fear coupled with the aftermath: hardcore chillin’. Each day in Squamish begins with a mellow start, one in a hundred climbers get up before 8:00 am and, and every day ends at the communal picnic tables, where there’s an international representation, people from all over the world getting together to cook simple meals and share drink and smoke.

With so many people living out in the open there’s bound to be problems, and the main issue in Squampton is theft. At least one car was stolen when we were there, a result of a big city, Vancouver, being so close. Though I imagine they would be polite if you caught them stealing your car. I did have one weird encounter there, while walking the streets one day I really had to go to the bathroom, and I spotted one at a nearby at a city park. I opened up the door to the men’s room, and what did I find but a woman, who was clearly using drugs; she had sores on her face and looked like a creeper. Without hesitation, she said, “Oh I’m so sorry, come on in.” I took one look at this chick, who was probably an extra in “Breaking Bad”, and ran away as quickly as I could. 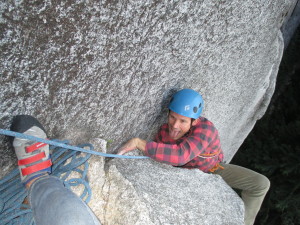 The climbing, the trails, the people, there was so much that was so sweet about Squamish, as sweet as the perfectly ripe blackberries that you can greedily eat without guilt because there’s more than enough for everyone, but I’m only given so many words here, so I gotta wrap it up with just one more Squampton bit.

We had one big party night, as one friend was arriving and another was set to leave. Somewhere in the midst of delicious sushi and drinks, we met some climbers and learned of a karaoke night at the local dive bar.

The karaoke DJ was an energetic short and stout woman who had bleached blonde hair and sang 1990s hits at the top of her lungs in between patrons taking their turns at hits from the good ol’ United States pop charts. It was the perfect mixture of talent and hilarity; everyone in the bar was having a great time.

I did my old standby of “You Can’t Touch This” by MC Hammer and as the drinks flowed and I got more and more buzzed I signed myself and my buddy Shaun up for “You Are So Beautiful” by Joe Cocker. At the last minute I realized we were going to be “those people” at karaoke, drunk and missing all the right notes. In a strange twist of fate we got up to the stage and they had “It Was A Good Day” by Ice Cube of N.W.A. fame queued up. Shaun and I both knew the words well, and we went into karaoke hero mode on the microphone. A good day indeed. 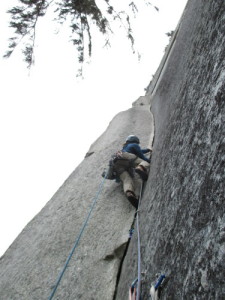 Thinking about that, I think it’s time to get out and go see “Straight Outta Compton” tonight, while it’s still in theaters.