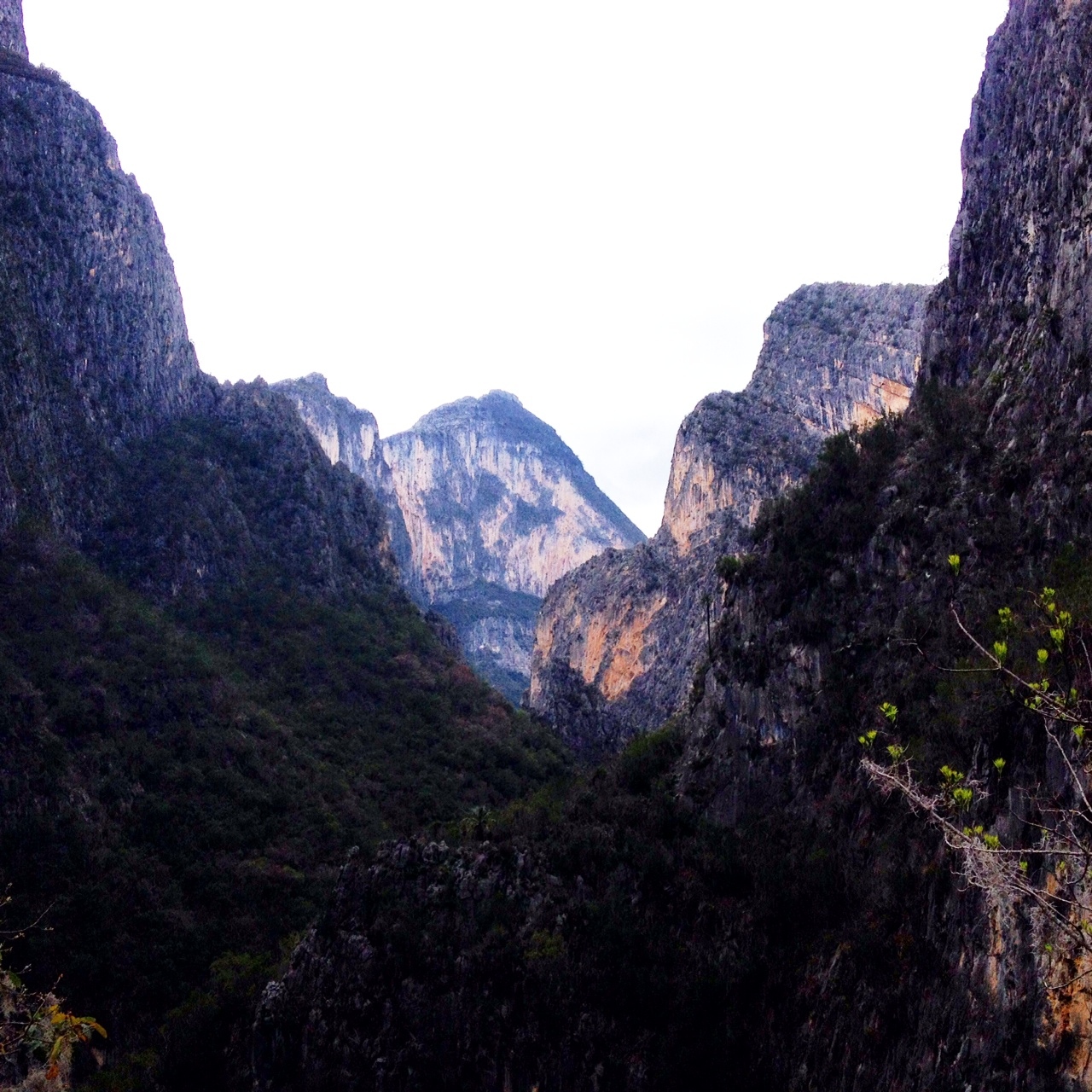 Again, this one starts with a crying baby. This time the baby is Isabella, and we’re deep in a wild Mexican canyon called El Salto, an hour from cell service, fifteen minutes from a village where people don’t even have landlines or interwebs. Paradise.

I’m watching her sleep, pondering her preciousness and the delicate nature of humanity, while Dad is a hundred feet off the ground, pinching onto a limestone tufa, perfectly positioned on the orange and grey wall, while Mom belays, tending the rope to her husband. 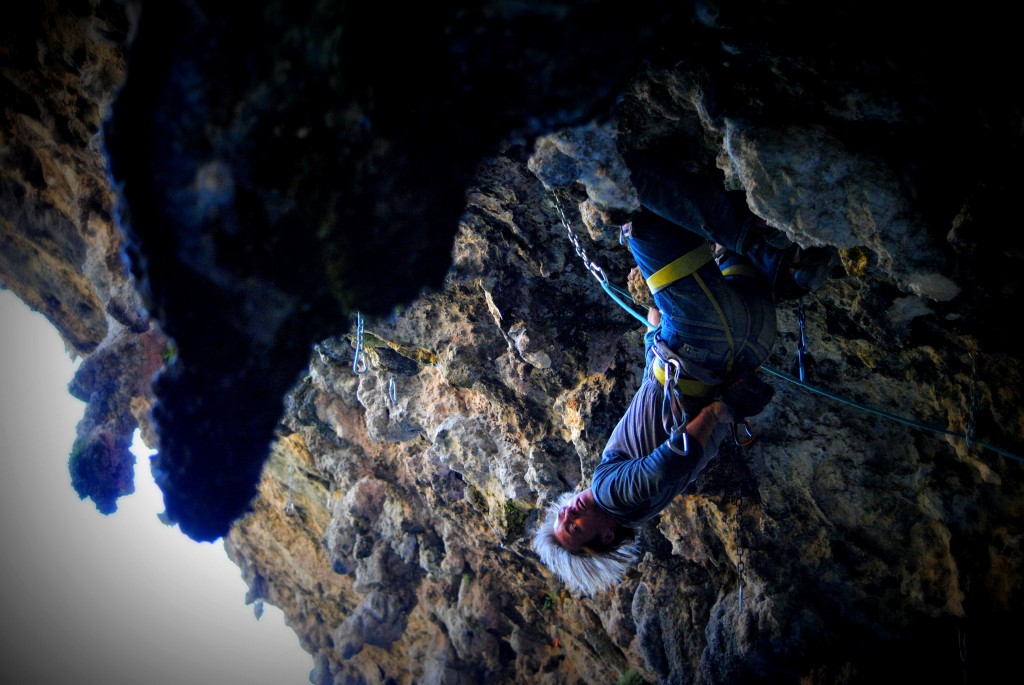 Mark Grundon climbs in the nearby Cumbia Cave, down the road from El Salto. Photo from the Mark Grundon Collection.

Then, the baby wakes up. Starts balling, “Mama, mama, mama….”

I pick her up awkwardly, and bring her closer to Mom. Dad finishes his route, and his lowered down. Mom takes him off belay, and gives the baby what it wants: milk. This routine was played out over and over again during a recent trip to the Monterrey region of Mexico; where my dear friends Mark and Norma live in the winter.

I write trip, because I don’t like the term vacation. I don’t like to vacate when I travel, I like to experience, to be fully present, to feel it, to be inspired and moved so I have something to write about when I return. The world can keep it’s fancy cruises and five star hotels, let me sleep in the dirt, and get sunburned and scraped by cactuses, and beaten down by the wild, in order to feel something more

But let me back up. The plane ride. Falling in love with words again. I love reading, and that’s the reason I’m a writer. All the truths are in books, and stories weave the fabric that is humanity. To have that opportunity myself to be on the creation end of storytelling is humbling; when someone tells me I’ve inspired them, it’s the ultimate form of payment.

I’m falling in love on the plane, with The Fault in Our Stars. I don’t read as much as I’d like because it’s difficult to carve out time to read in the day-to-day grind of life. I’ve had The Fault sitting on my bookshelf for nine months, and I guess I picked it up at the right time because the story immediately creates that feeling that good writing creates: confirming the notion that life is short and precious. Plus, I’m a sucker for prose and poetry, and The Fault has just a perfect dose of that while it tells the sad story of young cancer patients on death’s door.

In The Fault there’s this character, the young cancer stricken narrator refers to as “The Ball-less Wonder”. He’s a one-dimensional testicular cancer survivor who leads a support group that the narrator reluctantly attends throughout the book. Right away my thoughts lead to, ‘can you still have a sex drive without testicles?’ I mean sex is an important part of life, and I can’t imagine a life without sex drive.

“Hormones,” Mark starts with. Mark, himself is a testicular cancer survivor, who lost one of his testicles to cancer. “You have to take hormones if you lose both of your testicles.”

Mark was never quite sure if his boys could swim post surgery, and had some sperm frozen before the removing of his testicle in case he ever wanted to father a child. Turns out, as evidenced by Isabella being in the world, his boys could indeed swim, and he didn’t have to make a withdrawal from the sperm bank.

Mark got cancer in college, ten years ago, and to see him as a Dad and husband makes me really happy. We share a hunger and passion for climbing; a feeling that we’re always chasing, and for eight days he showed me the immense opportunities for climbing, mostly with the family along for the ride.

Our most memorable day of climbing was attempting a route called Lawton’s Route, further up the canyon in El Salto. It was just the boys this time; this was no place for babies. Our third companion was Joel, a Mexican dirtbag, fluent in English, a guy who is fighting for climbing access in another nearby canyon full of limestone and tufas. Monterrey is surrounded by limestone, with as much rock, maybe more than the Moab desert.

The Monterrey area has had a wet and cold winter, abnormal weather everyone said. Because of this we had to navigate a chilly, crystal blue small pool at the bottom of a cascading and winding waterfall. We debated for days how we were going to get our gear and ourselves across the pool, which ended up being about five feet deep. After a failed attempt for find a little raft at Wal-Mart, at the last minute Mark remembered his surfboards.

The plan works well, we ferry our packs across on the surfboards, and wade into the shoulders deep water. It’s chilly and wakes us up and gives us a feeling of adventure. After a half hour of those shenanigans and another twenty minutes of hiking we arrive at the base of Lawton’s Route.

Lawton’s Route is named for my closest friend that has ever died, Adam Lawton. He was a skier, climber, boater, runner, and biker who had an insatiable appetite for adventure. He was killed in an avalanche in 2012 and Mark decided to bolt this four-pitch route in his memory. Mark successfully climbed the route after bolting it, and for the last three years it has remained in obscurity. 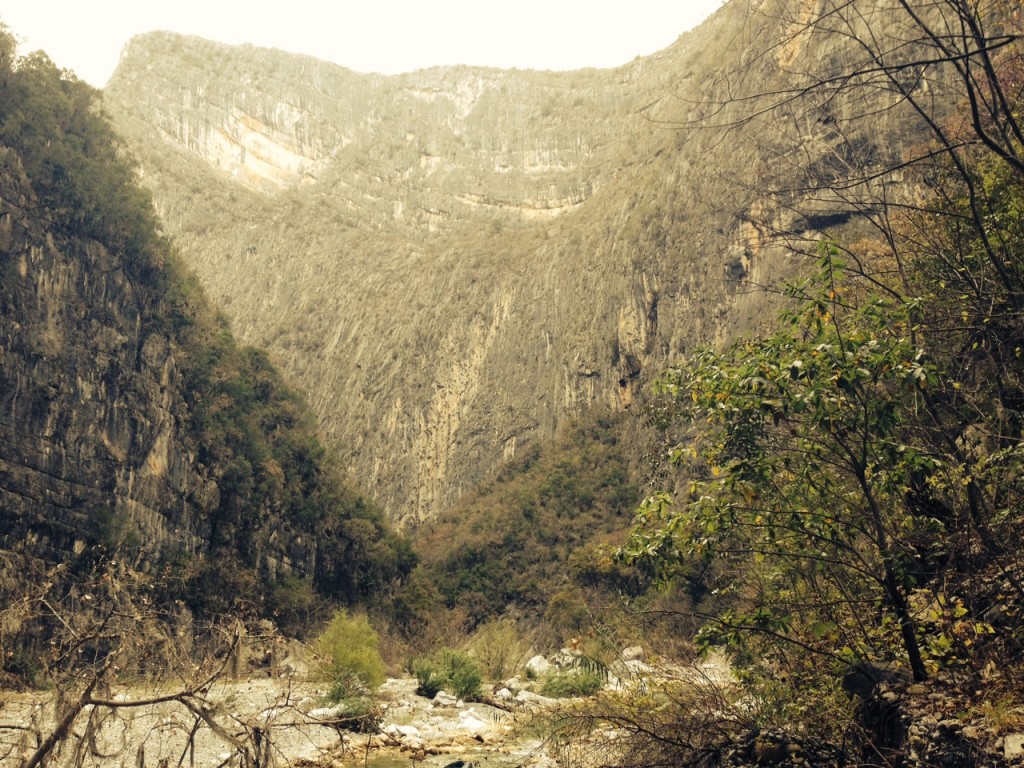 A small plaque scratched on a tiny limestone rock marks the start of the climb, and I get all nostalgic and teary-eyed thinking that deep in some Mexican canyon is a tribute for one of the finest human beings I ever knew. I can see his crooked, scheming smile in my mind.

Right after I smile because of his smile we hear nearby rockfall, and I’m quickly snapped back to the moment.

“Can I lead the crux pitch?” I begged my friends.

They quickly agree. Mark leads the first part, grunting and occasionally cursing his way up it. “Dammit Three Years Ago Mark,” he jokes. “You should have placed more bolts.”

When it’s my turn to follow the pitch, ten feet up I break off a hold and with rope stretch I fall about a foot from the ground. I also curse Three Years Ago Mark, but get back on the rock, and climb to the belay.

Then it’s my turn to lead the second crux pitch. I pause briefly to take stock of my surroundings: palm trees grow from the rock, millions of cactuses do too, the river weaves drunkenly through the canyon, and behind us is an unclimbed thousand foot wall, with a massive orange overhang, over the overhang is hundreds of feet of gray rock, soaring to the sky. It’s like a Mexican limestone virgin version of Yosemite.

Fifty feet up I’m scared, again cursing Three Years Ago Mark, yelling explicatives to the rock. I try to channel Adam’s spirit. Nothing. I think of Tommy Caldwell, the Dawn Wall hero, whom I share the exact same stats: 36 years old, 5”9, 150 pounds, lives in Colorado. Nothing. For every Caldwell there are ten thousand Mehalls: everyday climbers all too in tune with their lack of courage.

I hang on bolts, and finally, not gracefully, get to the next belay, painfully aware of my fragility; but somehow none of the mistakes and cursing adds up to any sort of shame or failure. Climbing is a Zen sport, not a sport where we keep score.

The canyon is still beautiful; shortly I’ll be joined at this perch by one old friend, and one new friend. And, then again, I smile, and take stock of my surroundings.