Fear and The College Try (in the Black Canyon) 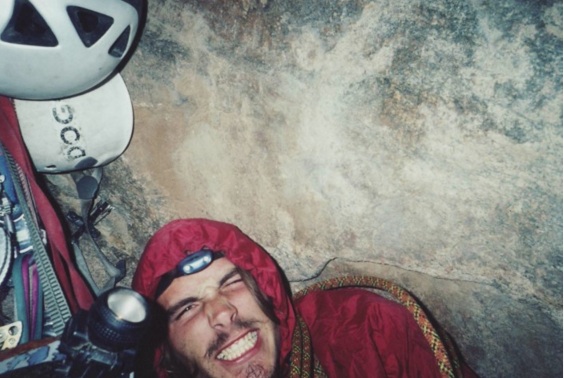 When my college crew began climbing in the Black Canyon, topos were scribbled out on beer soaked napkins, during big nights at the Alamo bar in Gunnison. Well, on at least one night they were.

by Luke Mehall, publisher of The Climbing Zine and author of American Climber. This piece is an excerpt from the new guidebook to The Black Canyon, titled, “The Black” by Vic Zeilman.

We started climbing in The Black in the early 2000s, just before the Robbie Williams guidebook came out, and it was Williams himself who wrote out that napkin topo that led to my friends’ benightment on their very first route – three grown men resorted to spooning on a cold dark autumn night. I wonder how they settled on who would get to be middle spoon?

Recalling my own list of mistakes and failures, which includes a couple unplanned bivouacs on those crazy walls, the experiences seem distant and surreal, like they happened in another lifetime; like I’m trying to recall when I was born, or recounting my first psychedelic experience.

In those early days, coming of age in life and climbing in Gunnison, Colorado, the memories are like those of a love affair. We were truly in love with climbing, doing everything for love, and never for money. Dirtbags could be written off by society for being smelly, dirty and irresponsible; in reality we are just too in love with the climbing experience to notice routine details of life.

Like the psychedelic experience, a certain mind state must be kept to enter the depths of the Black Canyon, and if you can keep your calm and carry on, like Winston Churchill said, the rewards are deep and vast. Bite off more than you can chew, and this place might send you away, forever. Starting humble and small is sage advice for an aspiring Black Canyon aficionado. The canyon makes us all feel humble and small sooner or later.

My old friend Brent Armstrong was the first Black Canyon climber I knew, and his intensity and possible insanity matched the character of the chasm. He was one of the original climbers who did the Hallucinogen Wall in a push, and in 2001 during spring break, while his homies were all off in Indian Creek or other warm locales, he soloed a new route called White Devil over a total of nine days. Years later during an interview Armstrong recounted a meltdown a week or so into the climb, pushed to the point of tears, when Dr. Dre’s Chronic 2001 album on his Discman brought him back to reality, and gave him the confidence to send and push on to the top. The doctor would have been proud.

Like a true friend Brent believed in me, and told me I could do anything I wanted in climbing. Problem was I didn’t believe that. However, there were breakthroughs. Shit, the simple act of descending a poison ivy filled gully by headlamp and spending all day clawing up a pegmatite layered wall only to top out in the dark is a breakthrough for the modern climber.

The Black Canyon taught me to be humble, and it taught me that I would never be more than a 5.10 climber. While I have climbed harder than 5.10 elsewhere, a true measure of what you can climb is circumstantial. Dehydration, fatigue, and fear are ingredients to every climb in The Black, and how you can perform under those stresses define whether you will be successful there or not. Can you climb 5.10 when your last piece of year is twenty feet down, or when there’s no gear at all? Or when the next section involves navigating a peg band filled with prickly bushes? Or when you haven’t slept for the last 36 hours?

Success in The Black always came in the form of an enhanced state of mind. Often, we would make mistakes and our ascents would be much slower than we envisioned, occasionally leading to the dreaded benightment and obligatory spooning if there was enough room. Running out of food and water pushes a man to the brink, and it also leads to a greater appreciation for the simple things. After surviving a long battle in The Black the water (and beer) have never tasted so good, the sky has never seemed so blue, and the brotherhood of rope has never seemed so real.

I could probably wax poetically for thousands of more words on this unique canyon, but The Black is a place to be felt, not to be eulogized. It is a treasure we share, a place that could never be owned, or be conquered by man, and in modern times we need a place like this more than ever. A place to make you feel proud, like Armstrong penned in the original Williams guidebook, “Even if it is just the product of a hallucinogen (wall that is)”.

“The Black” by Vic Zeilman  (via Kevin Daniels publishing)