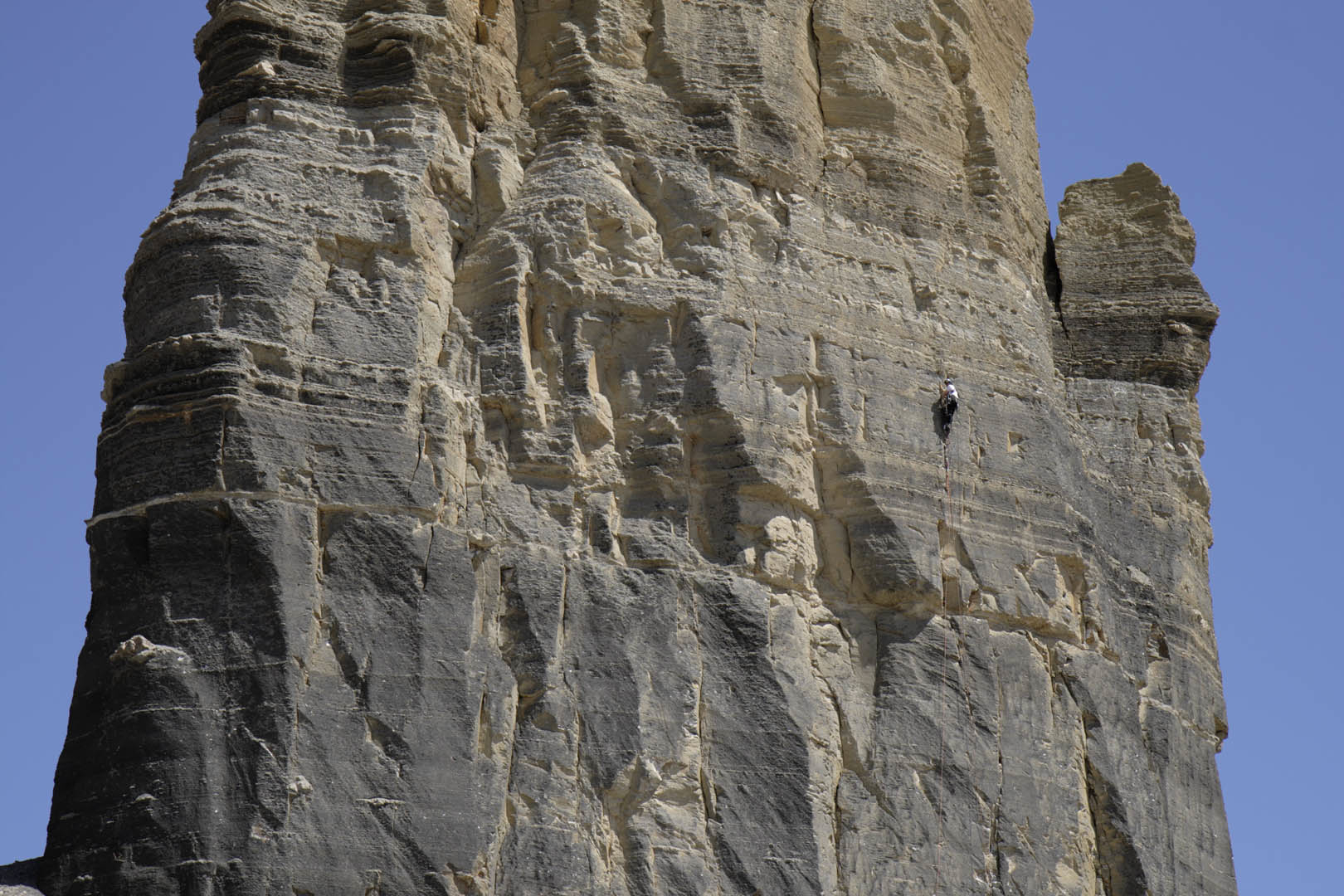 I’d been driving past this rock, near Hanksville, for years. It’s just begging to be climbed but looked impossible without drilling a ladder of large holes for spikes (rebar? footing stakes?) of some kind. And what kind of fun is that? The “rock” appeared to be too soft to nail, too crumbly to bolt. There were traces of seams, but each led into blank shields of rotten sugar. Perhaps this was the ultimate choss formation: unclimbable by any means. An untidy frustration at the back of my mind, that damn thing is right by the highway, flaunting itself.

by Steve “Crusher” Bartlett (This full story is published in The Climbing Zine Book.)

In early 2008, my annual reconnaissance, to laugh at this ridiculous tower, was different. I’m not sure what had changed, but a crack system on the south face now appeared feasible. In late May, Chip Wilson and I got started.

The climbing involved a glorious mix of pitons, cams, nuts, the whole gamut of climbing paraphernalia and choss-aid complexity. We made one hundred feet in two days, fixed ropes, left. The next weekend was ninety-five degrees in the shade, of which there was none. We climbed this in three pitches, though for each, the belayer stayed on the ground to avoid the awkward and dubious hanging belays. The last pitch was a doozy, starting with tipped-out #5 Camalots under a temporary-feeling flake roof. The crack quickly turned to dust, twigs, and dead insects, so I started nailing Toucans (large hook-shaped blade pitons) into a calcite seam in the flake, hoping that the whole thing, trembling with the hammer blows, would not fall off with me under it. Above, “Mudstrosity-style” pitons forced alongside brittle seams led to the summit.

Except this was no Mudstrosity summit. There was no rock! Instead, thin grasses grew out of a layer of dusty soil that would never hold an anchor. A foot down were shards of shale, which, once disturbed, had no cohesiveness. There was no solid rock at all! I pondered pulling up a rope and rappelling the backside, using Chip’s weight as an anchor. But the summit was over two hundred feet up, so two sixty-metre ropes would not make it up and down. Besides, retrieving the rope by pulling it across the top would never work; the rope would dig into the choss and jam. It was getting late, and I was stumped. Would I have to bivy on top? Call for a rescue? Or laboriously down-aid the final pitch and then send Chip up and down, cleaning as he down-aided? 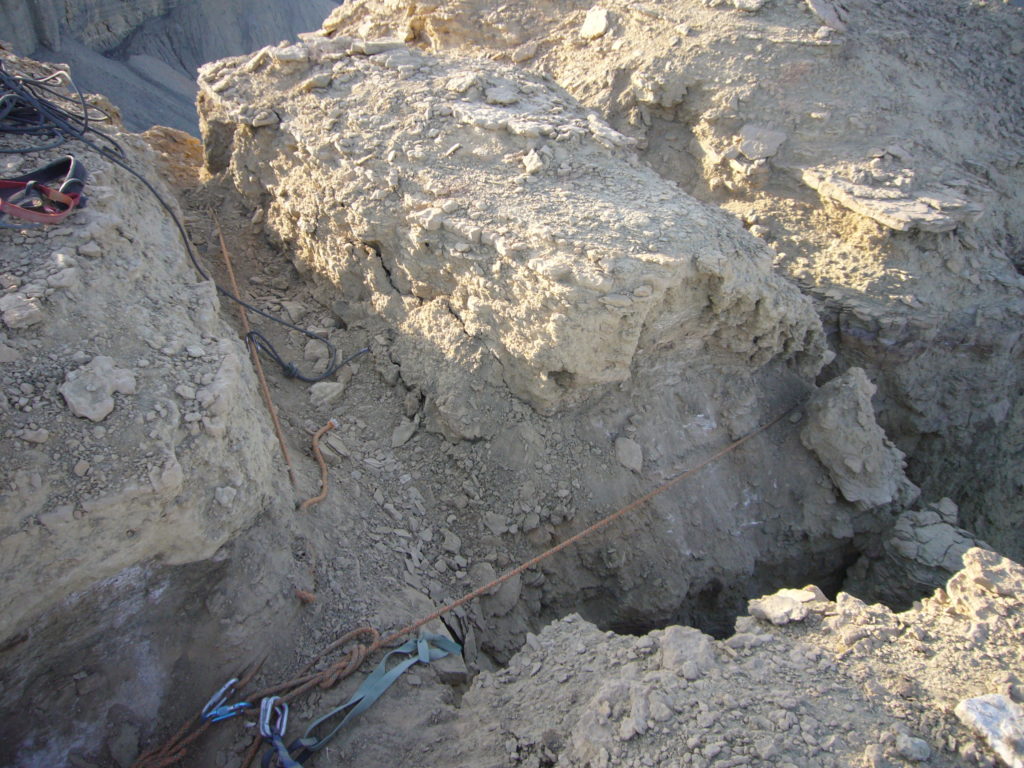 Getting creative on the summit of Sugar Daddy. Photo: Steve “Crusher” Bartlett

The answer was an ice-climbing-style bollard anchor. Two parallel grooves three feet apart crossed the summit, and six feet back from the edge, another crossed these. I deepened these and created a coffin-size bollard, surrounded by a foot-deep trench in which I laid thirty feet of rope. With enough tension, this rope would surely pull right through the soft silt of the bollard, but one person’s bodyweight would not generate that much tension—or so I hoped. I untied from the anchor and watched nervously as Chip jumared and the rope bit deep into the pastry. He arrived on top with a big smile, trusting my judgment more than I did. 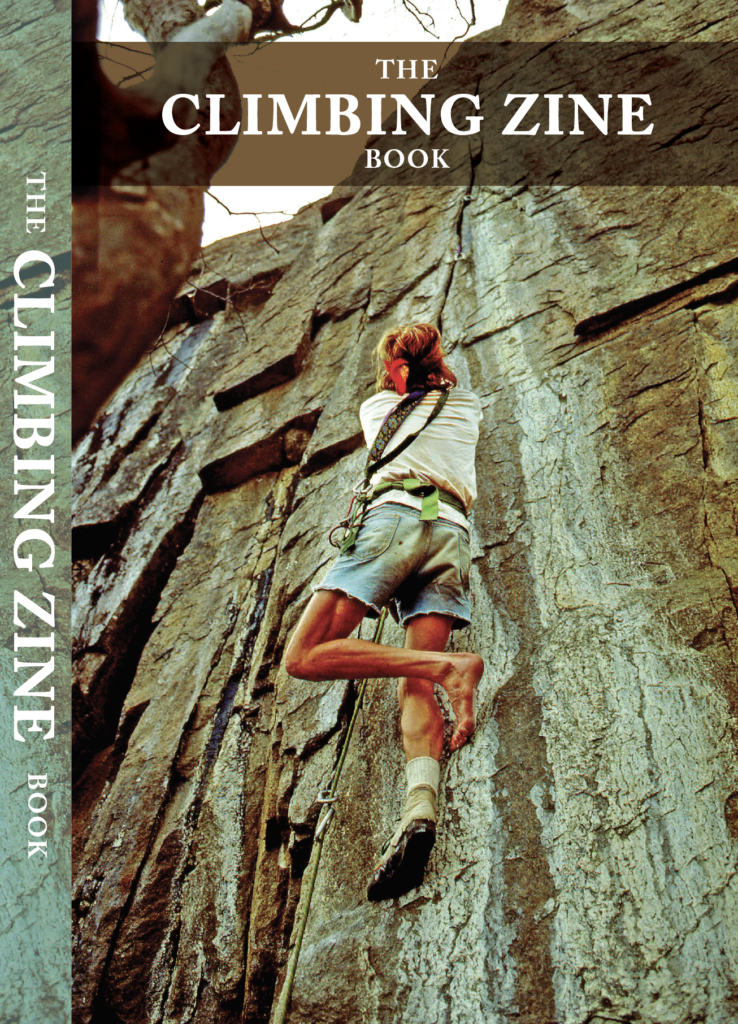