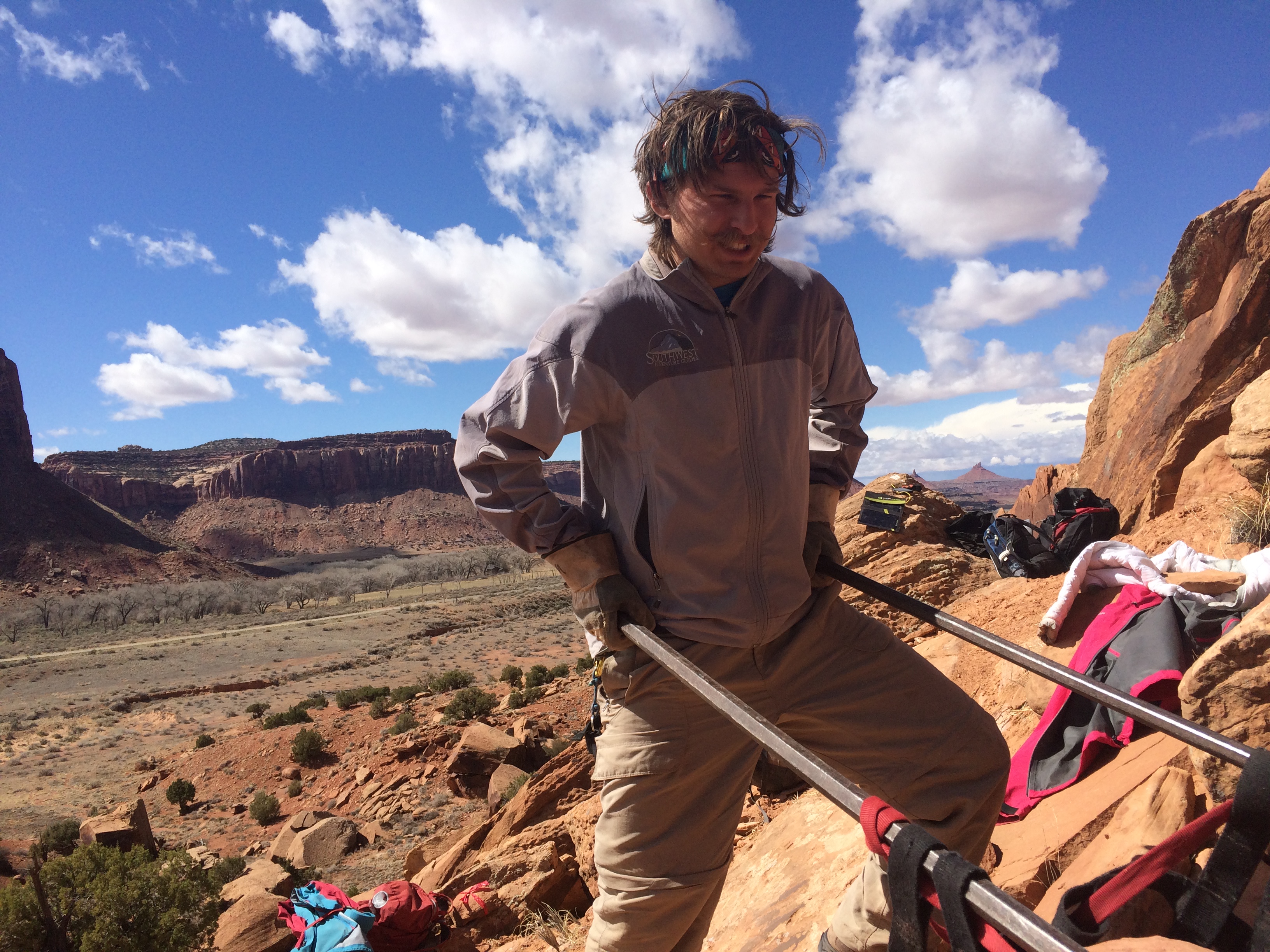 “I’m glad Royal Robbins isn’t here to see this shit show,” I said to myself as I watched the youngsters on Yosemite’s Nutcracker defy death by way of ego and inexperience on his 1960s classic.

It was one of those experiences in climbing where I try to turn off my emotions and deal with things in a matter-of-fact way, thinking a rescue or body recovery might be right around the corner.

by Luke Mehall, publisher of The Zine, author of The Desert and American Climber

The duo was a young man and woman. They had reached the same perch as us, a party of three, a couple pitches up. The girl was late for work, and as soon as she arrived to the ledge, she started freaking out and hopped on her cell phone to call in and talk to her boss. The guy had built an inadequate anchor of two pieces, and both of them looked poorly placed.

The whole situation was an accident waiting to happen. My patience was wearing thin. They wanted to pass us, and the dude blatantly told us, “We’re going to be faster than you.”

I felt sorry for the girl, and it makes me cringe when I think how often this scenario plays out on crowded moderate routes across the United States. I wanted to kick the dude’s ass for putting himself and the girl in this situation, and I wanted to tell the girl to run away from him and avoid any sort of guy who lacks respect for this high-stakes game we call climbing.

But, of course, she couldn’t run away; she was stuck in the vertical with this jackass.

Earlier in the morning—we were getting an alpine start to try to avoid the crowds—another duo walked up to us and noticed we were racking up; and apparently our rack looked bigger than the person thought it should have. “What, are you going to climb El Cap?” the bro with a GoPro attached to his helmet said sarcastically.

“No, we’re going to climb Nutcracker,” we plainly stated.

“Are you going for the speed record on Nutcracker and recording it on your GoPro?” is what I wished I would have said, but instead I just sat there dumbfounded. I’m not a morning person, and I had no quick comeback.

We were the first party on Nutcracker, and the GoPro Bro ended up on After Six, which he surely set the speed record for and then posted the footage on YouTube. All day long on the climb, we came up with comebacks we wished we would have said, like that Seinfeld episode where George Costanza comes up with, “Well, the jerk store called, and they’re running out of you.”

“Did you say that?” Jerry asked George.

“No…” he replied dejectedly.

That day, we thought our lack of a good comeback was what was missing, but now, years later, when I think of both of those bros and that poor girl, what was missing was respect.

The modern climbing world, not unlike the greater world, has some serious issues to address. Climbing gyms have created an unsustainable population of uneducated climbers who test themselves on the rock with great abandon. I know—I was once one of them. I fell in love with climbing in a gym in Illinois in 1999. Luckily, I found mentors and literature that taught me to implement respect in climbing.

Since that day on Nutcracker, I made a vow to myself to avoid crowded moderate routes. It left a bad taste in my mouth, and I also have the luxury to make that decision. I live in a relatively rural place, with plenty of rock and not a ton of climbers. Many don’t have this luxury—I’m very aware of this.

The plan has mostly worked, though I know it does nothing to help solve the issue. Also, luckily, I’ve had more positive experiences to counteract what I felt that day on the Nutcracker.

Last spring, there was a big trail rebuild at the Scarface crag in Indian Creek. Spearheaded by the Access Fund, Rocky Mountain Field Institute, and Front Range Climbing Stewards, I decided to lend a helping hand for a couple days; after all, it’s the least I could do. I’ll never be able to give back enough to The Creek, a place that has given me so much, but at least I could do a little. A journey of a thousand miles, you know, it begins with a step.

Like many climbers, I have that angsty nature to “need” to climb, and the nature of trail work is slow and methodical. Luckily, you can still get a workout hauling rocks around, and that’s where I found my role. The second day, moving rocks with my good friend and trail-building master Tim Foulkes, we met this young climber named Johnny.

Johnny had a mustache, but don’t hold that against him. As we chatted with Johnny, we learned that he was on his spring break from college. There was another group from Colorado College that was helping out with the work, students earning credit for service, and naturally I assumed Johnny was doing the same thing. “No, I’m just here because I wanted to help.”

I was pretty blown away by that. I know in my college days every minute of spring break was spent in the pursuit of climbing. It was heartwarming to know there are young climbers out there as dignified as this young man—even if he had a goofy mustache.

Climbing is only getting more popular. Fortunately, so is climbing activism. From the recent Climb The Hill event organized by the American Alpine Club and the Access Fund in Washington, DC, to a simple trail rebuild, as a community, we are certainly stepping up our game and becoming engaged. The fight for Bears Ears National Monument is another great example.

I learned something from both of these experiences. Reflecting on the first situation, I just wished I could spend an hour or so talking with the young climbers, encouraging them to learn the basics before venturing off the deck. I wished I could tell the young girl to stay away from the hyperegotistical young males—to learn to judge the difference between badass and dumbass. I wish I could tell people to stop GoPro-ing so many things that simply don’t need to be GoPro’d.

And, I feel lucky whenever I come across young climbers who are more mature than I was at their age, the ones who seem to have learned from mentors and/or climbing literature that respect is a key element in the foundation for a successful climbing career.

NOTE: this piece was originally published in this month’s Utah Adventure Journal.

Luke Mehall is the publisher of The Climbing Zine and the author of five books including American Climber and The Desert.

Dig the words? Keep the dream alive by subscribing to The Climbing Zine. It’s $24.99 a year for three issues, and $39.99 for two years (six issues) $59.99 for three years (nine issues) and $99.99 for five years (fifteen issues). We run new specials every week with freebies, so be sure to check out our store for the latest beta.

Cabin Fever and the Dawn Wall by Luke Mehall
January 21, 2022