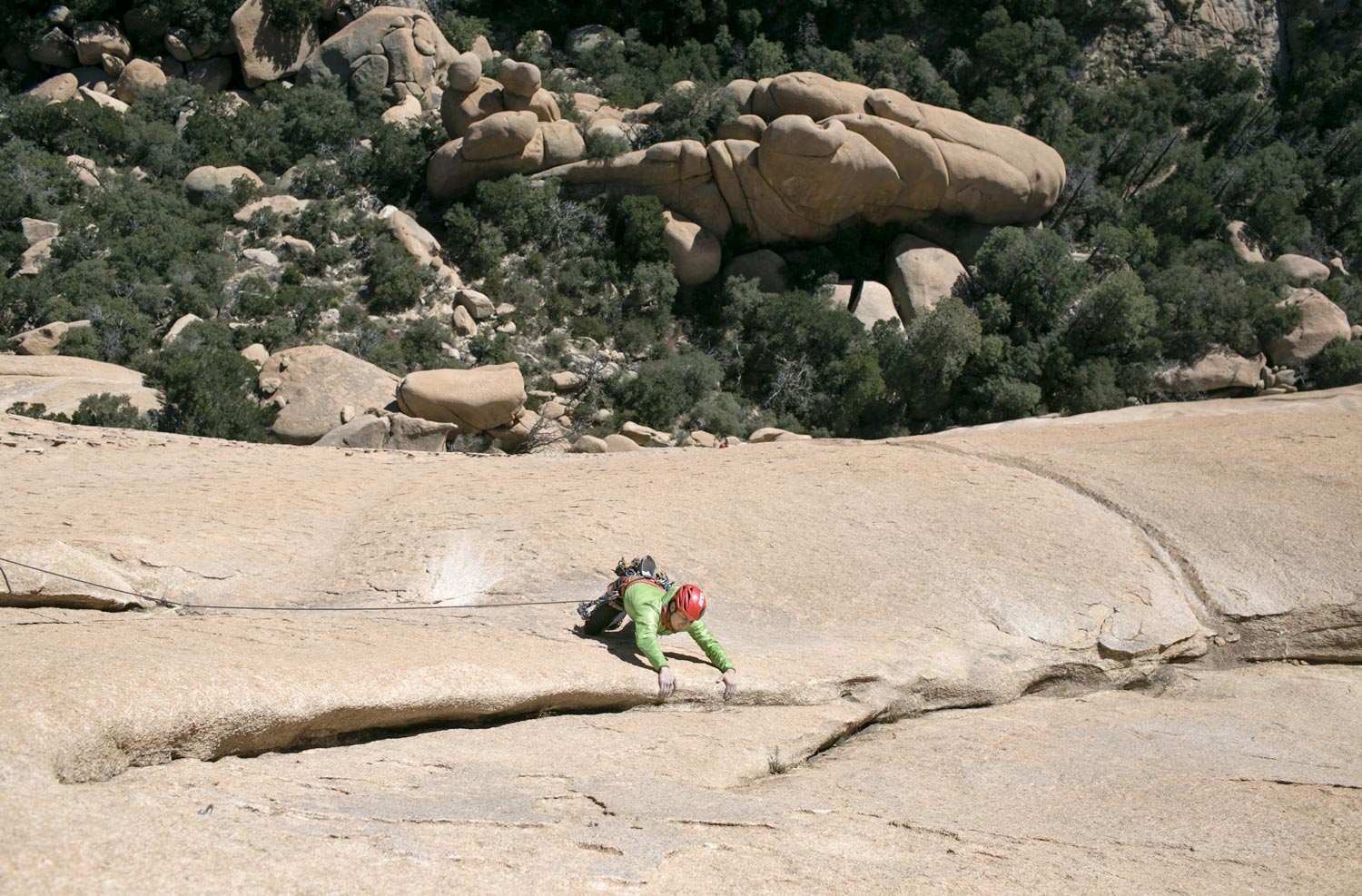 Acknowledging the roots and conceptualizations of the outdoor activities that we so passionately pursue enriches our participation and ties us to the land, as well as to one another. When we view our industry through a historical lens, we inevitably hear about John Muir, Sir Edmund Hillary, Royal Robbins, and other giants of outdoor recreation. We revere them based on their successes and physical accomplishments.

by Aaron Mike, published in the new Zine, Volume 18, now available. Banner photo of the author on the final pitch of What’s My Line, Cochise Stronghold in Chiricahua Apache homelands. Photo: Gabriel Ellison-Scowcroft

There is one similarity between them that is rarely mentioned: the entirety of their recreational pursuits took place on ancestral homelands of indigenous peoples. The Miwok and Paiute resided amongst the majestic granite walls of what is now Yosemite National Park. The Havasupai and Hualapai cultivated the areas of the Grand Canyon. The Shoshone, Bannock, Blackfoot, Crow, Flathead, Gros Ventre, and the Nez Perce tribes inhabited what is now Grand Teton National Park. The history and heritage of indigenous peoples as an inherent part of the lands on which we recreate is a topic that must be part of the conversation if we are to achieve a responsible, sustainable, and inclusive industry. Especially today, this topic is paramount not only because it enhances the care and stewardship of the lands we all love but also because it is a statement against the systematic dehumanization of a people.

Diné Bahane’, the Navajo creation story, tells of the journey through three worlds to the fourth world, where the Navajo people now reside. The story details chaos and drama as the Diné, or “holy people,” moved through Black World, which contained no light; Blue World, which contained light; and Yellow World, which contained great rivers. Eventually, in the fourth world, White World, the Diné would assume human form after gaining greater intelligence and awareness. Through these worlds, deities, vegetation, and animals accompanied the Diné, as well as our four sacred mountains: Sis Naajini (Blanca Peak), Tsoodził (Mount Taylor), Dook’o’oosłid (the San Francisco Peaks), and Dibé Nitsaa (Mount Hesperus). 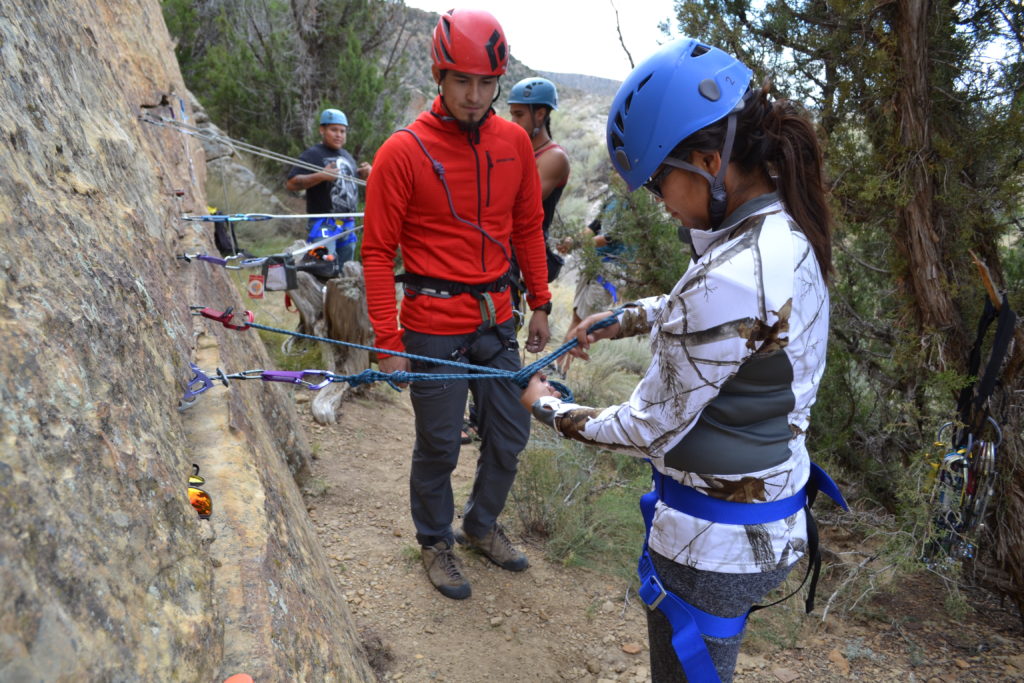 Aaron Mike, is the owner of Pangaea Mountain Guides. PMG is inspired to instruct indigenous youth not only in safe rock-climbing practices but also using the activity as a means of connecting to cultural identity. Photo: Aaron Mike Collection

Like the story of my people, my tribe, I have gone through many different worlds to walk the path that I am on today. My first world, Ni’hodiłhił, consisted of a surreal state of constantly spending time in the outdoors on the Navajo Nation from Sanders to Monument Valley, Arizona, as well as my hometown of Gallup, New Mexico. Weekends and summers were spent playing with my cousins through the tranquility provided, or turbulence imposed, by our Mother Nature. My grandparents taught me about sheepherding with blue heelers, building hogáns, and butchering sheep. I learned how to take care of horses and cattle and how to live off of the land. During the spring and summer, I spent nights sleeping under the stars and a Pendleton blanket in the back of my grandfather’s early 1990s Ford F-150. During the fall and winter, I woke up sweating under a sheep woolskin blanket next to a wood-burning stove that my grandfather had installed.

I blinked my eyes, and I was in the second world of my journey, Ni’hodootł’izh, far from the Navajo Nation, in the Northwest, transported to an environment where all of those activities that had made me feel so real were not customary or necessary and were even frowned upon. Due to my Diné heritage and my personality, being in the outdoors is a necessity. It is hardwired into my entire being. In this second world, the connection to the land that I had experienced and loved was diverted and diminished. I began to feel disconnected from my Diné roots and felt a growing spiritual void.

I awoke for my first day in a new desert environment and into my third world, Ni’haltsoh. By this time, high school, my identity was in constant flux. I struggled to find my place and individual path in a sea of foreign values and ambitions. I blew through various sports, political ideas, social scenes, and academic areas of study. Amidst the chaos of these years, I found a vehicle that would take me into my fourth world, rock climbing. Being on the walls and boulders in Yosemite National Park, Rocky Mountain National Park, the eastern Sierra Nevada, Cochise Stronghold, Hueco Tanks State Park, and Mount Lemmon with people that shared similar values brought me back to a feeling of connection. Rock climbing became my missing identity puzzle piece—a reincarnation of my first world. 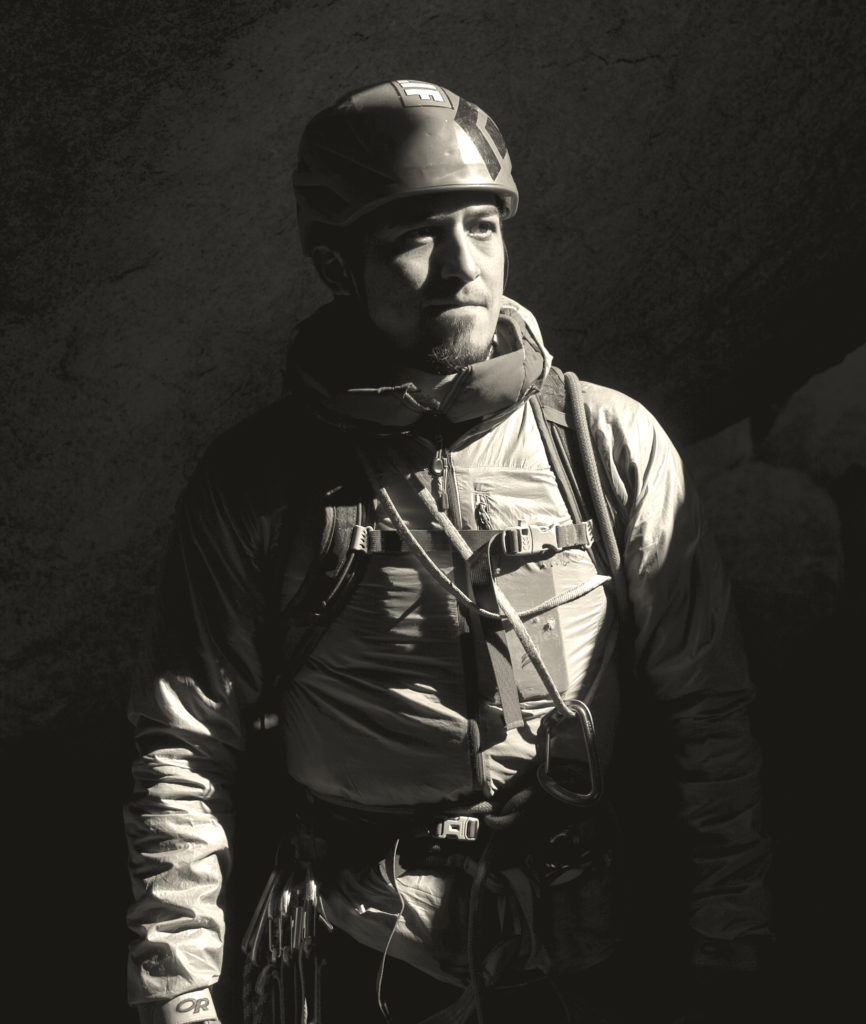 Aaron Mike, catches a glimpse of light through the shelter-providing boulders that once served as protection for the Chiricahua Apache in Cochise Stronghold, Arizona. Photo by Gabriel Ellison-Scowcroft

Ni’halgai, the fourth world of my journey: I am Tábaahá, the Edgewater clan, born for Tł’ógí, the Zia clan. My maternal grandfather is Táchii’nii and paternal grandfather is Tódích’íi’nii. After sixteen years of redpoints, boulders, summits, alpine ascents, and first ascents, I am an indigenous rock-climbing guide, guide-company owner, professional rock-climbing athlete, and advocate for the protection of sacred-land resources. My fourth world came about after I resolved that I am committed to the path I am on and that I do not want my story to be unique. It is my goal to provide the same access that was gifted to me to indigenous youth as a means of connection to their land and to their heritage.

Simply acknowledging indigenous heritage and history as a part of the land is not the only answer. It is a step in our First World, eventually leading to our Fourth World of evolution. Accountability is not only assumed with the people and organizations in the industry that are trying to make a sustainable difference, but should be carried out through the actions of each and every climber. Throughout the decades and in my personal experience, there has been a culture in climbing that tries to nullify existing law on sacred lands, specifically on the Navajo Nation. Climbers drill fresh bolts and pay to poach sacred formations behind excuses like “good intentions” or “having a Native friend.” These illegal actions are a modern-day conquer-and-destroy mentality that fails to respect indigenous sovereignty and deteriorates the credibility of potential sustainable rock-climbing efforts.

Indigenous peoples are not extinct. Not everything needs to be climbed. Recreation must take a back seat to respecting indigenous practices that have existed for millennia. Media channels promote first ascents, first free ascents, first descents, and sending of beautiful lines in remote places on rock, snow, or water, which can overlook indigenous values. The actions that we take must respect indigenous culture, and it is up to us as the greater climbing community to decide the direction that we wish to pursue. Like climbers’ push for leave-no-trace implementation and education, it is up to all of us to push our local climbing organizations to provide information on how to recreate with respect on or near sacred lands and to develop relationships with local tribes. We must shift the ethos from a western “take” culture in order to not only respect the original stewards of the land, but to ensure that Nahasdzáán, the Earth, will be healthy for our future generations.

The Giving Bolt, An Ode To The Bolt by Jimmy Keithley
December 5, 2022

Echoes of Expansion: Taking Our Gear for a Walk in the North Cascades by Katie Griffith
December 3, 2022