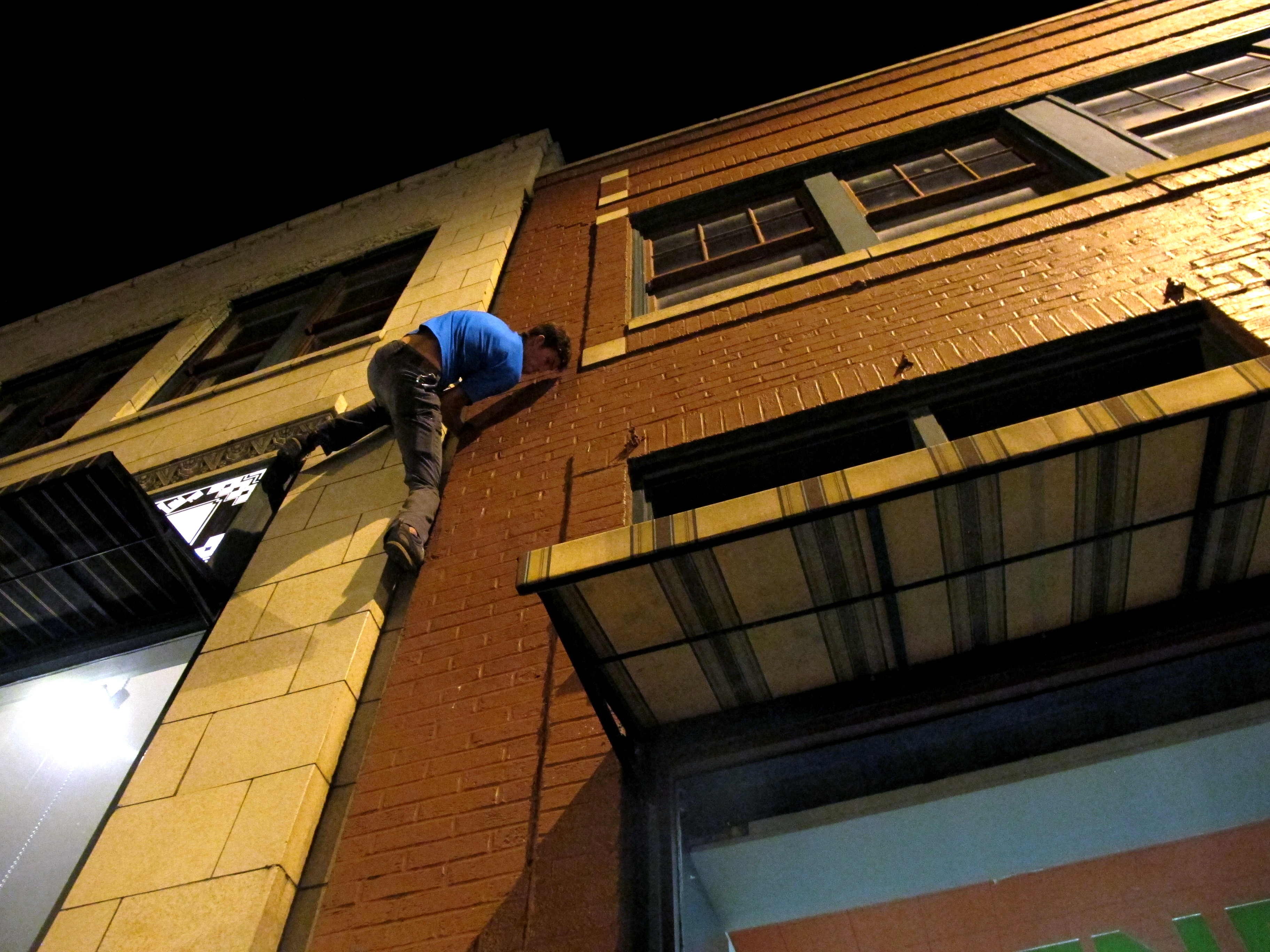 I could see him clearly from directly across the alleyway. A light was on and a white balding office worker was clearly burning the midnight oil at his desktop computer against the window. His face was clear as day no more than 30 feet away from mine. Should he, for any reason, even glance over his computer screen we were caught.

All it would take was a moments falter in concentration and he would see Corbin, topping out of the 15 foot layback crack, chimneying his way up another two stories, and disappearing into the busted out second story window of the abandon building I was perched in. Glass crunched under my feet as I stood up to pull him into the dark.

We moved quickly and purposefully through what seemed to be a bombed out apartment building. Through the few windows that were not boarded up, street lights cast blurred and broken clues to where we should go. Each step we took was loud and clumsy from all the debris. Squeezing past upturned couches and copper stripped walls, we found a narrow hallway that took us into the pitch black stairwell. We turned on our headlamps knowing -or hoping rather- that we were deep enough that their light couldn’t betray us and escape out into the street.

After about the 7th or 8th flight my lungs were heavy with the warm unventilated air. All the years of degradation and infestation were palpable and seemed to taste exactly how I imagine urine saturated paint chips might taste. Luckily though, the air soon cleared as a refreshing breeze blew down from a gaping hole in the ceiling of the 13th floor. A leap, grab, pull, and mantle finally lead us the roof of our first Kansas City Urban Summit. 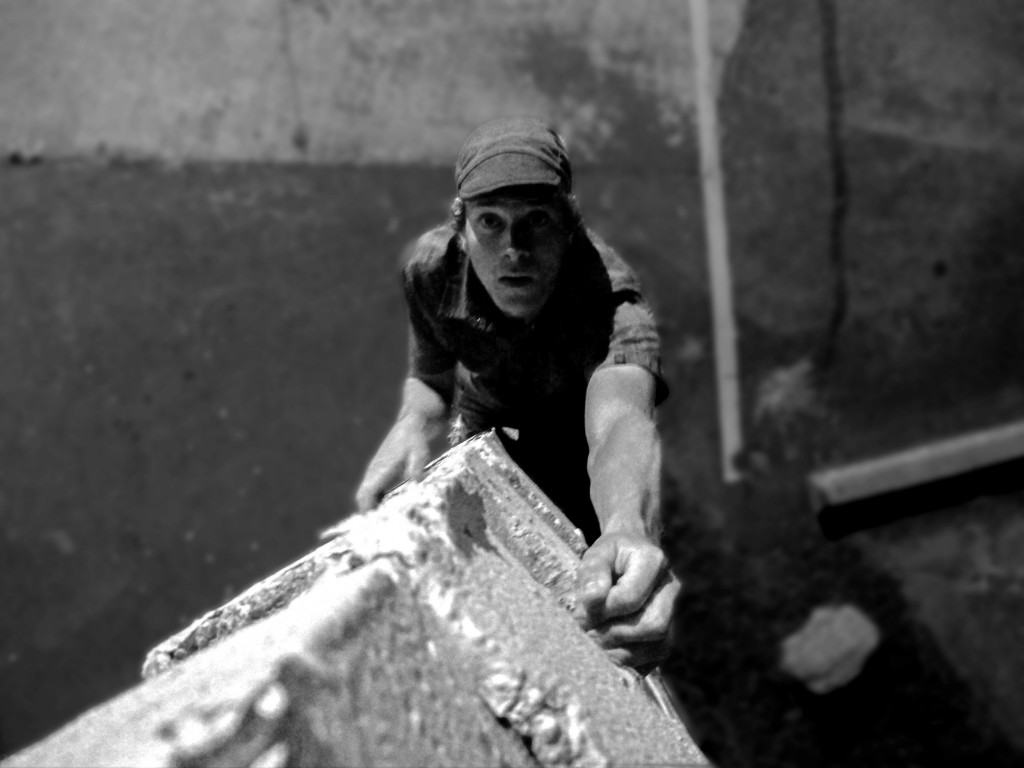 The June Honey-Moon was a full glass of champagne amber as it began its reign over the city’s twilight horizon. Corbin and I took only a short moment to take in the view before we began scoping out the next handful of rooftops from our commandeered crow’s nest. If we were to climb as many buildings as we hoped, we had to have a plan, and we had to move fast. We quickly agreed on a route that we thought would lend the most roof tops and plunged back into the stagnant hole in the roof. Practically running down the stairs and out the broken window I was back on the ground in no time. But when I looked up, Corbin had disappeared.

Immediately I realized why. A man in a black t-shirt and jeans had just turned the corner into the alley way and looked very interested in me. Had he seen me climbing down from the building? Would he call the cops? Or maybe would he jump me? I decided that it’d be best not to find out at all, turned the other way, and walked quickly up the next block. Five or 10 minutes later Corbin found me at the base of our next building. He had gotten down clean too so it was time to start climbing again.

Fences, ladders, loose bricks, window sills, drainage pipes, cracks, and old protruding bolts. Before I could catch my breath we were standing on our 13th rooftop summit. Corbin headed back to descend down the residential fire escape when he suddenly dropped to the ground. I followed his lead and quickly saw the need for our low profile. Just a few body lengths in front of us, the closed door at the top of the fire escape was the only thing keeping a rather skinny looking fellow from spotting us. I could see he was happily cooking food at his stove, seemingly unaware of our trespassing up his fire escape. To leave the way we came up would surely lead to him catching us, and in this neighborhood who knows what that could mean. Moving quickly, as if we had already been caught, I peered around the edge of the building hoping to find an alternative descent.

I rapidly scanned the back of the short two story building, but found only blank surfaces. There was a spot where we could probably jump down without twisting or breaking an ankle. I waved Corbin over to see if he felt like “Indiana Jones’n” it. He peeked over for all of one second before turning back at me in disgust.

“GROSS dood I am not jumping down there!” he exclaimed as loud as a person can in a whisper. Confused by his wording and being nearly desperate to get back to the ground I urged, “Gross? I know it’s pretty high but we can make it man, just tuck and roll…Right?!” Pointing to the ledge he shot back, “No, I mean there’s a freaking giant, half naked, hooker down there!”

I leaned over the ledge a second time to take a closer look. Sure enough, in the shadows directly below me was chunky woman looking back up at me as she pulled her panties to her waist. In the distance I could see man briskly walking away. Nervous and awkward I waved goodbye to her, “Shit you weren’t kidding, we must have spooked her Jon!” With no other options left, we ran down the fire escape as quickly and quietly as we could. With our fingers crossed the whole way down I think we made it out without causing too much of a scene… 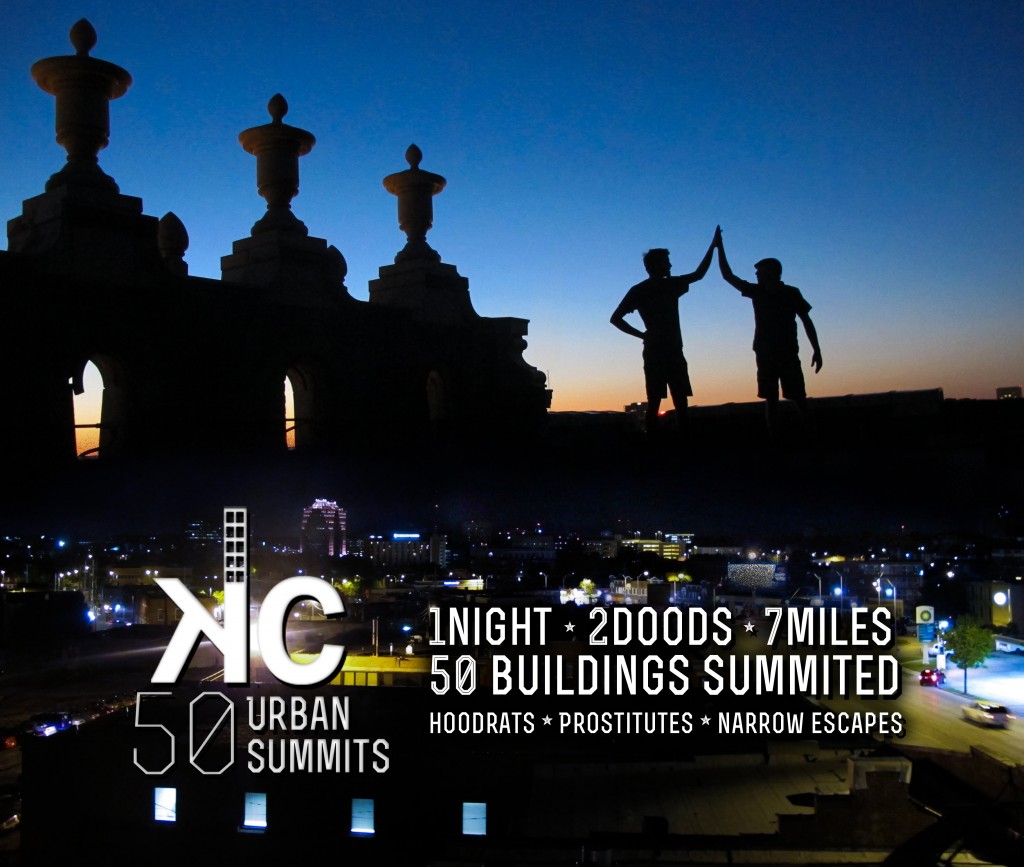 Two miles and 15 buildings later we found ourselves linking up short rooftops in KCs party district. With bats and pigeons flying over head and shouts from Friday night partiers bellow, we tallied up our summit count. “Was this 38 or 39? Those across the street were 35, 6, and 7…Right?” Without looking up from the rope he was tying around a large A/C unit Corbin added, “Yeah that sounds right. If we swing to the next buildings over, that’ll make it an even 40! Ok you’re good to go!”

Not needing any more reason to stand out on the street we wore our climbing harnesses underneath our shorts. So, I unzipped my fly and clipped the rope into my belay loop; our patented “Zip ‘n Clip”. With that I gave it a healthy tug test, lowered a few floors off the roof, and swung onto another. Less than a moment later Corbin came down the rope and we were off to bag a few more easy link ups.

I can’t be sure if it was the growing over confidence, bad luck, or maybe even it was our complete disregard for the “Smile you’re one camera” sign. Whatever the cause, I found myself growing pale in the back alley of a popular gay bar as a group of security guards began frisking Corbin down. The guard’s hands were curious and alarmed as he patted Corbin’s shorts. His words were quick and accusing, “What’s this? And this, what is that?!” I fought back my heart from trying to crawl up my throat and out my mouth, “It’s just a climbing harness! It’s just a climbing harness!” I could tell by his angry blank stare the words may as well have been Chinese.

“Does it go around your crotch?”

“So it goes all the way around your crotch??”

Then he started to rifle through my backpack. “What’s in here? What is all this shit?” This wasn’t my first time having to talk my way out of pickle, but how could we possibly explain the harnesses, rope, camera, headlamps and all that stuff? Corbin’s wide eyes screamed only “OhshitOhshitOhshitOhshit” so I knew I’d have to come up with something on my own. After what could have been an eternity, I finally convinced them that we were just ignorant kids out climbing stuff and that we had no interest in tagging or stealing anything from the club. Which was the truth. Pretty much.

With a stern frustrated look one nodded his head toward the exit of the alley sneering, “Better get out of here.” A second ago I was sure we were drowning, but now the surface seemed to be in sight. I zipped my back pack up and we B-lined it towards the next street. Turning the corner I began to breathe in a deep sigh of relief just to have it ripped back out my throat. A fourth security guard suddenly appeared only saying, “The owner of the club wants to talk to you”.

Pacing circles around a construction cone, the cigarette between his fingers seemed to be ignited simply by rage. A few more eternities passed by before the owner finally approached us. His words were understandably aggressive and to the point. I gushed the same half true story of ignorance and young restlessness as I told the guards. He stood for a moment unmoved. His silence weighed so much I could feel my heart sinking to the lower bowels of my stomach. We stood eye to eye but I was completely under his silent thumb. Finally, as if he had gotten enough out of watching us squirm he firmly said, “I don’t ever want to see your faces again.” Afraid he might change his mind I simply replied, “You won’t” and we disappeared.

After the narrow escape we decided that we had been both stupid and lucky enough for one night. While walking home we tallied up our summits to a total of 49. After much prodding and convincing, Corbin agreed that 49 was much too close to an even 50 to quit just yet. Nearby an old mid-rise building was being renovated. We took the construction scaffolding as a 12 story opportunity to our 50th Kansas City Urban Summit. The roof was dark, far above the reach of any streetlight or neon sign. The only sounds were steady gusts of wind sweeping over the ledge and creating miniature whirlwinds of composite and debris. We were completely alone in a city of over 2 million.

Breathing heavily from the hastened ascent Corbin looked across the city with bright blue eyes squinting so tightly they were hidden in the dark. Cautiously, I joined him at the ledge. In all directions the ocean of lights poured into the horizon. As if disappointed Corbin muttered, “There are no stars.” I shrugged and offered, “Well, we’re not in the mountains anymore.”

We stood at the summit of our brick tower in silence for a long moment. The adrenaline was beginning to wear off and my body began to hurt. Still mesmerized by either the horizon or fatigue or some ghost in the distance, Corbin mused, “Maybe the city lights are the stars here. Maybe we just had to climb high enough to notice them.”

As a living breathing namesake, Dakota Walz represents the few unlikely big wall climbers to come from the 3rd flattest state in the union, North Dakota. On rest days or while driving across the country he scribbles away in his journal and writes the comedic vertical adventures of beloved mulleted rock stars, Shred All Fear.