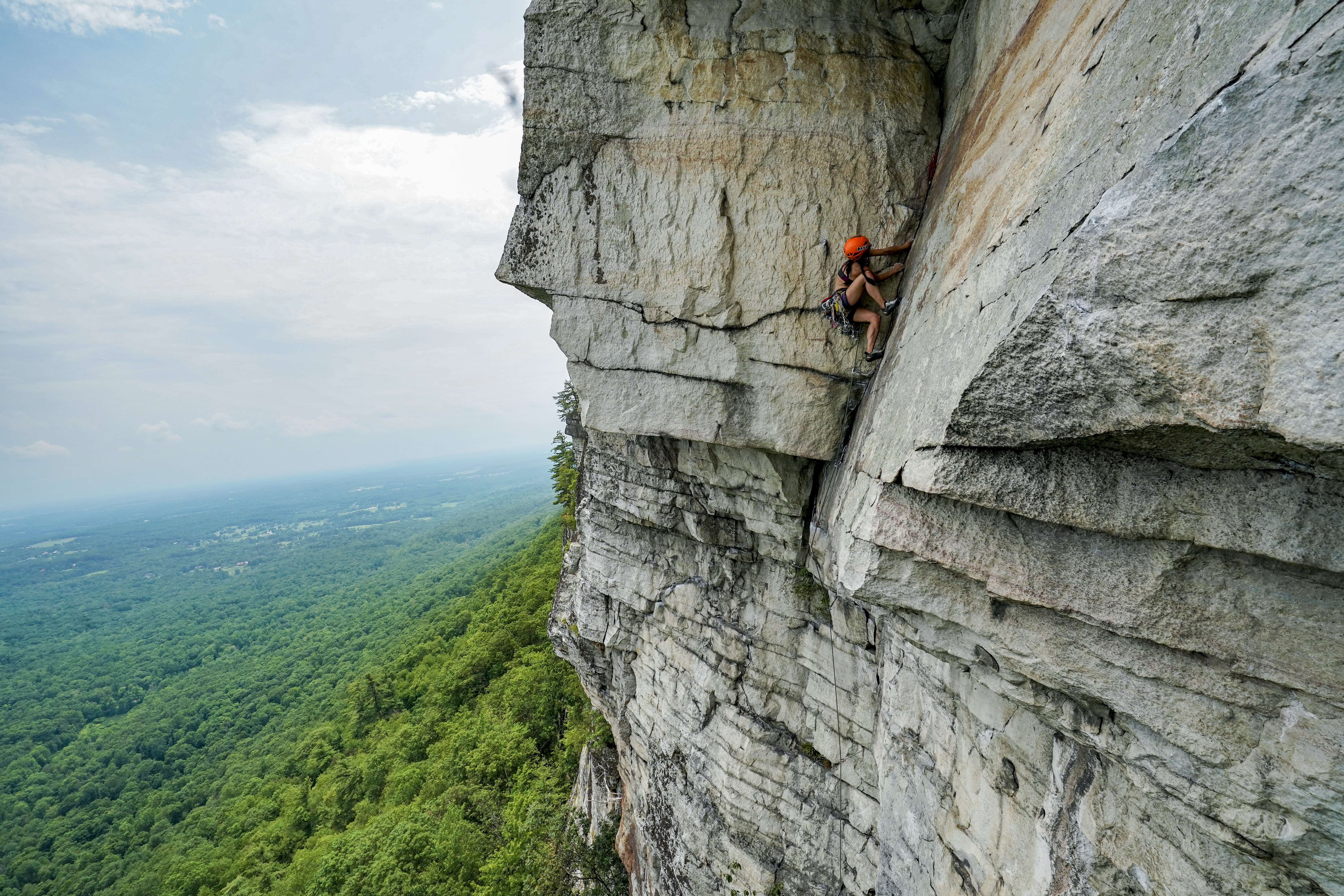 I started seeing it sometime last year, and it got a small chuckle out of me then: #bitchesonpitches. But the more I thought about it, the more I wondered: in a world full of bad bitches and rich bitches and boss bitches and basic ones too, what does that word even mean anymore?

by Kathy Karlo, from the new zine, Volume 16, now available . Banner photo of the author on the second pitch of Erect Direction in The Gunks by Chris Vultaggio

And then I wondered: should we be throwing around the word bitch so casually? Saying “I love you bitches” or stating that you’re “a proud bitch” sounds a lot like we are reclaiming this word and giving it a whole new meaning. But reclaiming, or reappropriating, a word means to appropriate again—to take a word once positive turned pejorative and make it positive once more and bringing it back into society as acceptable. For example, the word queer is an umbrella term for sexual and gender minorities who are neither heterosexual nor cisgender. It originally described something or someone as “peculiar” or “strange,” but in the late nineteenth century, it was used as a derogatory term. Today, people who reject traditional gender identities may describe themselves as “queer.” Thus, this word has been reclaimed.

Reclaiming words is definitely about power, and it’s certainly not a new phenomenon. We’ve been doing it for aeons: the words feminist and gay are just a few of many words that have undergone modern reclaiming. Bitch is likely one of the most popular among them. It’s so casual I can think of at least fifty songs with it in the title, from David Bowie’s “Queen Bitch” to “Bitch Better Have My Money” by Rihanna. I don’t even flinch when I hear it spoken on the movie screen or my favorite Netflix series anymore.

There’s no doubt about it: calling someone a bitch is a pretty straightforward insult. In fact, it has always originated as an insult, as it was used to demoralize women who were considered promiscuous. Basically, if you had a high sex drive, you were equated to a dog in heat. The word bitch has only had roots in people trying to shame female sexuality. Today: it’s what we call people, mainly women, when we think they are too opinionated, too bossy, too heartless, too inconsiderate, too emotional, too abrasive, too whiny—the list could go on and on—and, ultimately, someone deemed “not feminine.”

We call boys and men “little bitches” when they are seen as too sensitive. Regardless of how we are throwing this word around or whom we are throwing it at, it’s a way to be dismissive to that person, no matter the context. Calling someone a bitch is a way to shame men and women because it subjugates them, and like all derogatory words, it takes away their power.

So, can we reclaim the word bitch? Or better yet, do we want to? It’s one of the most versatile words in the English language. It has been so splintered that it’s become unclear to many how we should use it. Feminists call themselves bitches on the regular. Jo Freeman, an American feminist, writer, and political scientist, wrote “The BITCH Manifesto” in a wave of feminist movement in the fall of 1968. In it, she stated: “We must be strong, we must be militant, we must be dangerous. We must realize that Bitch is Beautiful and that we have nothing to lose.”

And that wave continued throughout the ’90s as bitch had a rebranding. Trina released “Da Baddest Bitch” in 1999, reinventing the definition of a bad bitch as a woman in charge of her sexuality. She was smart, and she was definitely powerful. It continued to become more and more mainstream, seen an ample amount of times in book and song titles, magazine company names, and movie and television series.

Because of how mainstream it had become, the word bitch had developed almost too many incongruous definitions. People in the early to mid-2000s resisted (and still do) this controversial word. Linguists and sociologists both will argue that the word bitch provides women with false power, and that it’s actually pretty hateful and sexist. Today, any woman in power can easily be labeled the b-word. And if a man isn’t assertive enough in his actions, he is also dubbed a “little bitch.” These are all ways that the word bitch remains problematic because regardless of how modernized the word has become, it’s still being used in a way to shame both genders.

Dr. Sherryl Kleinman, a professor of sociology at the University of North Carolina at Chapel Hill, states women cannot reclaim a term that was never theirs. Kleinman says, “The idea of reclaiming implies that women owned this term, it was then co-opted by men, and now women want it back.” She also states, “I recognize that some women feel empowered by the word, but that doesn’t mean they are empowered by it.”

I often think that the silver lining that our most recent presidential election has allowed us to glean is the outpouring of honesty from women. More women than ever before are standing up and truly speaking their minds. From marches to books to blogs, and so on and so forth, the sheer numbers are staggering. People are addressing the lack of gender equality and the double standards that exist to circumvent reaching it.

It has a lot more to do with the “bitch culture” than the actual word itself. So much of the issue has less to do with calling women names, but ultimately, how we treat women—how men treat women, and how women treat other women too.

Feminists have certainly fought long and hard to reappropriate the word, and thousands of women are in agreement as they use it in a more positive connotation every day. Claiming the word (claiming any word) as your own is empowering, and again, reappropriation—if done effectively—is all about empowerment. Bitch doesn’t mean what it used to, but is it empowering?

Or are we continuing to perpetuate a stereotype rooted in masculinity? Is it damaging to call yourself (or anybody else, for that matter) anything less than that? Is it damaging to use a word that implies that women are not equal to their male counterparts, even if a hashtag on Instagram tells me otherwise? I honestly don’t know. I don’t have the answers. But I can conclude that I am comfortable to assume a leading role, as opposed to the supporting. And while I am the first person to admit that #strongwomenonpitches doesn’t have quite the same ring to it, I don’t feel comfortable with being called a bitch. Being called that word still packs a heavy and painful punch for me, personally and professionally. And as a writer, words carry so much impact. Words hold meaning; language shapes so much of us and our reality.

As a strong female climber, and as a basic human being, I know and understand how hard women have fought for the right to be called exactly what they are: not bitches, but beautiful, intelligent, worthy, confident, and strong women.

A podcast producer and freelance writer, Kathy lives for rock climbing, sharing doughnuts with strangers, and positive vibes. Between baking and loving on dogs, she is desperately trying not to kill the last few living basil plants in her apartment. You can read more of her work and find her podcast at fortheloveofclimbing.com.