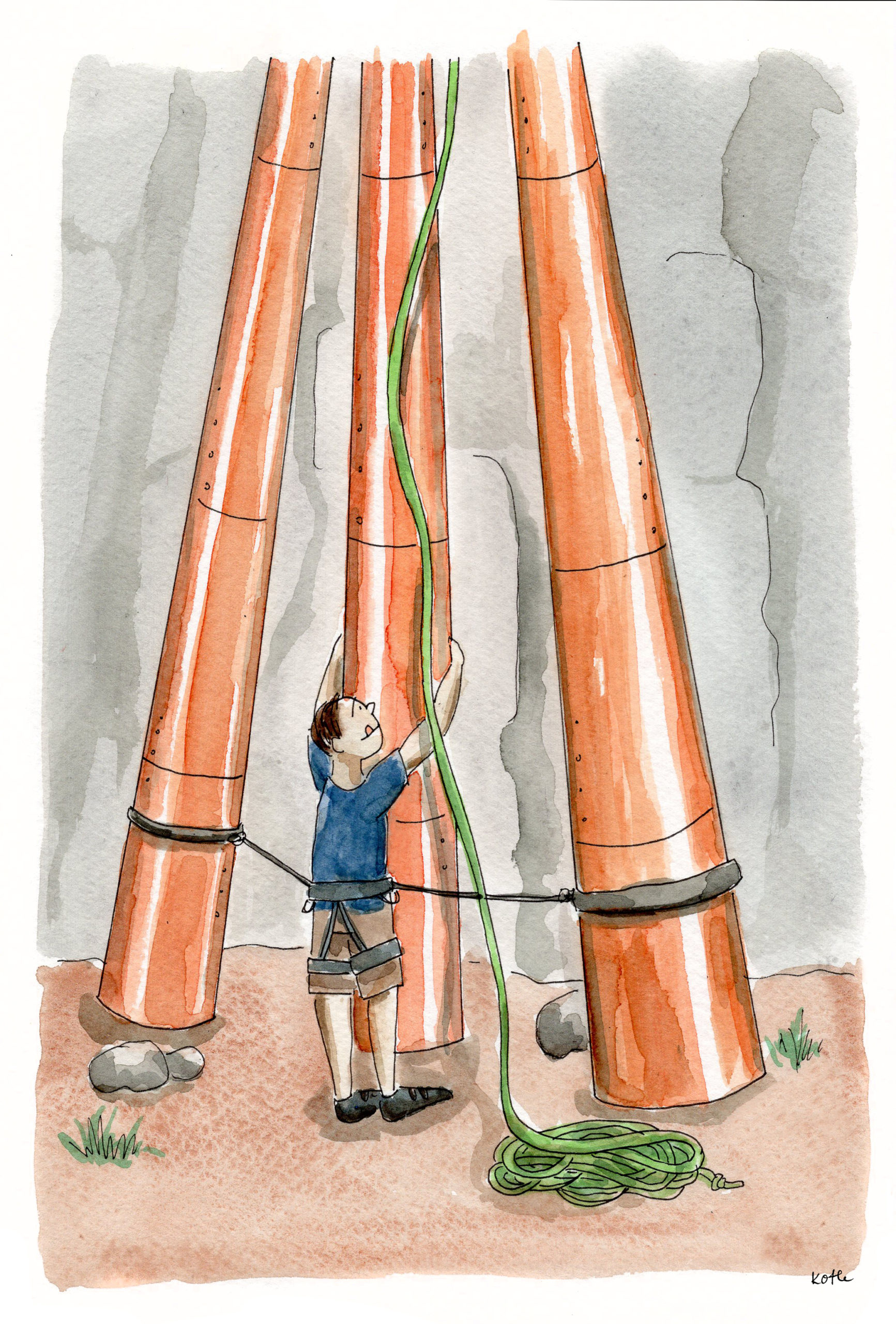 A new sport is captivating the nation, smash climbing records, and overcoming the issue of being old and washed up. This is the ballad of Bobby Berns, a hero to many, a wimp to others. Once a fine climber, Bobby, was seen in photos being passed by Honnold, the Huber Brothers, Stanley (RIP), Potter (RIP), and the other legends on El Capitan. But as he grew older, his ability to get up climbs was stunted and he needed to turn to a darker calling. And as we know, necessity is the mother of all innovation. With a new form of climbing called ‘freedom freeing,’ Bobby reinvented himself, giving hope to wimpy climbers and those who couldn’t train due to COVID.

It all stated back in England of all places. England, the land of no bolts, sketchy pins that can’t be replaced out of respect for dead white Englishmen, and an ethic of break your legs or send you bloody wanker. A place where you literally climb to the pub situated at the top of the crag and get blackout drunk with your mates to forget the trauma of not dying on some crumbly sea cliff. Old school ethics?  Yeah, they were invented here mate.

This historic irony is what makes Bobby’s time in England so interesting. He first learned this new craft from a young climber named Rich. On this particular day, Rich and Bobby headed to the one, and only, local bolted venue on English crumbling sea cliff to prove that this was not the day they would die. Upon arriving, Rich promptly revealed his stick-clip. Now Bobby had given up stick-clips years ago and then reluctantly accepted them back into his life. It happened on a trip to Mexico where Bobby had publicly shamed the editor of the Climbing Zine, Luke Mehall, for using one. In a glorious display of instant karma, on the next climb, Bobby Berns fell 15 feet off the start to a route, rolled down a long hill, and Luke with all the kindness in his heart didn’t say a word. Instead, Bobby just put his head down, borrowed Luke’s stick-clip and allowed himself the humility to use those wonderful tools from then on.

With this new respect, Bobby now looked upon stick-clips with fondness. As Rich prepared to go up the first route, he informed Bobby, in a thick British accent, that he would be “sticking it.”  “Like sending it first try?” Bobby asked as you do when you don’t really speak the same language but you’re meant to. “No, I’ll be using my stick-clip,” he asserted. He promptly got the first bolt clipped and then, with Bobby’s help tensioning the rope, he pulled himself up to the first bolt (Batman style), stick-clip attached to his side. Stick-clipping each proceeding bolt and repeating this process until he reached the top. He would set a top rope to which we could practice the route prior to a real go. It was mind-blowing and the start to what would be Bobby’s personal revolution.

They call it ‘French Freeing’ when you pull on gear to move upward but the French don’t deserve the honor of the phrase. Eat some frogs you arrogant spandexters, is what Bobby likes to say. Clipping each piece and pulling on it for tension or to advance upward is an age old practice by aid climbers, speed climbers, and the lethargic. Bobby knew ‘French Freeing’ well from his days as all three but the term had never felt right. Perhaps, if your old, you remember when President George ‘W’ Bush took office and 9/11 occurred. The ‘W’ administration renamed ‘French fries’ at the White House cafeteria, calling them ‘freedom fries,’ to dis the unappreciative French Government for not backing the invasion into Iraq. Well, Bobby too refused to let the French have this magnificent strategy. And in true American fashion, Bobby Berns would go big or go home.

Now, he has taken this new sport to the highest heights, well beyond just clipping one bolt at a time. Welcome to the future of climbing where we now clip the top of the climb in one go and call it ‘freedom freeing.”  Bobby believed the skill, concentration and sheer insanity involved in performing such an act ensures this sport will continue to be a growing craze in the climbing community.

Bobby’s goal was to cement his legacy in the history books by doing the impossible on The Nose in Yosemite National Park’s, El Capitan. Bobby would out do all other records, shattering them in the name of freedom.

His revolution started at the local crag with 40 foot bolted boulders. He taped three stick-clips together and got the top anchors on his third try. He was a natural and so he moved on to a larger wall which would require him to get more creative with the additional height. Bobby started adding reinforcement and side poles in what would become a type of long triangular monster. It was going well and he was able to clip the top of a three pitch climb at a popular venue. The locals looked impressed, they knew the immensity of the moment at hand. A new sport was taking shape and he was on top of the world, living the free life. That is, until it all came crumbling down.

The sound of fiberglass splintering made his ears ring and red liquid spewed from Bobby’s hands at a rapid pace.

“This is a 911 emergency,” he mutter into a blood soaked phone.

“What seems to be the problem?”

“Uhhh…I just had a thousand foot pole shatter into my hands and I’m bleeding really badly.”

Bobby, light headed at this point, sat down and sighed, “Ambulance for one?”

The ambulance came an hour after the call and Bobby had nearly gone into irreversible shock. A close call but every hero has a moment of self-doubt. Every Phoenix must rise from the ashes.  That was a low point and he needed to get back on the horse. There was too much on the line. This new sport was revolutionizing our sport, and rebuilding his identity. He couldn’t just throw in the blood soaked towel now.

It came in a reinforced carbon fiber pole, 4 feet in diameter (the amount he could just fit his arms around). Side poles of the same width attached to his hips on a harness like structure so he could bare the weight. Over 3,000ft long, it was just the right length to reach the last anchor on The Nose. Bobby had to bring the thing into the park in stages and assemble it over the course of two days. Hydraulic lifts allowed for extension pieces inside each other to shoot out towards the heavens. It cost a fortune, but we all know, freedom isn’t free. 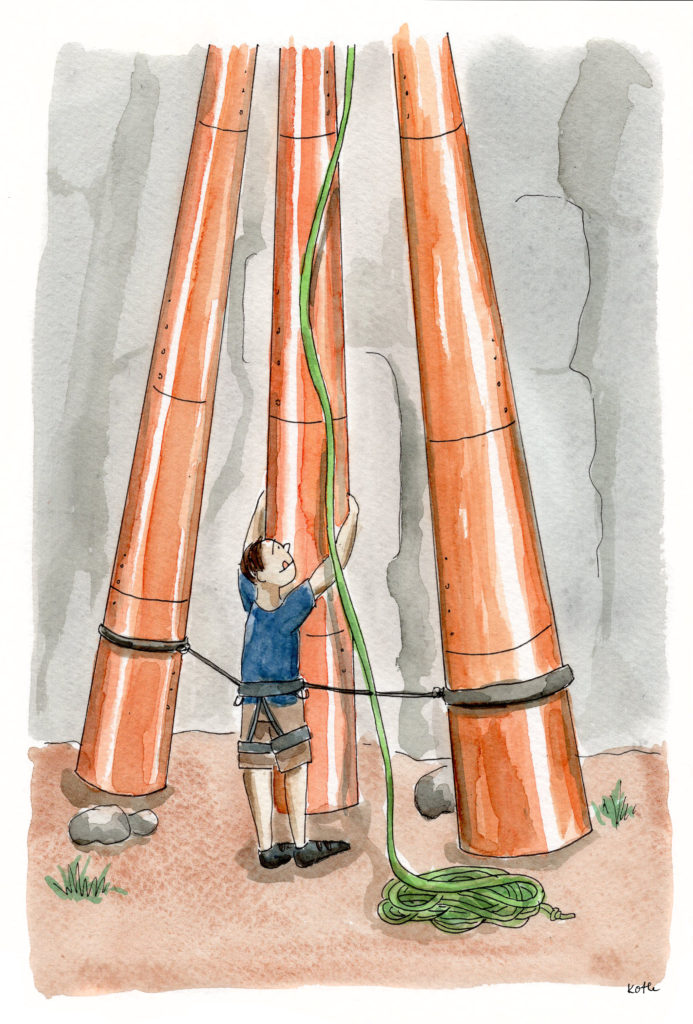 He set up at the base with no spotters as that would be too dangerous. Strapping it to himself, the contraption started growing and growing with the sound of the hydraulic lift ringing into the ether. Creaking and crawling upwards, it passed the Boot Flake, then El Cap Tower, the Great Roof, the Pancake Flake, Changing Corners…oh my goodness it was happening. Bobby’s dreams were being realized right before his eyes. “I want this, I need this, I am going to be something again and America and every old climber is coming with me,” he kept repeating.

Bobby took a deep breath and heard….sirens? Loud noises and flashing lights were all around.  The stick-clip police had arrived.  “If you can’t clip the first bolt, then don’t get on the route,” They shouted. “Only wimps use stick-clips!” they taunted.  “Here, I’ll clip it for you,” They mocked. All of Bobby’s insecurities were rushing back.  Maybe he couldn’t do it, maybe he was just old and washed up.  With the distraction, Bobby lost control of the device.  It fell like a massive Sequoia, causing a minor earthquake and shattering into millions of pieces.  The stick-clip police cheered. Bobby cried.  It was the last the world heard of Bobby Berns.

However, I understand he is still out there somewhere, looking to regain his confidence and reinvent the sport.  They say, on special Sundays his clipping can still be heard on the tops of long routes throughout our great country.  And, not all was lost. That is to say, the first freedom free ascent of El Captain is still out there to the brave old timer, or wimp, willing to sacrifice in the name of freedom. Just remember, if you can’t send or are too scared, you can always enjoy a good freedom free ascent. Some may call it cheating.  Others say it’s lazy.  Bobby Berns called it freedom. God-speed my friends, may you too feel the exhilaration of trying to clip it, on El Cap or at your local crag.

Scott Borden has spent much of his adult life researching and writing this piece. Happy April Fools Day!