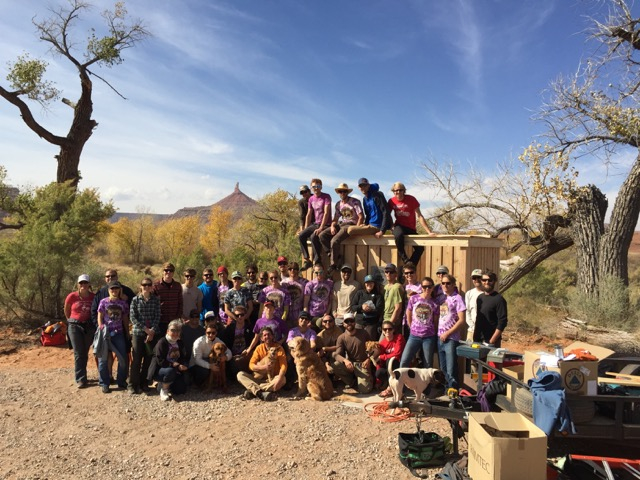 A memorial toilet is a hard thing to explain.

But that’s exactly what my friends were constructing last weekend, a new toilet in the Super Bowl campground in Indian Creek, Utah to honor a fallen comrade, Kevin “K-Bone” Volkening, who died doing what he loved: climbing.

by Luke Mehall, publisher of The Climbing Zine. Banner photo by Kolin Powick

It all made sense to me, I’d heard about the project months beforehand. The campground where the toilet was placed gets a ton of traffic, and only had one toilet for everyone to use. I’ve personally stood there while nature calls, behind a lengthy line of others who are heeding that same call. But when I try to explain the memorial toilet to others, it always comes out strange.

Me: “Yeah, it’s a toilet they are building as a tribute to a friend of ours that passed away.”

Random person: “So, they are honoring his life by building a toilet?” 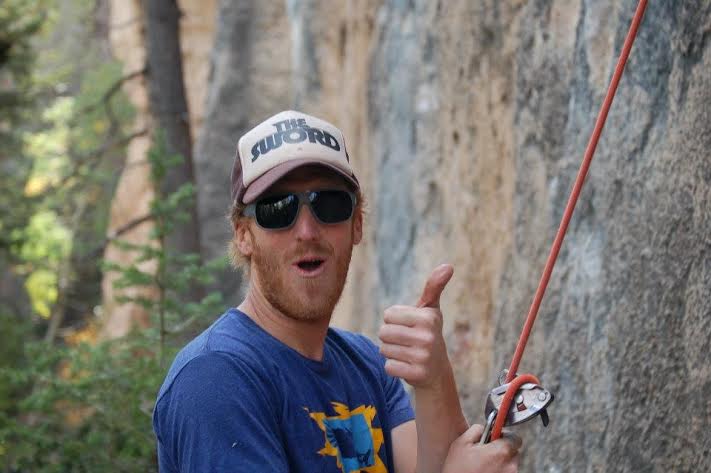 See what I mean?

I’ve been traversing the land between Durango and Moab so many times this fall to the casual observer I surely appear obsessed, inflicted with a healthy dose of masochism. Climbing the unforgiving red rock Dakota sandstone cracks was my number one on my agenda for October aka Rocktober; and I’ve given that pursuit priority over every thing else in my life. The only thing I’ve probably done more than climbing in Utah last month was my other passion: sleeping. God, do I love to sleep. And while we’re making lists: women, I love women. Throw some food and water, a 40 plus hour work week into that equation and that’s my life. Happy, like that catchy gets-stuck-in-your-head-when-you-don’t-want-it-to Pharrell song.

Anywho, while content as a pig in shit most of the time, I am not without my own demons and doubts. As a failed environmentalist and former Catholic you can only imagine the guilt that I feel, even in the most day-to-day activities. I feel guilty that I’m burning through fossil fuels like it’s my job just so I can merely recreate. There are rocks right here in Durango that I could climb. And why I am I so obsessed with these particular rocks in Utah? Shouldn’t I be doing something more meaningful with my life?

But, save for some moments in a lover’s embrace, nothing does feel more rewarding than climbing these rocks. And, it does put food on the table, I have the luxury of writing about my experiences, and occasionally getting a paycheck for it. So, I continue on.

And, I do feel like there’s more of an exchange than mere physical gratification. I feel a connection with my creator out there. I love the joy of letting my mind become meditative, and not sending fifty text messages, a hundred emails, and checking my Facebook thirty times a day. Perhaps I am afraid of becoming a machine, so I must go where I am a man again, where I must rely on my inner strength and survival instincts.

And, if I can dare go deeper, and quote the climbing legend Royal Robbins, who is to say that climbing isn’t a search for God? We, lovers of nature, hold the wild lands of the earth near and dear to our hearts, and would not want to live life without them.

But, wait, this is supposed to be an article about a toilet, and I’m writing about God? Back on track, let’s go to Castle Valley, the day before the toilet was installed. 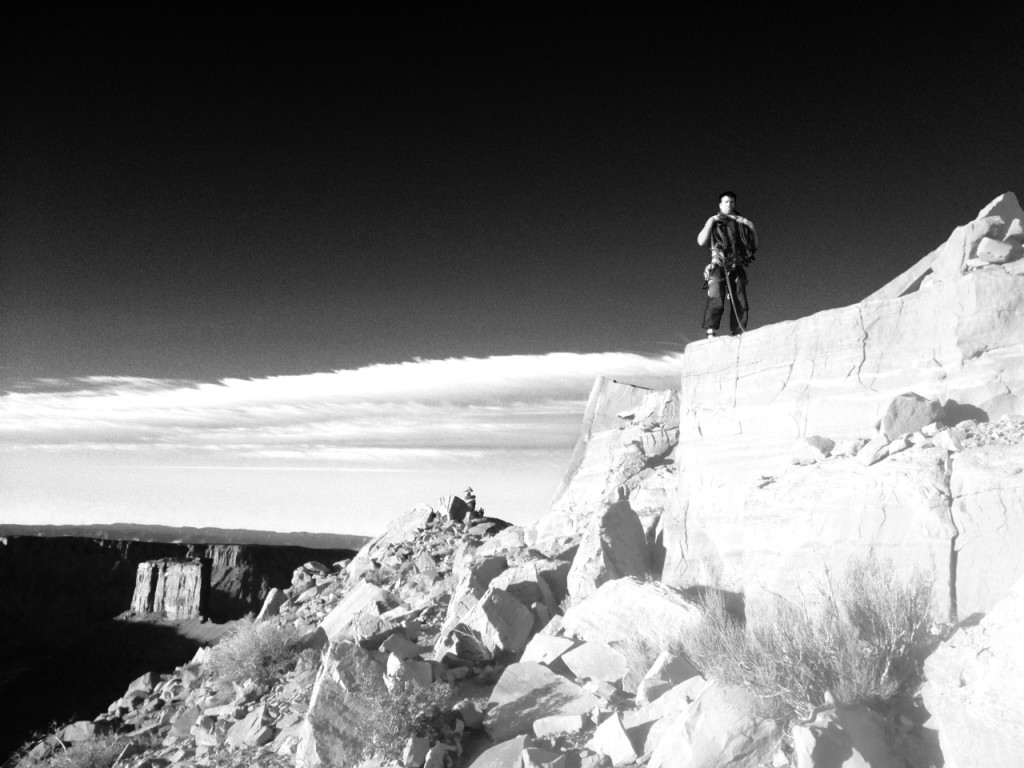 Shaun Matusewicz coiling ropes after climbing The Priest in Castle Valley. The Convent sits in the distance.

If Indian Creek is like living in a painting, Castle Valley is the masterpiece. Castleton Tower, the first in seven iconic summits on a ridgeline, is a perfectly square castle made of Dakota Sandstone, which stands so prominently it is a natural lightning rod. The other towers and buttresses, given the names such as The Rectory, The Priest and The Nuns, suggest the place is a spiritual haven, and in this environment, it’s impossible not to feel inspired. As a side note, this area has seen more than one television stunt: Bon Jovi made the music video to “Blaze of Glory” on the summit of The Rectory and more than one car company has helicoptered vehicles to the top of Castleton for commercials.

So my buddy Dave and I are in Castle Valley, for Halloween, because I didn’t want to party on Halloween this year, and we’re climbing towers. Dave is one of my favorite climbing partners because he’s mellow, safe, and smart. He’s also getting married, and he just bought a house and got a cat, and well, I know these signs, I have to climb with him when he has the time, because he’s just going to get busier and busier with life. The call from my climbing partners saying that they are either getting married or having kids is getting to be quite routine these days. 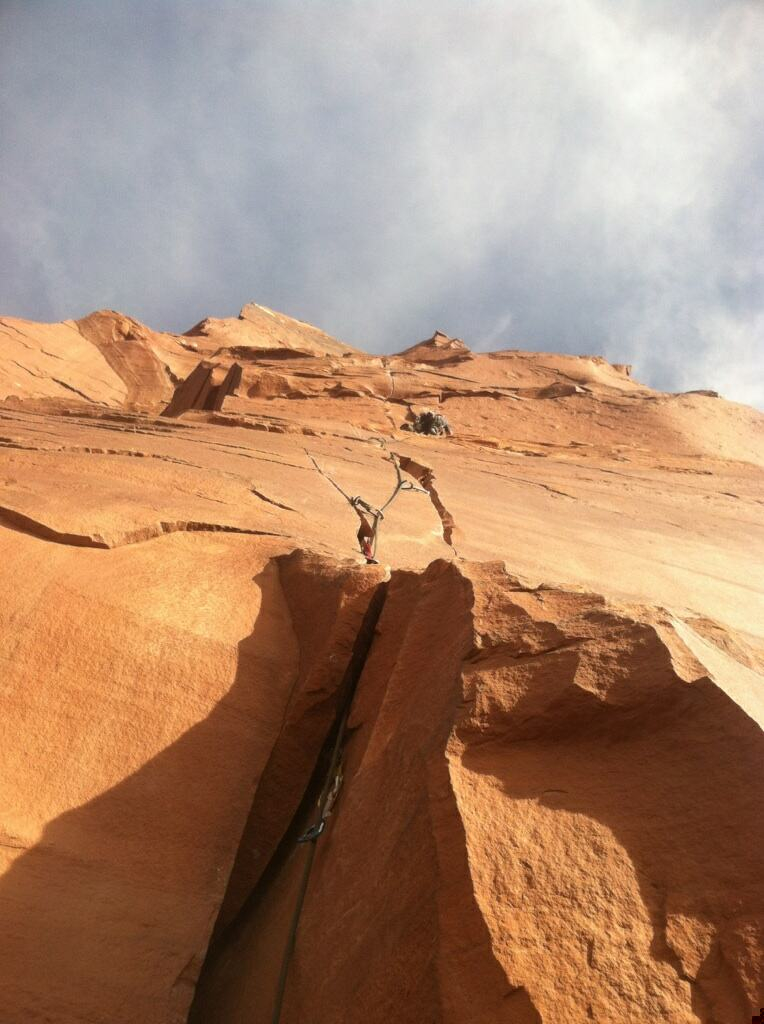 Splitters for days on Fine Jade, 5.11. photo by Dave Ahrens

After climbing our first tower, The Rectory, I hunger for more. Dave seems content. I feel like a puppy dog that just has to be ran a little bit more, or that energy is going to get him in trouble. And, we begin a negotiation of sorts. “Well, I want to keep the fiancé happy, I shouldn’t get back too late,” he says.

“That’s not how it works bro,” Dave says knowingly.

I play my cards carefully, “Well, how about we just do the first pitch”.

And somehow he agrees. We climb Castleton, and then I’m happy, and so is Dave, and we are standing on a beautiful summit, with views of Arches, the La Sal Mountains, and even a peak into Colorado on the horizon. Stunning. We rappel off the tower, and then I have to make a decision: to drive back to Durango that night or roll down to Indian Creek and hang out with the crew that is installing the memorial toilet that weekend. I’ve got to be in Durango for work the following afternoon, so I didn’t have time to actually lend a hand, but I wanted to hang out with everyone and show my support.

Indian Creek wins. A campfire with many new faces, and it’s that same ritualistic, timeless desert fire, while flash lightning lights up the night. K-Bone’s spirit is felt, as new friends meet and old ones unite. His infectious, friendly personality made K-Bone an instant friend for countless people.

In the morning I meet Kolin Powick, who helped spearhead the project. Powick was able to put the memorial toilet into words better than I was, in my stumbling explanations. 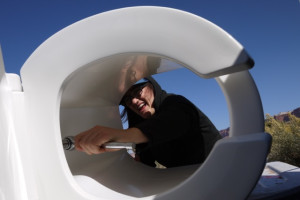 Marge Volkening helping with some installation for the memorial toilet. photo by Kolin Powick

“The goal was to create something long-lasting in K-bone’s name and honor at his most favorite climbing area on earth,” he later wrote. “We ended up with one of the most unique and special outhouses anyone could have imagined.”

And they did. With over 40 volunteers, including his wife Marge, his Mother, his sister and his brother in law, the toilet was constructed in about four hours.

I can’t wait to sit on the throne.

This story is also published in Mehall’s fourth book, Graduating From College Me, A Dirtbag Climber Grows Up, available in print and on Kindle.