Effort and Folly on Mount Waddington by Drew Thayer 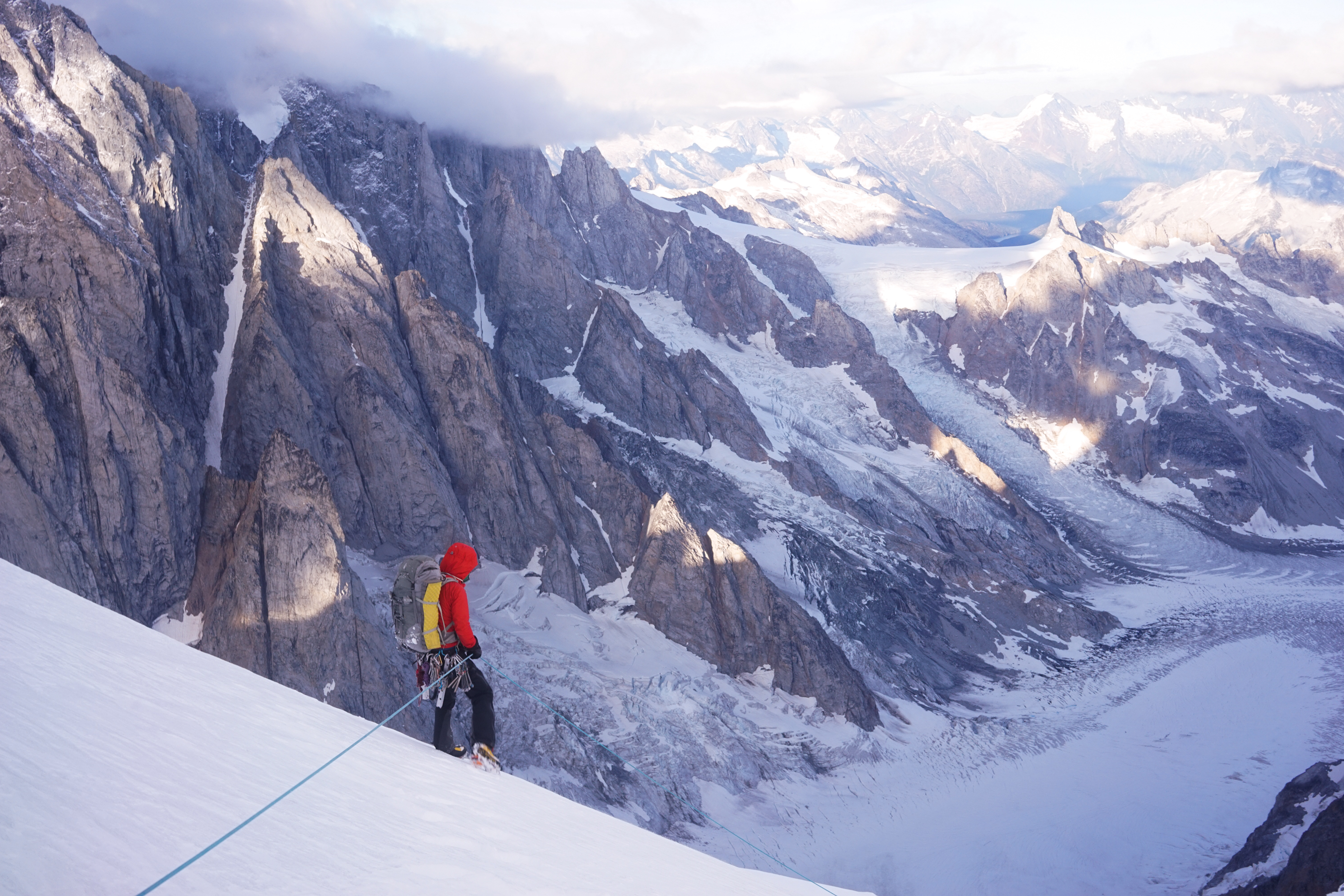 The cam lobes slide in the fissure as I test it, useless. This dark, metamorphic rock, tortured entrails of a bygone continent, is too slick and brittle for our modern hardware. As if the old recognizes the young: Who are you, whippersnapper, with your eVent fabrics and C3 cams? Come up here as your forebears did, with alp-hammer and pitons, and we’ll talk.

Note: This piece is published in The Climbing Zine, Volume 10. Photos by Craig Muderlack

I consider pounding a knife blade, but the seams all face downward…best to just keep moving. Taking care not to break the snow loose underfoot, I begin a rising traverse toward a break in the rock band. At each step, eight inches of wet snow sloughs off down the snowfield, entraining more snow with it until it pours over the lip of the crevasse. I picture Craig at the other end of the rope, hunkered beneath the dripping bergschrund as four hundred pounds of slush puppy cascades in front of him, and then drive the image out of my mind. Got to keep moving. Finally my picks reach featured rock, and I focus on the relative security of dry-tooling to a safe belay stance. It looks like one more pitch of shattered stone to the next snowfield, where we’ll find out how badly the seracs we scoped from below are threatening our path. 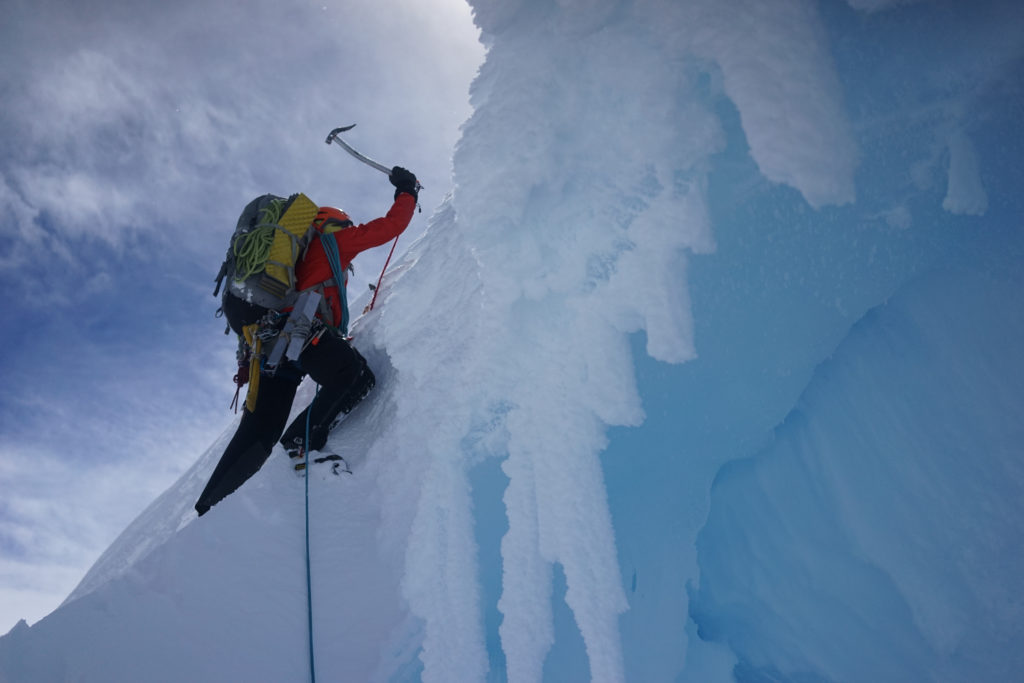 “Dude, that thing’s hollow.” From the intensity of his eyes, I can tell I don’t need to check for myself. Damn…I thought the ice bridge looked solid. I’m too committed now, so I gingerly place my picks in the frozen foam and kick ever so softly…the tight report of a timpani drum answers. I know I shouldn’t look down right now but do it anyway. Ten feet, then the bridge thickens. Step, pause…step, pause…the drum keeps beating, and we place our trust in ice.

If there’s one thing I’ve learned: I’m not hardcore. I’m not going to be the strongest, fastest, boldest. I’m not going to set records. My dramas unfold for an audience of one. On the road bike, on the plywood wall in the garage, sometimes at the local crag, I get to be the hero, the guy on the magazine cover, cool focus in his eyes and a world of peril beneath. I’ve learned the tricks of self-deception, and sometimes it feels good.

So what am I doing here, scratching rotten rime from this fractured stone, searching for a pick hold, half a rope length up a tower on top of a mountain, and we both know we can’t climb this before we lose visibility to storm and darkness? I just always needed to know what was beyond the horizon. As a kid, I’d go running in the afternoon, always chasing the view from the next ridge. The ridges kept coming. I rarely made it home before dark.

I awake in the same position I fell asleep shivering in, spooning the curled bulk of Craig. I can tell without asking that he hasn’t slept. I listen for wind but find a silence so thick it smothers my senses, like trying to swim in a bowl of gravy. Snow. Still snowing. The patter of flakes on the tent is just audible. The silence is like a pause between waves, a haven: in this moment, all is calm. In the next, who knows?

By now, each small step feels like the mountain itself. Muscles from the ankle to the gut contract to pull my heaving chest once more upward. One more increment of progress. One in a hundred thousand. Each step we haul our bodies, our armor of clothing, the heft of our packs.

Why is each step so hard? It’s not just our packs we carry, our rations and clothing and protection, the pair of rock shoes we brought optimistically. Ibuprofen and tape. GPS, radio. Three dice for entertainment if we get tent-bound. Sleeping gear and six days’ food and not enough fuel. This load we carry in our skeletons, lift up the mountain with our muscles. But it’s the other loads that drag us when the rain pelts down, that laden our bodies as the wind whips lariats of ice crystals across the bare glacier. Will the weather hold? Can we trust the forecast? I keep the rope tight as Craig probes ahead of him, seeking safe passage across the umpteenth crevasse, and doubt creeps in.

We shake the tent and emerge into the day. There are precisely three things to see in this new world: a snow-dusted tent, the faint outline of a serac, and a haggard man staring glumly out of a soggy raincoat. Senses trade—I close my eyes and open my ears to a roar: this isn’t the sharp silence of clear distance, but the collective whisper of a billion snowflakes settling like a blanket on the Coast Range. This was supposed to be our weather window.

We contemplate the white noise like television static after the last program; somewhere in there are scenes and plot devices, the arc of our characters, climax and resolution. The magic bridge through the crevasse field, the hidden jug above the chockstone in the summit chimney. The moment we get to succeed. All there, in the noise, the uncertain future. What is real now? My knees shiver. The stove sputters, running out of fuel.

I’ve been staring at this skyline for the last five months on a photocopy pinned above my computer screen. So perfect, so clean, a serrated knife slicing blue sky. I inscribed these jagged lines in my retinas, eyes closed and thighs screaming on the elliptical trainer, lungs bursting on the forest trails, the hot burn at the apex of a hundred sit-ups. At work, my eyes lost focus on a blinking screen littered with matrix algebra, and I saw this skyline floating behind the math: Combatant, Tiedemann, Asperity, Waddington.

Here they are now, in front of me, below me. Floating in the subarctic twilight like I could reach out and touch them. Golden like the crags of my dreams, but as we watch, nightmarish lenticular clouds gather in the mounting wind. Across the gulf of the Tiedemann glacier, those summits seem in another range altogether. The space between us is beyond reckoning, seven thousand feet down to a river of ice, then back up the scythed ridges and battlements of some forgotten Mordor. Those peaks, the gentle crest of ridges between them, tower above a vertical mile of pure crumbling chaos. Standing tantalizing before us, the skyline is still so far away. I want to be there. I want to go home. I want warm hands. The light dims, and the wind picks up, and it’s time to find shelter, probe out a safe zone, pitch the tent. Desires and fears and flesh and folly tucked into one nylon envelope on top of the Coast Range, waiting till morning.

By now, the massive bulk of the mountain is beneath us. We kick steps up a rising crest of white, bury one picket per rope length for good measure, and bury axes after that to keep our momentum. With each step there is less above, more below. The world begins to exist beneath, snow-draped peaks spreading to each horizon, the sharpened teeth of the world. Somewhere out there lies the eternal stretch of the Pacific and its legions of clouds, the source of all this moisture. The wind that stings our faces has hit no other thing, a clean breath careening off the world’s largest ocean. This is what we came for; this is what we’ve earned from all this toil, if just for one day: to walk in the sky.

Drew Thayer recently moved to Denver, Colorado, and despite the demands of grad school, he cannot contain his fascination for the physical and mental journeys we travel in the vertical world. He explores these pursuits through climbing and writing and remains committed to pursuing type-two fun on objectives that seem a little too big. He records musings and images of his ventures at www.carrotsandpb.blogspot.com.