Dancing With The Queen (excerpt from Volume 22) by Luke Mehall 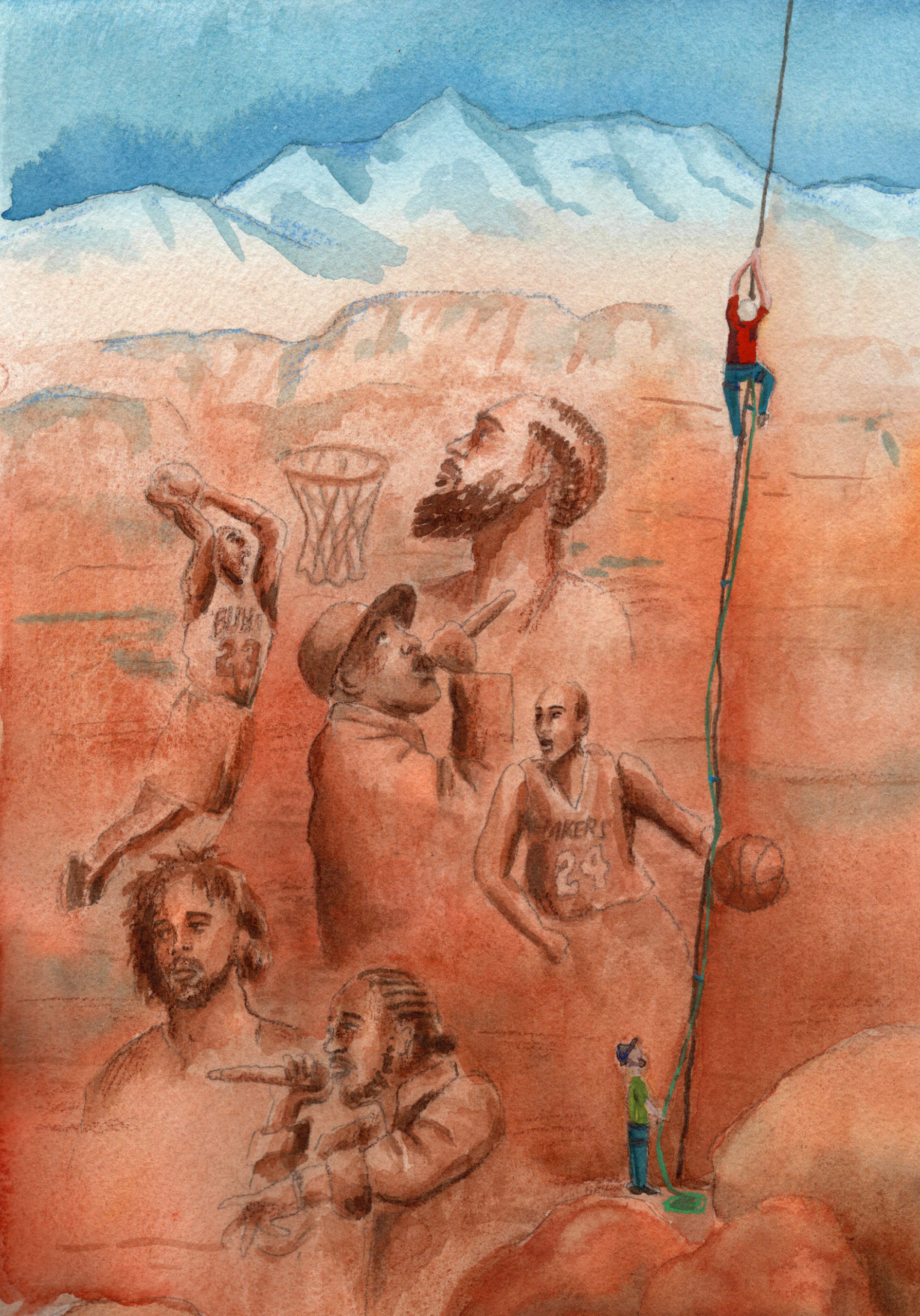 In my body, I’m a climber; in my imagination, I’m a rapper. The poets of my generation are MCs—embodiments of the modern American Dream—and the music of hip-hop is so ubiquitous with our culture that it’s hard to imagine life without them.

I don’t just listen to hip-hop; it bleeds into my soul. All music does really, but there’s something about hip-hop that gets me fired up like nothing else. The visualization of success, the Jay-Z, make room for me world, because I’m here—well, I love that mindset. That human will.

Note: this piece is an excerpt from the new zine, Volume 22, now available

Climbing demands confidence, but a different type of confidence. Not necessarily the Jay-Z confidence, but maybe the Kendrick Lamar type. Jay-Z would never directly tell us he was depressed; he makes the song cry. But Kendrick would.

Is our generation the first one to really be open about this mental health stuff? By the way, I think all young people, myself included, are the same generation—I don’t believe this X, Y, Z, Millennial bullshit, but I’ll elaborate on that another time. (Or you can read Kurt Vonnegut’s insightful thoughts on the subject.)

Though I reached the lowest lows of depression when I was young, I honestly never thought I would go back there again. And, I haven’t. But depression crept up on me during these last two pandemic years, and I knew I needed to act. To remedy it.

The heaviness usually would hit me at night. During the morning and day, I’d stay busy with climbing, getting out on the local trails, and my work, but in the evening, life felt empty, sad, and isolated. I was recovering from a breakup, and I was also facing the reality of going from working at home to living at work. That and the weight of the world. Well, it weighed heavily on my mind, body, and soul.

I feel like it ain’t no tomorrow, fuck the world

Usually, I roll out on a Friday, and try to get there before it gets dark, and the chances of hitting a deer or a cow increase greatly; by morning its practically guaranteed the blood will be on the road, with a carcass just off the side. The older I get the more I dislike driving at night, even though my 4Runner is equipped with a “deer killer” on the front; one of those saved my life one time when I hit a deer going 60 on my way home from the Black Canyon, back in my Gunny days.

I hate the fact that my escape requires fossil fuels, but I feed the beast. I need the beast. I’m no longer young and idealistic; I’m in my forties and realistic. But I still have hope. Well, better said, I know where hope is. And hope lies at the end of this drive, at the trusty campsite so far back a dirt road I can almost guarantee no one will be there.

Sometimes heading into The Creek I’m all fired up about the project I’ve been working on for damn near five years, but these days, on a Friday evening, I’m often thinking about the calmness of sleeping in the desert.

I’m pretty basic when compared to a lot of other climbers these days. I just sleep in a tent or in the back of my truck—one that has zero conversions for camping. Then again, I’m a “work-bag” these days, working during the week and climbing on the weekends. To be honest, I love the balance. And even though I’m roughing it while camping, I know at the end of every climbing trip is a bed waiting at home in my condo.

By the time I hit my favorite dirt road in the world, which is more of a wash than a road, the vibes of the music have usually changed from Kendrick or Jay to Grateful Dead or Bob Dylan.

I’ve been coming back to this zone for years. For the first few years, I was hungry for first ascents, but soon one climb consumed me. A laser one-inch crack that could stack up with any splitter on the planet. And Dave and I had it all to ourselves.

Sometimes things line up so well in life, and sometimes it seems like God (or whatever you want to call her) is against us. But in this little corner of the universe, in what is now (again) Bears Ears National Monument, God was on our side.

My buddy Adam Ferro had actually discovered this climb, and I was so obsessed about it that years later he had to remind me that he actually found it. Obsession can skew the brain. All I know is that for several seasons straight Dave and I were obsessed with what would become Purple Reign, or The Queen.

If you know me, you know about this obsession. For years people would ask me how it was going, expecting to hear that I’d got it done and sent it, but alas, I’d tell them I was stuck in the dreaded “one-hang” space. If you’ve projected, you know that space.

Our routines before every attempt became more specific as time went by. First the trail had to break in. We found the coolest way to go through massive boulders that would leave Chris Schulte drooling. One of them we called the biggest boulder in The Creek, which was somehow barely situated on a chunk of dirt, destined to collapse and roll down the talus.

But that boulder still stands, and it almost seems suspended in time. A miracle of sorts. Once we walked by that, the rituals began. The first one was finding a cool-looking little rock and adding it to a stack of rocks we dubbed the friendship cairn. The bands of rock we hiked through had some really cool petrified wood and crystal-like rocks that apparently flew out of a volcano aeons ago from the Abajo Mountains.

I always state a prayer or intention at this cairn, located on a plateau, which we labeled phase three in the hike. Most Creek hikes are short, but this one is about an hour or so—the reason why these cracks are just now getting climbed.

When we arrived at the cliff, both Dave and I would unpack our gear at the same spot every time. We’d do the same warmup every time, a combination of two routes, Shorty Got Low, a fun little hand crack, and The Pawn, a varied crack system. Dave would usually do three laps, and I would do two.

Then we’d crank some music and tape our fingers. The second pitch, the crux of the route, was so steep that it would often make our tape “roll” on our fingers, which is a miserable feeling and basically shuts down any attempt. So, Dave suggested we put super glue on each end of the tape. And it worked perfectly.

We’d each usually slam a yerba maté, and buzzing from excitement and the caffeine, we’d start up the climb.

Oh, but I’m getting ahead of myself. The last ritual was to hold what we called the “moki ball.” A baseball-sized rock that must have come out of a volcano too; supposedly it had crystals inside, but we never dared to break it. We held it for good luck, and then the pregame rituals were complete.

I can’t exactly recall how many times we did this ritual, but I do know if either of us missed a step, things felt off. Perhaps the more we tried it the more superstitious we became. To quote Michael Scott from The Office, “I’m not superstitious, but I am a little ’stitious” 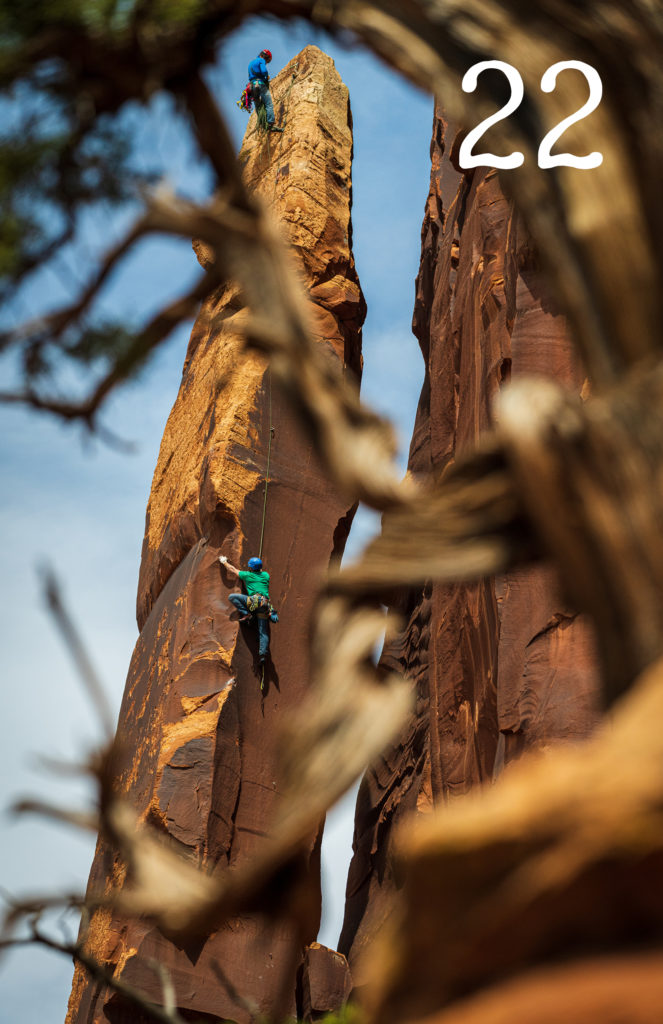