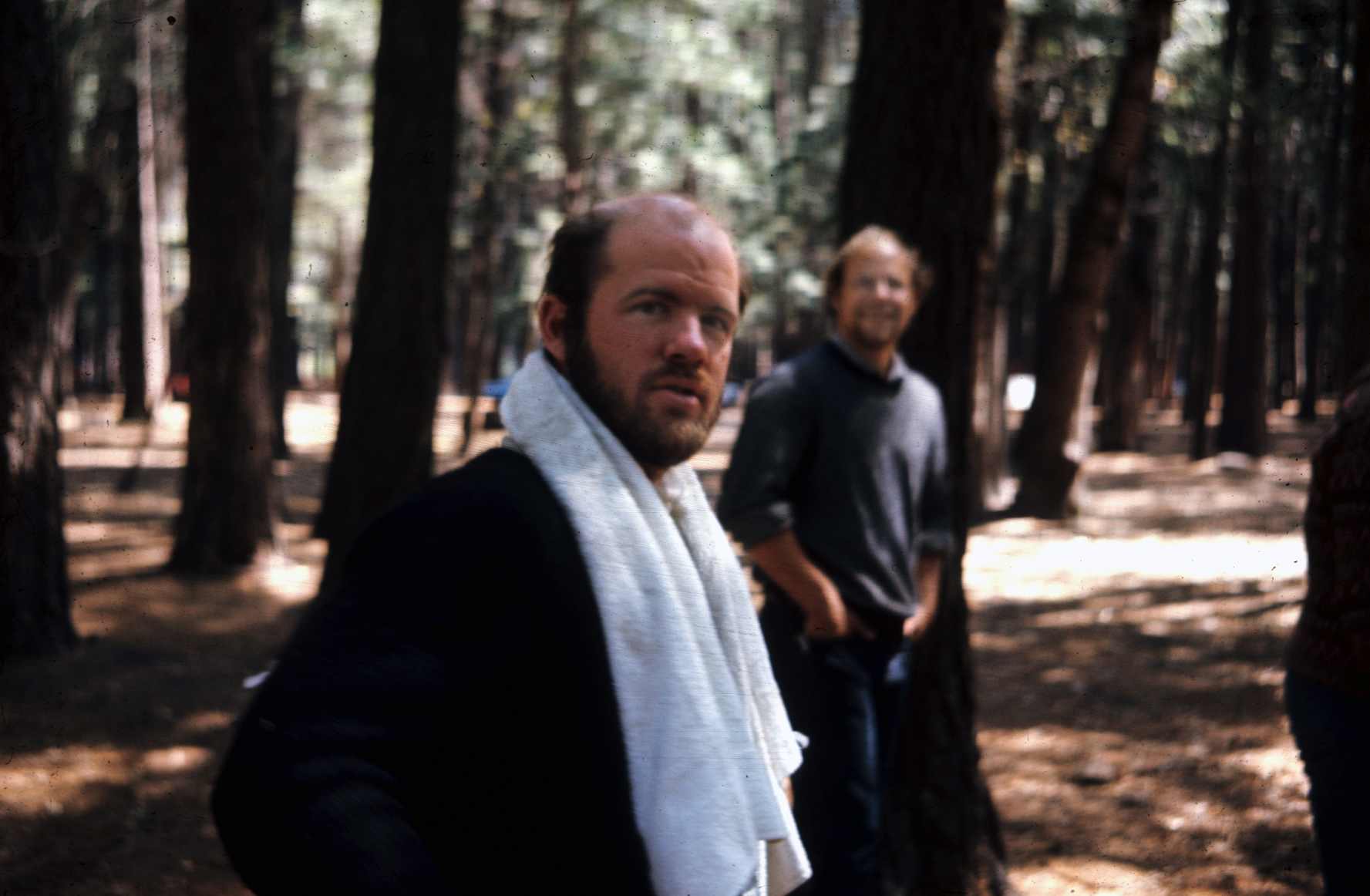 by Pat Ament (note the full version of this piece was published in Volume 17, which is now available in print.) Banner photo by the author.

Ascetic solitude is difficult. You withdraw from the world to get a clearer glimpse of who you are, what you are doing, and where life is taking you. The people who do this in a very committed way are the contemplatives.

Royal Robbins’s most beloved partner, Chuck Pratt, was one of the all-time greats of Yosemite climbing during the 1960s, known for his airy, sensational aid lead over the big overhang many hundreds of feet up the North America Wall of El Cap and for a couple dozen frightful, sparsely protected, if protected at all, off-width cracks in The Valley. His famous Twilight Zone, where he ascended with his usual flawless technique, and without a single point of protection above guillotine flakes, no chalk, a pair of Cortinas for shoes, remains a story that causes even today’s best climbers to cringe when they speak or hear of it. Pratt was known for his climbing gift, his purity of style, and his calm, quiet demeanor on the rock. Many reverential comments about Pratt exist throughout Royal’s writings about Yosemite. One of the earliest appears in the small publication Mugelnoos in 1959, where Royal talks about a desperate crack Pratt led on the first ascent of the North Face of Middle Cathedral Rock: “Chuck’s lead of this chimney is certainly one of the most remarkable…in the history of American mountain climbing.”

Yet troubles in Pratt’s soul came out certain nights in the campground when he drank. He struggled with a kind of cosmic despair. Pratt, I think, was lonely, uncertain of his place and his potential in life, lost, broken. His face had pain, but also a joke in it easily as often. While inwardly cynical, he had a deep aesthetic sense—that of a true artist. Often he exhibited no emotion, yet I could gather he held inside an array of emotions—which included anger. Yet when he climbed, during the 1960s, life crystallized. He became the amazing person and master climber he was.

At a young age, Pratt thought of running away with the circus. Instead, he fell into climbing. That is not a good way to say it, because Pratt never “fell” off the rock. Maybe on occasion a terrible aid piton pulled out, and he was caught by the rope. His free climbing, though, was profound and impeccable. Wide shoulders, relatively short, prematurely bald, and a slightly pug nose suggested that perhaps someone in his line of genealogy might have been a dwarf. By the time Pratt became one of the most respected climbers in Yosemite, he could walk wires, the kind that guarded a driveway or lawn. He juggled balls and wine bottles and continued to have that circus feel about him.

I will never forget when Royal took me to Yosemite in 1964 and when I met Pratt. He had gotten word that Royal was traveling with a kid. Royal and I became friends when he came to Boulder in 1963 to climb with Layton Kor. Royal and I did a difficult (A5) aid climb on Longs Peak, and the following year he and I made a number of first free ascents around Boulder. We free climbed Eldorado’s Yellow Spur, for example, and he invited me to travel with him and his wife, Liz, climb in the Southwest desert, and eventually arrive in Yosemite. As Royal and I stood in the cafeteria line, that first morning in The Valley, I spotted Pratt at a table. He finished breakfast, stood, left his table, and walked over to us. I watched as Royal and Chuck shook hands. Royal then introduced me to Pratt. He had a light complexion and, on the sides of his head, blond hair. His face had a luminous beauty, and I sensed a powerful spirit. As he shook my hand, he subtly pushed back against my hand with his. My hand moved toward me an inch perhaps, which I took to mean he maintained a boundary, or a space, between himself and other people. One had to earn Pratt’s trust. He had a rogue face, a rueful look as though he had heard about the rumor of life and knew for certain now he was in the middle of its comedy. Everything was futile, but he would enjoy things as best he could and play the game.

Howard Nemerov, poet laureate of America, wrote a poem called “Trees.” Its first line: “To be a giant and keep quiet about it.” Pratt was a giant and kept quiet about it. Through the years, I would learn more of the pain he held inside and that in most cases he did not wish to communicate. His was not a pain easily resolved or probably that ever (at least in this life) would be healed. Chuck raised his eyebrows slightly as he studied me in the quick instant he had to work with. That produced across his forehead horizontal wrinkles, indentions of time…or they were lines of experience, and he was still in his twenties. He did not want to violate my young sovereignty with his curiosity. He would observe but not treat me like an exhibit. He would not gape at me any more than he wanted climbers to gape at him. Pratt was all-seeing. He had only to glance at the seventeen-year-old Pat Ament to know I was a good person, however flawed, and that I was passionate about climbing. He could sort out the rough garbage in a person from what was right and true. He could sense the right proportions of those opposites, those contradictions. He saw people and what they felt. He knew how fragile life was, how any moment might turn dark, how one’s dreams could disappoint. Royal, a type of King Arthur, the sage Pratt was more of a Merlin of rock. Or Doc Holliday. Royal was Wyatt Earp, or should I say Ulysses?

Pratt carried in his soul a burden, an eternal sorrow. Already in his life, it seemed, a part of him was destroyed. I do not say I recognized all these wounds the day we met, but in time I would learn more. There seemed a tragic element to Pratt’s life he did not let the world or his friends in on. He had an amazing ability to climb. That mattered most to me at first. I would learn more of that ability as well, that gift, as time passed. Pratt and I would do quite a few climbs together and become good friends. He flourished in Yosemite, took to its exile. I saw a kindness in Chuck’s eyes in The Valley. The walls and forests were the perfect refuge. Blaise Pascal said that in a difficult time one should keep something beautiful in his heart. Pratt recognized beauty wherever it existed. Like Royal, Chuck loved classical music.

It was not possible for me to refuse a climb with so excellent a spirit as the friendly apotheosis Chuck Pratt. It made me happy when in the spring of 1968 he invited me to do one of his favorites, the North Wall of Sentinel—now known as the Steck-Salathé. I was excited to climb this classic—and with Pratt. He had not been up there in a while and needed another dose of that manner of magic. The seventeen-hundred feet or so of towering granite is full of rich history from the early days of Valley climbing. Pratt understood the role of the climb in the chronicles of Yosemite adventure. Fifty-one-year-old Swiss climber John Salathé, after he pioneered Yosemite’s Lost Arrow Chimney with Ax Nelson, teamed with twenty-four-year-old Allen Steck in July 1950 to make the first ascent of Sentinel in four and a half grueling, hot days. A shortage of water made those days tough. They had food for about two days—dried fruit, a can of tuna, assorted foodstuffs. With Salathé’s homemade pitons, and whatever pitons they could buy, they worked their way up the expanse of wall. Three years later, in 1953, the impetuous teen Royal Robbins, in company with equally jejune Don Wilson and Jerry Gallwas, made the route’s second ascent, in tennis shoes, in two days. Royal, at that time, pioneered the Narrows—a tight, dark crawl space high on the wall that allowed them to slither past—escape—the terrible exposure of one of Salathé’s bolt ladders.

Chuck was fond of the route for a number of reasons. He admired its continuous challenge. Each pitch, he said, had a personality and was a test in its own way. I had done the climb with Chris Fredericks my first trip to Yosemite four years earlier but was excited now to do the climb the right way. With Pratt, now, I would see the wall through the eyes of royalty.

(NOTE: this is the first half of the piece. To read the full story scoop up a copy of Volume 17, now available in print.)

You can read the second part of the piece here.