Cabin Fever and the Dawn Wall by Luke Mehall 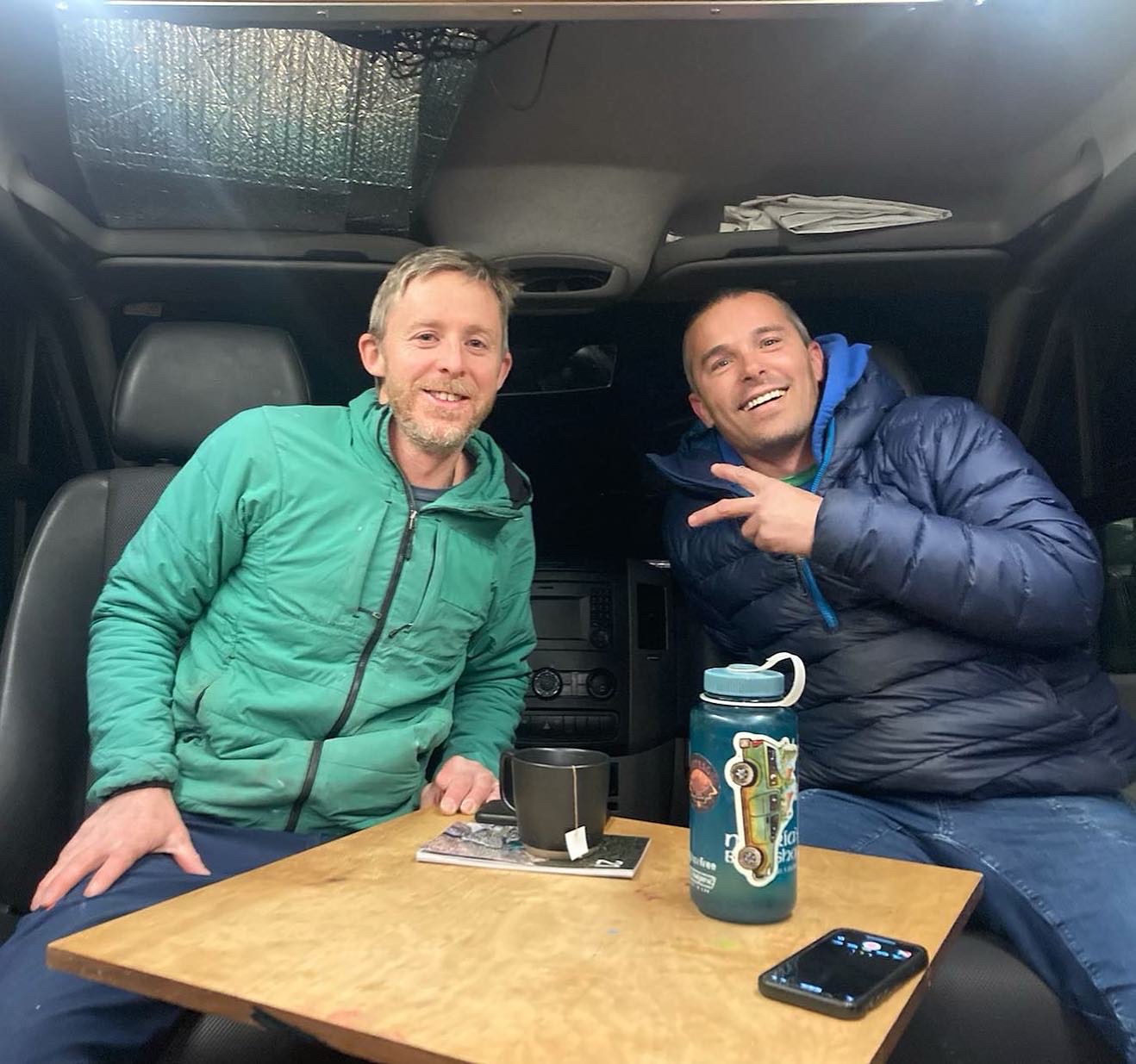 This winter I’ve had the fever. No, not the fever for more cowbell, or the fever from COVID (thankfully), but rather cabin fever.

Before COVID, I used to love working from home. After decades of service industry jobs, I was finally living the dream, and running my own publishing business. It was a perfect balance of solitude and engagement with the world.

These last two winters, that balance has been off. That new saying you’re not working from home, you’re living at work definitely has some truth to it. And with this winter in particular – living alone and being single – I’ve just simply had too much time at home. Luckily, as a writer and host of the “Dirtbag State of Mind” podcast, I’ve got the perfect excuse to hit the road: to interview some interesting people.

Early in the year, it seemed like every time I set up an interview it would get cancelled because of someone catching COVID or having an exposure. Finally, last weekend, I managed to record two successful interviews: one with Tommy Caldwell, the star of the “Dawn Wall” film, and one with Erik Murdock, of the Access Fund, which was responsible for a great deal of the advocacy and creation of Bears Ears National Monument.

My first stop was Gunnison to pick up my buddy Shaun, who was also in need of a road trip and some bro time. En route to Estes Park – where both Tommy and Erik live – we got caught in a whiteout snowstorm on Highway 285 as we descended into Denver. We watched cars skidding off the road, some going the opposite way that were unable to climb up the hill, leaving a mess for the tow truck drivers to clean up.

We arrived to Estes Park much later than we anticipated, and both Erik and Tommy were getting their afternoon exercise, so we had a late lunch as we marveled at the beauty of Estes, with snowy rocks and mountains all around.

As we finished lunch, we got ahold of Erik. In a crazy coincidence, Erik had rented a room to Shaun in Joshua Tree nearly 20 years ago, and they hadn’t seen each other since. Shaun had even helped Erik do some research on climber behavior in the park. The payment: Patagonia clothing that had been returned to the company and upcycled for compensation for his research. Unlike today, 20 years ago there wasn’t all that much money in the outdoor recreation world.

Erik had wanted to speak with me after listening to another interview I did with Durango hometown hero Chris Schulte. In the podcast episode, Chris spoke about the “Climb the Hill” event where climbers – led by the Access Fund and the American Alpine Club – go to Capitol Hill and meet with senators and members of congress to advocate for climbing and public lands. Chris and I also spoke about our mutual love for the land that is now Bears Ears National Monument. After listening, Erik asked me if I wanted to learn more about how the monument came to be.

Of course, the answer was yes.

Over the course of an hour, Erik told me the fascinating story of the work that the Access Fund, Bears Ears Inter-Tribal Coalition and other entities did to create Bears Ears. Erik even lived in Washington, D.C., while the monument designation was being drafted. Now more than five years later, and the monument designation restored, it appears as though the state of Utah is going to sue the federal government over this designation. This while Utah is also vying to get the Outdoor Retailer show back. (The show moved to Denver, specifically over the Bears Ears issue.) 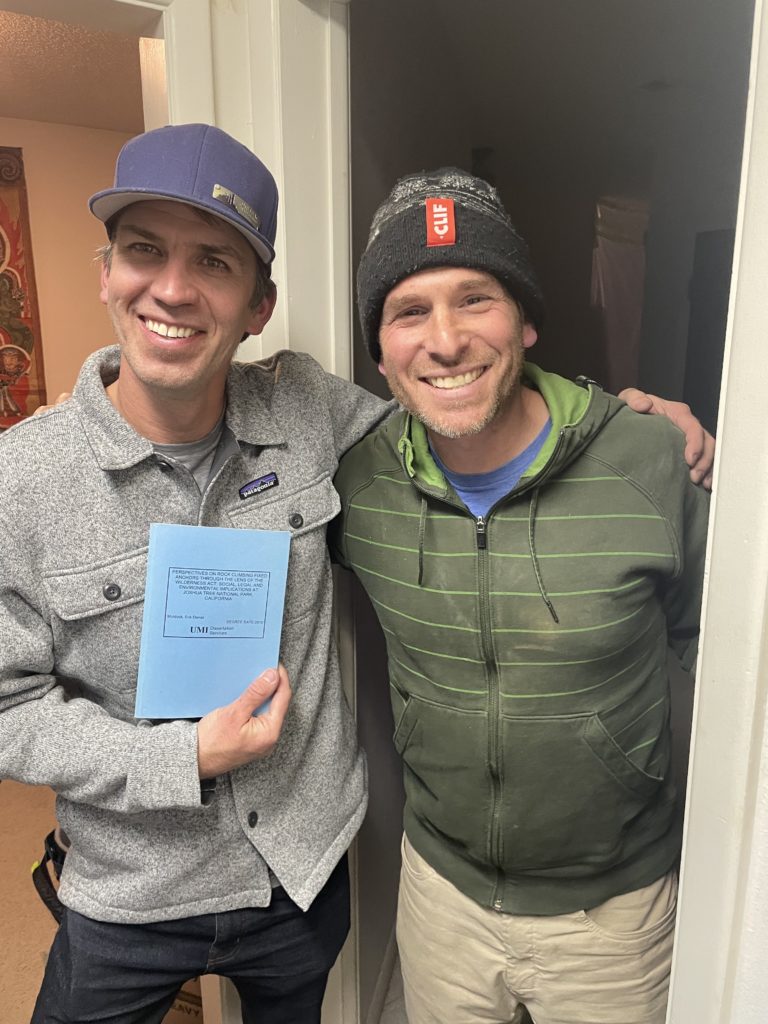 Shaun and Erik reuniting after nearly two decades, with the results of a study they worked on in Joshua Tree National Park, California.

My head was already spinning after this conversation, with so much information on policy and politics, but right after, I had to head up the road to interview Tommy Caldwell.

Tommy is the closest thing I have to a climbing hero, reaching international fame after he and his climbing partner, Kevin Jorgensen, were the first to successfully free-climb El Capitan’s 3,000-foot Dawn Wall in 2015. Since then, Tommy’s gone on to become a climate activist, using his fame for good.

I rarely get nervous for an interview, but I was nervous to interview Tommy, mostly because he has been interviewed a million times, and I felt pressure to come up with questions he hasn’t already been asked. Tommy has lived a life that sounds stranger than fiction. Born in Estes Park, he started climbing at 4 years old with his dad, and by 7, he had climbed Wyoming’s iconic Devils Tower, as well as routes in Yosemite. In 2000, while climbing in Kyrgyzstan, he and three other climbers were kidnapped by militant rebels, barely escaping with their lives after Tommy pushed their captor off a cliff. A couple years later, he cut off his index finger in a table saw accident, and when his doctor told him to forget about being a professional climber, he went on to become the best big wall climber of all time, culminating in the Dawn Wall.

There was simply too much in this conversation to summarize in this column, but the one topic that left me inspired was his take on climate change. Like many, climate change overwhelms me, and I often find myself thinking that it’s too big of a problem for me to do anything about. Tommy doesn’t think that way – his brain is wired to take on impossible challenges – and much of his day to day involves working toward solutions for this crisis.

“Climate advocacy feels a lot like my climbing challenges, except this work really matters, what’s more important than saving the world?” he said.

Sometimes a quote is all about who says it. When Tommy Caldwell speaks, the world listens. And Shaun and I had the pleasure to speak with perhaps the most optimistic realist in the world for an hour that day. It certainly helped cure my cabin fever, and reset my brain to start thinking more positively. I can’t wait to share these conversations with the world, soon enough.

This story was first published in the Durango Telegraph.

Support the Dirtbag State of Mind podcast on Patreon starting at $3: https://www.patreon.com/theclimbingzine