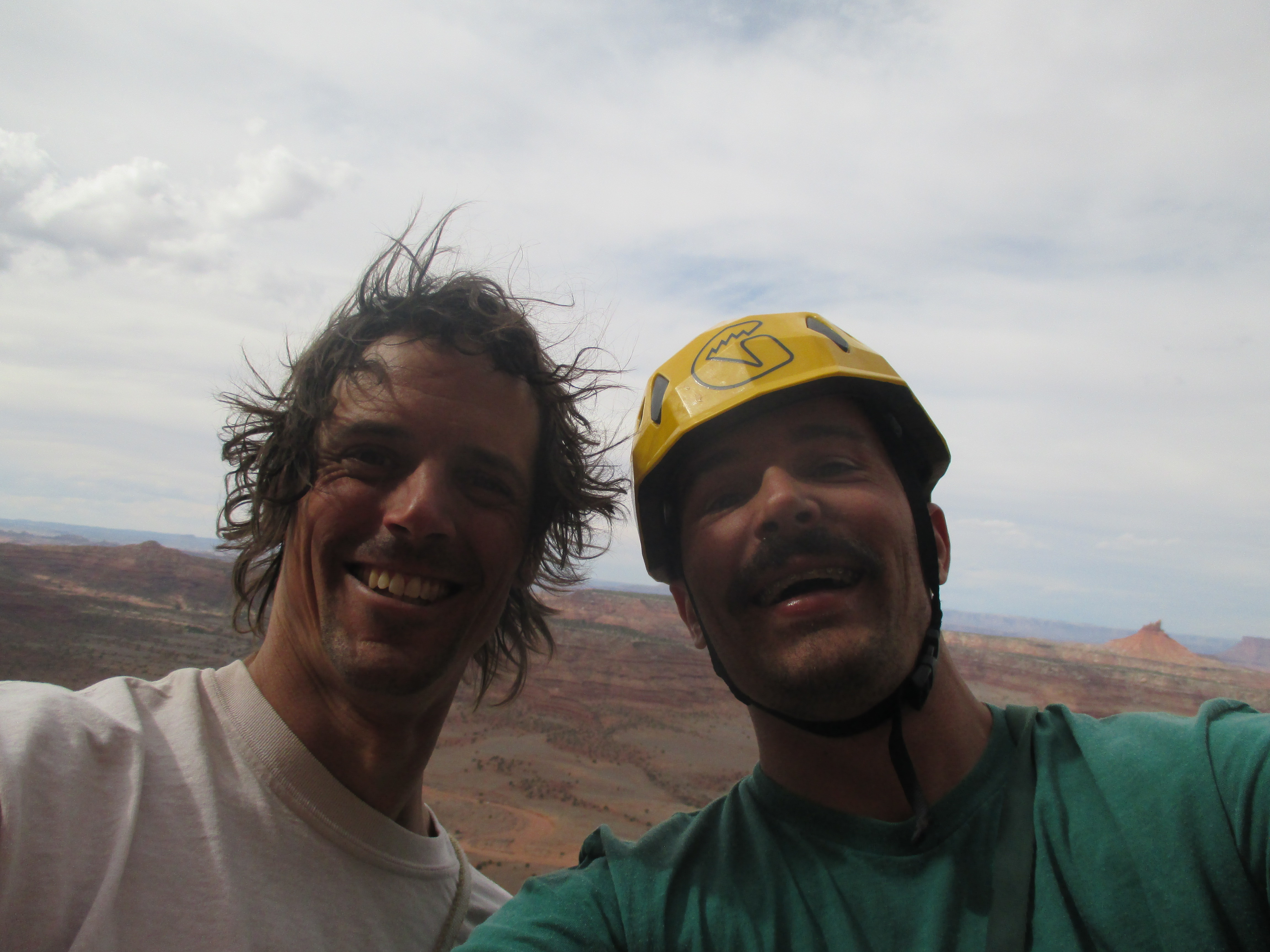 Standing there, gaping at this monstrous and inhuman spectacle of rock and cloud and sky and space, I feel a ridiculous greed and possessiveness come over me. I want to know it all, possess it all, embrace the entire scene intimately, deeply, totally, as a man desires a beautiful woman.

(Note: this piece is an excerpt from Mehall’s new book, The Desert.)

It was another dead end, but we shouldn’t have been surprised. The desert had been too good to us these last few years, more first ascents than I could count—all types of sizes and lengths—we even established a line that went all the way to the rim. They were the types of days that make me believe in climbing; the golden age is always at hand. If not elsewhere, at least in the desert it is.

That day it was just Dave and me. If there was any partner I’ve ever had for the desert that I was equal to in terms of abilities, it was Dave—that’s not a reason to choose a partner; it’s just how it was. I would have climbed with Dave on just about anything if he were a much better climber than me or even if he only climbed 5.10. We just happened to check in at the same level. We’d work the same projects together, and often, one of us would send just before the other, or vice versa.

To write any more without describing Dave’s stoke would be a mistake, because other than his sense of character—in my mind he defines what a climber is and what a climber should be—his stoke is what defines him. It’s the reason we call him 5.14 Gene, not because he climbs 5.14, although I know he could someday if he wanted to, but because that was a Halloween costume one year. He has a 5.14 level of stoke, and if 5.15 were around when he got that nickname, he would have been called 5.15 Gene. His call, and our call, can be heard in the desert in the form of “Unnnhhhhhhhh.”

Both Dave and I were far from stoked at this particular moment; this dream crack had dissipated into nothing, and we’d have to drill an anchor and rappel back down rather than taking this line all the way to the rim as we’d hoped. We’d been working on the climb for a couple days now. The first pitch, which we dubbed The Diva, was a forty-meter masterpiece—a few finger stacks but mostly thin hands for us, .75 and #1 Camalots. It was a dream and took virtually no cleaning.

For years, in Indian Creek, I’d embraced the communal nature of it, but the quiet days with just one or two partners, when we explored the forgotten corners, these were my absolute favorite days of all time. For the last couple years, there had been a lot of these days; in fact, my entire life was now planned around them.

The Diva crack was one of the finest. Five stars out of five, for sure. That day after establishing it, Dave free climbed the first pitch, in perfect style, and he sent me up on the second pitch. The second pitch was a fifty-or-so-foot chimney off-width. It wasn’t terribly difficult, probably 5.10. I belayed Dave up with hopes that we’d have one more pitch at the top of the formation, and we’d have a rim route, a rarity in this day and age in the cragging mecca that is The Creek. Once Dave reached my perch, I climbed up and down and around and didn’t find a crack that went to the top, just disappointing seams that didn’t want to be climbed.

Disappointed, we had no other option than to place a bolted anchor and go back down. I got the power drill out of the small pack we’d carried along and began to drill a hole. I got about an inch in, and then it just stopped. Dead. The batteries had no more juice. We both probably yelled some expletives and then laughed at ourselves. How were we getting out of this one?

We should have also had a hand drill, but we didn’t. We scoped around some more and confirmed the notion that there were no natural anchors, no trees or big boulders. There were a couple cracks we could leave some cams in, but if there’s one thing a climber hates to do, it’s to leave behind cams. It’s not just the value; there’s something about a climber’s pride that we don’t want to leave them behind unless someone’s life is on the line.

And that was certainly not the case. We were alive and mostly happy. It was a stunning spring day, blue skies, red rocks, the usual in the desert—beautiful but usual, no impending doom. I can’t remember which one of us came up with the idea, but we ended up deciding to just downclimb the pitch. I rappelled down on a gear anchor and placed cams for Dave so that he could clip into them when he was downclimbing. I reached our original anchor and then put Dave on belay. I was thinking about how scary that probably was, heading down a brand-new off-width pitch in Indian Creek, sand and loose rock and all.

Dave’s feet peered over the edge first and sent down some debris. I looked down slightly so the rocks would hit my helmet and not my face and then looked back up. “How you doing, brother?”

He was fine. He wormed his way down the crack, dust now covering him from head to toe, and removed the cams one by one as he went. He clipped back into our anchor, and then we rappelled down The Diva, back to this formation we were calling Beyoncé’s Balcony.

Beyoncé’s Balcony was this perch about thirty feet off the ground where The Diva began. It was twenty feet long and probably two feet wide and overlooked the Six-Shooters and the vast desert that leads into Canyonlands. It was a glorious place to be. Though it was only midafternoon, we cracked beers (we’d earned them) and sat around, basking in the awesomeness that is living in the moment in the desert.

We were calling this wall the Beyoncé Wall, thus The Diva and the Balcony, etc. Someday, I think there will be a study of how Americans named routes and how they corresponded with certain eras. In the beginning days of American climbing, the names seemed elegant, often just corresponding with the aspect the wall faces, take the Northeast Buttress of the Higher Cathedral in Yosemite. What a proper name.

But at some point, most likely when sport climbing came around, many routes had the most ridiculous names, like the types of phrases you’d hear in dick jokes and such. My point here is that male chauvinism dominated the climbing scene for quite a while and still does in many ways, especially amongst those bolting new routes. The other side of that is you don’t have many walls or routes named after strong, independent women. And that’s why we wanted a Beyoncé Wall.

In the process of our finds and developing these new walls, they started to catch on in popularity. It was all word of mouth, and almost entirely friends of friends, but at this point, after climbing in Indian Creek for nearly two decades, almost everyone was a friend of a friend. That’s not completely true though, because Indian Creek was absolutely exploding in popularity, and so was climbing in general. Most started like I did back in the day—in a gym, and then they were unleashed into the wild by the hundreds. Every season, the place got more popular, and every season there were more climbers there.

My paranoia about the new walls being overcrowded was probably completely unfounded, that first ascent paranoia that some of us new routers suffer from. There was no denying I was greedy; I wanted all the first ascents I could get. Still, the reality is hundreds of climbers had already been to our “secret” wall, and 99.9 percent never put up any new routes.

This piece is an excerpt from Luke Mehall’s new book, The Desert, now available.