How did two guys from Great Britain, a place that doesn’t really have off-widths, go over and climb the hardest off-widths in the United States? The film Wide Boyz, delivers the answer, while analyzing the psyche of the two climbers, Pete Whittaker and Tom Randall, and providing a whole bunch of inspiration along the way.

I have to admit that I am a picky and critical viewer of climbing films. A lot of modern films don’t have much of a story line, and are hard to relate to. Wide Boyz is not the case, this is the most inspirational and motiving climbing film I’ve seen in a long time.

Wide Boyz is all about training and obsession, suffering for a dream to come true. After Whittaker and Randall decided they wanted to try Century Crack, a previously unclimbed off-width, located in Canyonlands National Park, Utah, they developed a series of training cracks in Randall’s basement. Coined “The Cellar” the footage of these boys hard at work training, shows just exactly how motivated and determined that these guys are. What is equally as impressive to their training is how much they love it, there is an abundant amount of smiles and laughter coming from this duo at all points in the film.

When the Wide Boyz arrived in the United States in the fall of 2011 they realized their “Cellar” training paid off with repeats of some of the hardest off-widths in Vedauwoo, Zion, and Indian Creek. Whittaker even managed to onsight Belly Full of Bad Berries (5.13) at The Creek! Eventually they found their way to Century Crack (5.14), and managed to send the route, with pre-placed gear. While sometimes in climbing films it’s hard to grasp just how hard a climb is, this is not the case with Century Crack; it looks like the hardest off-width in the world, and it is. 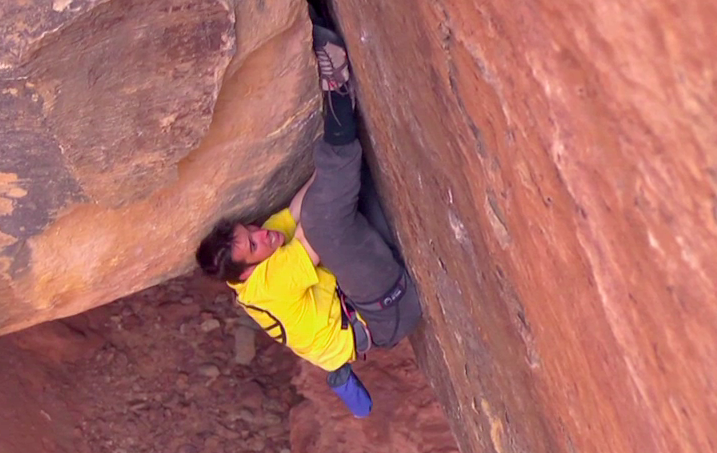 After Randall and Whittaker first climbed Century Crack there was a lot of backlash for their style, with several notable traditional climbers saying it wasn’t a true ascent because they did it with pre-placed gear. So, at the end of the trip they made their way back to Century Crack, placing their own cams, in a dangerous and runout effort, going light on protection and heavy on bravery.

Wide Boyz is a must see for any climber, and is endlessly entertaining. Some of the greatest comic relief comes from Randall’s wife, Kim, who describes having company over while Tom and Pete are downstairs grunting and screaming in The Cellar.

All in all Wide Boyz is a classic, and if you’re looking for some motivation to train this winter this is one to watch over and over again. I suspect Wide Boyz might lure one or two climbers to enter the wide, world of off-widths.

Review by Luke Mehall, publisher of The Climbing Zine, and author of Climbing Out of Bed, available as an e-book on Kindle and Nook.